What should Uchikoshi do? Thoughts on how to save Zero Escape

Kotaro Uchikoshi, the director of Virtue's Last Reward, took to Twitter to tell his Western fans that the third game in the Zero Escape franchise would not be forthcoming any time soon. What should he do to remedy that?
Christian Nutt
Blogger
February 17, 2014

This past Thursday, Kotaro Uchikoshi, the director of Virtue's Last Reward and 999: Nine Hours, Nine Persons, Nine Doors, took to Twitter to tell his Western fans that the third game in the Zero Escape franchise would not be forthcoming any time soon.

The non-announcement of a game? It's an unusual move.

It's a step Uchikoshi apparently felt pressed to take because the series has a lot of fans in the West, who've been waiting for news about a third game. If you've played Virtue's Last Reward, you know it's clearly the middle of a trilogy; it sets up a sequel, and its ending opens as many questions as it answers.

Essentially, the problem is this: The Zero Escape games have not been profitable in Japan despite their popularity in the West, and consequently he can't get funding from his Japanese publisher Spike Chunsoft (which is also the game's developer and his employer.)

There's a lot we don't know about why this is, and these are questions only Uchikoshi or Spike Chunsoft can answer. The thing is, I care a lot about this -- so much so I can't just let it go.

Virtue's Last Reward is my favorite game of the last several years. I will not shut up about how good it is -- not just because I love it, but because I think it's a game that deserves to be examined by developers thanks to its innovation in narrative game design, which is why I wrote this article. I truly believe it's the best-made narrative-focused game I've ever played, because it makes the telling of the story absolutely core to the design of its gameplay in a way I've never experienced in any other game.

I also have a fairly decent understanding of how the Japanese game industry works, for a Westerner who's never worked in it, because it matters to me, too. For outsiders, it's quite difficult to understand -- but like any system, there's an inner logic to it once you begin to take a look at it, and that's why I don't find this story all that surprising, just sad.

"The managers know that ZE series is especially valued by many users outside Japan," Uchikoshi tweeted. "But, 'in Japan', 999 and VLR are in the red. They are not selling more than people think."

That's the real crux of the "Japan problem" here -- if the game doesn't pay in its domestic market, it's not going to get made, at least not in a conventional way, the way the first two were.

I can't accept the death of this franchise for emotional reasons, either. The thing you have to understand about the Zero Escape games -- 999 and VLR -- is that they're like the first two books in a trilogy, or the first two seasons of a TV series. Fans are freaking out because it's like hearing Breaking Bad got cancelled after a couple of seasons, or the last Hunger Games book is never coming out. It's like Firefly all over again, to put it in geek TV terms.

Even though I understand the complexities of the situation, and even though I am acutely aware of the existence of other complexities that I have no knowledge of (for example, internal politics at Spike Chunsoft, which undoubtedly exist but to which I cannot speak) I'm still gonna tilt at this windmill.

After all, Uchikoshi wanted to let the fans know what's going on, sure. But he's a subtle thinker. I'm sure there's an ulterior motive here -- most likely drumming up support for the franchise he can take back to his bosses to shore up his case for a new game.

With that in mind, you'll find below my thoughts on what I think Uchikoshi should try to do to save Zero Escape 3.

Strip down the production values

Ironically, the series may be a victim of its own success.

The first game was an extremely simple, low-budget DS game, fully in 2D (with pre-rendered backdrops.) The second game is fully 3D, with pervasive voice acting. The leap between the two is absolutely huge (I played them back-to-back, so it was particularly noticeable.) It's like going from an early PlayStation 1 game to a late PlayStation 2 game.

The story goes like this: Though a flop in Japan, 999 was an unexpectedly big hit in the West; it seems likely Virtue's Last Reward got a significant budget increase thanks to its Japanese publisher seeing the potential to grow the franchise's audience.

Sadly, that may be what's killing it now.

VLR's 3D upgrade includes its backdrops (now realtime) and its characters, including not just models but also animations. It also adds a shedload of voice acting, which was completely absent from the original game -- which was no less emotionally affective, thanks to the quality of Uchikoshi's storytelling, mind you. 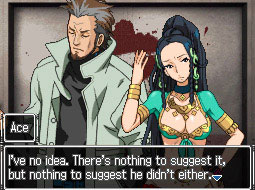 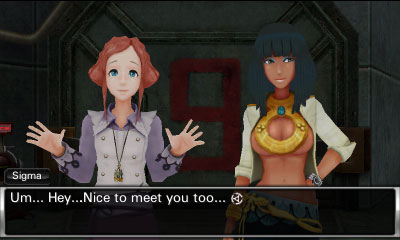 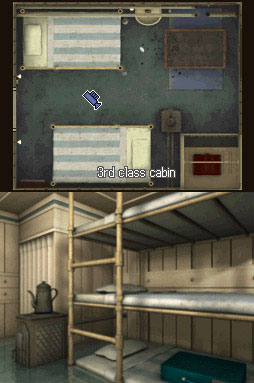 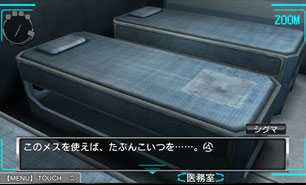 I can't say for sure if Uchikoshi considered scaling back, but it seems so obvious it's hard to imagine that he didn't. Lose the expensive 3D models, lose the voice acting, and pull the game back into a budget commensurate to its marketability.

There's actually a couple of good templates for this. In Japan, Spike Chunsoft released an iOS port of the first game (more on this later) which, while an obvious compromise on budget vs. quality, really works out well, visually: 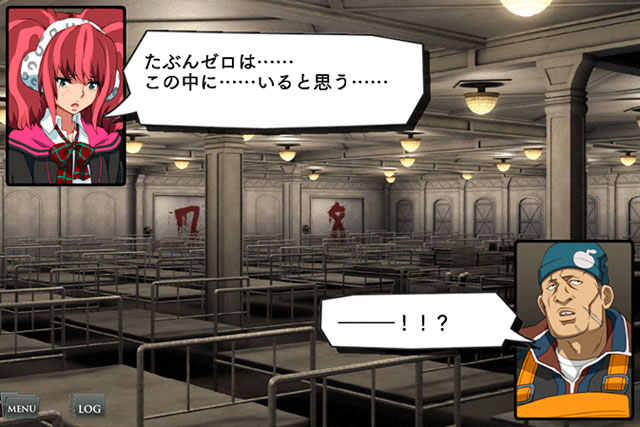 There's also the company's other notable visual novel series, Dangan Ronpa, which works within a small budget to provide a big visual punch thanks not to budget, but to an emphasis on style while working within serious constraints. For example, the characters are 2D cutouts with thick black shadows to make them stand out against the game's snazzy pop art environments, among other brave stylistic choices. 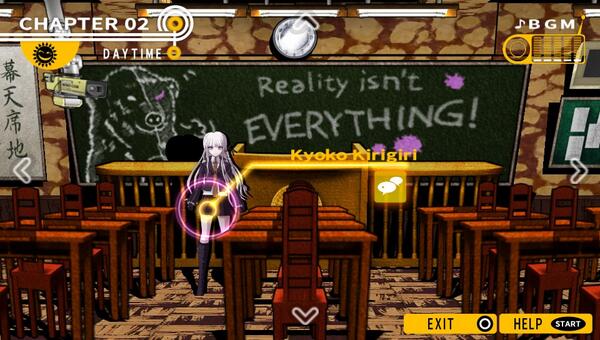 Dangan Ronpa and Virtue's Last Reward are both available on the PlayStation Vita (though their original target platforms are respectively PSP and Nintendo 3DS.) I obviously can't exactly weigh them and see how much money was spent on each, but at an educated, offhand guess, VLR was the more expensive game. Even without cutting things all the way back, there is fat to trim from the budget.

And if Christine Love can make critically acclaimed, successful visual novels largely on her own, well...

Move the series away from where it is, to where it can be more successful

The PlayStation Vita and 3DS are lovely platforms for visual novels and have receptive audiences. However, a lot of people who might be interested in these games (particularly adventure game fans who want to branch out to critically acclaimed Japanese titles that might scratch their itch) can't access them there.

The first two Zero Escape games need to come to PC and tablets.

Again, Christine Love has made a notable success selling visual novels on PC. Telltale has had great success with its adventure games outside of the console space, too, and if a fraction of The Walking Dead's audience were curious about these games, that would mean a lot of sales. There are even successful tablet-only adventure games, like The Room. This seems like a no-brainer.

Plenty of people I have spoken to about these games have told me they sound interesting when I talk about them, but that they don't really play handheld games. That's their loss, I say, but when you're trying to make a success of your game, you can't have that attitude.

In fact, Spike Chunsoft did port 999 to iOS, but for some inexplicable reason removed all of the puzzle-solving gameplay sequences from the title, leaving just the text-based novel bits. This version has not been localized into English -- nor should it, until it's made whole. You can try and infer the logic of this move, but in the end it doesn't make much sense. But the iOS version looks good, and could also serve as the basis of a PC port -- but only if it's complete.

Building up renewed interest in the first two games in the franchise would only make the greenlighting of a third project that much more likely.

Cooperate within his own company

As with other Japanese companies, the contraction of the market means that publisher/developer Spike Chunsoft is the product of a merger between two formerly separate entities, like Bandai Namco and Square Enix.

I don't know much about the company's culture, but I do know that these mergers tend to result in a lot of factionalism. It took years before Square development staff worked on a major Dragon Quest game, and just as many years before an Enix creative lead worked on a major Final Fantasy title. I've heard that Bandai Namco is even less "together."

And I've heard that a similar situation persists at Spike Chunsoft.

If Uchikoshi, who comes from the Chunsoft side of the equation, wants to get the Spike people on board -- as is likely necessary to keep the series alive -- he needs to become a bridge-builder. Now, I have no idea what he's already done or how possible this is, but here's one idea:

He could offer to adopt the production techniques and the engine used for the Dangan Ronpa games, which come from the Spike side. It's a thought, and again I'll admit I'm not aware how feasible it would be -- but I do know that the engine could already support the design of a compelling Zero Escape game, and certainly supporting only one set of tools and tech would reduce costs.

I had a chance to speak to Yoshinori Terasawa, the producer of Dangan Ronpa, last week. The company knew that visual novels were on the down-trend, popularity-wise, so the team got radical with its game design and visual style. Uchikoshi may have to appeal to his bosses at Spike Chunsoft by doing the same if he wants to get Zero Escape 3 made.

The good news? Dangan Ronpa is enough of a hit that the game was repeatedly ported to other systems, has a sequel in production now, and even spawned an anime series.

Uchikoshi's tweets suggest that if he had external funding, the game could get made. He seems hesitant, however, to go to Kickstarter -- though with a passionate fan base, I don't think he should be.

"Although we also examined crowd-funding like Kick Starter, we figured the idea is not quite persuasive enough…" he wrote Thursday, followed by "About Kickstarter. It seems that Japanese can't be a presenter. Is that right?" on Friday, so clearly he's considering the idea.

I think he should go for it, but not without some serious consideration, namely:

There's a lot more to a Kickstarter than this, but when you have publisher backing, I think transparency is especially crucial. I think this could work, but it's particularly difficult for Japanese creators to have the openness that's required to make it work.


On Friday, Yasumi Matsuno, creator of Final Fantasy Tactics, barely made his goal for new game Unsung Story. There are a lot of problems with that campaign, not all of which were directly his fault. Yet examining this campaign would be instructive, because it is almost a textbook example of how to fail at transparency and clarity.

Just as we often can't understand the Japanese industry, the Japanese can have issues understanding Westerners. For a Kickstarter to work, Uchikoshi would need allies in the West to help him out.

Go to another publisher