Using Plague to spread the word about video games

I like to get in on the ground floor when it comes to promising new social media outlets. That's why I recently started experimenting with Plague, a mobile-based social network that launched in November.
Mike Rose
Blogger
January 07, 2015

I like to get in on the ground floor when it comes to promising new social media outlets, especially if I think they may be valuable to my work in the future. That's why I recently started experimenting with Plague, a mobile-based social network that launched in November.

The app had been available for less than a month when I started using it, and already it had a hefty number of users, as far as I could tell -- it sounds like the holiday period was kind to it in terms of downloads and users too. What I wanted to know was whether I could use it for spreading the word about vidja games.

Plague is a social media network based around the idea of spreading information with nearby people, as the name might suggest. You post a message, video, link or image, and the closest four people to you currently using the app will receive your posting when they are scrolling through their current messages.

At this point, they can then choose to either kill the message dead by swiping down, or spread it further by swiping up. If they spread it further, the closest four people to them will see your message, and can choose to spread it to the four closest to them... and so on and so forth. In this way, your message can potentially be seen by thousands of people if enough people keep spreading it around the world.

For each of our messages, you can see exactly where it has been read via red pulses on a map, and you can see how many people have read your message overall, and how many of them spread it on. You can also see the top "power users" who spread your message -- these are people who have been using Plague for a while, and are now more influential.

The more stuff you spread, and the further it spreads, the higher your "Influence Index" will go. This determines how many people originally see your message - you start with a spread power of 4, but that goes up as you use Plague. Right now I have an Influence Index of 170, which means that 8 people see my message when I post it.

It's a really interesting concept in motion, and really rather addictive - you can sit for hours just swiping messages up and down without much effort, and trying to think up interesting messages that you think will spread around the world is great fun.

How does it look in action?

On my first day using Plague, I got incredibly lucky and managed to make a message go viral, boosting my Infection Index dramatically. Let me show you what that looks like -- below you'll see my message that went viral, and several shots of the Infection Map so you can see how it spreads. 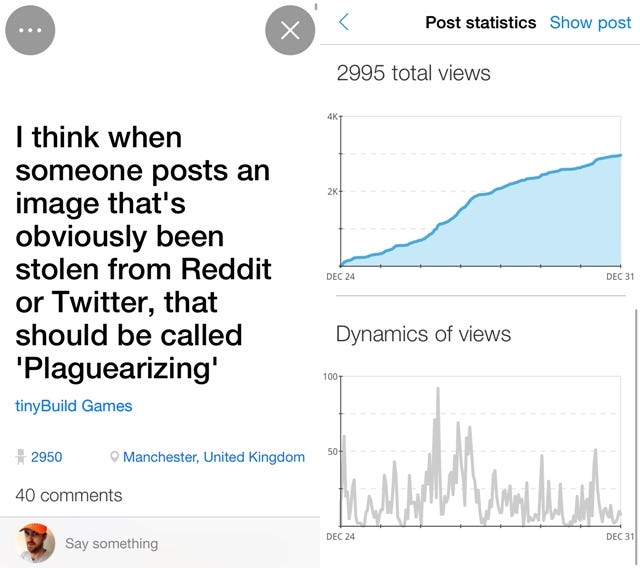 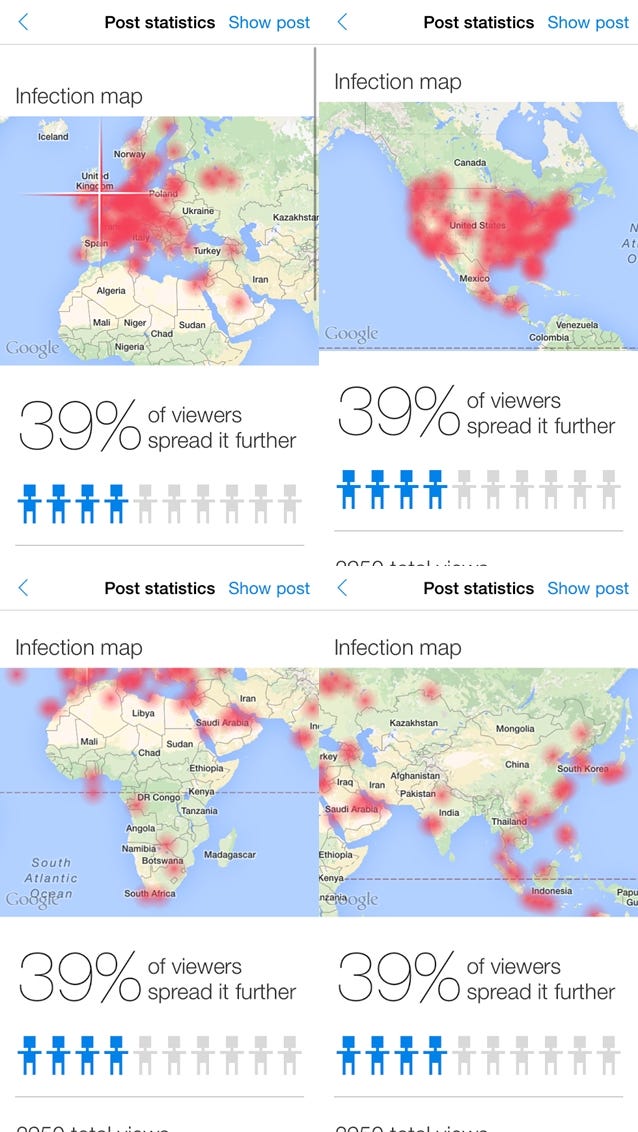 It's fairly simple to read and understand, and "playing the game" is relatively fun, especially if you do manage to post a message that spreads worldwide.

Does it work as a social media outlet for game developers?

I decided to see whether I could get much traction on Plague with messages, links and images about my studio tinyBuild.

There's a key element to note about Plague from the get-go -- you have no "followers" or username, or real profile as such. If someone pokes your name, they'll find your current name and your Infection Index, but you can't follow them or keep tabs on them. You can also change your name at any point, and two people can have the same names. So there's no way to build up a presence as such on Plague -- well, unless people just keep spotting your messages on there randomly.

As such, I couldn't use tinyBuild's or my own current social media clout to start us off with a good strong base to work from -- everyone starts on the same peg, and apart from the Infection Index, you never really can become popular on Plague.

Forunately, since I'd managed to get one viral message and couple of other messages that spread into the hundreds, I started off my tinyBuild campaign with a decent Infection Index already in the bank. Up to now, I've been attempting three different strategies:

1. Posting Steam codes for our games for people to take and pass on
2. Posting general information about tinyBuild and our games
3. Posting the trailer for our new game BOID

Note that I've only been doing this for a few weeks, and I plan to continue doing so in the coming weeks and months as more and more Plague users come onboard, but I thought it might be useful to show you my initial findings in each case.

1. Posting Steam codes for our games for people to take and pass on

Due to the nature of Plague, this method doesn't work as well as hoped. The problem, as you might guess, is that people aren't so keen to spread Steam codes if they want to grab them for themselves -- plus, if they try to grab all the Steam codes you put in a message and they are all already taken, there's no reason to spread the message on.

The highest score I managed for one of these messages was 35 spread, which isn't terrible, but isn't good either. I was sharing around 3 codes at a time, so I may try this again but with more codes, so that people might have more of an inclination to spread the message so more people can use all the codes.

2. Posting general information about tinyBuild and our games

This worked fairly well if you worded it correctly. Pro-tip for Plague: Do not ask people to swipe up. It turns out that people don't like being told what to do!

The messages that reached the most people were the ones in which I worded it such that it read like a personal message to Plague users, rather than a PR stunt or a copy/paste block of text.

Images about games didn't seem to do very well either, although I didn't try so many in this form, so I'll have to throw a few more images in in future to see the sorts of spreads I receive.

3. Posting the trailer for our new game BOID

This one worked the best, especially when worded in such a way that I was asking Plague users for a favor. Posting a link to the BOID trailer, with a block of text that read along the lines of "the game is out soon, please let us know what you think!" all did consistently well, spreading to over a hundred people in total.

Note that you can potentially post the same message/link multiple times, and as long as you spread it out over days, no-one seems to notice, since they can't go to your profile and see that you've already posted something before.

Overall, considering that I managed to get the word out about tinyBuild and our games to a few hundred people via just a handful of quick messages, and considering that Plague has only been around for less than two months, I'm fairly happy with how much traction my messages have been getting.

Clearly there are some angles that work better than others, and I plan to continue experimenting with that. On BOID launch day, for example, I'm hoping that putting up a few messages about the launch, and giving away a bunch of free copies of the game, will get people to go check it out.