Learn about the strategy of asking questions on Twitter to increase visibility and engagement while organically networking.
Game Developer
Staff
June 16, 2020

Marketing your own game is a daunting task. Even if everything goes well, it's a lot of time and work outside of your project. Thus, the indie space is filled with a cacophony of advice noise telling developers to do a laundry list of tasks and how to do them. But with so many sources and potentially contradictory information, how do we know which pieces of advice are worth our valuable time?

QAG always has an ear to the ground for such emerging advice and what information is finding its way into the conversation. Not only that, but we can take what we feel are the best ideas and vet them for you.

Blue Goo Games, the team behind Space Chef, published a Devlog on YouTube in April that shares 50 tips for growing your Twitter following as an indie dev. We took a look at one of the simplest methods they shared: asking questions.

This tactic sounds easy enough, so we spent time every day looking for the right types of posts and commenting genuine questions about the studio or product featured in the posts.

What is a "relevant, comment-worthy post," though? Try to find posts with content that you are genuinely interested in, and you'd like to know more about. Is there something you would like to know about a gameplay clip? Are you curious about how a model was made? Maybe you are interested in the shown UI or the unexpected way a genre was used.

Here are a few examples of questions we asked other game developers about their project - including one from Blue Goo Games, the company whose advice we are testing!

Intelligent, real questions that span a variety of inquiries are going to get you the best results and can provide valuable feedback or ideas to the post’s owner, which is always appreciated. Try to stay away from posts that are clearly meant for one-way communication, such as retweets, posts made primarily of hashtags, and bot-driven pages.

We offered this type of comment 98 times in May, and this is what we found: 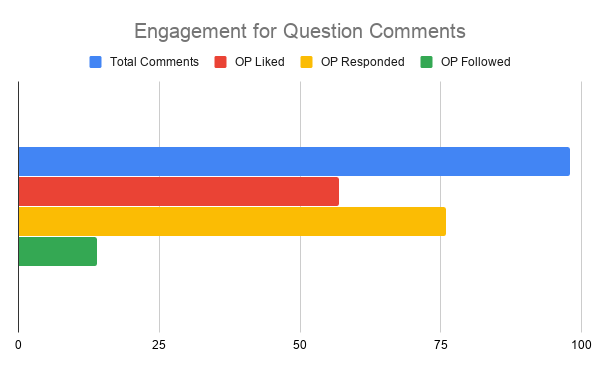 We were engaged in other new marketing activities at the time, so we aren't able to draw definite conclusions about how this method directly affected our impressions and profile visits. However, we do know that making the change to asking questions ballooned our mentions and certainly made us more visible to other, similar communities.

We know that asking a question in your comments can drastically increase the engagement and visibility of this kind of post, but what makes a post a strong candidate for you to engage with? We found that the best engagement came from pages similar to ours and from posts that we were able to ask meaningful questions on.

It should be noted that we had a negligible return across the board on any posts where the owner was a content creator. This does not mean creators aren't a group you want to be interacting with on Twitter, but that creators may not respond to the same methods game developers do.

*This statistic is skewed down as a result of us engaging with some pages multiple times. When we correct for the number of unique pages engaged with, the follow-rate goes up to 16%.