Over the past few years, I’ve worked in various capacity adapting media from one form to another. Whether it’s storyboarding Halo: Nightfall, providing artwork for How to Train Your Dragon comics, or game designing Magic Mike: The Moves, adapting the Channing Tatum male stripper movie into a mobile game (yes, that’s real and available on app stores in UK and Ireland).

Throughout these projects, I have developed two core principles that help a project feel true to the source material: Character Consistency and Continuity of Design.

As a case study, I’m writing about these principles in relation to my current game design project; adapting Jennifer Wilde, the award-winning comic book series, into a Point & Click adventure game. For more details on the project, you can watch the trailer and play the demo on our kickstarter page.

With script duties handled by the original writer, Jennifer's dialogue is true to her character.

Challenge: Keeping true to the original characters. This applies to both opinion of both the licensor, and original fanbase.

Solution: Our first priority was to involve the original creative team, so our adaptation would be consistent with their vision. From an art standpoint this wasn’t difficult, as I had experience drawing the original comicbook, and had a specific, approved, visual sense of the characters.

From a character perspective, we were luckily enough to have original comic writer, Maura McHugh join the team, to provide the script for the game. For us, Maura was essential in capturing the spirit of the characters, and a great sounding board for story-based game design.

Rob Curley, publisher of the comic, is involved as a producer and will make sure we don’t stray too far from his creation.

What worked: We were able to accurately capture the feel of the characters. Maura’s script was consistent with the voices the fanbase had come to know, and her understanding of the characters meant there were no missteps in the approval process.

What didn’t: Workflow took some adjustment, as character and game design often cross over quite significantly in the adventure game format. We eventually settled into a process where I would design a scene with very badly written dialogue, and Maura would come in to rescript, and provide feedback on character motives and interactions, tweaking as necessary. 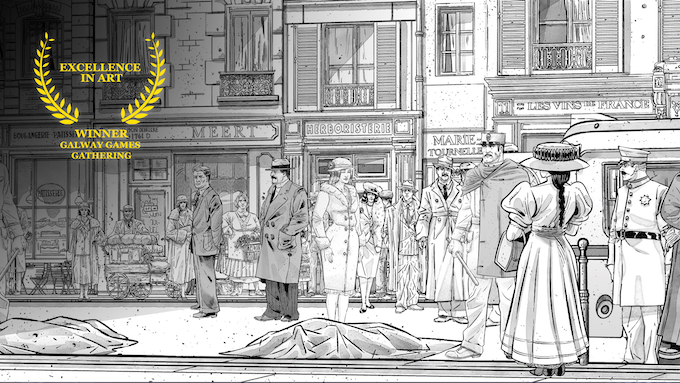 Our comic-styled artwork, not only stays true to the source material, but has already won an award.

Challenge: Provide a consistent aesthetic, recognisable to the comic audience, and approved by the licensor.

Solution: Rather than adapt the characters into a standard 3D art style, or a familiar 2d game style like pixel art, we chose a stylised art direction that would translate the style of the comic as accurately as possible to the screen.

Although I had worked on the comic, my game design role kept me from directly producing many art assets for the game. I recruited artist and animator John McFarlane, based on his comic book work, and knew his style would be perfect for the project.

The comic was printed in a glorious black & White format, with inked linework and a greytone wash. We used this same style on screen, and fans of the comic have commented on how recognisable the characters and scenes are from the comic. Although the original comic was drawn on paper, we are able to reproduce the artstyle by hand-drawing the characters and backgrounds using comic drawing software Manga Studio, primarily a comic drawing software.

What worked: The game is instantly recognisable to fans of the comic, and has already won an Excellence in Art Award.

What Didn’t: Such detailed, layered artwork and animation is more time consuming that a simpler, cartoonier style would be. With time intensive labour, we’ve turned to Kickstarter to raise funds to complete the game. 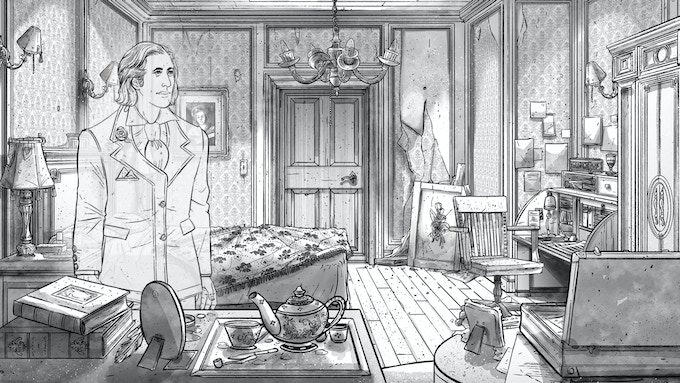 Solving mysteries with the ghost of Oscar Wilde. What more could you ask for in a game?

Including the original creative team and using a comic-inspired art style resulted in positive feedback from fans of the original comic fans. They noted how familiar the characters and settings feel.

Likewise, players unfamiliar with the series indicated they feel the game works as a standalone game, and response to the comic-inspired artwork has been extremely positive, with players noting in looks unique in a crowded market.

Jennifer Wilde is a project the entire team is really excited about. If you’ve like the look of the project, I feel obliged to mention we are currently running a Kickstarter to complete the game.