The State of the Algorithm: What's Happening to Indies on Steam?

The business of making indie games has always been difficult, but recently it's become a lot harder. On October 5th, Valve introduced changes to Steam's algorithms that resulted in less traffic to many games that aren't top sellers.
Erik Johnson
Blogger
January 29, 2019

The business of making indie games has always been difficult, but recently it's become a lot harder. On October 5th, Valve introduced changes to Steam's algorithms that resulted in less traffic to many games that aren't top sellers. This is hurting indie developers now, and I think we are only just beginning to feel the impact.

You may have heard about Steam's "October Bug," and you may have heard that the bug was fixed. But the situation is more complex than that. Unfortunately, there is no way for anyone outside of Valve to know exactly what is going on; the data just isn't available. But I've done my best to piece together an explanation. The timeline, as I understand it, is: 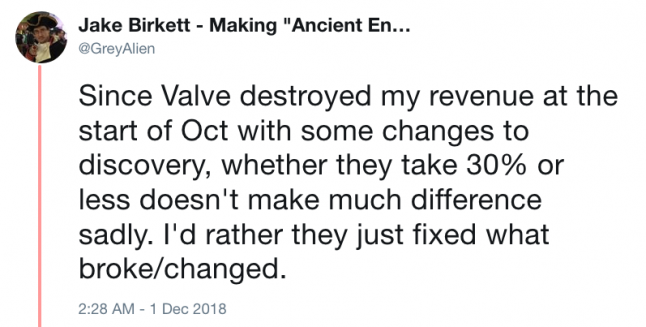 Valve wants to show people games they will like. They note in their news update that sometimes when they work on their algorithms some games will see less traffic and some games will see more. But crucially, I think what happened to the Discovery Queue traffic is a much broader change. It seems like games that are not currently in the top sellers are no longer being considered for a certain class of visibility. This is not a matter of a few games winning and a few games losing. Instead, less traffic is now being sent to a vast number of games that are not meeting some unknown day-to-day revenue threshold.

It seems that the October changes are impacting the Discovery Queue and the Main Cluster. The algorithm is now giving game revenue more consideration when making recommendations. As a result, tag similarity is now less of a factor in the suggestions you see on Steam.

Valve told us what happened with the More Like This widget, but they were silent on the topic of the Discovery Queue and Main Capsule traffic. It's not clear what the relationship is between the More Like This bug and the change to these other systems. We only know that they happened at the same time. It's possible that the traffic changes are another side effect of the same bug, and Valve just hasn't noticed. Or maybe they intentionally changed these recommendation systems towards showing top-selling games more often. Either way, it seems that this is the new normal.

Why This is a Big Deal

In September of 2014, Valve rolled out the Discovery Update to Steam. To adapt the store to the rapidly rising number of games being added, they made a major effort to personalize the store page and to try to show users games they might be interested in. These changes, along with the Discovery 2.0 update introduced in Nov 2016, have done a remarkable job of showing users interesting games they would not have seen otherwise. Compared with the digital shops for mobile and console games, Steam shows a more diverse and interesting set of games. In fact, I believe Valve's discovery efforts have been the major force mitigating the "indiepocalypse" that everyone has been worrying about for the past five years. 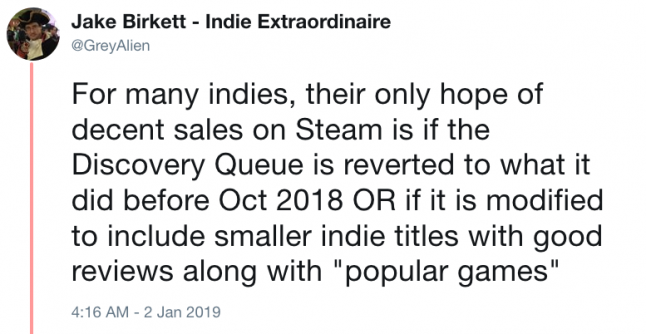 So a shift in the algorithm towards more popular and top-selling games is a big deal. For niche games, Discovery Queue traffic is some of the most important traffic on Steam. One thing that makes it so important is that people exploring their Discovery Queue are literally looking to find new games. If anyone on Steam wants to see games they are unfamiliar with, then it is Discovery Queue users.

Another factor is that the Discovery Queue responds to increased sales by delivering additional traffic. Lars Doucet documented the positive feedback effects that Steam's systems delivered when TotalBiscuit covered Defender's Quest. These systems result in an amplification effect on the marketing efforts a developer can deliver, making these efforts far more successful than they would be on their own.

Finally, one of the most important features of the Discovery Queue is that during the past few major sales, Valve has offered trading cards as a reward for users exploring their queue. Most games never get featured by Valve during a sale, so the increased Discovery Queue traffic has been a vital source of sale visibility. 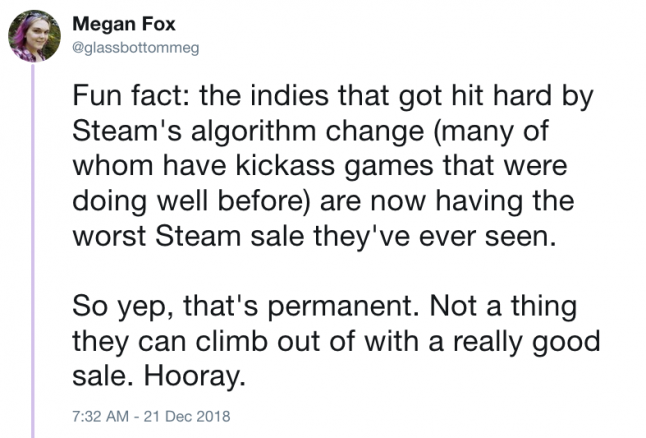 This is not the first change to the discovery systems to cause a change in traffic. Valve has been tuning these systems since they were introduced. But the October change is notable in how dramatic and widespread its impact is. This broad-reaching drop in traffic is bad for indie games and, in my opinion, bad for the industry. I hope Valve is paying attention to what has happened and will consider reverting the change.

Valve doesn't owe anyone traffic. But they are going to deliver these views to someone, and I badly want them to be careful not to bury niche and indie games. Even though popularity is certainly a valuable piece of data, popularity does not guarantee that a game will be relevant to a player or that it’s a high-quality game. And, in the Discovery Queue, where players are looking to discover games they are not aware of, popularity is a particularly ill-suited metric for deciding relevance.

Weirdness is great. Diversity is great. Niche appeal is great. But these sorts of games aren't naturally top-sellers. If high revenue is now a requirement for the discovery systems on Steam, then we just aren't going to see these sorts of games anymore. Fewer of them will get made. Developers will have less freedom to be experimental. And that will be a huge loss. 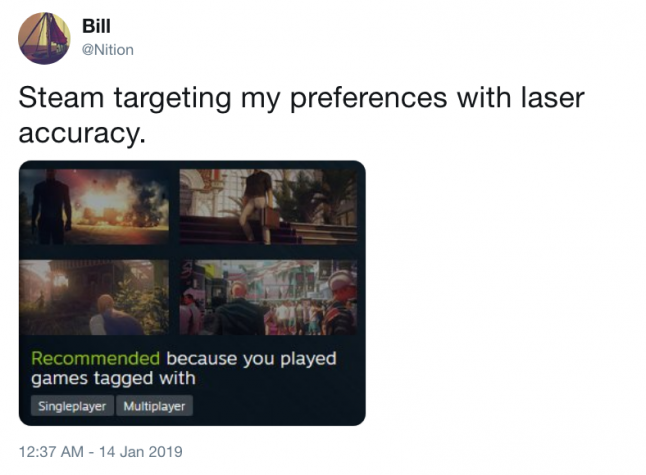 Lars Doucette's survey from early December found "Not getting screwed by 'the algorithm'" as the top issue concerning indie developers. What we have seen since October is the exact sort of problem that prompts this anxiety. Developers are at Valve's mercy and now need to adapt to this new status quo. If you have a current or upcoming game on Steam, look at your traffic and revenue numbers since October. Compare the most recent winter sale with the previous one. You might need to revise your revenue forecasts or increase your marketing budget, because you are probably getting less visibility than you used to. 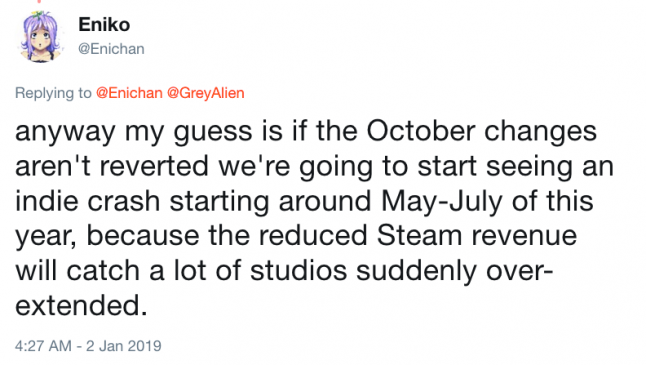 Valve has said they are working on new machine learning based recommendation systems, so we do know that more changes are coming. In the meantime, if Valve were to revert their discovery systems to the way they were in September, that alone would be a win. Beyond this, I would love to see Steam do a better job with its recommendation algorithms. I want the Discovery Queue to be good at showing high-quality games that are relevant to a user's tastes. I don't think we will ever escape using popularity as a metric for visibility, but I hope Valve will make sure that its influence isn't overwhelming other factors, particularly for features like the Discovery Queue.

Part two of this article, an analysis of what the Discovery Queue is showing me, is in the works. Follow me on Twitter (@erikejohnson) if you'd like to know when it's ready. My DMs are open if you want to discuss anything indie-game related, and I'd love to hear about how the October changes have impacted you.