The Race to the Top: Sproggiwood’s First 14 Days on Mobile

Is there hope for premium indie titles in the world of mobile? Jason Grinblat relates Freehold Games' experience launching its story-driven roguelike, Sproggiwood, on iOS and Android, and he shares the figures from the first 14 days of sales.
Jason Grinblat
Blogger
July 09, 2015

Hi, it's @ptychomancer from Freehold Games. So we released an indie game on mobile for $9.99. 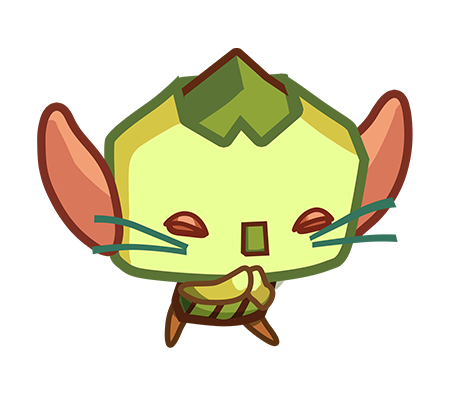 On May 28th, our story-driven roguelike, Sproggiwood, came out for iOS and Android. (It's been available on Steam and Humble Store for eight months.) In my last blog post, I talked about how we struggled to warp our design around in-app purchases until we threw up our hands and decided to let our premium flag fly. In this post, I'll show you how Sproggiwood sold over its first 14 days. I won't draw any grand conclusions about the sustainability of small studios (though if the topic interests you, I encourage you to read this); this will merely function as a data point for premium sales in the mobile ecosystem.

Deciding on a price was difficult. For the Steam / Humble release, we landed on $14.99, which we consider fair value for the game given Steam's sales cycles. For mobile, there was pressure to drop down to as low as $2 or $3—which is absurdly cheap in comparison, but possibily necessary to compete in the free-to-play dominated iOS and Android markets. A giant volume of games and very little curation means that success in the mobile space is wildly unpredictable, so there's temptation to price as low as you can and gamble that your game is a viral, outlier success.

We'd heard some other rumblings, though, that the endless sea of mobile games makes it so that demand for your game is relatively inelastic (meaning a small change in price won't have much affect on the number of units you sell) since the bulk of your buyers are likely loyal fans or genre enthusiasts who found your game in the first place. This fact, coupled with our "PC perfect" port, led us to choose a price closer to parity with the desktop version. This way, desktop buyers wouldn't feel ripped off, and enthusiastic iOS and Android buyers would pay a steep-for-mobile but fair price for a game they're likely to enjoy.

A week before our release, I learned that QCF Design was planning to launch its mobile port of Desktop Dungeons on the same day as us. Desktop Dungeons and Sproggiwood occupy a similar niche; in fact, DD was a big influence on Sproggiwood's design. I hadn't talked to designer Danny Day about their launch plans. I must admit, I was scared that they would unintentionally undercut us. As it turned out, they chose $9.99 as well—and for similar reasons.

A Tale of Two Launches

Before we get into the numbers, I'd like to establish the context for both our mobile and desktop launches. In October, we released the desktop version of Sproggiwood to relatively little fanfare. Steam reviews were positive, but we didn't get much press coverage. For the mobile launch, we decided to work with the wonderful folks at indie PR firm Novy Unlimited for help with promoting Sproggiwood. Designed with mobile in mind, we thought that Sproggi had a chance to really shine, but the volatility of the mobile market left us only cautiously hopeful.

As it turned out, our launch went way, way better than expected. First and foremost, we got a Best New Games feature on the App Store—the holy grail of a mobile launch. The release was also picked up by Touch Arcade, Pocket Gamer, and Gamezebo, and then all three sites posted glowing reviews. Then, we won Touch Arcade's game of the week. Then, once our new release feature rotated a week after launch, we got another brick feature on the App Store front page, a Best of May feature, and a feature on the Pay Once & Play page—Apple's new promotion for premium games. 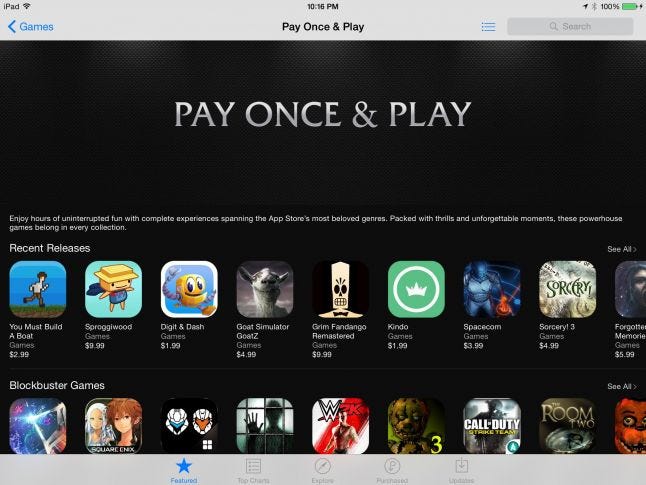 Over the first 14 days of our mobile release, we sold:

Compare this to the first 14 days of our desktop release, where we sold: 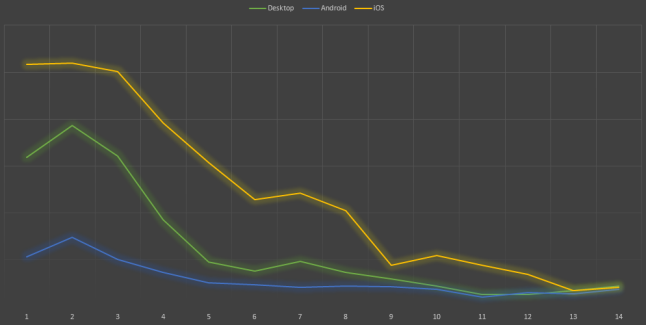 Note - These dramatic curves are typical of launches: the wild number party flattens out to a much less exciting afterparty a few weeks in.

This is the big one. Contrary to the prevailing wisdom regarding premium games, our mobile release solidly outperformed our Steam release.

Sproggiwood's universal iOS support is really paying off for us. Our iOS sales are split nearly equally between the two devices. 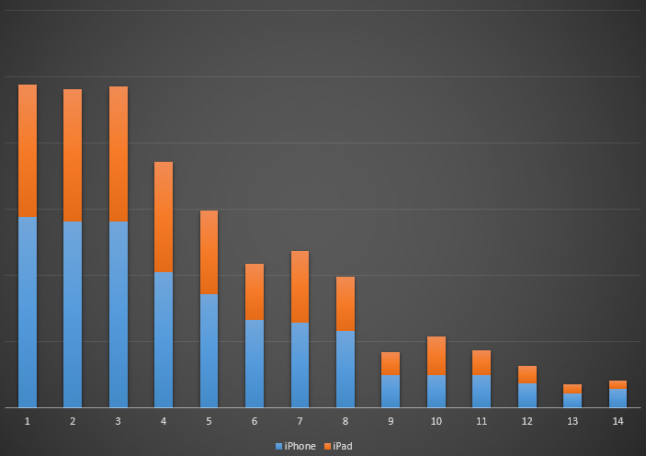 Android Is More than a Den of Pirates

While we were selling 5x as many units on iOS than we were on Android over the first few days, those numbers have converged. Fourteen days in, we sold ~40 units on iOS and ~35 on Android.

By all accounts, the launch was a big success—but not a rampant outlier. It's hard to isolate factors here, so I won't draw any hard conclusions. Given the volatility of the mobile space, though, I can say that we're happy with the results. The big question is whether we can get the same long tail out of mobile that we're getting from Steam. If so, then we could triple our Steam revenue over the course of Sproggiwood's lifespan. I'll keep you updated.

For the past few weeks, as we prep for the July 15th Steam Early Access launch of Sproggiwood's spiritual predecessor, Caves of Qud, I've kept one eye glued to our sales data. A few interesting things have happened. First, predictably, our sales flattened out after the launch buzz. As of two weeks ago, they'd baselined to around 28 units/day on iOS and 13 units/day on Android. Second, due to some shuffling of the Pay Once & Pay page and a fortuitous inclusion in Apple's 15 Most Epic RPGs feature, our App Store sales have jumped back up to 64 units/day over the last two weeks. 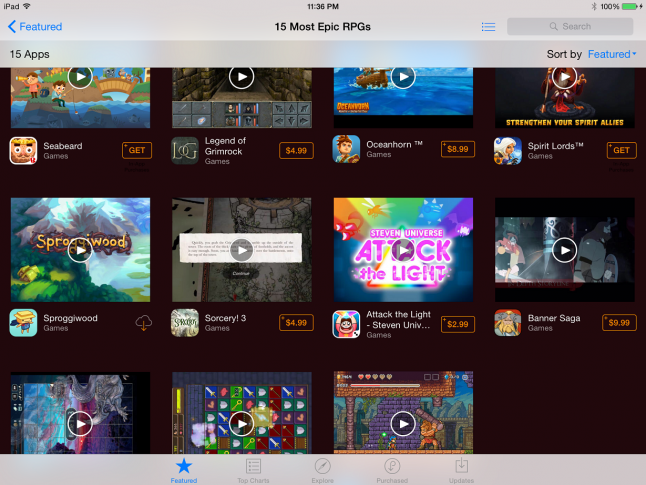 That puts our App Store average at around 45 units/day over the last 27 days. We've had no such luck getting a Google Play feature, so we hovered around 13 Android units/day over that span.

It'll be interesting to see how Caves of Qud, a more traditional roguelike with a modest but existent following, performs on Steam compared to Sproggiwood. It caters to a much more narrow set of players—the kind who like retrofuturism, brutal difficulty, books and books worth of excessive lore, and sentient plants. But it caters to them really well. 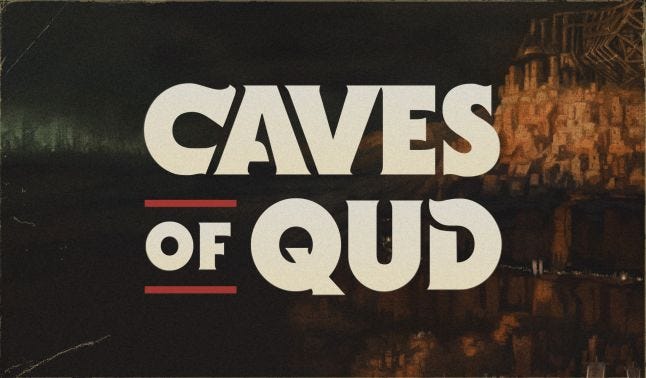