The Likelihood of Making at Least $10,000 in the First 30 days of Launch on Steam

In this article I discuss a recent post from Valve about game revenues, point out the difficult task they are undertaking and offer some practical strategies for smaller developers
Shaz Yousaf
Blogger
April 09, 2020

The world is complicated.

I like attempting to decipher the truth from the noise.

I also happen to be a game designer/developer and enjoy finding and analysing relevant stats. Valve recently posted some graphs showing that more games than ever are making at least $10,000 in the first 30 days of Launch on Steam. Great news for independent digital creatives. They had various ways of analysing the stats and you can read more in their original post. Here’s a nice graph they made, taken from the appendix of that article. 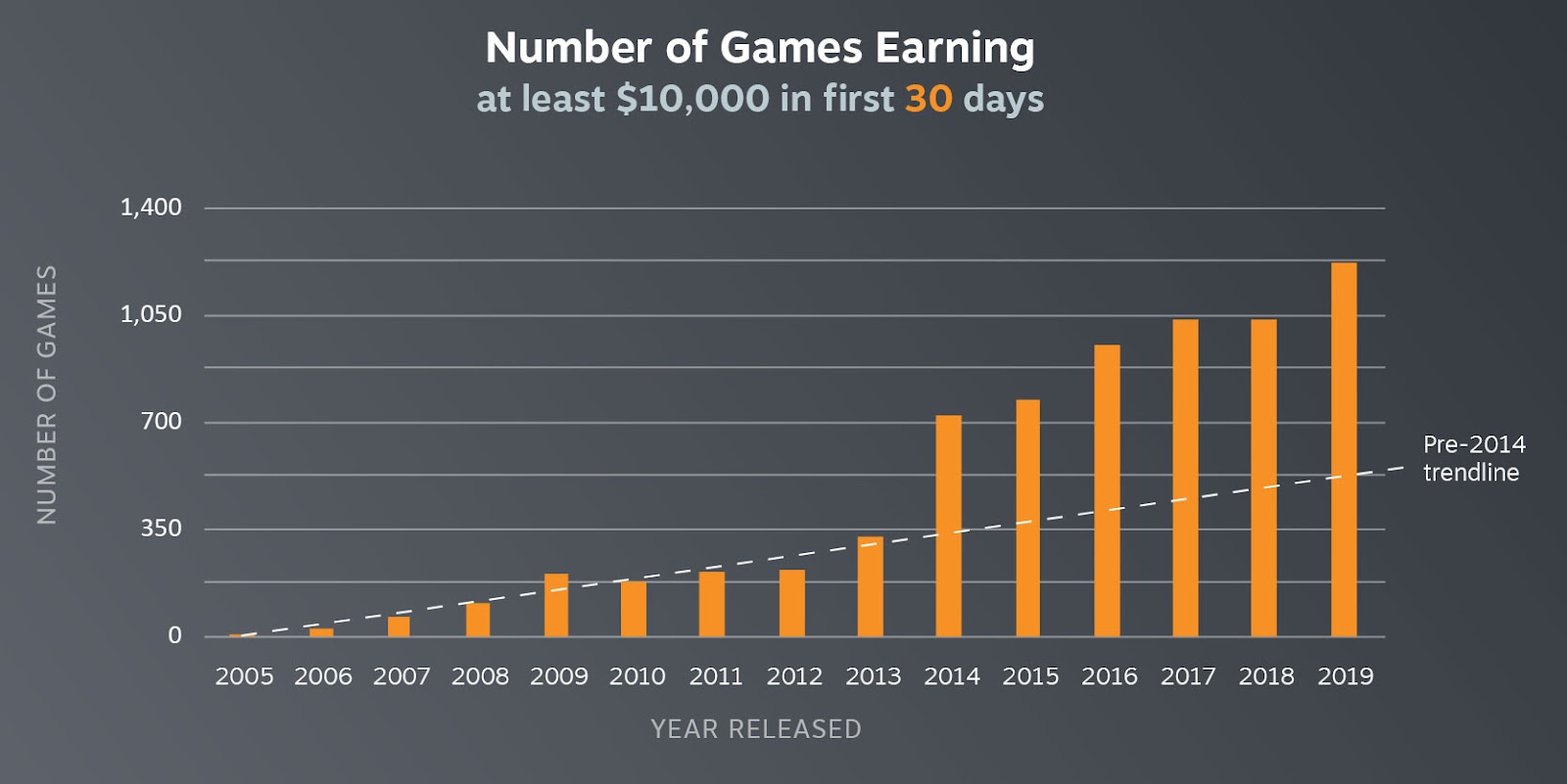 I thought it might also be useful to add some context to those figures as the number of games being released on Steam has also been increasing in recent years.

Below is a table showing the percentage of new releases that hit the above metric of making at least $10k in the first 30 days of launch. Please keep in mind this is an indication of trends rather than the precise results for the following reasons:

Here's a bar chart of the same table data so it’s easier to visualise. 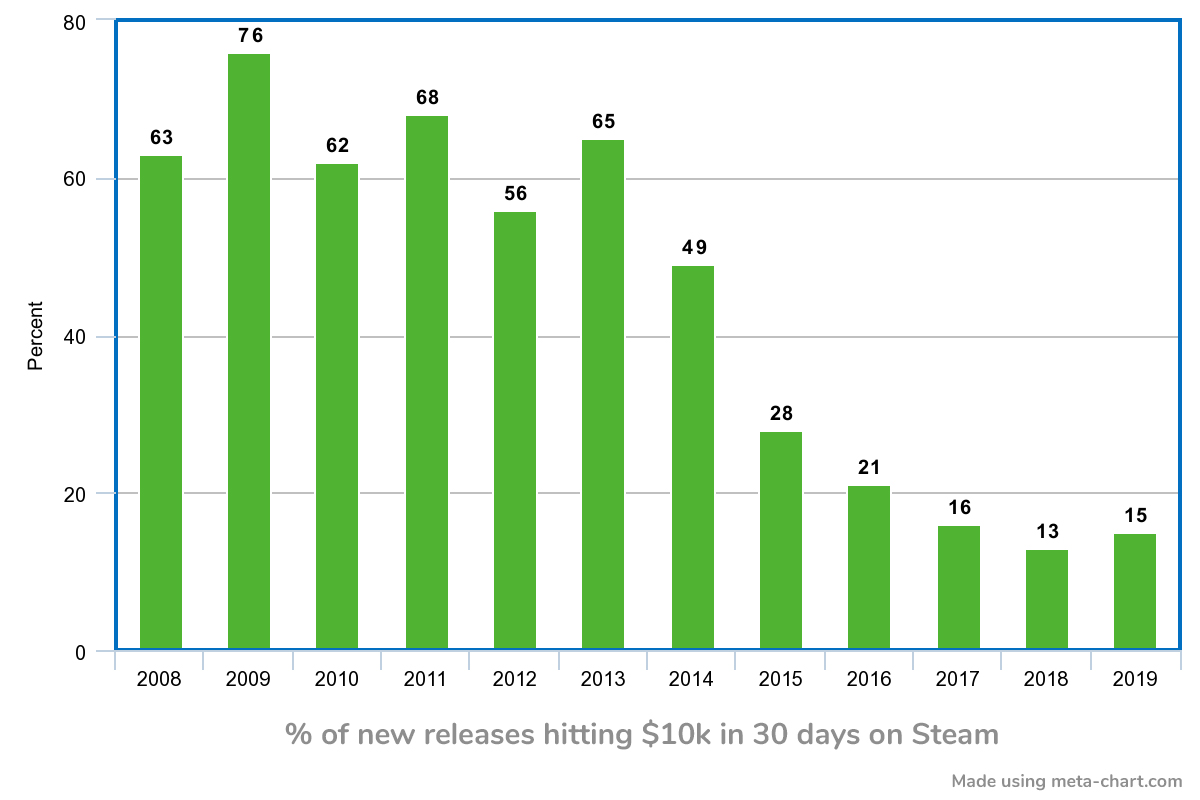 We can clearly see that, as you might expect, as more games become available on Steam, a smaller percentage of them are able to achieve revenue of at least $10,000 in the first 30 days of launch.

Should Indies Get Out The Pitch Forks and Tweet Valve With Great Vengeance and Furious Anger?

In my opinion, Valve have taken on a very difficult task, and one that I respect. As I see it they are trying to battle natural macro behavior. In a previous article I briefly touched on the Pareto principle. It’s a strange phenomena that tends to crop up in many avenues of society. Essentially, perhaps because of our innate behaviours of forming hierarchies, worshiping the same idols and copying what those around us do, most of us tend to talk about the same things, play the same games, listen to the same music and [insert activity] as those in our perceived community. This means you get a small number of “big winners” and a large number of “small winners” if winning means achieving popularity in any given domain. In other words, it's not "Steam's Fault" if the most popular games massivly oveshadow the other games.

You can read an article by Stardock, creators of Sins of a Solar Empire, to hear some more interesting thoughts on the Pareto Principle, the changing landscape of Steam and their response to it as a creative business.

So how are Valve combatting the effect? They are introducing various new discovery tools and algorithms that, in theory, will only display games that an individual user is likely to genuinely enjoy. So even if game X is the current top selling game of the week, a user who shows no interest in that “style” of game should not see it on their Steam front page. Instead they’ll see games that interest them. This is fairly new ground that Valve have yet to perfect. But they are definitely trying and I commend that. As an anecdotal aside I think Spotify do a good job of recommending tracks and artists based on user preference and Youtube do a moderately good job of recommending content based on user preference.

I should point out my bias though. Myself and two comrades released a niche game on Steam which we thought might get some downloads at release and then drop to 0 soon after launch. However, we have been pleasantly surprised to see that it has consistently been shown to Steam users every month and consistently gets bought and downloaded. Due to this modest success, we’ve been able to attract some publishers who want to push it out onto more platforms. So my personal perspective is that I’m grateful to have the opportunity to follow my creative passions (I like designing games that try and make people feel connected to each other) *and* have a platform that helps us to monetise our creations every month through their automated systems.

I think some of us have an assumption that “a level playing field” is possible. By that I mean a world without “top 10” charts and where the disparity between the rich poor does not continue to spiral. However, I now question that assumption. It might be more likely that the sum of human activity looks very much like a scaled up version of our basic tribal instincts where we want to belong to a group and feel the same as those around us. The more interconnected and fast moving our societies and social/financial networks are, the more quickly the big winners surface and become dominant in their field because they can amass more followers at a rapid rate of acceleration.

So what does this all mean on a practical level if you are  a small studio trying to sustain yourselves with the content you create? There could be various strategies. Here are a few different approaches:

Don’t try and compete in saturated markets/platforms. Find emerging markets/platforms and enjoy the relative fame there while you can before the larger organisations move in and dominate. We saw this happen with Apple’s App Store and in the PC space there have been several new platforms springing up in recent years that you could investigate. There are always new opportunities to take advantage of.

Figure out how you can beat the larger organisations at their own game. This is obviously very challenging and perhaps foolhardy. However, if you have a good understanding of what customers really need/want and you have an efficient design/production approach you might discover what you *don’t* need to build into your products. This will allow you to prioritise what your audience wants and build it with a smaller team, ignoring costly features that traditional studios still assume are necessary.

Don’t try and be the star. Instead of wanting the limelight for yourself and rolling the dice to try and make that happen, build tools that allow others to follow their dreams.

Rather than attempting to create your own network or following, make use of an existing one. Find an emerging network/service/product and build your content on top of it to give that audience more ways to enjoy the core product.

Work with larger partners. An established publisher or investor would not expect all their projects to make a profit. If they’ve calculated their risk portfolio well, the hits they have will far outweigh the cost of the losses. On the flipside, if you are relying on your single project to be a hit, you’re playing a risky game.

Ignore anything to do with shifting business landscapes. Follow your creative instincts, place your bet and go all-in. You might get lucky, someone has to! (Don’t actually do this unless you are young and have a wealthy family who can/will support you if you go broke!)

Ok that’s it from me for now, I don’t often use Twitter but I do have an account so you can message me @HoneyTribeStu (although it might take me a while to respond)