The importance of community gaming and the the Indie gaming sphere

A mess of ideas outlining the benefits of game communities, and how they can leverage better creating games and giving motivation towards developers.
Justin Pedersen
Blogger
March 05, 2014

First things first, to try and create a level of transparency, I am co-founder of the startup SandBoxd Inc;  we recently rolled out a new site design for our device agnostic HTML5 games portal. I wanted to start a dialogue about community gaming and the great benefits of enjoyment and retention if you have a strong sense of community backing  your game. I will be linking it back to what SandBoxd does, as both an explanation of what we are doing as well as [trying to] demonstrate how we are going about practicing our proverbial preaching.

“You know what would be really cool? If….”

That was the question that lead me to 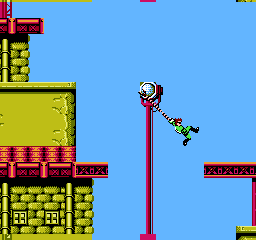 create video games; the escapism and imaginative qualities that video games provided me. It started with the NES game Bionic Commando. You were a commando, who was bionic. You used your bionic grappling arm to get through the nazi-infested areas as you race towards killing resurrected machine-Hitler and save the day etc etc, pretty standard stuff in terms of plot. BUT, the thing I gravitated towards was the bionic arm--the inclusion of something like that changed the entire mechanic of side scrolling for me, and I thought it was the coolest thing (despite actually being a work-around for the inability to jump). And in video game form it allowed to create a whole paradigm to play around in.

We started our game dev careers in high school, using Adobe  Flash for everything, with art falling under my responsibility and programming under SandBoxd Co-Founder Sam MacPherson. After a few titles to find our bearings, I thought “the coolest thing” was in F.E.A.R., how everything you shot would react different (shooting metal would spark, wood would chip off, cement would chip etc). Quite possibly the MOST RANDOM THING to appreciate about that game, considering the benchmark setting quality of the whole thing, but it is what it was and I wanted to try and make that. I thought it would be “really cool if… we made a game with that effect, it would be the coolest flash game evar.”

It led to our first flagship title PAWN being created. A real time multiplayer side scrolling shooter that saw considerable success relative to two high-schoolers. From there we created a top down shooter PAWN:Tactics. With the release of these two, we also had forums set up, with leaderboards, as well as releasing the map editors and associated assets for the users to create their own (PAWN in fact had map builders and custom map hosting built into the game). 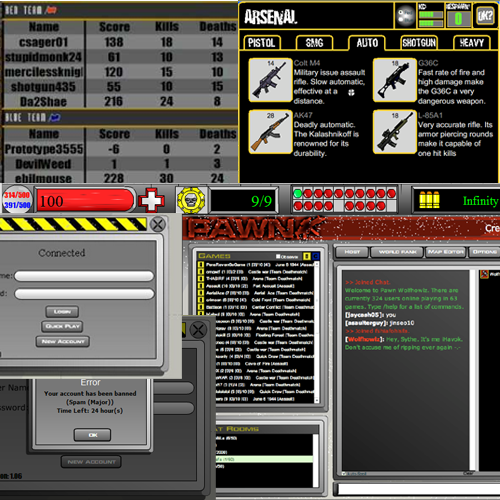 The games in retrospect had a somewhat of a hodgepodge design with GUI and UI designs added at an ad hoc basis for when we needed them--taking colours and graphic design from what I thought was cool at that particular time in development (see image to the left; that was all in the SAME game, PAWN), and gameplay wasn't as polished and tight as it could have been. However, the core following we got was large enough to fund our way through university for the first year or so, and we began to realize the single most important quality of our games: Community.

What Was Intrinsically Cool to Us

With our forums linked to the games it provided a space for users to congregate and discuss tangential and often wayward topics. The games we made were sometimes themselves tangential to the community--with things like art sections and pure conversation threads as active as tournament hosting threads.  With this in mind we began our third title Zed, a MMO-zombie RPG with this community aspect in mind. Unfortunately scope creep took over and the scale of MMO we wanted was much too large for a 2-person team, and we couldn't get the community functionality we wanted, such as auction houses and team based exploration that would require team play to achieve. Coming short of our objectives, we were disappointed that we couldn’t get the grand designs we were looking for. Trying to build everything in game was just too much, but along the way we realized what was important to our games to make them successes in our terms:

Social: We loved the fact that we fostered a community, the regulars. They were the most beneficial users as they were the most vocal, and the most active part, bringing involvement from other users. Having an online social presence allowed our games to transcend beyond "play and stray.” They made a reason to keep playing for years, and continuing even still. Integrated clan formation for PAWN:Tactics was a huge success, as the team-based gameplay paired perfectly with the ability to have a clan tag to identify yourself. Our forums allowed out of game formation of tournaments, with people volunteering for moderation, refereeing, and tournament awards (mostly donated art functioning as forum signatures).

Competitive and Comparative: The more you can do together in game creates more engagement as well as immersion. The alternate life aspect of video games is fantastic, the more involved all the in-game functionality is, the better--but sometimes it isn't possible, so we wanted arms-reach functions such as chat and group formation for the cases where you want out-of-game interaction to organize in-game events. Our games never had a plot, an ending, or even an in-depth backstory; and like most arena games, you just hopped in and played--the point of playing was simply because other people were there. You wanted to be better than them.

Why We Want to Expand On That

The idea of community gaming is obviously not new,  with major web titles running from every calibre of game dev from AAA to indie, but with the popularity of mobile devices and pervasive connectedness, paired with the neat things we've been seeing with HTML5, we wanted to make a comprehensive platform to play, share and compare games.

Developing SandBoxd, we are trying to help foster the burgeoning  HTML5 sphere, and internet gaming across all devices. Internet connectivity was not only a benefit, but the backbone of our prior titles--there was no offline single-player. With more and more devices being connected to the internet, why not utilize the ability for anyone to play, at any time?

The current pitfalls are obviously getting titles that match our mantra. We would love to have MMOs (Ironbane being a really awesome open source MMO project) or real-time competitive games available to play anywhere, but HTML5 is still gaining traction. Which causes a very interesting Catch-22: In order supply of HTML5 games, there needs to be demand. And how do we start that economy? Why would we need to? There are other ways to create games, and the success stories make it very apparent, such as the app store or console arcade success stories. The draw towards those could be like musicians believing they could become the next star--not impossible, but there is a certain level of luck and perseverance involved (and of course the massive amount of back-breaking, Norwegian-fisherman-diet fueled developing). But looking at the community of developers, international scope, and app stores, there is a very large number of us that are still able to make an apparent living despite not being touched by the Gaming-God-of-Fortune. Another outlet is the game-a-weeks, or weekend dev challenges. Ludum Dare is an obvious and successful example of this, and putting the deadline framework is a critical component to the creative process (I would argue unbridled creativity is actually hard to use to get anything done, but that is for another day). To incubate the possibilities coming out of these “one off” type games is to have a place to upload them too, to have a harbourfront to get games from all over the web, and the developers and players all congregating together, discussing the works, with the potential to find interesting gems that the developers learn they could expand into a very popular title, one step crowdsourcing.

Showing the fringe stuff in developer oriented communities is no doubt a great way to learn the successes, pitfalls and problem areas of your game, but imagine leveraging a viable gaming community that results in developer meeting user. We could all attest to the notion that there is no harsher critic than our own fans, and meeting them face to face could create an interesting social economy that could change the very nature of game design, perhaps large scale democratic design or the virality of an otherwise overnight experiment game to test that super-cool idea you thought would be neat to see.

Coming to what I suppose would be the thesis of this, is that I believe that we are coming on (or already in) the golden age of indie game development; the advancement of the technologies and availability of information gives the power to anybody to make a cool idea be realizable. And we are looking to find a way to incubate a community full of people having the same thoughts of what would be cool, and the ability to make it, share it, and get feedback. For other people to help the development process and take the experience to a completely different level by creating a following behind it, so that more people could see that it indeed was really cool if....