The first year as an Indie - Missing Fish Games

This post provides a brief history of the indie group Missing Fish Games. It's purpose is to highlight the journey of four recent graduates who banded together to continue working while breaking into the industry.
Arturo Salazar Lois
Blogger
May 08, 2018

One Year of Missing Fish Games

April 28th marked the one year anniversary of MFG. This post is made to celebrate that fact and to reflect on the process so far. Below is a timeline showing our game making journey and what we learned along the way.

Learning and experimenting was and is the goal of Missing Fish Games. Thankfully we have been successful in that regard and we hope this post can teach something to those reading as well.

We are Missing Fish Games and this is our story

The group began with a pitch. We all worked together on other projects so it wasn’t odd when Edson asked us, Arturo, Eric, and Lucas listen to one of his ideas. He presented his vision of a team focused on making small games on Friday evenings. He suggested to use the free time to boost our portfolios and enhance our skills. Safe to say we all love the idea and jumped right in.

We took care of housekeeping and settled on the name “Missing Fish” after voting on a list of options. We wish there was a funny story leading to the name but no, no fish were involved as of the time of this posting.

Once we had the group worked out the next step was development. We decided to each create a game pitch and vote on the best one to move forward. The method is still used today. 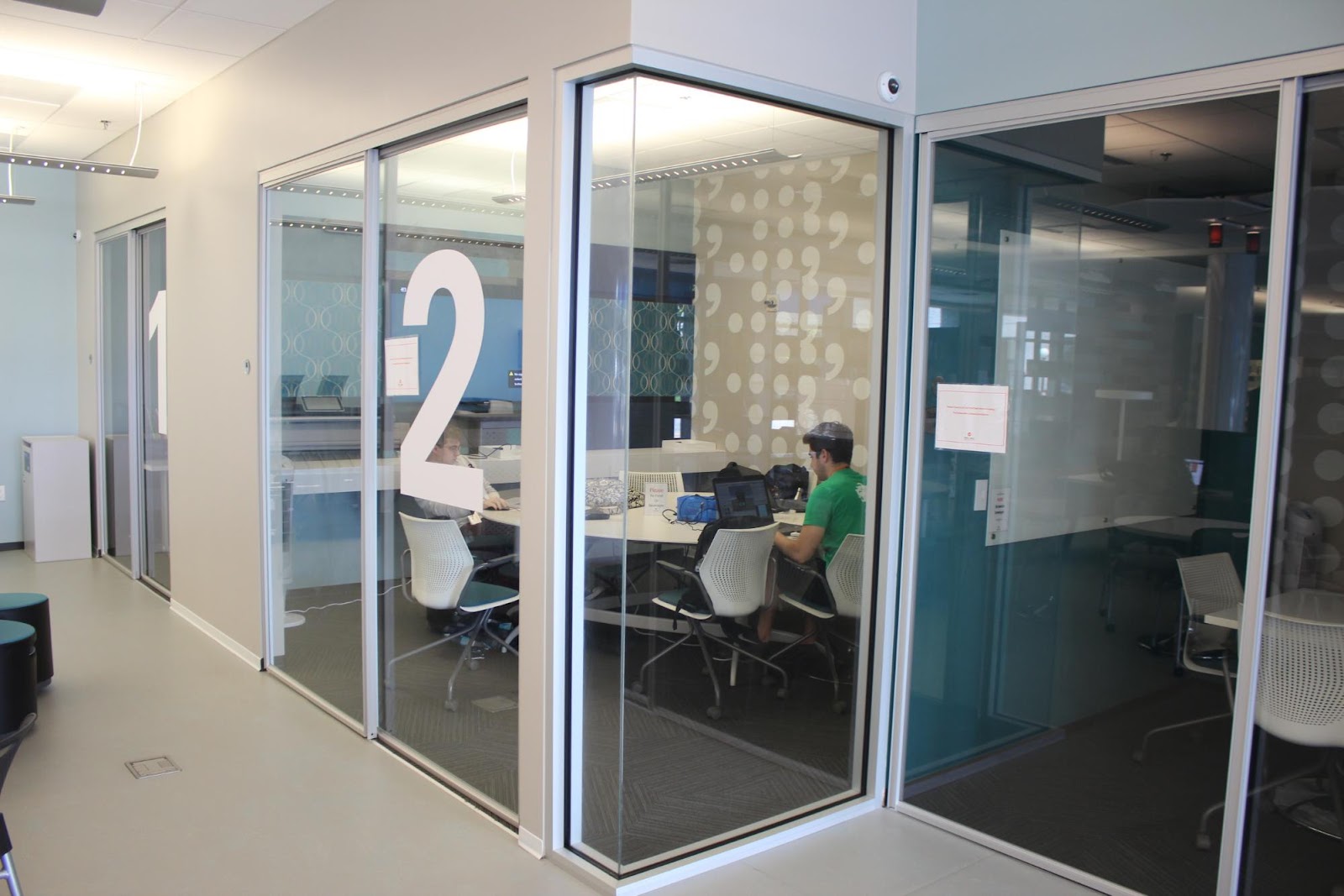 Room 2 at Full Sail University is where it all began

Better Call Bacon was ultimately chosen due to its interesting style and feasibility of implementation. The gameplay was primarily inspired by pacman to help start with a workable direction while allowing room for creativity. We kept the single screen level with four enemies tracking the player but the twist came with the goal. Instead of needing to eat the pellets, players needed to pickup a package at a set location and deliver it to a random house before time expired. 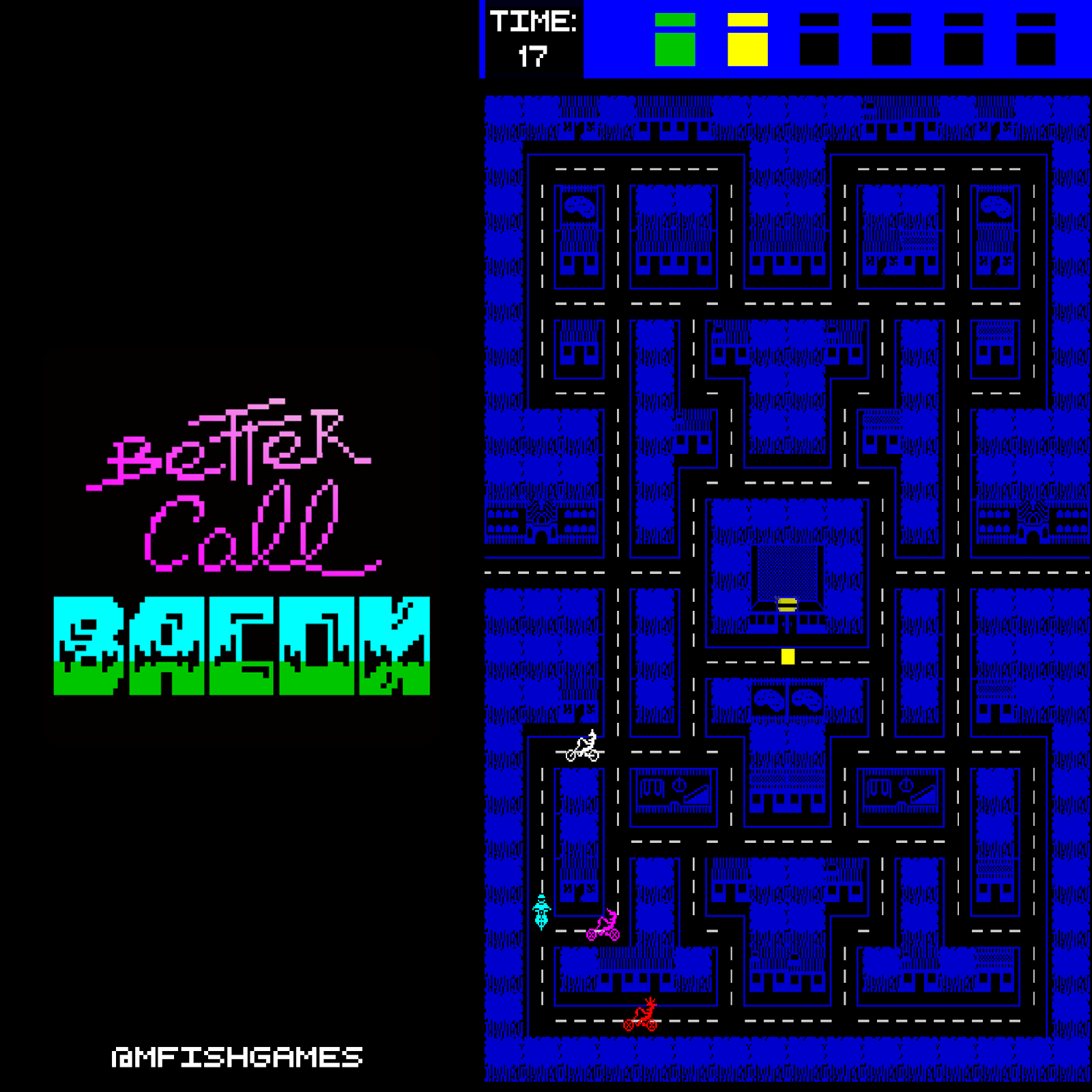 The cyan motorcyclist is in dire straights

BCB had a good mix of nostalgic difficulty coupled with 80’s style that melded beautifully. We felt proud of our product and showcased it at Full Sail events to gather feedback. Turns out the game was as niched as expected and catered to a more a hardcore audience. This proved to be an issue since we were designing hardcore gameplay on a platform, mobile, that is known for more casual play. Fortunately the game still saw a decent amount of downloads in China enough.

We celebrated our first game release together, reflected on what we learned, and set off to the next project.

For those who want to know more about Better Call Bacon, feel free to check out the app’s page on android or iOS 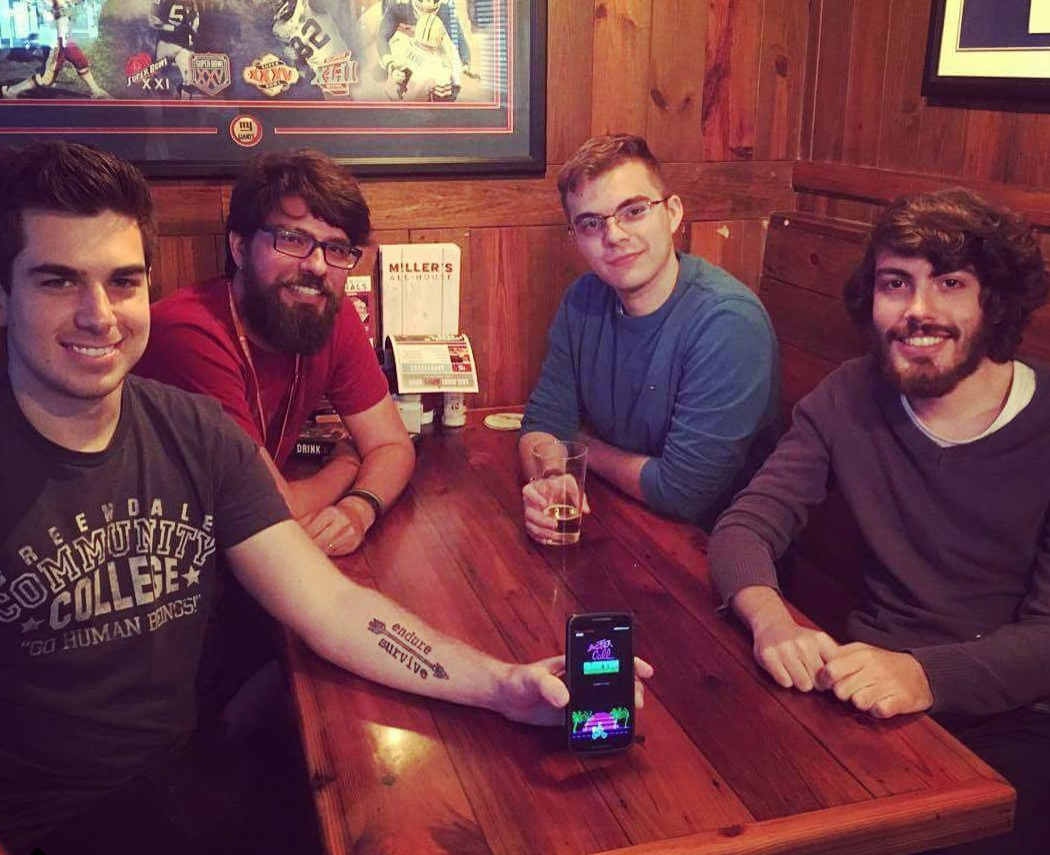 We had proved that MFG wasn’t a pipe dream and that games could be made. Now we needed to find the next project as OIX loomed around the corner. We made a new round of pitches before settling on Chow Down, later renamed to TSA.

The goal of this game was to provide a more casual and accessible experience to players. We needed to create a game that anyone could understand. The game also needed to allow small game sessions that didn’t require commitment. Lastly, it needed to satisfy skilled players while being easy enough for novices

Our solution was gameplay that focused on selecting the correct option, right or left, in a very limited time frame. The theme of inspecting incoming luggage in a space port supported the gameplay and led to some interesting visuals. 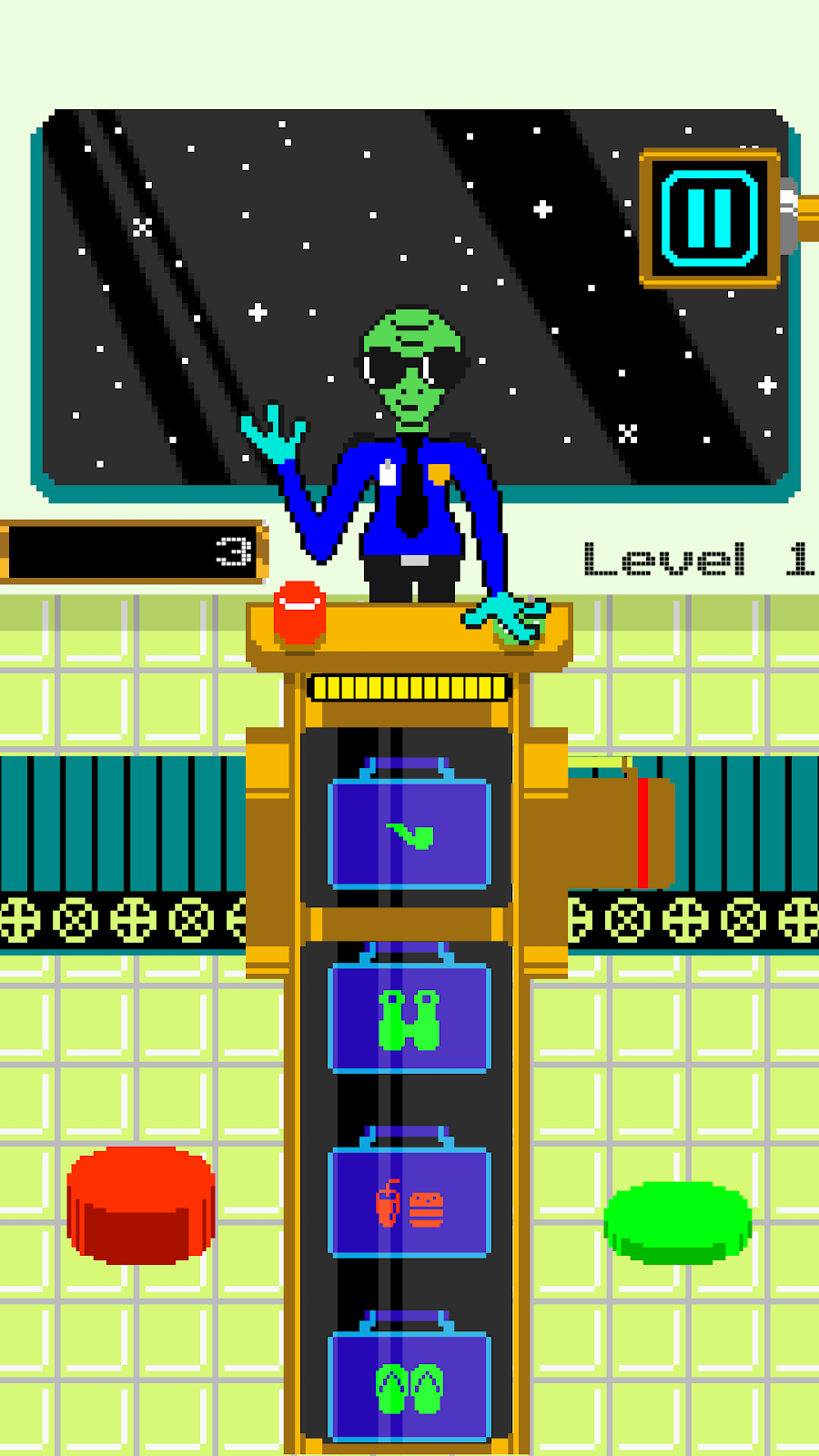 Eventually Orlando IX arrived and we set up a booth to show off our games and gauge the reaction of TSA. We hosted a small tournament that challenged players to score the highest to maximize the amount of testers for TSA. Feedback, both good and bad, was given as we made notes during their play sessions.

Players had an easier time understanding the game as expected but would quickly fatigue due to the intense nature of the game. People would feel overwhelmed by the speed of incoming luggage and needed to keep track of several items at once. Reflexes were key meaning that strategy didn’t factor in as much. Fortunately the character rooster helped sway people over and generated retention as players would complete challenges to unlock aliens.

We celebrated another completed game coupled with presenting at an event and set off to start our next project. If you’re interested in TSA, check it out on android or iOS 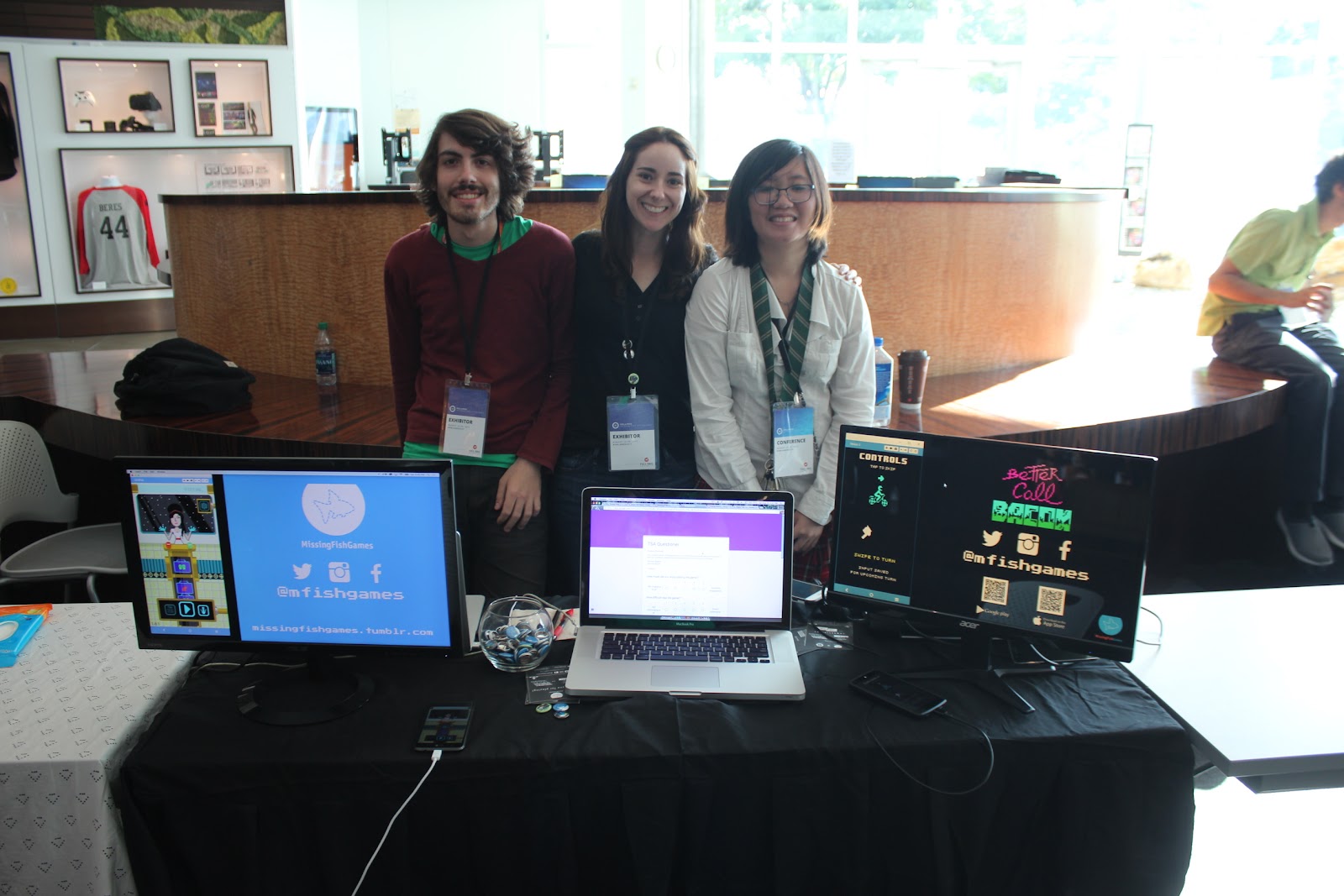 Next game on the plate, Catch a Fairy. This was our third project that would ultimately culminate into a publishing offer and an award. The game felt right from the beginning and sailed smoothly to the app stores. We knew this game had potential after seeing folks play it at Indienomicon.

Its origins began with a unity project meant for class that led to a prototype on Click team Fusion before debuting as a Missing Fish Game. The game did not need a pitch, a few minutes playing the prototype felt great and showed plenty of potential. We decided to invest in the game as our third project.

The game was simple enough, catch fairies as a frog while bouncing off a lily pad. Player’s could tap anywhere on the screen to shoot their tongue and the clear visuals made it easy to understand the objective. The challenge was creating a pace that complemented the gameplay with a difficulty curve that supported flow state. 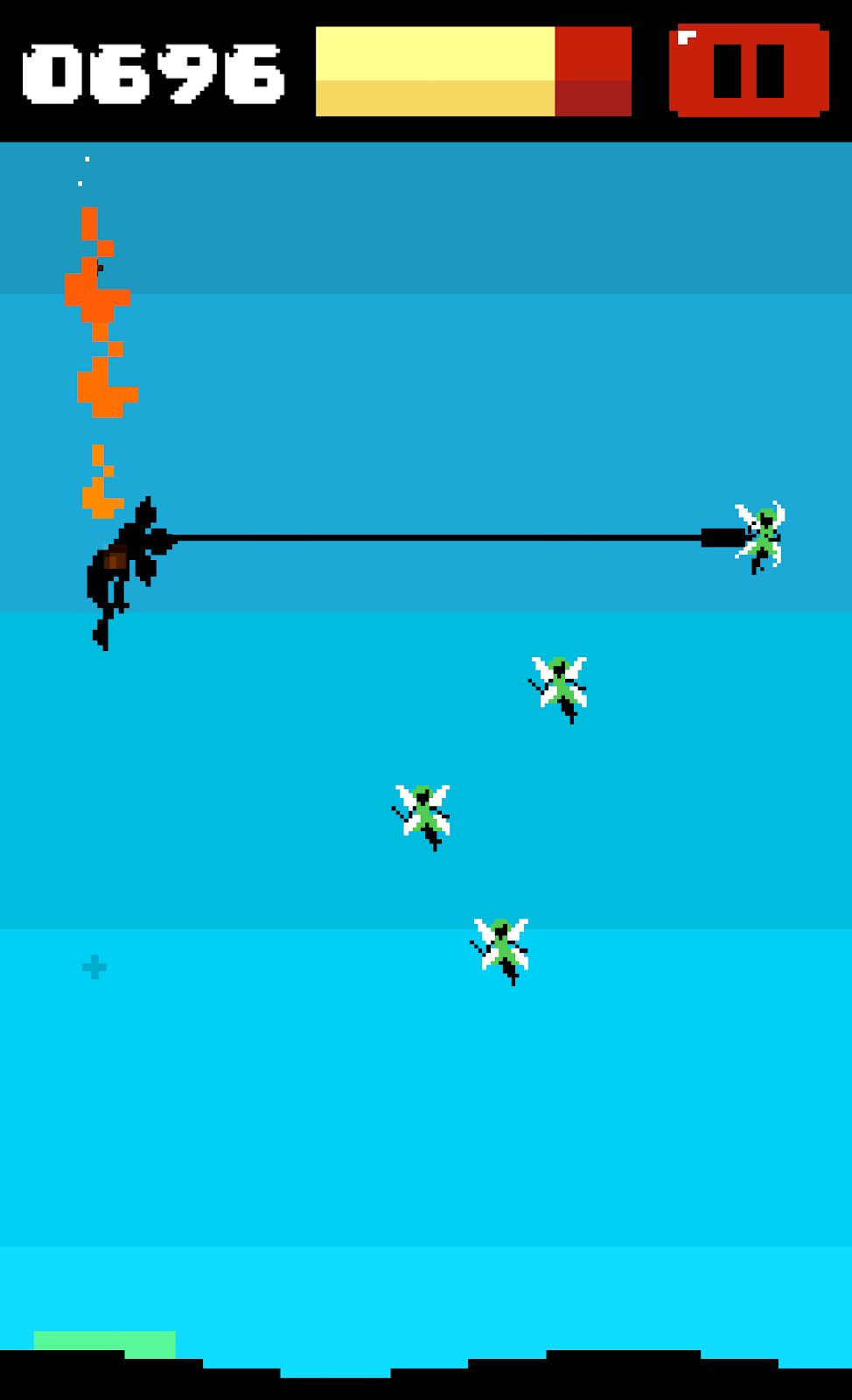 One fairy is never enough

We knew that a timer would be necessary as a lose condition and so we adopted what we learned from TSA. This time skill was a much larger factor in terms of success. The next step was creating a pixel style that was even greater than the previous two to really cement the ATARI style that suited the gameplay.

Plenty of time was spent iterating and experimenting with how players would progress over time. We approached a publisher during this time which provided us the opportunity to release a prototype first to test with game analytics. The results were promising but the game wasn’t quite there yet.

Our big breakthrough came when an idea was pitched to have difficulty increase with more fairies on the screen complimented with unlockable tongues. These new tongues incentivized multiple play sessions as they allowed for multiple fairies to be caught and thus enabled players to score higher.

The data showed the game’s potential but we finally saw the public’s reaction at Indienomicon. While it wasn’t our first time at the event, we saw more interest and returning players than our previous two games. The experience felt rewarding and we knew that our previous endeavors helped us reach this new level.

While the publishing offer unfortunately fell through for Catch a Fairy, the game helped us establish a connection with the publisher that allowed for future opportunities. Like the others, you can try CAF on android and iOS 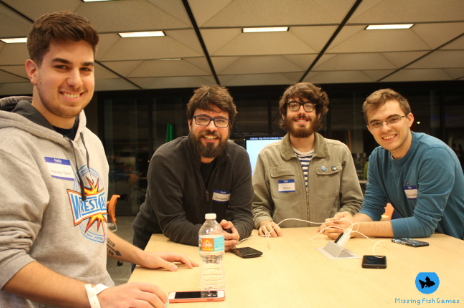 We rolled up our sleeves and got to work. The process would be similar to before, but this time it would need to fit the publisher’s constraints. This new direction allowed us to gain some experience working with limitations and deadlines. It also meant working on a lot more games in a smaller time frame.

Each prototype came with its own challenges and successes that focused on different aspects in casual games. We experimented with various art styles and game mechanics. Our focus went more wide than deep as we jumped on new projects instead of investing. 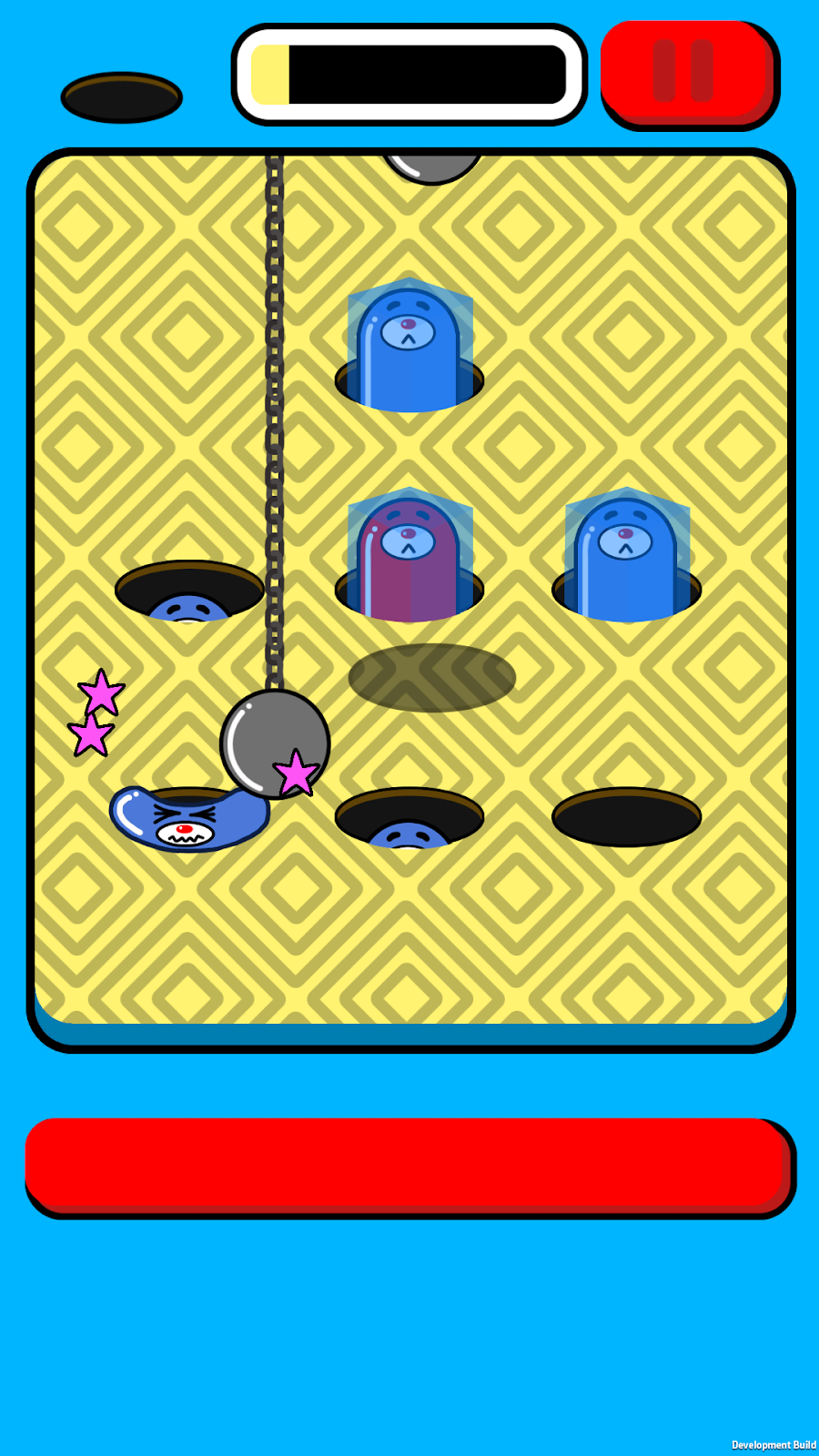 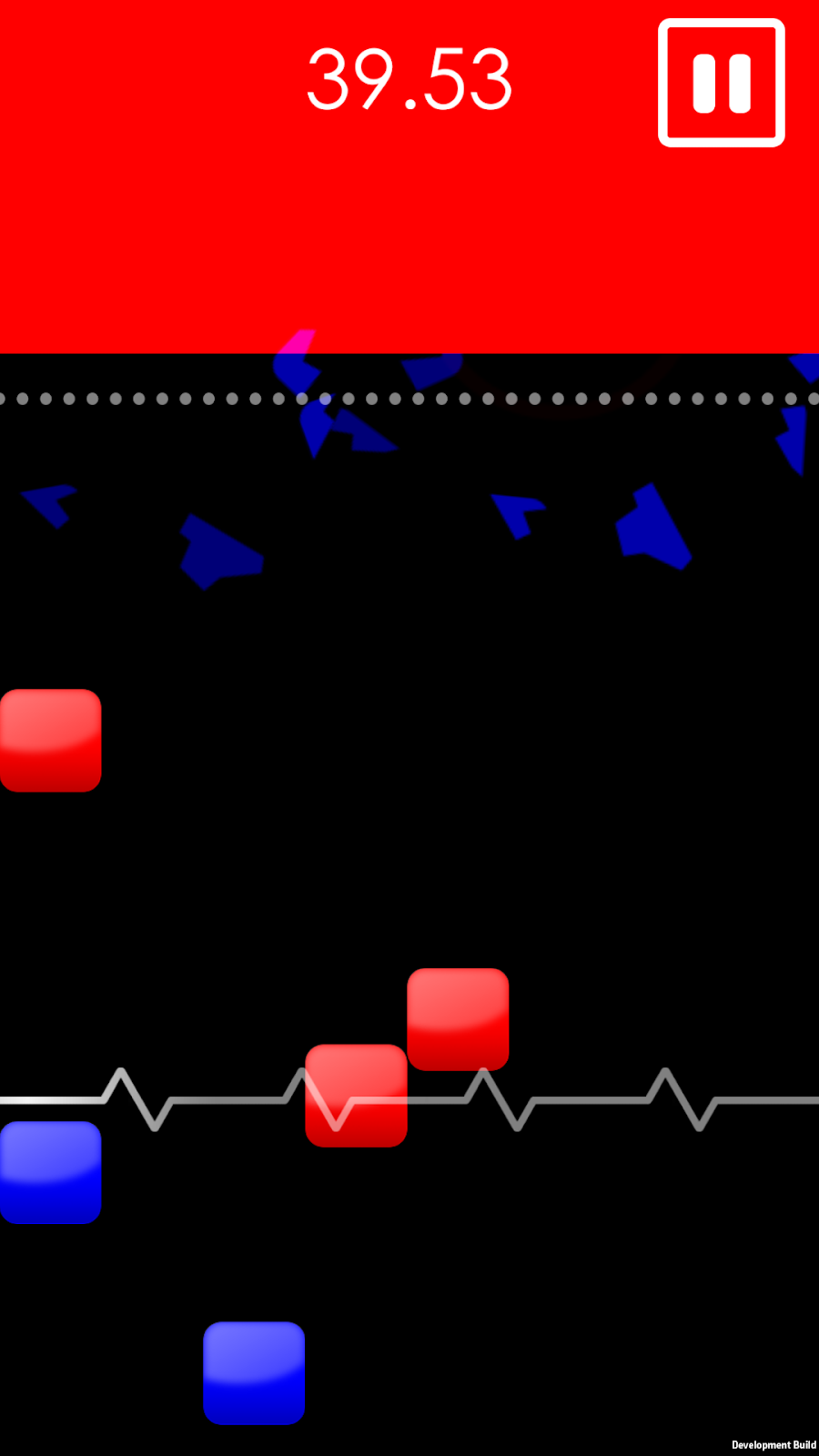 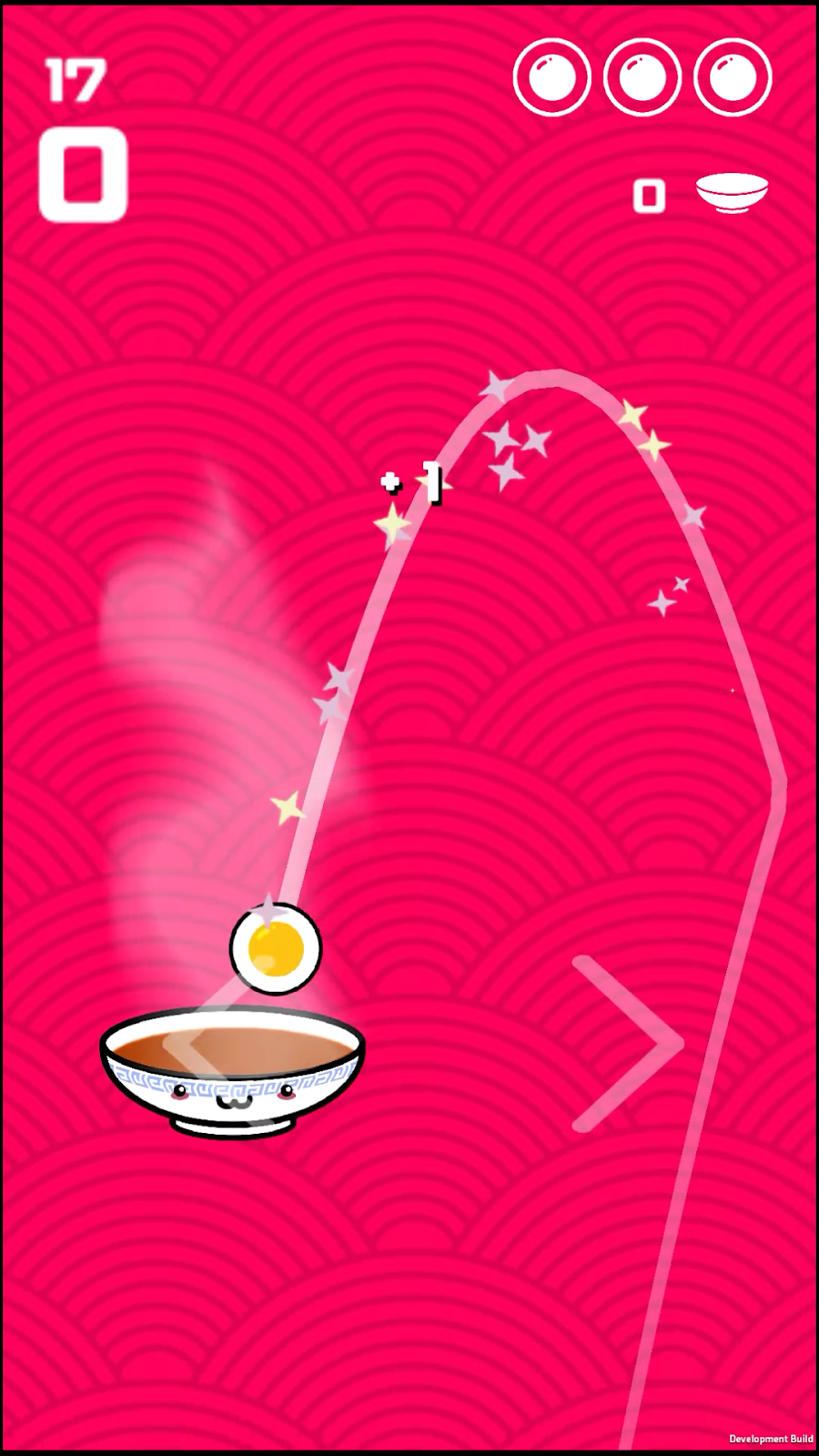 Unfortunately none of the prototypes ended up meeting the threshold needed to receive a publishing offer. Due to the nature of remote testing, it was hard to pinpoint the exact reason as to why. We could only speculate and adjust for our next attempt.

One truth is that Missing Fish Games sacrificed some of its style to cater to the widest audience as possible in hopes of creating a hit. Ultimately, creating a viral game is a numbers game and our ticket never came up. We couldn’t give the love to a single game because it made more sense to try a new idea than dedicating time to a game that didn’t score high enough.

That being said, each prototype was given enough polish and effort to be worthy of Missing Fish Games. No attempt felt like a waste and our portfolios came out much better from the experience.

The casual mobile market is highly competitive that features simple games with engaging mechanics. Because of the limited scope of the games, the primary mechanic will dictate if the game is engaging or not. Game sessions can last around 8 - 30 seconds meaning that the player needs to get hooked right away. Additionally, players are seeking brief engagements with little commitment meaning that any game can easily lose its player base if there isn’t enough retention. It seems that human psychology is a key factor where positive feedback, tangible goals, and a stream of rewards are needed to keep players happy.

2018  marked the 5th annual Indieversary where local developers gathered to network and discuss events. What made the evening more special was that it was just a few weeks off our own anniversary. Excitement was high because most of the team managed to meet in person again. Not to mention we came hoping to win an award.

MFG was nominated in three categories with winners being chosen through a public vote. We reached out online and through the people we knew to better our chances for a win. Receiving an award would validate our efforts and put some serious wind in our sails.

The announcements were tense but it dissolved to cheers when Catch a Fairy won “Best Use of Art Style”. Turned out that the game won by a margin of two votes. Shout out to our moms and dads out there.

Awards weren’t the only reason to celebrate. We had spent a year working on Missing Fish and it felt great being able to appreciate the effort the team put in. Having those win moments serve as reinforcing highlights that fuel the long periods of quiet work. 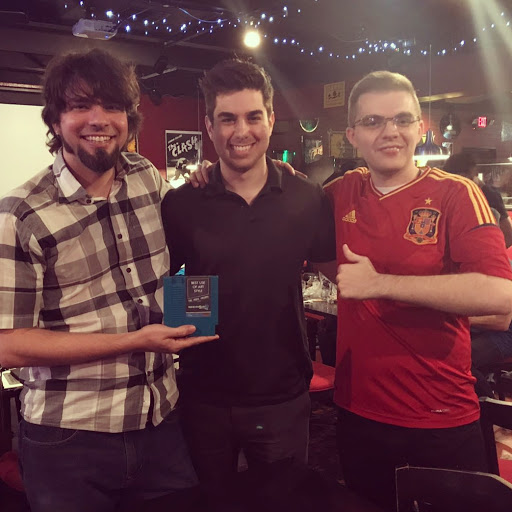 The team minus Lucas :I

It is now the beginning of May and plenty has changed over the year. We work at home over discord and our capacity is much more different than before. We’re considering different project scopes and platforms other than mobile.There is a lot more reliance on software like discord, slack, and hangouts to make sure we’re on the same wavelength. As of now, we’re publishing our previous games computer platforms such as itchio to test the waters.

While there isn’t a multi-year plan laid out the goal remains the same. We aim to expand our portfolio, learn new skills, and hopefully release a hit along the way. Here’s hoping for another great year filled with more published games and experiences. The team at “The office”