"We are living a new sort of Golden Age of game development. Yet we need to stay attentive and question what we think video game is and even simply what a “game” is", says One Life Remains indie developer collective. They see play as a performance.
Sonja Angesleva
Blogger
February 26, 2014

An interview with One Life Remains collective (Jan 2014)

The label "indie game developer" contains a license to experiment – at the same time many indie developers try to balance between weirdness and commercial success. If you make something too weird or impossible it typically won’t sell. One Life Remains is taking distance from the struggle by doing performance games that are played in festivals or big stages instead of mobile or PC. They want to ask questions and generate unique experiences.

One Life Remains is a French independent collective of five developers. They have dedicated to experimental game design. Each creation they make aim to question or jeopardize the standard and the usual representation of what a video game is supposed to be.

I got a chance to chat with the One Life Remains collective. This article is based on their thinking and gives a retrospective look of their works.

Why One Life Remains make games?


Without this approach (questioning what is a game) the independent scene runs into a risk of being defined and will not be able to renew its creation.

There is also another reason why the collective is making games: they think video game is not just a new media where everything has to be explored and invented, but rather they believe it to be a medium which reveals a lot of things about the nature of digital technology and the revolution it brings in our society.

Who defines "a game"?

When it comes to video games, people immediately have a series of images in their minds to illustrate what a video game is. Nowadays it is typically a set of abnormally restricted and narrowly considered things. What keeps One Life Remains collective interested and motivated in developing games is not what a video game is, but its potential, what it can be.

There are so many things gamers believe to be self-evident and obvious about video games; such as the form it is supposed to have, the kind of experience it would deliver, the purpose it should have (e.g. “a game is only for entertainment”) or even the way it can operate (e.g. “it has to use a screen”).  All those beliefs or self-evidence truths are not so obvious after all.

One Life Remains wants to challenge the conventions by for example questioning the controller’s status in video games. As we all know: the controller is important in video games. By it the player receives (some) power to control the character and events on the screen. One of their latest works; Gigantomachie is questioning whether we need controllers as such. Gigantomachie is a fighting game which requires giant pads (3 meters long each). To play it, players have to run from big buttons to another or share the giant pad with others and work as a team when managing one single avatar. 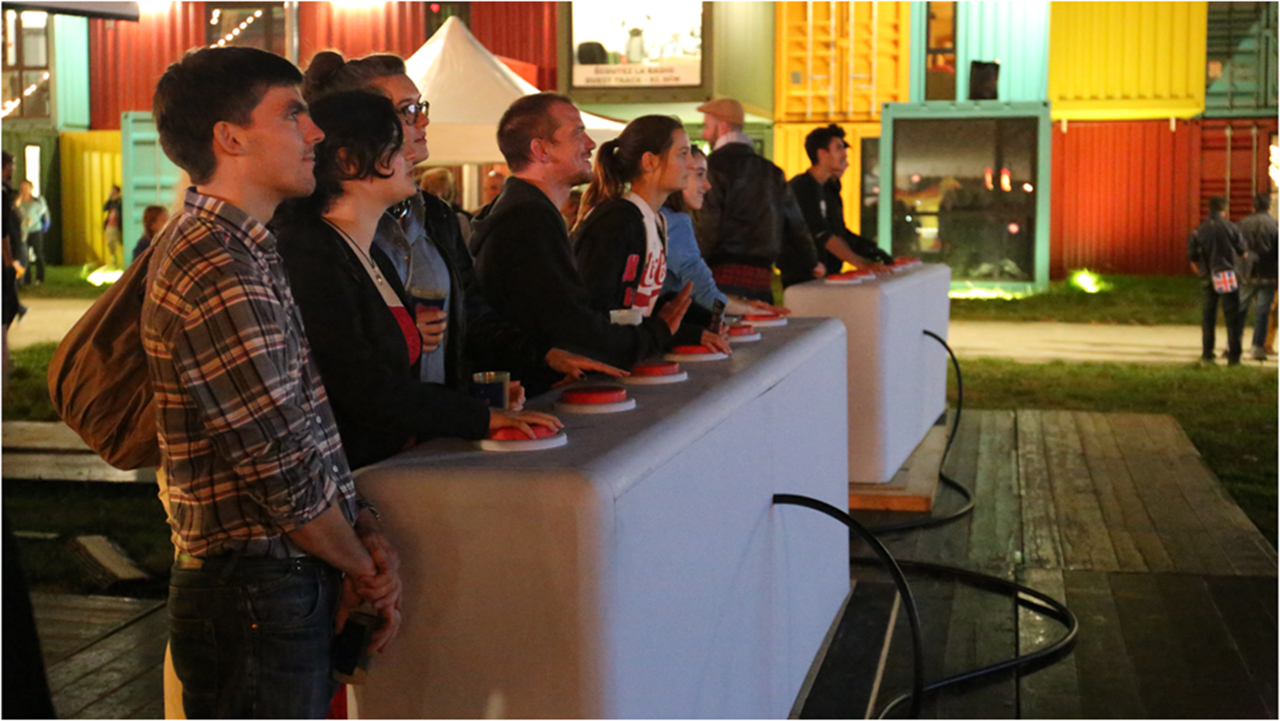 In between physical and digital

One Life Remains is interested in new technologies and new ways of creating games. They became interested in the way Sifteo cubes could be handled, turned and stacked together. They find something magical in the cubes which are half-way in-between classical videogame devices and physical tabletop games. Playing in front of an audience


When you start seeing game as a performance, a lot of new possibilities appear.

In video game field specifically, the idea of “play” as a performance enables to reverse the conventional relationship between a spectator and a player. Frequently video game is compared to cinema. The video game player is a sort of “super-spectator” who can “enter into the screen”. But if you keep in mind that the game is firstly a performance, then suddenly the relationship is inverted and you realize that play is also a way to generate a show for non-players: the spectators. That means the spectators cease to be just “non-players” and become an audience for the players' actions.

From there you can begin, for instance, to think about how to design interesting games not only for actual players, but also for spectators who will attend the performance and may find other values in it. 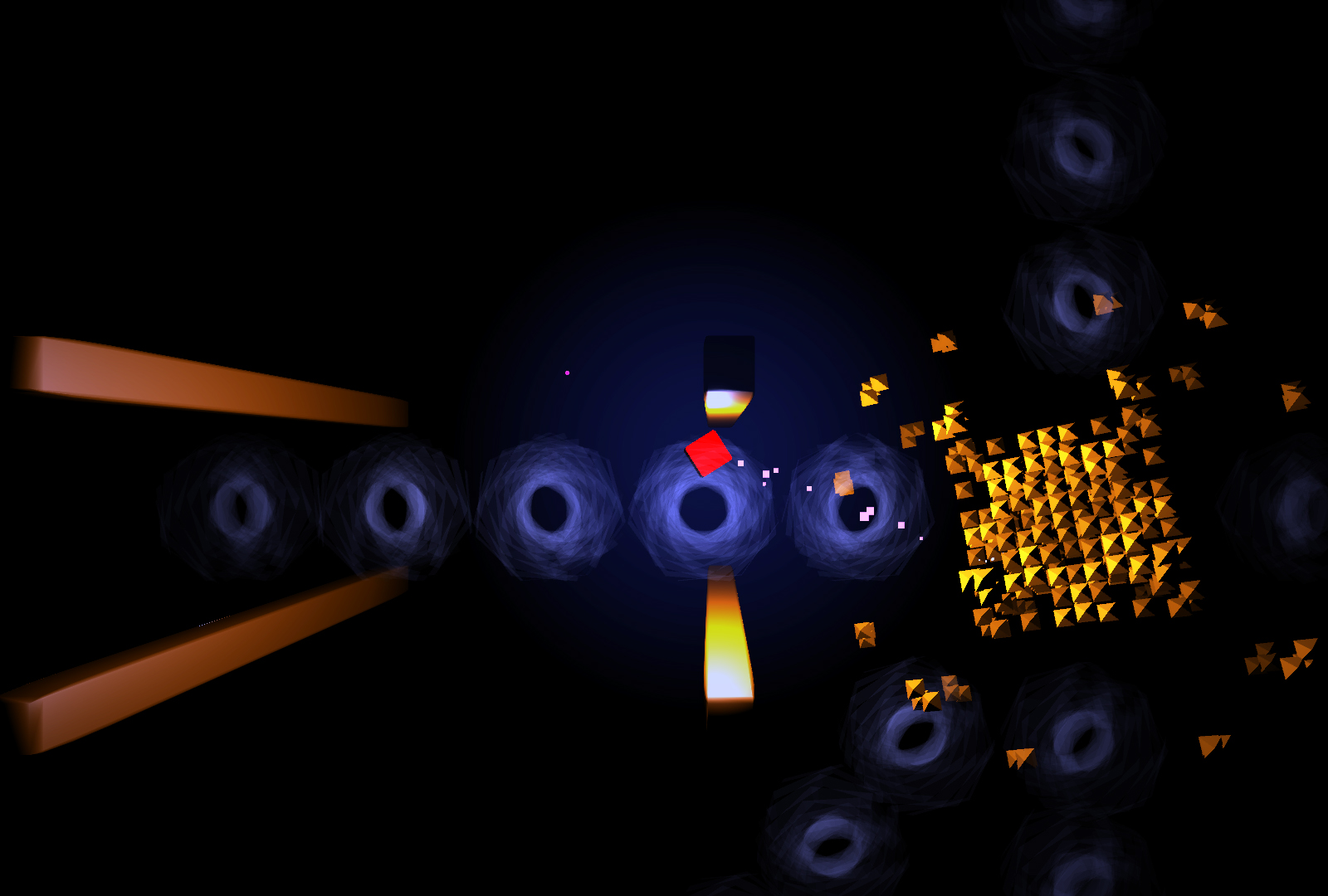 Based on these thoughts One Life Remains created the game Dive that is meant to be performed in front of an audience and where the player, while progressing in the game, produces a kind of a VJ show for the public who can enjoy it for its visual and sound features.

In a similar way to Dive, they are also working on a game called A Constant Move Forward inspired by James Turrell’s work, with the collaboration of graphic/game designer Arnaud Vannier. This game is designed to be played on stage. At any moment the performer/player can lose and end the performance (it is a real game after all :)).


It’s not because a game is “experimental” that it won’t sell or make money. It’s just you needs to be creative and experimental  - to earn your living.

Super Tiny Leap was more “commercial” than One Life Remains' other titles so far. Even if the game got good feedback, it did not sell well. When it comes selling such a game it’s not enough to just know how to design or to develop a game on mobile. You also have to know how to market it and to communicate about it.

Doing experimental games is like doing research, you follow a hypothesis, a concept or an intuition but you’re never sure where it might lead you at the end. Unlike commercial games where you know that you’ll focus on a dedicated platform, specific audience or certain selling-metrics to market your game, experimental games aim to answer questions you want to ask.


If your game ends being a giant installation for outdoor or to be played on building façade this is not the kind of game you’ll sell easily on Steam, Desura or other similar game distributer.

Developing for Mobile or PC is something the collective would like to do at some point. Currently their priority is to work on atypical showcase devices in festivals, indie parties or digital art exhibitions. One of their last games is called 1000 Galantes. It is a local multiplayer game for 25 players who are using laser pointers as controllers. To play the game it’s mandatory to have a big space with no source of light, a large screen like in a theater and a good sound system. This type of a game is really hard to imagine being played on tablet, smartphone or even personal computer at home.

The next big experience

One Life Remains has several works in progress. The fresh one is called Slam of the Arcade Age. This is a mix between Track n’ Field and B.U.T.T.O.N. (Copenhagen Game Collective) with some fragments from physical skill game Twister in it. Slam of the Arcade Age was presented in November 2003 for the first time during Eniarof, a festival about modern carnival, art curiosity and weird games in South France.

Slam of the Arcade Age is a true “punk game” which is played with destructible controllers. Every few games, the designers need to repair the installation with colored tapes and soldering.


This aspect (punk game) is an integral part of the experience. At the end of the event the playing field is like a post-war battlefield.