The 5 Myths of the Indiepocalypse

The hot topic for independent developers these days is the so-called “indiepocalypse”, which is the notion that the heyday of indie games has ended. Ryan Clark disagrees, and in this article presents counterarguments to the 5 "indiepocalypse" core tenets.
Ryan Clark
Blogger
September 08, 2015

The hot topic for independent developers these days is the so-called “indiepocalypse”.  It’s the notion that indies are going to have an increasingly difficult time making a living now that mobile and Steam are both “flooded” with games.  Indiepocalypse posts tend to focus on 5 key ideas:

I contend that the “indiepocalypse” is a myth, and that these 5 ideas are misleading in subtle ways.  I will respond to each of them below.

The advent of Steam Greenlight and the subsequent “opening of the floodgates” has scared many independent developers.  If you were able to get your games onto Steam pre-Greenlight, why would you want Greenlight to come along and increase the total number of your competitors?  Surely this is bad!

You need to make a noteworthy game that sells well in order to succeed on Steam.  This was true before Greenlight, and it is still true now.  The only difference is that the playing field is now a fairer one.  In the past there may have been some unlucky games that would have sold well on Steam, but weren’t selected for curation.  Conversely, there were some games that sold poorly, but were lucky enough to have been selected.  Valve aren’t omniscient.  They can’t perfectly predict how well a game will sell.  But that luck factor has now largely been removed, and I don’t see how anyone can reasonably complain about that.  Those non-selected developers were always there, making their games, hoping to get on Steam, and failing.  They sold their games from their websites and other portals instead of Steam, but they were always there!  They were competing with you for curation, but you didn’t notice them because they were less visible, off of Steam.  You still compete with them now for those same slots; little has changed!

The one complaint that I think makes sense is that the “opening of the floodgates” will entice more developers to try their hand at making a game for Steam.  These developers may previously have been deterred by the opaque curation process, but post-Greenlight they are entering the fray, eager to compete.  Have a look at this chart of Steam games released each month, from @TonyPlaysGuitar: 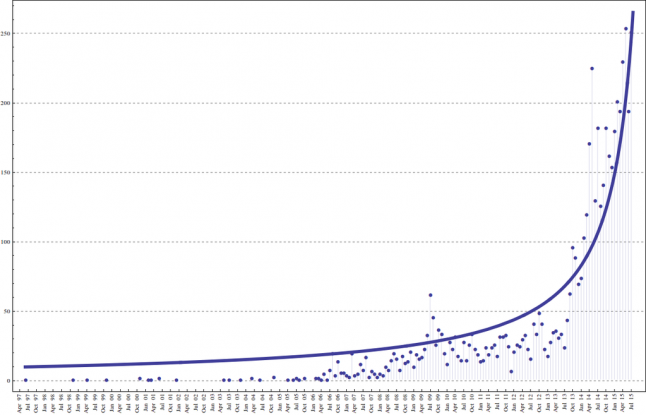 This chart is scary!  But it’s also kind of hilarious.  It reminds me of a quote from Disco Stu from the Simpsons. "Did you know that disco record sales were up 400% for the year ending 1976?  If these trends continue… "  The point is, this trend can’t continue.  Clearly we will not get to a situation where all humans on earth are making games for Steam.  @TonyPlaysGuitar has pointed this out himself in an article, but the tweeted chart alone has caused plenty of fear.

Also, the chart is misleading.  It makes you think, “Oh!  Look at all those new people who are now competing with me!!!”  When in fact, a great many of these new games are shovelware or back catalog titles that people are now putting on Steam because it’s easy to do.  I have a number of indie friends who are currently uploading their back catalogs.  Why would you NOT put your older games on Steam and get a slight boost of revenue?  But the point is, the vast majority of these “new games” are not your competitors.  “Fishie Fishie Learns to Count”-type shovelware games are not your competitors.  Back catalog indie games from 2008 are not your competitors.  (If they were blockbuster indie games they would likely have made it on to Steam already.)  There may be some legitimate competitors who have recently joined the fray, but they are far fewer in number than many fear.

But what about THIS scary chart from @Steam_Spy?: 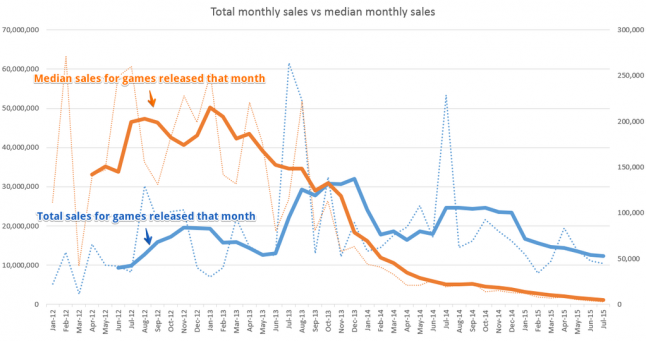 First of all, what does this chart really represent?  The orange line is showing the number of copies sold by the average game released in a given month.  Its slope is scary; we don’t want game revenue to decline like that!  However, there are two misleading factors at work here:

Charts like these are interesting and helpful.  It’s always better to have more information!  But make sure you think about what they are really representing, and what outside factors may also have had an impact, before you draw any conclusions.

Some people fear that, by “opening the floodgates”, Steam will turn into the App Store.

It seems that the reasoning behind this is:

I’m not aware of any evidence that “being open” is the reason that the App Store is the way that it is.  The internet is even more open; is it like the App Store?

The perceived problems with the App Store are its visibility issues, low pricing, poor quality games, and hit driven nature.  Why isn’t Steam like that?  (Well, it is in some respects, but not to remotely the same degree.)  I think it’s because of the audience.

As a Steam (and console) gamer myself, it’s rare that I buy a game that I discovered solely on Steam’s front page.  Instead, the front page is more like a reminder to me: “Oh yeah!  I was interested in that game.  Looks like it’s out now?  Awesome!  I’ll buy it.”  Mobile games are (typically) smaller and have shorter dev times, so there is less pre-launch hype.  Additionally, I don’t think that your average mobile gamer spends as much time on gaming websites, blogs, twitter feeds, streams, etc, as a Steam or console gamer.  So how do mobile gamers find out about new mobile games?  Via word of mouth, or on the App Store itself.  This magnifies the hit driven nature of the App Store.  Since Steam and console gamers actively seek out information on upcoming games that interest them, they are naturally going to be aware of a greater breadth of games.

In the last few months there have been a some high profile indie game launches that generated lower sales than expected by the press or by developers.  I think this has shaken peoples’ confidence, and has caused more people to buy into the “Indiepocalypse” meme.  But could there be reasons other than “indiepocalypse” for these occurrences?

First of all, it has only been a few games amongst a sea of other releases.  It is not yet a statistically significant phenomenon.

Secondly, there are far more high profile indies now than there were 5 or 6 years ago!  And they are starting to make follow-up games.  It is only natural that some of those games will not achieve the same spectacular sales results as their predecessors.  If these games had been launched by unknown developers, the press and twittersphere would not have paid attention to the launch numbers.  No fear would have been generated. 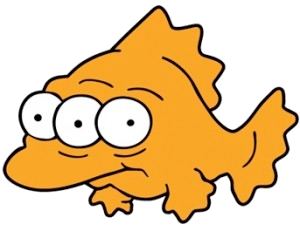 And lastly, we come to the “Triple-I Big Budget Indie” hypothesis.  Some are concerned that, since AAA games saw budgets balloon over the past 20 years, independent games are doomed to follow that same pattern.  This will make it harder for cash-strapped new comers to compete with established triple-I indies, and it will make life a lot more risky for the triple-I indies themselves as their projects grow in scope.

But if AAA games saw this trend of ballooning budgets, does that mean independent games must also follow suit?  Only if the cause of the AAA budget boom also affects indie games!  But AAA budgets grew largely because of hardware improvements.  With each new generation of consoles and computers it became harder and harder to create cutting edge games.  If an NES game looked like an Atari game, it would not have sold well!  If a new PS4 game looks like Doom, it will not sell!  Or maybe it will… if it is innovative in some way. And that is what indie games do.  People do not purchase indie games for their cutting edge (lagging edge?) graphics, they do it for the gameplay.  They do it because indie games are innovative, or because they serve a niche that AAA games do not serve.

Some of the biggest indie hits in recent memory were made by relatively small teams.  Look at Risk of Rain, Banished, FTL, Democracy 3, Papers Please, Rogue Legacy, etc.  (The Rogue Legacy guys even gave a GDC talk about how minuscule they managed to keep their budget!)  Indies don't need to be bleeding edge like AAA.  The forces that pushed budgets up in the AAA space do not exist in the indie space.

When people discuss the indiepocalypse, they are likely trying to help you.  They want you to make an informed career choice, and avoid financial ruin if the indiepocalypse comes to pass.  This is admirable and I applaud their efforts.

But to me, being an independent game developer has always been an unwise career choice.  I have seen many astoundingly talented friends leave the indiesphere, and game dev altogether.  Talent is a requirement, not a guarantee.  The rate of attrition is high.  But I went indie full time in October 2004 when Steam was not selling 3rd party games, XBLA didn’t exist, and times were tough.   By comparison, the situation in 2015 is goddamned indietopia!  And there is no doubt in my mind that 2016, 2017, and beyond, will continue to be significantly better than 2004.  Plenty of us were making a living even back then, so it is certainly achievable now, and will still be achievable for the foreseeable future.

It will be hard.  You are insane to attempt this.  But if this is really what you want to do, do not be deterred by the spectre of indiepocalypse.  Be deterred by something else :)

Do You Want To Know More?

I will be writing additional articles outlining the methods that (I believe) have helped me survive for as long as I have as a full time indie.  They’ve helped me succeed even during the difficult environment back in 2004+, and they’ve helped me to create very successful games like Crypt of the NecroDancer.  I’ll tweet when each article goes live, so drop me a follow on Twitter!