The 3D Backlash: is it Real, and Who Gains From it?

Everybody talks about the 3D customers, the manufacturers, and the content makers. Who really has the most to gain from a 3D backlash...if there is one?
Neil Schneider
Blogger
August 24, 2010

I've been playing video games for a long time, and out of all the technologies I have seen hit the market, I have never witnessed a seemingly organized movement like the one against stereoscopic 3D gaming.  While I admit that I am very biased because I have been enjoying 3D for several years now, it's amazing to see how much time and energy is spent on trying to tear it down.

This backlash isn't driven by customers or game developers.  People aren't picketing in the streets against 3D, and top game developers have all made positive efforts towards its long term success.

In my opinion, by far the biggest interest group (yes, they are an interest group) working against 3D are segments of the gaming media.  Instead of just ignoring or downplaying the technology, some writers seem to take a no-holds-barred fighting stance against it.  Today, I'd like to talk about some potential reasons for this.

Let me be clear that many people legitimately don't like 3D.  An estimated 10% of viewers can't see it properly, and it's only in recent years that 3D gaming experiences are starting to become both comfortable and customer-friendly.

"What may be even more discomforting than the above is looking at your credit card bill after you’ve bought a 3DTV. That’s gonna leave you feeling confused and very possibly forlorn. `I spent that much for this? Oh, jeez.'" - CrunchGear

There is also a concern that 3D is a big cash-grab; a gimmick to create a false justification to buy a new HDTV or computer display.  Beyond making HDTVs bigger and adding more pixels than the eye can see, are display makers out of ideas?  Is 3D just a magician's rabbit to excite the crowds?  I say no.

3D has always had its stereoscopic 3D clubs and video game communities.  The demand and interest is very real.  Even the 3D of the 50's and 60's was driven more by enthusiasts than executives.  What makes modern 3D different is the technology is much better, and there is a concerted effort to properly standardize and market this.

"Having played several games in 3D at various events over the past few months, allow me to say this: meh. At no point did I play a game in 3D where I reacted like Homer’s mother seeing Joe Namath’s sideburns.  That is, at no point did I go, `HOLY SMOKES THIS IS LIFE-CHANGING.' Neat? Sure, it’s neat, but if I never play another 3D game it won’t be so big a deal." - CrunchGear (again)

So what's with the over the top anti- 3D rhetoric?  The first step is getting into the mind of a gaming media publisher. 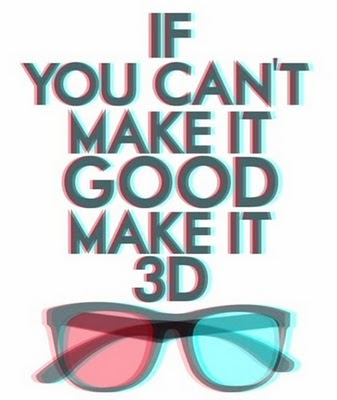 Content is king, and with traditional 2D gaming, a tier-one website or publication would be very lucky to get preview copies of games a week in advance of release.  The goal is that their reviews are up when the game hits store shelves, and similar to the early bird getting the worm, the privileged websites and magazines get first dibs on the advertising traffic associated with a first-look game review.

If you aren't on the coveted tier one list, you can still get copies, but after the game is already released.  Advantageous from a money savings point of view, but unless you are really unique with your coverage, your publication's content value is disadvantaged.

"Many of us really aren't sold on this whole stereoscopic 3D thing -- whether it be for movies, sports, or even gaming -- like, at all. But hey, that's not going to stop companies like Sony from pushing forward with the trend while it's still all up in our faces." - Destructoid

Now, how long does it take to do a proper game review?  If you want to get a feel for the game, estimate at least ten to fifteen hours of game play.  Then you have to write the article and capture screen shots - so estimate at least another day of work for this.  Easily three days per game review, give or take a few hours.  You will probably have to do a separate article for PC, but console expectations should be the same for PS3 and Xbox.

Now that 3D is knocking on the media's door, how hard could it be? The first requirement is getting the 3D equipment.  While manufacturers can send hardware samples out to some, they can't supply everyone.  Many journalists are lucky to get a 30 day loaner for review purposes, let alone equipment they can keep!

A single 3D HDTV isn't going to cut it, either.  You're going to need at least two complete 3D PC kits, and one 3D HDTV for console (shared by Xbox and PS3).  All this equipment is needed for just one cross-platform game review...per writer.  I'm just going to throw a number out there, and say $6,500 US for the 3D HDTV and two gaming PCs with glasses.  You can't just have a central lab either because a lot of reviewers work freelance.  So, estimate $6,500 multiplied by the number of writers plus a lab.  A publication that will remain unnamed has about twenty people listed with the title of "editor" on their US team.  How many freelance writers do these editors have to oversee?  How much money will it cost to equip these writers?  Something to think about.

Why is modern 3D falsely associated with red/blue glasses?

The next step is finding the right talent.  We live in a world where pundits still show red/blue anaglyph glasses on people's faces - glasses that have nothing to do with modern 3D.  Reviewers need to learn about the available technology, how stereoscopic 3D works, and what experiences to watch out for.  Time is money, and this is a lot of pressure I'm sure.

3D game reviews are extremely time consuming.  Speaking out of experience, we play the game, then we have to test it on three different PC solutions, and ultimately look for anomalies and visual flexibility.  You can't just play a title for three hours thinking that this is how good it is.  On PC, you can easily find anomalies and problems several hours into the game, so it's best to finish it if you can.  Even with save-games to fall back on, you can easily double the normal time invested.

Console will definitely be more out-of-the-box, but will XBOX and PS3 play the same way?  We don't really know yet.

Now, remember what I mentioned about the advantage of having preview game copies and getting first dibs on the advertising traffic?  Suddenly that available window of time isn't big enough!  Someone is going to need to hire more staff.

Now I'm sure someone is going to splash water on my conspiracy theory because the media has been super excited about Nintendo's 3DS.  Surely this proves to the world that the gaming media are supportive of glasses-free 3D technology, and the glasses are all that prevent media acceptance!  Not.

What makes Nintendo 3DS attractive is it will be dirt cheap to disperse to its writers, it will likely offer a cookie cutter 3D experience, and it perfectly fits with the media's business structure that already exists.  If the 3DS was a console that came with a full resolution glasses-free 3D HDTV that required equipping to all their writers, I think their response would have been very different.

Let me conclude with a few final points.  This article isn't a criticism of the gaming media, and I'm not trying to make generalizations.  I just think there are some business forces at work here, and they have reasons for pushing their agendas forward.  3D is a real hurdle for some.

The biggest responsibility for this challenge falls on us, the stereoscopic 3D gaming industry.  While standardized quality expectations, equipment, compatibility, and ease of use will help the customer first, it's the gaming media who are the leading points of contact.  While the industry's parts are very close to working together, the gears need to mesh much more tightly.

"Motorstorm Apocalypse Makes A 3D Believer Of Me" - Kotaku

The good news is valuable steps are being taken to solve these challenges.  Initiatives are in development to help standardize gaming quality expectations, and to get an accurate read of what customers want in their 3D gaming experiences.  While this article was quick to point out current challenges, I can tell you for sure that 3D coverage has grown more informed and positive towards 3D technology - even by those featured here.  Finally, there are growing 3D gaming communities out there to lend a hand to anyone who needs it.

It's important to point out that thanks to modern standards like HDMI 1.4 and the BluRay 3D standard, customers can buy a 3D HDTV with the confidence that a wide variety of 3D content is on the way and will work with their display.  This article is more about industry growing pains.  The same way movie studios and game developers are facing new product development costs, the gaming media are under the same pressures and are attacking them the way they know how.

3D impacts the entire supply chain right down to the media level because it represents an entirely new division - a new class - of gaming content.  Now we just have to find creative ways to turn these mountains into molehills.