Steam reviews are changing (yet again)

Steam just published a post with news regarding how ratings are displayed on the store page, something that is already affecting many developers. Here's what you need to know about it!
Luis Diaz
Blogger
September 13, 2016

By now everybody knows about Steam's rating system. If you own a game on your library you may choose to give it a positive review or a negative one, which might help potential buyers guess if the game will live up to their expectations or not.

The rating system has been tweaked every now and then and, on one of the later updates, ratings were separated in "recent" and "overall", which is great for games that went through a recent update. If your product got negative reviews at some point you can still fix the issues and users will see that ratings have improved over time.

Earlier today Steam published a new post, informing of, yet more changes, to this system. You can read the whole text here(and you should!) but this image sums up why it's such a big deal for developers.

What does this mean?

Lots of users that own a certain game on Steam probably got it somewhere else. Maybe they funded the project on Kickstarter and got the key on an email, maybe they just bought it on itch.io, a game bundle or directly on the developer's web. If any of those users left a review (which in most cases tend to be positive) that vote will be ignored for the "recent" and "overall" ratings that appear on the top of the store page.

Users who didn't buy the game on Steam will still be able to rate it, but their reviews will only appear at the bottom of the store page, which requires to scroll down for a few seconds.

Why is this important?

Ratings are pretty much rulers of Steam sales. If you have "mixed" reviews, selling your games is going to get significantly harder, something that can drive out of business a small studio. That's why every small change on this system affects every developer with a game on steam.

Since the update was released, many developers have reported that they ratings have gone down, which will reduce their sales in the future.

Why did they change how ratings work?

It was a matter of time before developers started gambling the system. Many small games suddenly improve their ratings (as they were probably giving away keys to friends or random users in exchange for positive reviews). In some cases, reviews were just too shady and hinted that some people were even using bots for the task. 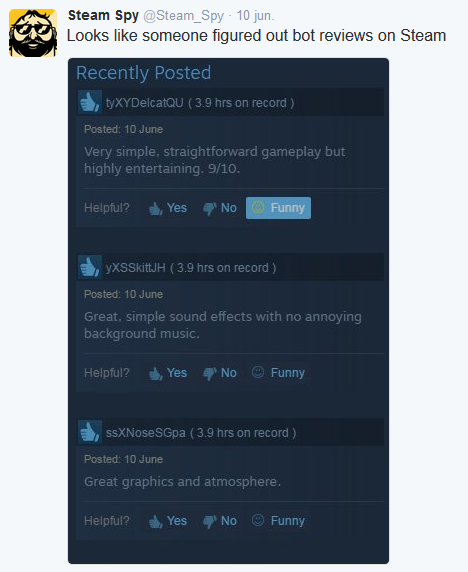 Developers may request as many keys as they desire from Steam, thanks to that we can put our games on bundles, crowdfunding campaigns and other stores. Some argue that this feature should be limited but then we'd be destroying all of this. Would people still back a game on Kickstarter if they knew they wouldn't get a Steam key? What about all those game bundles which wouldn't offer Steam keys anymore?

How can we fix this?

All Steam is doing is providing a service. Due to system gambling they were forced to tweak ratings in order to improve buyer's experience.

Unfortunately developers can do nothing to fix it(besides reporting the consequences of the update). It's up to Steam to decide if ratings need further tweaks in order to include the reviews that are being ignored righ now.

Many developers are already trying to come up with solutions. Displaying both ratings at the top of the page might do the trick, but it could also be confusing for anybody browsing the store; that might be the reason why Steam decided to bury the former ratings under the rest of the page content.

Are you a developer affected by these changes? Can you think of a better solution for everybody? Leave a comment with your thoughts!