We’re barely 4 working weeks into the new year and already this is a bumper update! Let's cover it all off, but pay some specific attention to Project Mercenaries.
Andrew Smith
Blogger
February 17, 2021

Yas! I still get a kick out of that name! Anyway, it’s exciting to think that we’re going to see an article on PC Gamer about Black Lives and the videogame industry as part of Black History Month - I was lucky enough to have a very long chat with Malindy Hetfield who is writing the article, and I’m hopeful that our work with Lillian and Jason on FF4K will feature in some way. Got to keep the hope alive! We’ll share it as soon as it hits.

Thought I’d pop some highlights in from the latest streams… there’ve been some cracking moments!

(context - a special quest requiring the player to kill baby spiders with a flamer, which had taken over an hour so far, and had only seen 2 flamers spawn in that entire time… dear reader, little did he know that he only needed one more spider kill!)

And then finally, sweetest redemption:
https://www.twitch.tv/videos/901760921

We’re so close to launching a closed beta! Today, this very day, the squad is putting the finishing touches (what a misleading phrase!) on the build that could/should/will/might be the one we share with a limited number of people to get feedback!

The game itself is very early, very limited, and very pre-alpha, but we want to make sure we catch all the nasty bits before we fire it out onto Itch.io under the Spilt Milk Shake label. It’s basically one level, with a few hints and hooks that show where we want to take the game, so while not a ton of gameplay hopefully it is fun and tantalising.

This is all very exciting for so many reasons - shipping another project that was driven massively by interns is a real moment for us, plus we’re testing a new game design we’re interested in taking (much, much) further so hopefully it resonates in the ways we plan for it to. Not to mention it’s a new game from us, launching in 2021!

We’ll be announcing more very soon, and of course if you’re a Quart or a Gallon you already qualify for this early play! Wahey!

Right here we’re comparing how to colour the different units in the game, to keep them visible against the background, clearly differentiated from each other, but also not too ‘placeholdery’, for want of a better word. We went with the far right implementation, in case you’re interested. 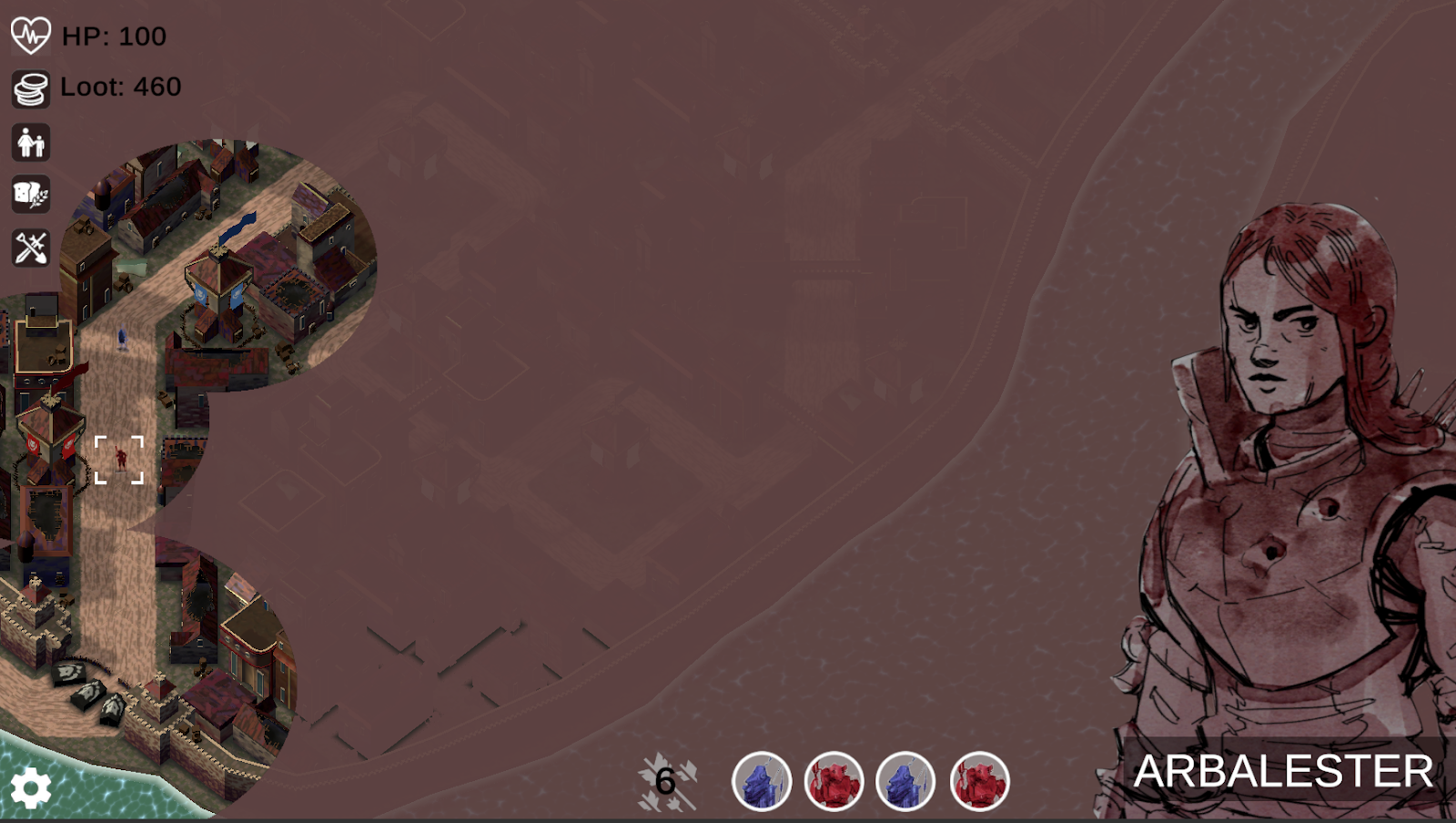 We also got fog of war back in, and decided to make it slightly see through to prevent the screen from reading as too blocked out. Visual interest is key to the pillar of exploration, and while we may end up recolouring it, right now we wanted players to see glimpses of detail without being able to make tactical or routing decisions about areas they had not yet visited. You’ll also notice some of Jake’s awesome character art, which helps bring one of the other pillars into play for us - each unit is a person, and we want to do whatever we can to build that relationship with the player. Not just that, but it looks badass, and is way simpler to achieve than 3D models etc. You’ll also notice we’ve got unit selection buttons, resources, and a special ability all displayed on the HUD. What’s an Arbalester? Wouldn’t you like to know.

And here’s a little behind the scenes at the Fog of War and how we implemented it. There are actually 2 ‘layers’ of fog in the game - one is very heavy and covers anywhere you have not been, while the other fills back in over areas you’ve been but don’t have direct line of sight to, which is much softer and easier to see through. Both types of fog hide enemies!

Looking more closely at the Unit Selection Buttons on the HUD, these populate and display as you buy units at the Encampment. It’s important to let the player have flexibility in how they interact with a game like this - units could be offscreen or under a UI element, some will be in Towers, others running around in the streets so you won’t always be able to locate them in-world. The player can select them either by clicking on the unit itself, or on these UI buttons. The units themselves are quite small and the camera quite zoomed out, so this also works well for people who find it too fiddly. Finally, it gives you an at-a-glance check on how many units you have - maybe you lost track of a fight and need to see if you lost a crucial squad. The final game - whatever it turns into - may well have camera zoom or a change in camera position, so these solutions should survive and help us in the future.

We’re still smashing our way into the Big Secret Project, and are planning how and when to unveil it. Stay excited! It’s a really amazing thing we’re building, and it combines a new opportunity/challenge for us, while being something we care about deeply and believe in 100%. Argh this is killing me! Moving on, before I let it slip...

We’ve got 3 more interns starting next week, which is incredibly exciting! We’ve got an Artist, a Producer, and a Marketer helping us out for about 11 weeks, so in the next update we’ll introduce them and hopefully show off their work! Naturally we’re throwing them in the deep end and getting them to help us on our active projects, which is exciting and terrifying in equal measure I’m sure.

We’re also still hard at work with some clients, and have actually just signed a new contract. I can’t talk about it at all, other than to say it’s a pretty badass project and we can’t wait to help make the game as amazing as we know it will be. Eventually we’ll be able to spill the beans!

All of this reinforces our ability to punch above our weight and to bring in the sort of funds we need to keep the team going for as long as possible. Our Patreon is a key part of that too, so thank you to everyone who helps us out, however small the amount! It all has a genuine and measurable effect, and we love you for it.

That’s it for this month! Let us know if you’ve got any questions, and as ever, stay happy!

Why not sign up to our Patreon and get this plus a whole lot more way earlier?
Please do buy, play, and leave a review for Tango Fiesta & Fascism Fighters 4000 - you’ve no idea how valuable it is to us. And send us feedback too!
Get your claws on King of Crabs (it’s free!), clobber some players, then leave a review on that too!
Go play Super Doom Wall! Can you leave a review? I don’t know, but try anyway!