Keeping up communications and a relationship with your fan-base is time consuming. Which is why I decided to hand over management to our new marketing expert at Lo-Fi games and focus on creating game content.

In all honesty it's tough giving it up as I genuinely love Kenshi fans (I also tend to use marketing as a vehicle for procrastination when I get stuck with writing!). I love the geeky stats, watching the community grow, making my own dumb memes and just generally having fun among the (equally as sick as me) community.

Though I'll admit, it has its stresses that I won't miss: Feeling like a human meatshield between the players and developer team. Or wording something slightly wrong so it gets misinterpreted and gamer-wrath rears its ugly head like a raging snowball of crazy accusations that's all your fault and omg you've totally failed your boss and everybody in the world hates your company now and you're eating dead rats out of bins amongst the rubble of your post-apocalyptic office. 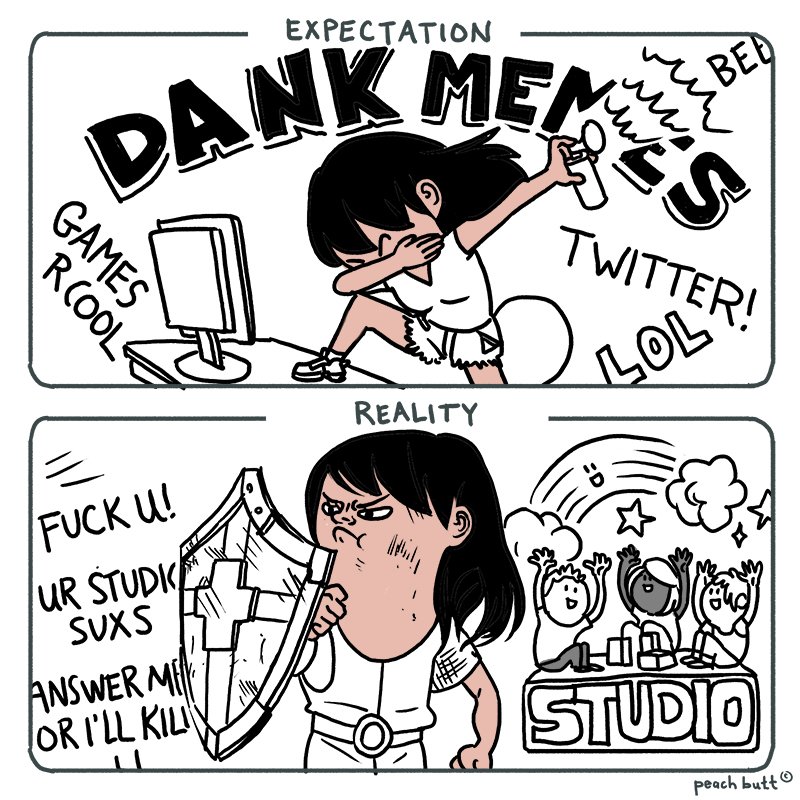 So here's a few little things I've learned over my last five years at Lo-Fi...

Growing your community with social media

We all have our own marketing styles, but this guide covers what I feel has worked for me, and also what I prefer to follow as a consumer myself. This is my style. Some might call it unprofessional shit-posting but, me, I think it a bit more human. You do you, only you know your company values and style. But my general rule of thumb is: Would I follow this myself? Would I want to share this post myself?

What do you want to achieve from your outreach first of all? At the very beginning that might be simply visibility or growth, reaching out to new potential fans and making them aware that you exist. It's also equally important as a tool to simply engage with your community and keep their interest, especially so as your audience grows in numbers. You want to give them the news that they want. Community management and social marketing both come hand in hand.

My favourite social media channels to market with are Twitter, Facebook and Instagram. You're going to get different customers with different social media preferences so it makes sense to cover all your bases. Reddit is one hell of a powerful tool as well, more so than any other in my opinion, so it's good sense to set up a sub for your game nice and early. However I personally think the content is best left loosely to Reddit users most of the time. Tis the way of Reddit to not disturb the mysterious and almighty equilibrium.

Of course you can also consider setting up a Twitch account, YouTube or Discord as well. The more bases covered the better!

Have you ever unfollowed somebody because they clogged up your news feed with their 30 tweets a day about, maybe like, a pigeon that looked at 'em a bit funny or the dodgy hotdog they ate for lunch? We actually want to see what everyone else we follow has to say as well, right? But equally, you've gotta compete and stay afloat within that sea of extroverted people tweeting over eachother, or else you'll get swallowed up and forgotten. Over-do it and people will unfollow you, but under-do it and you'll slip through the cracks. Here are my personal preferences when marketing:

Try and make time. I feel for solo devs, I really do, I think it's an amazing feat to juggle so many things running a game company alone (respects to all the solo devs reading this). But gamers love to throw around the 'A' word. It only takes a month of forgetting to post on just one of your channels before you start seeing the 'OMG IT'S ABANDONED I SHALL SMITE THIS DEVELOPER FOR ETERNITY' posts. So even if you can't post as frequently as mentioned above, try and schedule something in advance (for example with Hootsuite or Tweetdeck) that's at least once per month on all channels, especially if you're a Kickstarter or Early Access.

Love your followers; don't treat them like walking money sacks. I strictly avoid repeating self promoting, salesy tweets like a broken record. People are likely following you because they're already hooked, there's no need to pummel them with daily sales pitches. So don't lose your old followers (or get the mute treatment) in a bid for new ones by boring them to death with braggy posts or repetitive release announcements. Make your account actually appealing to follow.

But I don't have a fan base!

Don't sweat it. Use those hashtags and mentions to get people to notice you, just make sure you have an interesting enough feed for people to want to follow when they do check out your feed. If you really want a little boost in the beginning you can pay a small amount of money (about $15 per month) to gain around 250 followers with tools like Tweetfull. This isn't the same as buying followers in bulk (I don't approve of this as they're usually fake followers which has no long term benefit and messes up your engagement rates), but instead just auto follows and likes a target audience. I see it as just giving potential players a little poke to show you exist.

Set it up to follow similar games or indie game news accounts, and to like relevant hashtags to you. Just be aware that it might be a bit spammy since Twitter changed newsfeeds to start displaying likes and follows more often. I used this to boost our first 1k followers, it was effective but not ideal. So yeah, not a long term solution but a nice little jump start if you need it, it's like a low budget form of advertisement. Also, follow-backs are kind of annoying to users and something just feels a little dirty and cheaty about it.

People are more likely to share things that they find funny or interesting, so don't be afraid to make your own memes and funny posts. It's important to work on your tone of voice for each social channel and stay consistent with it. How about a theme? One of my fellow Bristol developers, Rumpus, tweets as his Victorian Detective game persona and I love it. And for our own Instagram account, I ended up creating a kind of parody account that followed a Kenshi character in standard Instagram-y situations and hashtags.

And that's it! This is what I've learned over the last five years of growing the community for Kenshi. I tend to veer towards 'respect your fans and be a decent company' over being aggressive, but that might make my marketing style less effective than more business-minded marketers - so keep that in mind.