Skylanders and the Birth of the Toys to Life Market

The Skylanders series has become very popular thanks to also being the start of the Toys to Life Market. For today's post, I'm going to examine this phenomenon and what Toys for Bob did to turn the brand into a winner.
Josh Bycer
Blogger
August 25, 2015

It was only a matter of time after collecting the Amiibos that I wanted to look at the other big players in the Toys to Life Genre. Thanks to a sale, I managed to grab the starter pack of Skylanders Giants and looked at the brand in detail. Examining Giants, I can see why the series has been a massive success for younger audiences, but I think it's missing the hook for older ones as well.

To begin, let's briefly talk about how the Skylanders series got started. After the Spyro brand lost its place in the market, developer Toys for Bob got the go ahead to revive any Vivendi brand and chose Spyro as a springboard for their Skylanders concept. The idea was to use collectible figurines as characters that people could buy, collect and play with in the game. To say that it worked was an understatement; the Skylanders brand became one of the fastest growing in recent years and Activision reported a profit of 4 billion dollars in 2014.

There are several elements as to why the series has taken off and we're going to examine each one.

Skylanders was the first Toys to Life game and Toys for Bob brought a lot of the strategies and marketing for toys to the Game Industry. First was the fact that each figurine was unique and presented well. The advantage of the Skylanders brand was that Toys for Bob created it out of nothing, meaning that they could design any character that they wanted without it conflicting with a preexisting brand or style. This made them attractive to kids who wanted to play with them and adults who could display them as you would any other action figure. 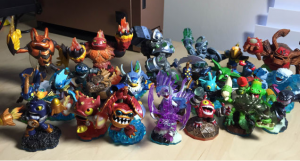 Toys for Bob have created a very attractive toy series with the Skylanders, thanks to quality designs and the functionality they provide in game

The collectible aspect was a big deal and Toys for Bob became the bane of parents everywhere with creating rarer figurines and store exclusive ones. You had those that would light up, larger versions or have flasher aesthetics, and they even made ones that could talk in later games.

These figurines would be great on their own, but it was Toys for Bob's use in the games that made them achieve mass popularity.

The point and major draw of the Toys to Life genre is how these figurines interact with their respective games, and Toys for Bob came up with a brilliant solution/marketing plan. Each figure was grouped into one of 8 elements, like fire, water, air etc. Besides that, each figurine had their own stats that would improve on use, along with special attacks and upgrades exclusive to them.

In order to beat the game completely, you needed at least one of each element type, as there were areas that were locked to them. Some areas gave a bonus to a specific element type, rewarding players who had it but not punishing those that don't. With single set figurines costing about $4 a pop, accessing every area in the game without any other figurines would cost about an additional $32. But here's the kicker, every figurine made for the game can unlock specific challenges and get special moves, allowing someone who collects more figures to have more content.

You could bring your figurines and base over to a friend’s house to have co-op play, while continuing to improve your character for when you are back on your version of the game. The figurines became a form of physical DLC that provided content to the game and could be displayed when you weren't playing. Another smart move was compatibility with later games in the series; each game's set of skylanders was forward compatible. This preserved the functionality of the figures and increased their collectability thanks to retaining their use for later games; so a rare figure in Giants, would be even rarer if you brought them out for Trap Team. 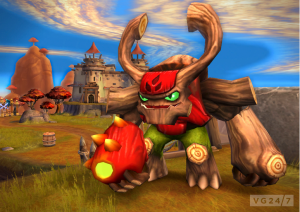 Each game introduces new Skylanders and designs, but the basic gameplay remains the same

While the figurines themselves were forward compatible, the bases weren't. This was because each game came with a unique twist on the formula that required a new base to make use of; Giants had the larger figurines and Trap Force has the ability to capture enemies.

All in all, Toys for Bob created a very attractive series for collectors and younger gamers with one of the best marketing strategies. With that said, there are a few things that I think hurt the series (at least from my time spent in Giants) in terms of being something that older gamers can enjoy.

My main problem that I have with the series from a design standpoint is about the gameplay. I've said this before, but Nintendo is still the king of developers when it comes to creating games that are appealing to multiple age groups thanks to clever game design. I could stop things right here and launch into a 1,000 word rant about this topic, but for time's sake; Nintendo's design seen in the Mario series allows multiple skill groups to make progress without hindering either, while gradually training lesser skilled players to become better at the game.

The important distinction and one that I talked about at length in a post examining Nintendo vs. Traveler's Tales' philosophy is there is depth in the game for people who want to find it. Someone who is amazing at Mario is not going to have to sit through repeated cutscenes or take the slowest way through a level; they can speed right through it using advanced moves to create their own shortcuts. 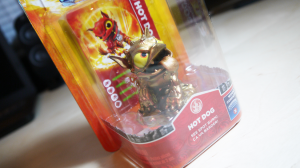 Rare figurines not only looked different, but also showed up differently in game. This increased their collectible value for consumers

In a Traveler's Tales game however, everyone has to take the same path through the level, stop at the same cutscenes and repeat the same level designs over and over again. With Skylanders unfortunately, Toys for Bob has gone with that M.O. for design instead of Nintendo's.

To be fair, there are advanced challenges and secrets for people who want to find it all, but they don't come anywhere near the challenge and variety that Nintendo had with the optional levels in Galaxy or Mario 3D World.

One thing to point out as a potential reason is the fact that the Skylanders series is a victim of its own success in this regard. If they were just designing a game for one character, they could make it as complicated and fleshed out as they wanted.

However, a Skylanders game can have at least 40+ characters that all have unique special moves and stats that the game must be designed around. I haven't played Infinity yet (at this point it's a matter of when,) but I'm curious to see how that game handles the different figures.

Toys for Bob deserves a lot of credit for taking a brand that no one wanted anymore and turned it into one of the best selling series and marketing strategies seen in the Game Industry yet. With the Skylanders series continuing to grow and now they are doing more collaboration with Nintendo thanks to Wii-U unique Skylanders for their next game, I'm very curious to see what the future holds for the Toys to Life Brand.

(Check out Game-Wisdom for posts, podcasts and daily videos on Game Design and the Industry, along with my Patreon Campaign to secure monthly funding for everything.)