Raising funds via equity crowdfunding is novel and trendy, but a raise under the tried and true Regulation D may be a better choice for many indie developers. Read this high level breakdown of the pros and cons of each to make a more informed decision.
Kaiser Wahab
Blogger
September 09, 2013

By Kaiser Wahab and Lauren Mack

With the popularity of crowdfunding sites like Kickstarter and the federal government’s blessing of equity crowdfunding (“EC”), the recent trend to fund projects by seeking a little money from many may surpass private equity offerings as the new normal. Hence traditional Regulation D offerings (“Reg D”) that typically seek larger amounts from fewer investors may become the “alternative” funding path for indie developers. However, even when implemented, developers shouldn’t see EC as the sole nor best route for all funding needs, since Reg D has options and advantages that shouldn’t be overlooked.

To help developers make an informed choice, the following is a high level breakdown of the various pros and cons of EC vs. Reg D.

Note: For the TL;DR / quick version, there is a breakdown chart at the bottom.

To start, developers should note there is a major difference between equity crowdfunding (again, referred to as “EC”) and NON-equity crowdfunding.  The prime benefit of NON-equity crowdfunding is that it carries far less risk and overhead than EC will. The current non-equity crowdfunding model is merely a securities law workaround. Technically, since backers do not get a share of the revenue from game sales, this model is likely not governed by securities laws. Instead, backers receive the product itself, swag, and the “experience” of being part of the venture.  Hence this model is as close to the “best of all worlds” a developer can hope for.  If the developer’s title is popular enough, it might even see the type of traction that Double Fine Productions enjoyed.  However, in many cases where the developer’s brand or title strength is unestablished, the developer may need to provide backers the added incentive of sharing in revenues to get them to part with their money.

In contrast, EC will allow developers to take their titles/brand directly to the Internet to sell company securities (shares, units, etc.), thereby turning backers into true “investors.” This allows the developer to leverage its titles/brand to: 1) source investors via the Internet (eliminating the “chicken and the egg” dilemma); and 2) minimize the costs of a securities offering by leveraging a theoretically web driven toolset and the established infrastructure of funding portals.  However, taking on investors also invites the scrutiny of the Securities and Exchange Commission (“SEC”) as described below.

While EC’s advantages are often touted, little to no attention has been given to potential downsides.  (Note: I’m not a crowdfunding naysayer! I’m very excited about its prospects, but I am also sober about the cost and overhead considerations that will likely accompany it.)

EC requires extensive due diligence before any funds can be raised. Developers must disclose a host of information to the SEC at least 21 days prior to the first sale of the securities, including audited financial statements for raises of over $500,000. Once a developer completes a round of crowdfunding investment, it must submit reports to the SEC and investors at least once a year (or maybe more often depending on the SEC’s rulemaking). This means that not only will your lawyer be kept busy, but also your accountant. Due to the costs that come with complying with EC regulations, it may be difficult for startups without revenue or experienced managers to get a crowdfunded offering off the ground.

Funding portals also have a number of compliance woes that may impact developers. Perhaps the most onerous is that portals are required to conduct criminal background checks on company officers, directors, and any person holding more than 20% of the outstanding equity in the issuing company. This means the potentially embarrassing details of your personal history and background may be exposed in a way that is not necessary with Reg D.

Because there are caps to how much each investor can put into crowdfunded projects each year, a single developer could accumulate a large number of investors before hitting the total annual raise cap of $1 million. Keeping a large number of investors happy, informed, and engaged, will likely be difficult for any startup.  Moreover, now that backers will be investors with skin in the game, the chances of the crowd becoming restless if the project doesn’t go smoothly will increase.

When there is a real understanding ahead of time as to how many and how much investors may invest into a title or developer house, the decision into whether to use EC versus Reg D may be far easier to make. For example, if a developer needs to raise $500,000 for a new title and has a group of investors that are prepared to invest $50,000 or more each, that might be a much better fit for Reg D rather than EC, for the reasons outlined above.

Given the potentially onerous disclosure and compliance requirements that will come with EC, it may be more beneficial for developers to choose a Reg D offering instead.

1-      Investors Are Limited, But So Are Required Disclosures

The number of unaccredited (read: not filthy rich) investors is generally limited under a Reg D raise, but having sophisticated investors can benefit an independent developer. A company that successfully completes a private offering under Reg D does not have to file the annual reports with the SEC or its investors, unlike an EC raise.

There typically is no maximum amount of money that one investor can put in to the company under a Red D raise (subject to a cap on the total monies to be raised, if there is one) meaning that a company has more flexibility when it comes to how much each investor can give.

Companies and their partners, directors, and officers will face less liability for statements made under a Reg D than they will under EC. Issuers of securities under Reg D are subject only to the anti-fraud provisions of securities laws, whereas EC issuers are liable for the broader pool of knowingly making a material misstatement or omission.

One of the biggest drawbacks of Reg D (and one of the biggest draws of EC) is the requirement that most if not all of the investors be “accredited” (i.e., they qualify under SEC rule 501, which in a nutshell means they’re fairly wealthy).  Moreover, in most cases, the developer would need to be able to prove it has a “substantial and preexisting” relationship with those investors (meaning it couldn’t take out ads in the New York Times or send blast emails to advertise its offering).  This is aptly referred to as the “general solicitation ban”.  (Note: even with EC, the developer should not resort to a general email blast).

Lastly, when it comes to compliance, there is something to be said for taking the well-worn path. EC is new and exciting, but it will take time before the kinks are worked out, standards emerge, and all parties involved become comfortable with the process. Developers might want to think twice before entrusting the funding of their project to the tumultuous process that will be EC for the first few years.

Developers should take solace in the fact that they have more than one option and more than one tool for the job. While crowdfunding is a powerful resource, it likely will not render every other funding avenue obsolete. The developers that have a better grasp of the landscape and the tools will be that much more secure and ready to embrace investors so that they can focus on making the best games possible. 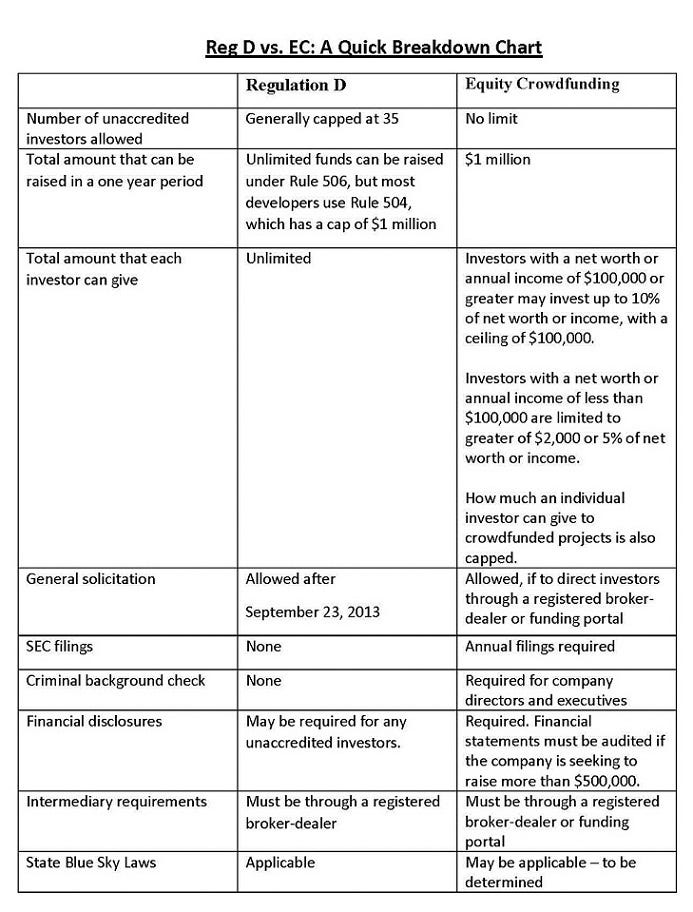