SEARCH
A minimum of 3 characters are required to be typed in the search bar in order to perform a search.
Announcements
Event
Free Webinar on 5/24: How Predictive Analytics Drives Mobile Conversions & Boosts Revenue - Register Here!
PreviousNext
Business
10 min read
article

Publishing a game on Epic Games Store: Three (not so) simple steps

Making sure your game reaches the widest audience used to be a straight-forward process: make your it available on the big digital storefronts, a few key retailers, and that was it. It all changed with Epic Games Store. How did we get there?
Anna Plisovitskaya
Blogger
April 15, 2021

Making sure your title reaches the widest possible audience is one of the key steps of video game development. It used to be a pretty straight-forward process: all you needed to do was make your title available on the big digital storefronts, a few key retailers, and that was it. In 2018, a new player appeared on the market; one that gave developers a massive range of bonuses and features. I'm talking about the Epic Games Store (EGS), the retail child of Epic Games.

EGS has garnered a devoted audience by setting high standards for the content it provides, which is hand-picked to create a "boutique" experience for gamers. The store offers impressive potential for marketing and PR, which is partially generated by the folks at Epic Games themselves. And the cherry on top of all of these benefits? The site offers lucrative contracts with developers and publishers. Of course, there's a caveat with all this: namely, that EGS has a complex and manual approval process. Obtaining an EGS developer account and releasing your game on the platform requires developers to submit a game pitch and have Epic Games approve it. 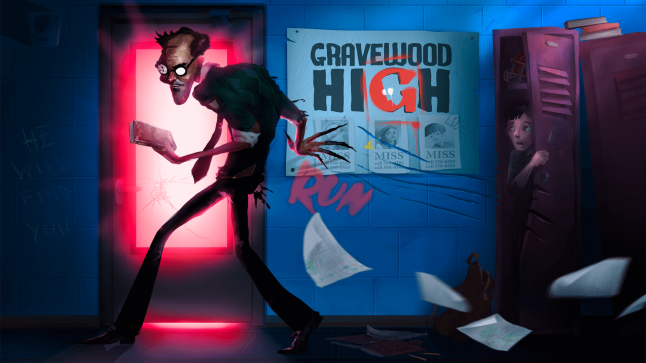 After following all of the steps required by Epic Games, we are proud to announce that our latest title, Gravewood High, will release on EGS this year, along with a simultaneous release on Steam. If you're keen on playing it now, we have also added a free demo on EGS here.

Do you want to know exactly how Herocraft PC achieved this? We'd love to tell you!

Step 1: Make the best game that you can

There's a good reason why I mentioned the EGS "boutique" approach to game selection. If you browse through the store's catalogue and peruse the exclusive games (including the timed releases), you'll notice a clear trend: Metro Exodus, The Outer Worlds and Borderlands 3 — one top-notch title follows another. But not all of them are expensive triple-A games, either. In fact, Satisfactory, John Wick Hex and Hades are all examples of indie projects with smaller budgets, yet they were all initially released as EGS exclusives.

Meet your competition for the EGS spotlight

We knew that our first EGS release had to be something smaller in scope but certainly of a high enough quality. It had to have clear gameplay, a memorable art style, and broad mainstream appeal. As luck would have it, we already had a title in the works that met all of those criteria: Gravewood High.

It all began when we were searching for a new game to publish and bumped into a little project called Arsonist by the EvilCo Games team. We thought the base gameplay was engaging and fun: the player had to start a fire in a building, dealing as much damage as possible within a given time limit. But there were a couple of issues:

We asked the developers to introduce an NPC enemy to the game, one that would hunt the player down and work against them. Both teams agreed that the new build, which included a firefighter as the antagonist, was much more fun. This change later spurred our decision to shift the gameplay's tone towards the stealth-horror genre and to rename the project Gravewood High. After all, who doesn't still have nightmares about their school years?

Arsonist, the prototype of what would become Gravewood High

Until recently, EvilCo Games worked on the project as a standalone developer with HeroCraft PC as the publisher. But with the recent economic downturn, the studio faced closure and the project threatened to go up in smoke. We had to do something. We had to save the project. Once the rights to the game had been settled, the original team of developers joined HeroCraft PC and work on the game continued.

Step 2: Study your field and study it well

If you're a triple-A game developer in a Western country and you want to make your way onto the EGS, well, you're set. But what do you do if you're several sequels behind the top competition? There's no doubt that EGS has a well-defined strategy for deciding who gets onto their platform and who doesn't, but what are their criteria exactly?

Having no access to this secret insider knowledge, we were forced to make an educated guess. And so we closely watched and studied the titles and game studios whose titles landed on the EGS storefront. Here are several factors that I consider crucial:

Gravewood High fits all three of the above criteria. It's a story set in a US school and has gameplay, not unlike Hello Neighbor (another title already on EGS). Moreover, it's perfect for drawing in teenage and young-adult audiences (Fortnite synergy, wink wink). Also, the game was developed on Unreal Engine 4 and will be available on the PlayStation family of hardware.

Based on these observations, we wrote and submitted a pitch for our game where several arguments supporting its publication on EGS were outlined:

But where can one submit such a pitch?

Step 3: Get in Touch, the Right Way

Sometimes, good networking is like a skeleton key that unlocks a world of possibilities. The developer of Kine–one of the first EGS exclusives at the store's launch–shared the story of how her small title made its way onto the storefront. She made no secret about it: she was a long-time friend with many of the folks at Epic Games and worked closely with them for years.

And if you don't have this option at your disposal (don't worry, we didn't, either), our best advice is, well, keep looking. It took us several months to find the right contact that could open the magic door.
We started by filling in the official EGS game submission form on the storefront's website. Then we waited. And waited. And waited.

But alas, none of our new contacts were directly involved with EGS, nor were they able to directly refer us to anyone who was. We were faced with the hard facts of how American corporations operate: duties are tightly defined, guidelines are strict, and departments are separated from one another by well nigh impenetrable barriers. We did, however, get the advice to submit our project to the Epic MegaGrant competition. That sounded reasonable enough. After all, some of the jury members represent the store itself, and the contest is a step in the filtration process that winnows out EGS titles from other prospective games.

Hoping that the third time was the charm, we set our sights on the 2020 Epic MegaGrant and submitted a contest application with a description of our project. Although we weren't awarded the grant, we did establish a connection to Epic Games.

Most of our earlier attempts to make contact hadn't amounted to much, but we never lost hope. And that's what pulled us through. At last, we got a reply from an Epic Games manager, saying they didn't see our game as an EGS exclusive, but would be glad to have it available in the storefront. Not the ideal outcome, perhaps, but still quite an achievement for our first submission!

The easiest way to earn your place on the EGS marketplace is to have someone vouch for you–and there are several ways to be noticed, as I mentioned above. Do not, however, spam mailboxes or send pitches to several people at once: this strategy will win you nothing but resentment. Your best chance is if someone else introduces you to an Epic Games representative directly: this will provide context for your company and title. And since the EGS catalogue is a hand-picked selection of games, content is key.

So, What Happens Next?

Gravewood High will be released simultaneously on Steam and the Epic Games Store in 2021. Our project got the green light from Epic Games back in April 2020, and since then we've garnered an impressive amount of wishlists on EGS and released a demo on the platform. The fans have shown a colossal response towards Gravewood High!

In the months since the initial announcement, we've become well-acquainted with the EGS interface for developers and have come to understand how to interact with the company moving forward.

Here's what I can share from my peek behind the scenes: EGS is a promising distribution platform for game developers and publishers alike. While it is still missing some features, the design and promotion tools are exceptional. And, its content localization tools (from game descriptions to news, blogs, and more) are second to none.

And that's to say nothing about the marketing hype EGS generates through its own social media channels and storefront visuals. We've already come to greatly appreciate all the assistance provided by the EGS team, and the power of EGS exposure will remain relevant well into Gravewood High's release. While we're on the topic, here's a screenshot of EGS free games page after the game demo was uploaded.

Even though we cannot describe the inner workings of the EGS backend in detail, we can say that we found working with EGS to be a highly positive experience. After navigating the long and winding road to publication on EGS, we can now more confidently plan our next project for the platform.