Preparing for Steam Greenlight with a Concept Page

In preparation for our Steam Greenlight campaign, my team and I decided to use a Concept page as a trial run. In this post I share the data acquired and lessons learned from the brief concepts campaign.
Chad Ata
Blogger
February 26, 2015

In preparation for our Steam Greenlight campaign, my team and I decided to use a Concept page as a trial run. In this post I share the data acquired and lessons learned from the brief concepts campaign.

Since our main goal was to use the concept page as a practice run, we set the page up as if it was our Greenlight page. All of the page content was finalized and thoroughly reviewed. This included the trailer, screenshots, and description text. We launched our Concepts page on December 19th, 2014.

Once launched, traffic started trickling in very slowly - a small fraction of what a typical Greenlight page would get. On average, we received approximately 5 visitors per day for the first few days. A handful of voters left comments and feedback. As more positive votes were cast, we saw our concept page star rating mysteriously change from 0 to 3, and later, to 4 stars. I say mysteriously, because we could not determine the cause of the change - my guess is that it’s a combination of vote-to-visit and yes-to-no ratios amongst other secret formulae. As the star rating improved, the page’s icon climbed the popular listing on the front Concepts page. This resulted in a bit more traffic per day, but never exceeded 26 unique visitors per day. The page icon lingered on the front page for several days, but eventually dropped off to the second page and beyond. Along with that, the daily visitors decreased towards zero visits a day. All in all, unique visitors exceeded 100 visitors on the 10th day. Disclaimer - we believe the numbers may be exaggerated by approximately 25 visitors as those were friends, family, and marketing based visits which we drove to the page. 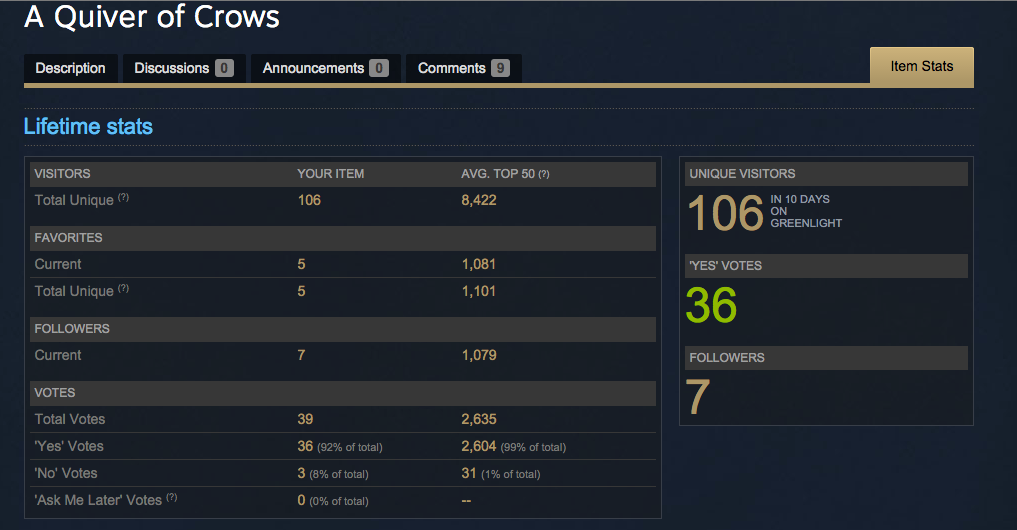 Despite the small sample size, we couldn’t help but feel good about such a high yes to no ratio. However, as we learned a few weeks later, Steam Concept traffic does not accurately represent Steam Greenlight traffic. Although the sample size is small and statistically insignificant, the difference between the approval (yes/no) ratios of the concept and greenlight page could not be ignored. The concept page garnered a 92% yes/no ratio, while the greenlight page resulted in a 51% approval ratio. It is also interesting to note that the greenlight page had a higher voter-to-visitor ratio, with only 39% of concept visitors voting as opposed to 73% of greenlight visitors who cast votes. In retrospect, this makes some sense - the Concepts page is hidden under a tab on the Greenlight page. Concepts visitors do not get a convenient voting queue, and the game listings are full of joke posts such as Black Screen Simulator. By the time a visitor makes it to your concept page, they have been through much more trouble than the average Greenlight voter. Perhaps that trouble is enough to filter out entire types of voters, leaving the most interested who arrive at a concepts page.

The main lesson I learned with this campaign is that the concept audience probably does not represent the greenlight audience. Despite that though, I still believe that using Steam concepts as a trial run is worthwhile. At the very least, you might be able to catch some typos before launching your Greenlight campaign.

Founded in 2010 by two guys and a gal, our goal is to make the world a happier place, one app at a time. We are currently working on our next game, a twin-stick shmup with a feathery twist for PC/Mac/Linux called A Quiver of Crows (which was greenlit in January 2015).