PAX Rising marks our most successful show to date, breaking our previous best show’s record in the first two days alone. In this article, we’ll explore the data, our experience and my key-takeaway for this show: gratitude.
Ross Przybylski
Blogger
March 11, 2020 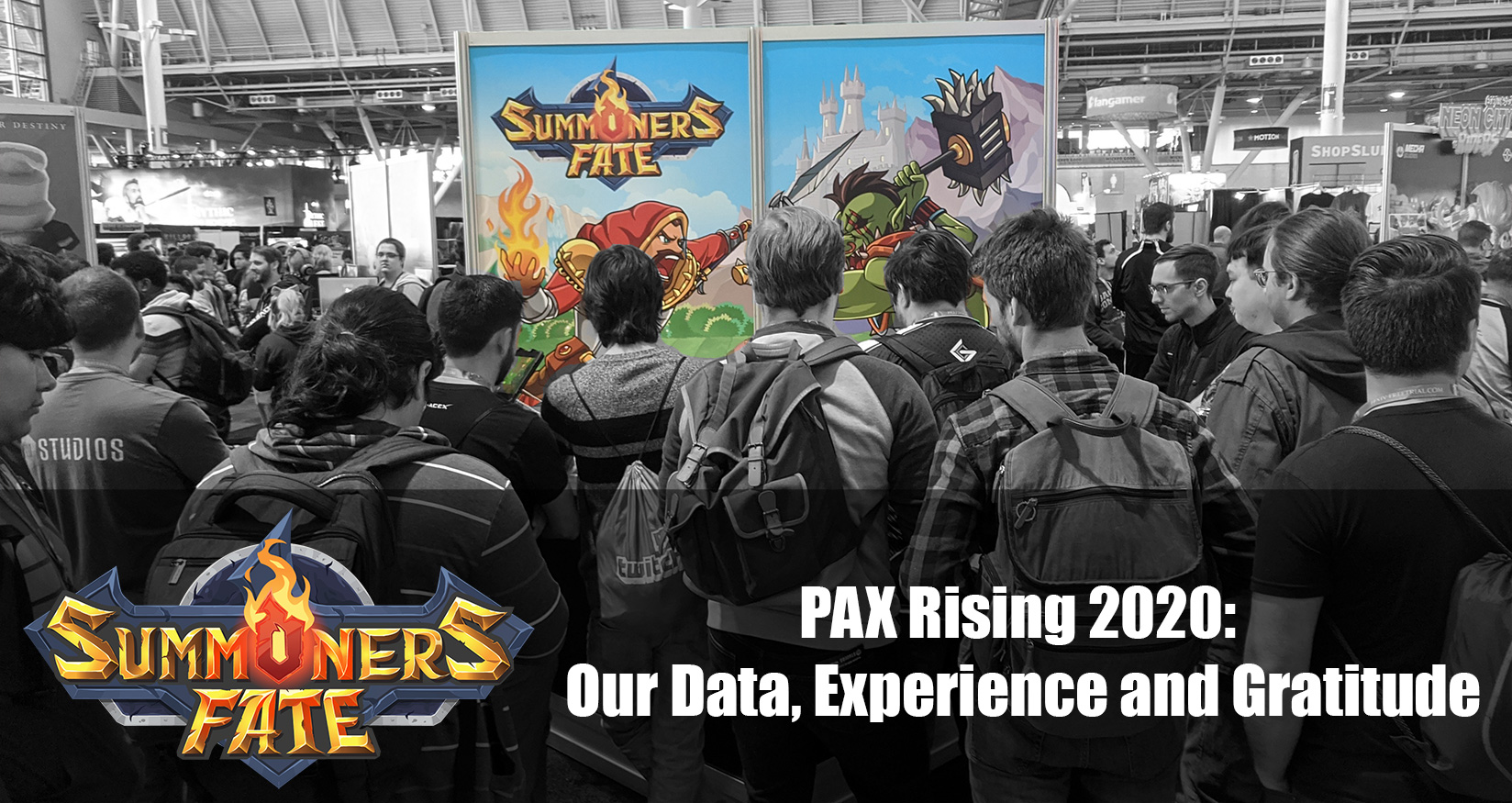 PAX East 2020 marks my indie team’s sixth major showcase of Summoners Fate, and each time, we do a write up to help ourselves and others learn how we can improve our marketing skills (See here for past write-ups). This event was our most successful show to date, breaking our previous best show’s record (the SLC Game Con) in the first two days alone. In this article, we’ll explore the data, our experience and my key-takeaway for this show: gratitude.

For our previous two PAX shows (West 2018, East 2019), we showcased as part of the Indie MEGABooth and opted for the 2-day MiniBooth for its lower cost, ease-of-setup, and IMB network event which continues to provide benefits long after the show. We have also done full booth setups in the past (Dreamhacks, SLC Game Con) though these come with added costs and responsibility to populate the 10x10 foot space. This year, we had the honor of being showcased with PAX Rising - and I would describe the experience as the “optimal middle ground” for small teams with prior showcase experience whose goal is to build further brand awareness and get feedback from players.

To get into PAX Rising, you apply via their website about 4 months prior to your target show date. Their staff hand-picks fourteen teams that they believe have the potential to “rise above their modest beginnings, by growing as a company, establishing a fan base or pushing the industry” and provides them a kiosk-style booth setup in a highly foot-trafficked area of the expo at a prorated cost. This setup includes power and creation and installation of artwork that you can see in my setup here: 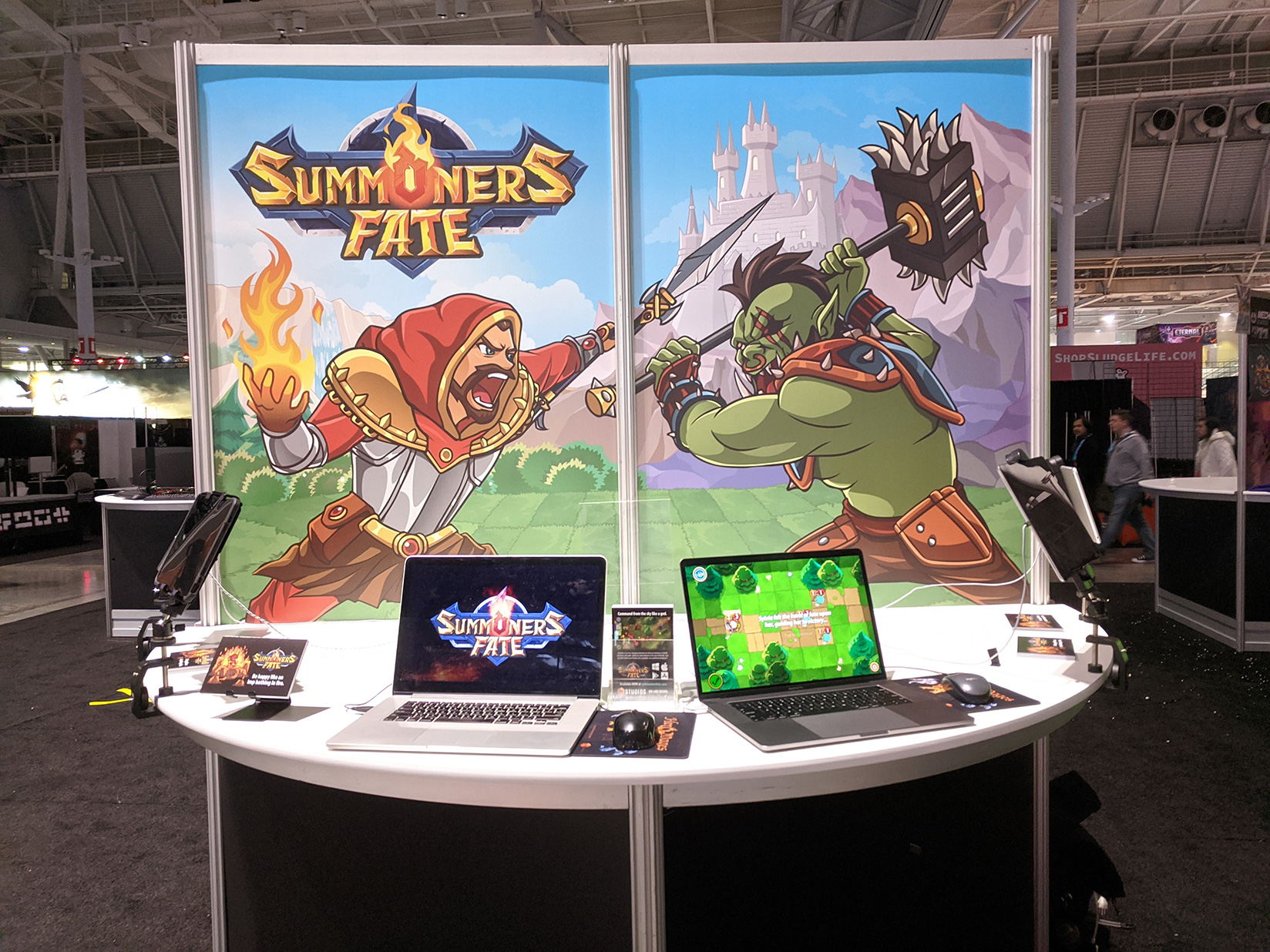 The PAX Rising booth is a half-circle pod that includes power and artwork. You can bring your own devices or pay extra to have PAX provide them.

Here’s a breakdown on what it costs for a team of two to showcase with Rising at PAX East for four days:

This budget does not include cost of demo devices (we used our personal devices for showcase) as well as other accessories (such as our tablet mounts and cabling) which I purchased and have continued to use from past shows. 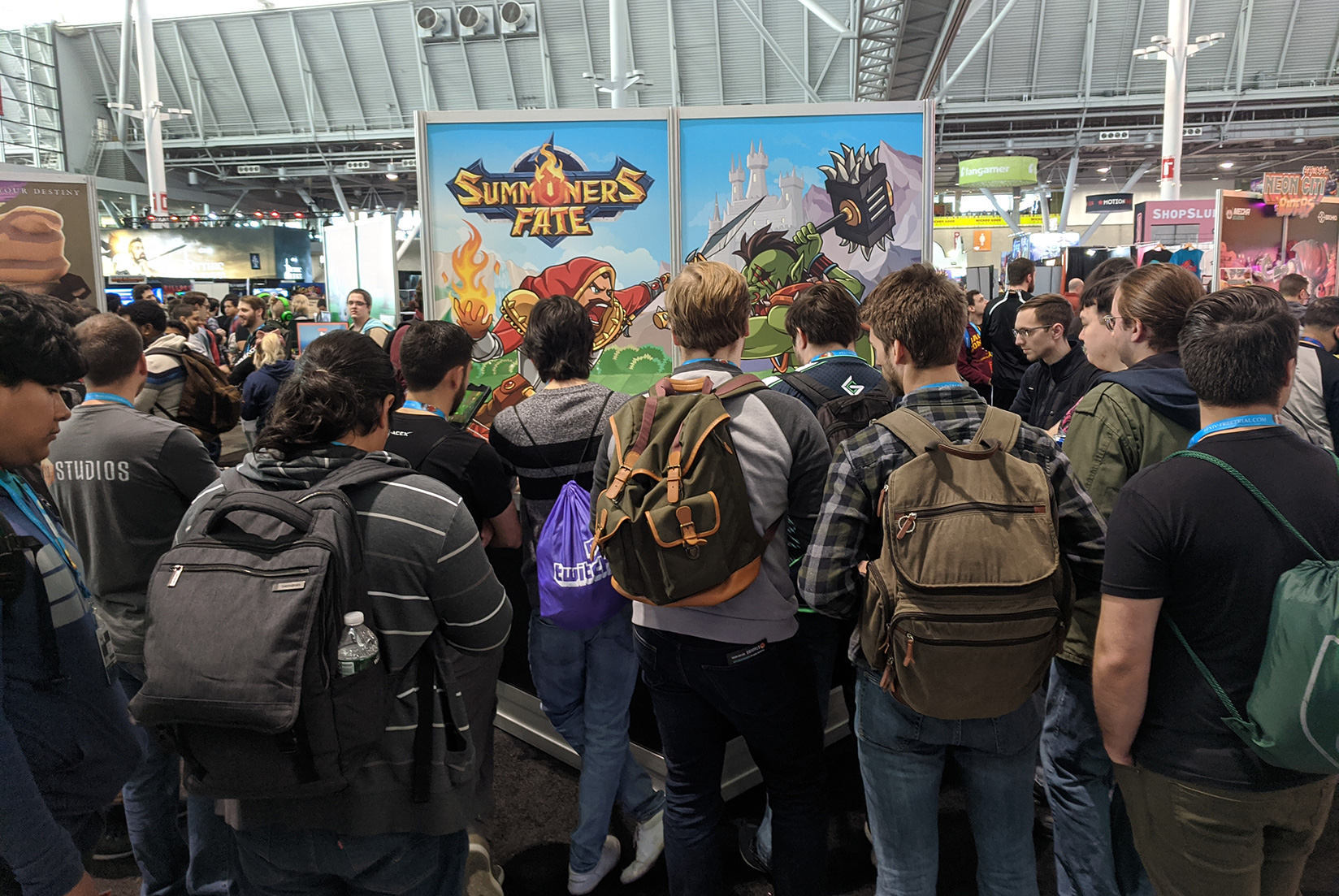 Here’s what our booth looked like during expo hours.

I’ve been using telemetry to track data on our demos since our first showcase, and this has proved incredibly valuable in helping understand how players experience the game in conjunction with observation and asking them for feedback afterwards. Here’s what our session data looks like: 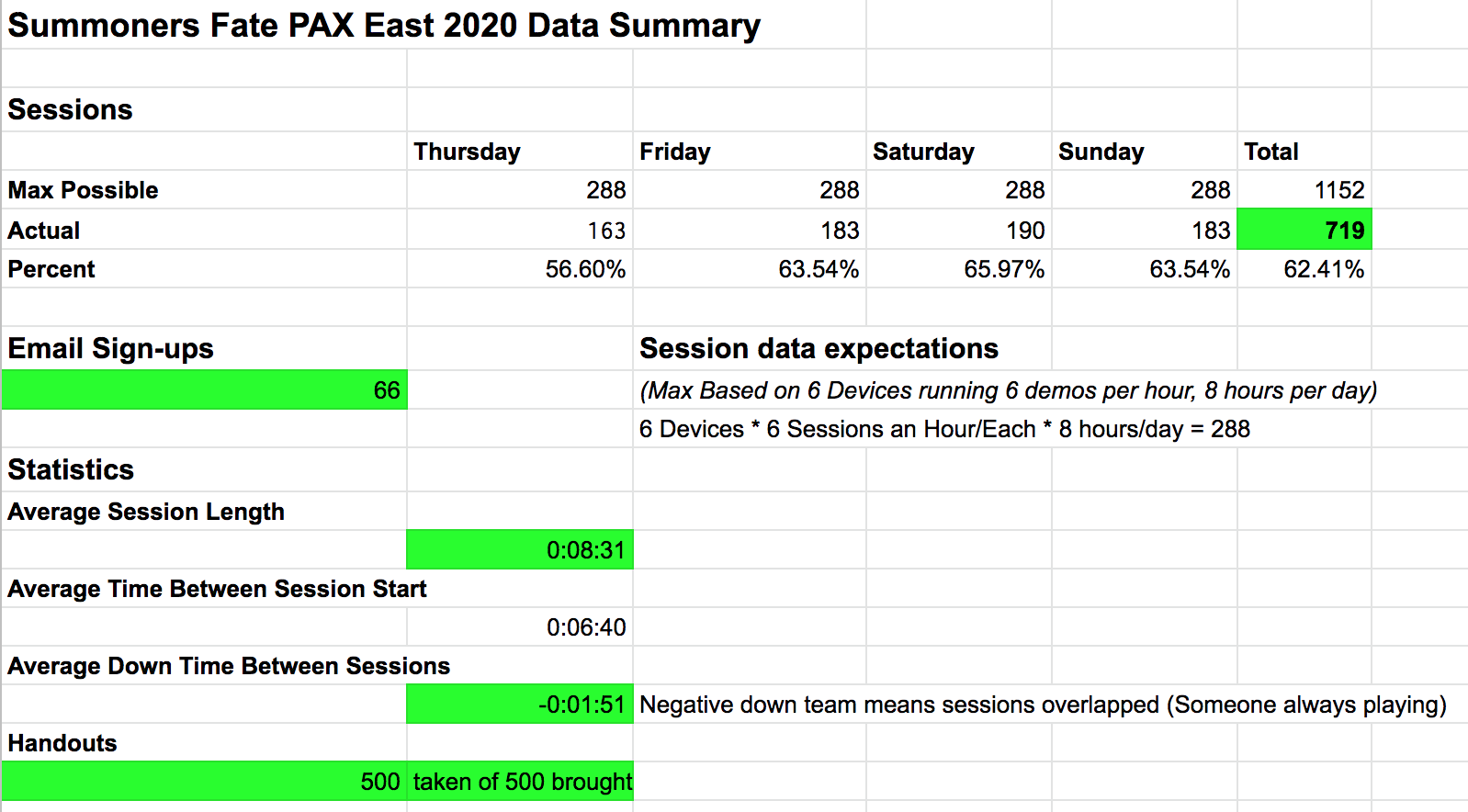 To count as a session, the time-stamp of the session start had to be during expo hours and had to be at least 60 seconds long (to rule out any setup tests we did on the devices). We had 719 total sessions with PAX Rising 2020, and our best record prior to this was the SLC Game Con (which was a three day show, 12 hour days) at 293 total sessions, and our previous PAX East 2019 was 149 total sessions. We were completely blown away by this number - and you can tell by the fact we gave away all of our hand-outs that we were not expecting this.

Tip: If you find that you are going to run out of hand-outs, keep 1 of them, put it in a display case and ask players to take a photo. This actually works out well and as a bonus the photo won’t get lost.

Here’s our take on factors contributing to our success:

With our new open world, exploration is seamless and players loved their herds of squirrels and other animals following them.

Here’s the new level funnel data for our demo. It’s interesting to note that the demo actually has twice as many levels as prior (14 vs 7), but takes less time to play due to the overworld system and elimination of prior friction: 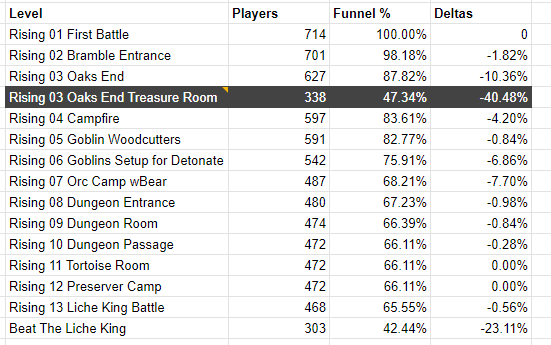 Oaks End Treasure Room is an optional (non-linear) level reached only via exploration and puzzle solving.

And win/loss statistics for the levels containing battles:

Another change we made for this demo was to make it so that players cannot retry the last battle vs. the Liche King. Instead, the demo ends and goes right into registration. Anecdotally, I think this helped us - at least in the case of one particular player who told us the next day that he stayed up thinking about how to beat the Liche King, came back to the booth, beat him then bought the game right at the booth.

Standing on your feet, shouting about squirrels for four days is an intense experience that takes a heavy toll, both physically and mentally - but I was fortunate to have such an incredible support network. Let’s start with our PAX Exhibitor assistance, Emma, who gave each of the indie teams there her personal cell number the first day and a “call-anytime” offer of support. There’s the enforcers - who I continue to maintain are among the best support staff I’ve yet seen at a show of this size and caliber. I thought it was a big deal that Kevin Brady, who heads up PAX Rising organization and selected us for rising personally came by to check on us during the show. Likewise with Krista who coordinated the artboard and Devin who did the printing and who both helped arrange for us to take the art home after the show.

When the days got particularly intense, I was grateful to have the AFK lounge, sponsored by Take This, an organization dedicated to caring for mental health in the game industry. They provide a quiet room to relax and recover from the intensity and stimuli of the expo hall as well as volunteers and clinical aides to talk with.

My fellow indies - who came to realize as we did that Boston traffic can be unpredictable and costly to morning setup time - were there and willing to exchange numbers so we could cover each other’s booth should the need arise. Shout outs to our friends at DNA Studios: Tower of Babel, Knight Shift Games: Elsie, Not Dead Design: Kana Quest, and Tripe-I Games: Hindsight 20/20. It was great having a chance to connect at dinner after the show on Sunday. 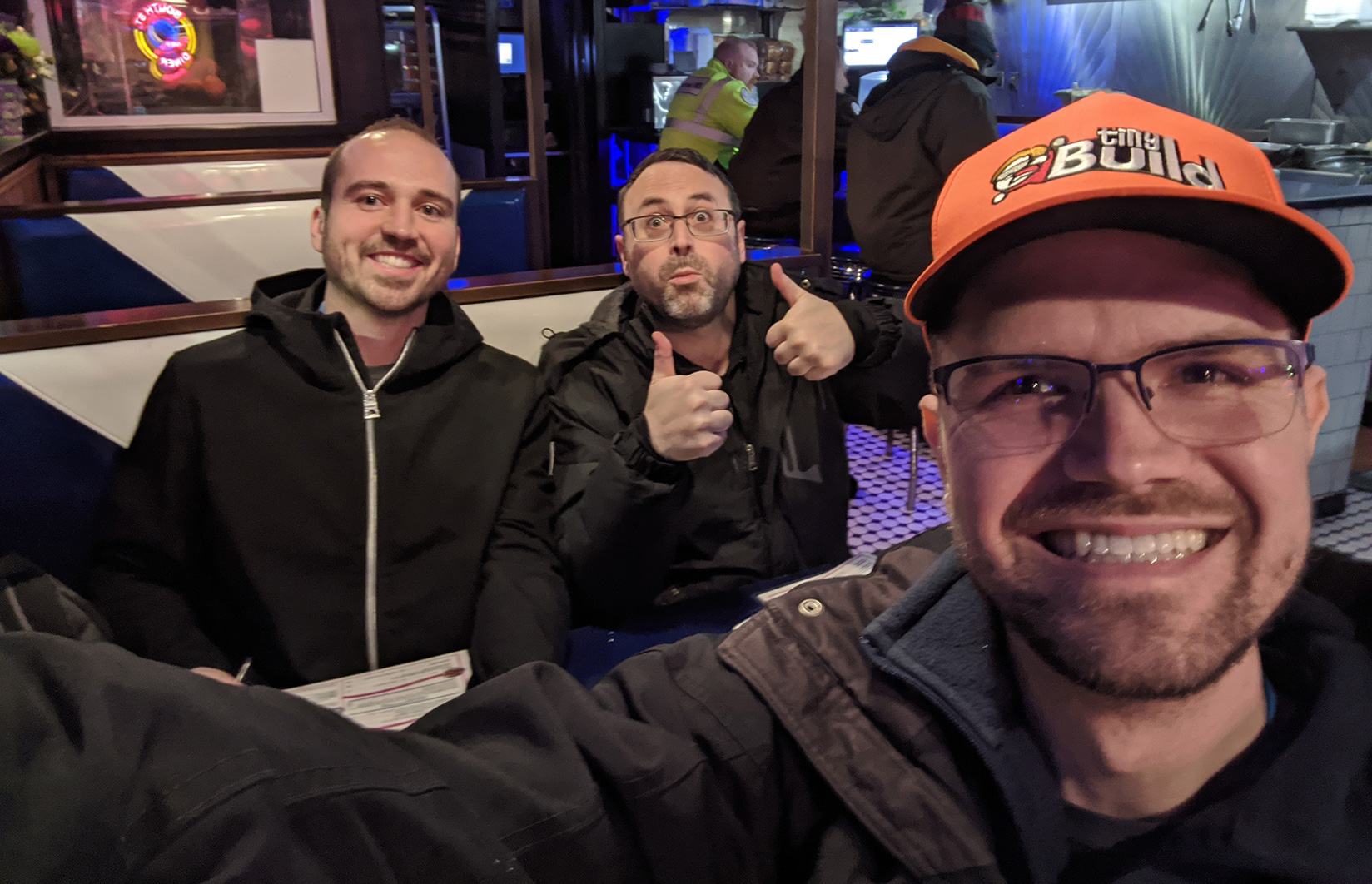 Peter Jones, Joe Lieberman, and me in the Tiny Build hat that was wrestled off a giant bear.

Our friends and fans - both new and visiting us again - made the show such a memorable and meaningful experience. Loved seeing Justin, Mike and others from the Creator Crew - a community of streamers we’ve been friends with for the past year, Benjamin Glover from Stellar Jockeys, Shane from Evil Villain Games, and of course, my longtime friend and supporter Joe Lieberman from Antlion Audio who I finally got to meet in person. Even those who couldn’t be at the show expressed their support and checked up on me throughout the week - thanks to our awesome player community, and my friends Chris and Ashley who’ve been helping us out.

There’s my friend and teammate Peter, who once again took personal time off work to go on this crazy adventure with me and to teach me what a good person looks and acts like in the way he treats everyone he meets with kindness.

Finally, I thought of my family a lot - my wife, son, daughter and mom put up with a lot of craziness from me in the months leading up to the show. They were always there cheering me on. With a support network like that, it almost feels inappropriate to call myself “indie” because I was never really alone. And that’s why my big take-away from this year’s event is gratitude: a recognition of all that is right, meaningful and important about the relationships I have in my life, how truly wonderful and amazing this is, and that I appreciate everyone so much for being there for me. So, thank you, everyone! And thank you for reading this article. May you take a moment and give thanks to those that have helped you on your journey.