Nintendo got a lot right with the Wii

Understanding why the Wii was so popular and its sequel failed to build on its success whilst speculating on the design of the Nintendo's NX what new experience this may provide and how they may be poised to allow subscription to their back catalogue.
Nick Harris
Blogger
March 20, 2015

A broader demographic took to the accessible gestural controls and already familiar rules of Wii Sports and welcomed new experiences like Wii Fit into their daily lives. The sequel should have built on its predecessor’s success and not have introduced a divisive Flablet that siblings would fight for control over or feel as if they were second class citizens.

Giving everyone the same PS Vita sized controller would seem the obvious solution and it may well be part of Nintendo’s plans to make a portable console to replace their 3DS XL which could be used as the controller of a home console for the continuous appreciation of progress synchronized Monster Hunter Ultimate V.

However, I hope that this won’t be the case.

I want to see Nintendo perfect what was so promising about the Wii with a pair of precise Nunchucks that are enhanced by inclusive VR and a gradual learning curve of AAA titles that encourage the broadest audience to go from swinging their club in a round of golf through moving around the court in a match of tennis to tackling the ball in a game of football before mastering the magic of the Mushroom Kingdom in Mario and progressively developing the articulacy of expression with a single user interface until they can graduate to the sophistication of Zelda without need for intrusive in-game tutorials: 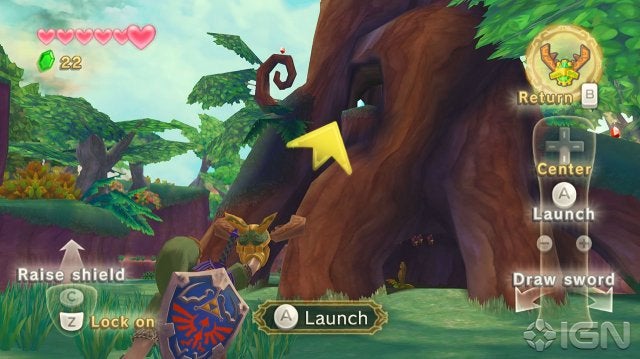 It might take a while to educate everyone on how to grasp the latest Metroid or master the six-degrees of freedom of asteroid dodging arena combat in a next generation Starfox, but it can’t be helping matters to say…

"Here is the Wiimote, no wait, we have redesigned it… it is the Wiimote Remote Plus… no wait… the Wii MotionPlus… oh, yes and you’ll need a Nunchuk to go with it if you want to play anything serious… then a Classic Controller… Pro… yeah, we redesigned it whilst you were blinking… Not to mention the Club, Racket, Zapper, force-feedback-free Wheel, Fight Pad and Vitality sensor (oh wait, we killed that one). Of course, all of this has been rendered obsolete by the flabulous Wii U controller, but although only one of you can use it we’ve thought of a solution to that called Asymmetric gaming which forces everyone else make do with an old Wiimote held sideways! It's the future of gaming!!!"

We need one controller. We need one online profile for all our devices. We need Simplicity.

You would start off playing Wii Golf with a single wireless Nunchuk which would be more precise and responsive due to the use of an electromagnetic field like STEM and wouldn't cause frustrations on the green as it would come with a pair of those inexpensive Cinema 3D glasses that incorporated infra-red LEDs for Portal VR Head Tracking which would be further enhanced by their support for your Flicker-Free 1080p LED Cinema 3D TV which would give you a sense of the gradient as you stoop, and glance from your ball to the hole and back by tilting the thumbstick from side to side. I feel that this Portal VR is Nintendo seeking to provide an immersive experience that deliberately skirts around the awkward suspicion created in the minds of spectators and potential embarrassment for those who are unaware of their surroundings to provide just enough virtuality whilst not removing a parent's ability to monitor their child's media consumption that would come from a totally immersive headset and most likely cause the same social problem as the Walkman. You would need to pick up the left handed Nunchuk to use its thumb stick to move around a Tennis court, each of these sticks could be clicked and would come with impulse triggers and a split bumper button – the inner part of which would operate a miscellany of features:

The inner portion of the right handed Nunchuk split bumper would be marked with a red + and the left would be marked with a blue – symbol. Holding both down simultaneously for several seconds would SYNC the Nunchuks with the console so that it knew they were held by the same player, this should only have to be done once as thereafter they would be kept as matched pairs on the sheathed spikes of the separate charging station that could support another three pairs for four dual-wielding players or a maximum of eight single-handers.

The red + would be held for ON and thereafter to go HOME or tapped to START / PAUSE.

The blue – would be tapped for SELECT and held for ten seconds to turn the console OFF.

The face buttons (A) (B) (X) (Y) would be made concave and relocated to pits on the inside of each grip under the fingertips of the ring and middle finger of either hand so that (A) (B) were operated by the right hand and (X) (Y) by the left.

If possible both analog sticks would be capable of being converted into stiff digital joysticks by screwing them deeper into their sockets with a clockwise twist. As a result this enhanced Nunchuku would be capable of supporting the intuitively gesturally controlled Wii Sports titles, the AAA titles that are better with a Classic Controller Pro like Bayonetta 2 although she does respond to touch as the video below shows, then any multiplatform titles that may get ported across from the other consoles (as these Nunchuku have the same articulacy of expression as the XBOX ONE controller and the glasses provide a form of Head Tracking without all the concerns of snooping and targeted ads that surrounded the ill-fated Kinect), as well as all the D-Pad driven retrogames from Nintendo's extensive back catalogue.

Nintendo could even have plans to provide unlimited access via a new subscription service:

Gold would include all the benefits of Silver. Platinum would include the benefits of Gold. Nintendo need to act fast before hackers figure out how to make halfway decent emulators on their existing iDevices and undermine piracy of their old warez by making it far easier to satisfy your nostalgic urges with an enormous cornucopia of content that is cheaper to rent and doesn't require Nintendo hardware you won't be buying as you already own an iDevice.