During calendar 2014, Nintendo generated ¥27.1 billion from digital sales. At current exchange rates, that's over US$225 million, but the more important point is that this represents nearly 11% of the company's software revenue.
Matt Matthews
Blogger
January 30, 2015

I think Nintendo is finally all-in on digital sales. It took some work, and I still don't understand why they let the business languish on the Wii, but they look like they've finally turned the corner.

Specifically, they're edging up toward US$250 million in annual revenue from digital sales, and they've pushed digital sales to nearly 11% of their total software revenue. Given the company's weaker position this generation, that has to be welcome news for the company and its investors. 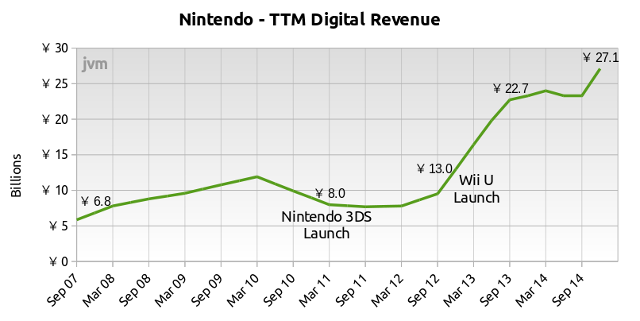 To smooth out seasonal variations, I've chosen to use TTM (trailing 12-month) figures. So each point on the graph represents the revenue from the 12-month period ending on that date. The ¥27.1 billion figure, for example, is for the 12 months ending 31 December 2014 (i.e. calendar 2014).

To give you an idea of some turning points in the history, I've also added two platform launches. I think you can see that launching the 3DS did eventually stanch the declining digital revenue after the Wii fell apart. Then around the launch of the Wii U there was a serious increase in the rate of digital sales.

But it's that jump this past quarter that's really remarkable. Here's the difference: the digital revenue between 1 April and 30 September 2014 was ¥10.7 billion. That's for a full six months, and in the following 3 months (between 1 October and 31 December), the company generated almost the sme amount: ¥10.4 billion.

As for how this measures up to Nintendo's larger software market, that ¥27.1 billion in digital revenue represents 10.8% of the company's total software revenue. Given where the company started with the Wii, they've come a tremendous distance. Here's that picture: 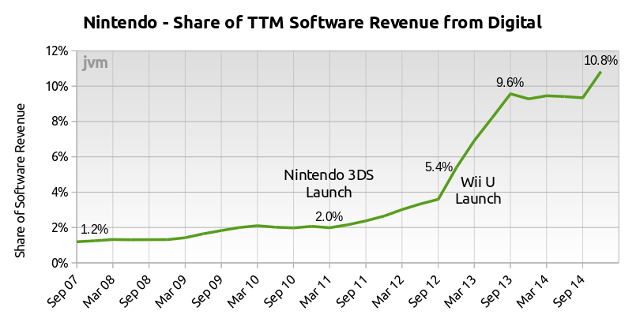 Is this sustainable? Nintendo really needs a good answer to that question, and I'm not sure what they're going to do. Their hardware platforms are flagging a bit, and they will need an engaged set of users to keep up the software sales. It's possible that the New Nintendo 3DS models can help drive some interest, but we won't know those results for several more months.

[Matt Matthews has another Nintendo analysis, about the decline in its 3DS hardware business, live now on Gamasutra blogs.]