At Google I/O in May 2019, Google shared that developers can increase their average rating an average of 0.7 points by replying to reviews. We decided to dig deeper and understand what app store reviews impact and how to use them to boost your game growth
Kate AppFollow
Blogger
November 08, 2019

At Google I/O in May 2019, Google shared that developers can increase their average rating an average of 0.7 points by replying to reviews. We decided to dig deeper and understand what app store reviews impact and how to use them to boost your average rating, as well as acquire and retain users. We will be talking about mobile games, but all this can be applied to mobile apps as well.

The last one — feedback in app stores — is often underrated. That's because it's seen exclusively as an image issue. Developers don't think these reviews can be useful to the game.

When it comes to service apps (e-commerce, food delivery, and others), users often complain in app stores about the quality of clothes or slow delivery guys. The way the app works won't change that. It's almost impossible to change their minds in these cases. You can only calm an angry user down by quickly responding to them.

Reviews work differently for mobile games. The game is the service users are buying. AppFollow's data shows that app store reviews generate from 30% to 100% of feedback for mobile games. This number depends on the ways developers collect user feedback. For example, a mobile game can have or not have an option to contact the support. 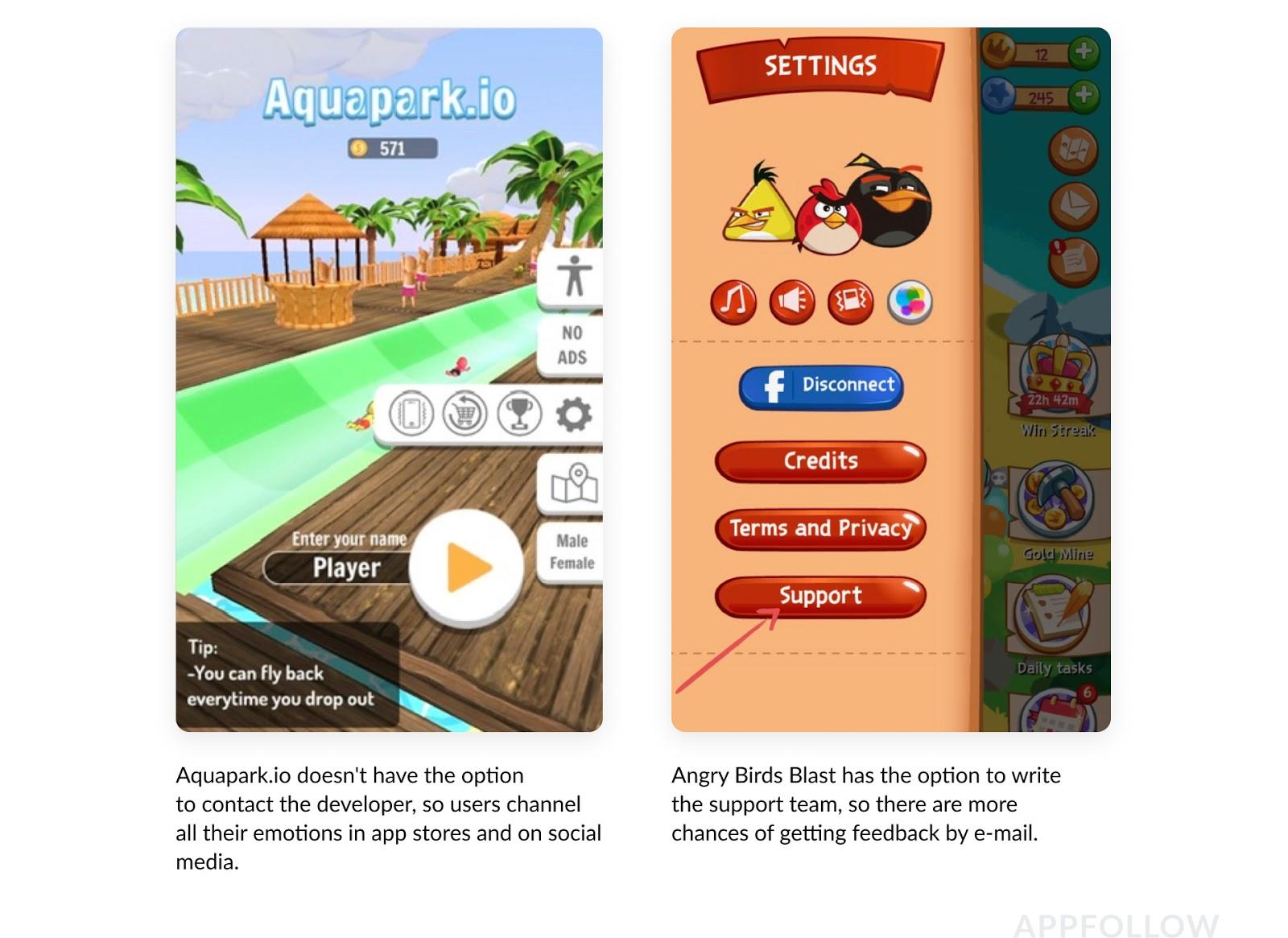 What impacts your average rating and reviews?

All app store feedback consists of two things: ratings without reviews and reviews themselves. Our data shows that only 10-30% of gamers write reviews. The AppFollow team has identified 3 types of ratings to help gaming companies influence their opinions a little more precisely:

We recommend looking at different rating types based on what you're trying to achieve:

Customer Support — this accounts for the difference between Rating by Reviews and Average Rating.

Game Development — this impacts your rating after a release.

When you respond to app store reviews, it helps to reduce the number of messages the support team gets because everyone can see your replies in the app stores.

You can talk to users from app stores in two different ways:

It seems like users write for hundreds of different reasons. When you don't have enough hands on deck to respond to them right away, it's hard to decide which reviews to reply to first. Developers try to reply to recent and 1-star reviews, but these aren't the reviews you should spend your time on. 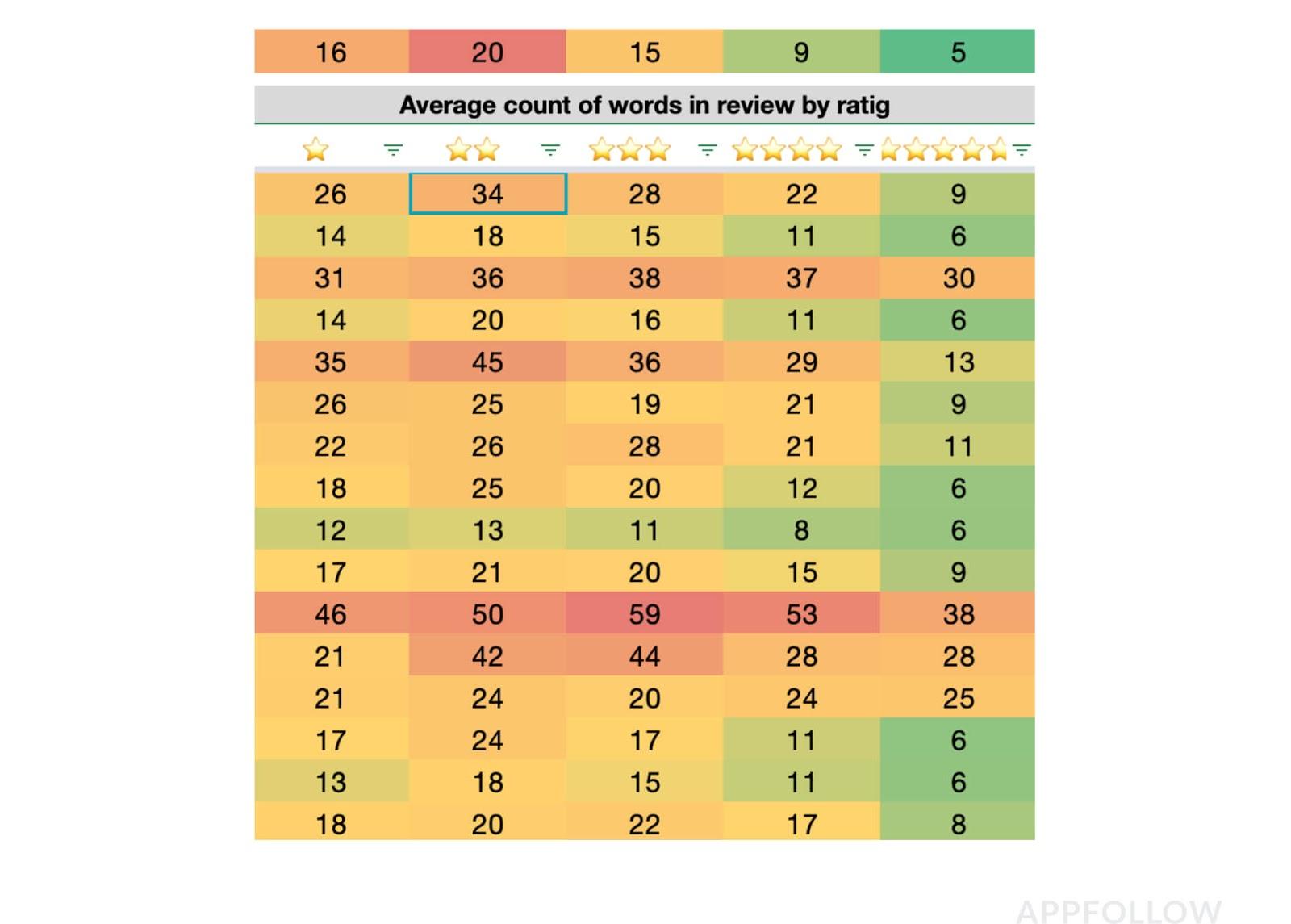 The most complicated part of working with reviews in app stores is not having a user ID. We often can't solve a user's problem if we can't identify them. The only currently available way to solve this is to direct the user to send an e-mail and ask for their details there. Not everyone will send an e-mail and the issue of quick reaction time pops up. The sooner you respond to app reviews, the more chances you have of engaging the user in a dialogue.

If the interface doesn't have a "Contact support" button, don't forget to include forum links or e-mail addresses in your reply. Source: appfollow.io

Players only see your average rating for their country. A lot of newbies forget about this because the console and app store display data only for the default country. That's why it's important to track countries individually when working to boost your average rating.

If your support team divides up countries, change your settings to distribute reviews by language. That way, they'll automatically go to the right language queue. If you don't have a lot of support agents, set up auto-translate for reviews to get a clear idea of players' issues right away.

Support agents alone can't influence your average rating because only a third of users leave a review with their rating. As such, the rating Customer Support can really impact is Rating by Reviews. This rating will alert you to any issues players have: 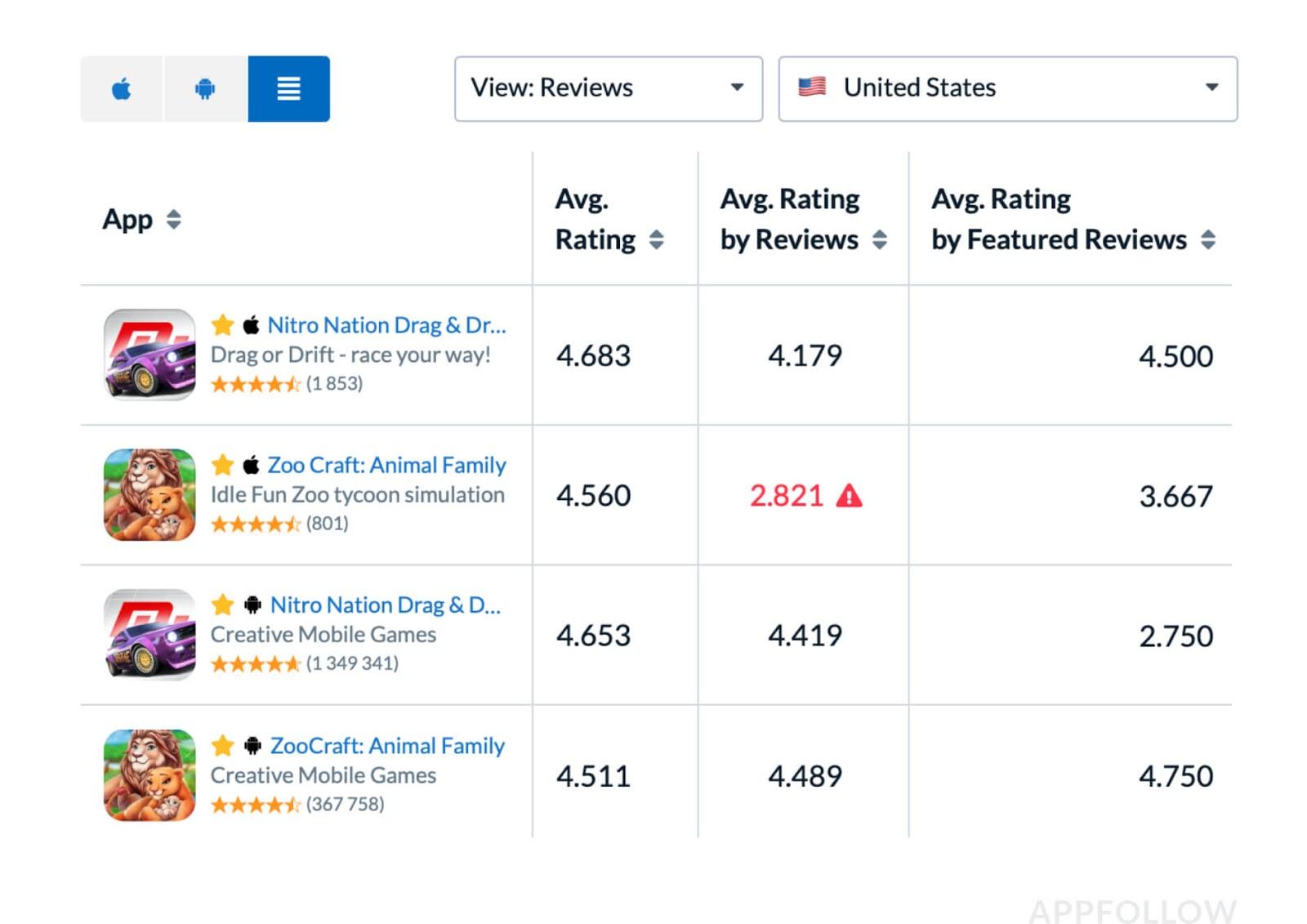 If the Average Rating and Rating by Reviews differ significantly, it means there's something wrong with the support team. Source: appfollow.io

Two of the quickest ways to impact the average rating are:

How to respond to app store reviews to boost user loyalty and ratings.

The average rating and featured review rating impact download conversion rate as much as the icon, title, and eye-pleasing screenshots.

The first thing visitors see in search results or collections is the app's rating, which is made up of star ratings and reviews. We've identified that the rating of apps and games in the top charts and featured section is 4.5 stars. Apps with a sub-4-star rating lose up to half of their potential downloads. Users simply don't click on them in search results when they see the low rating. 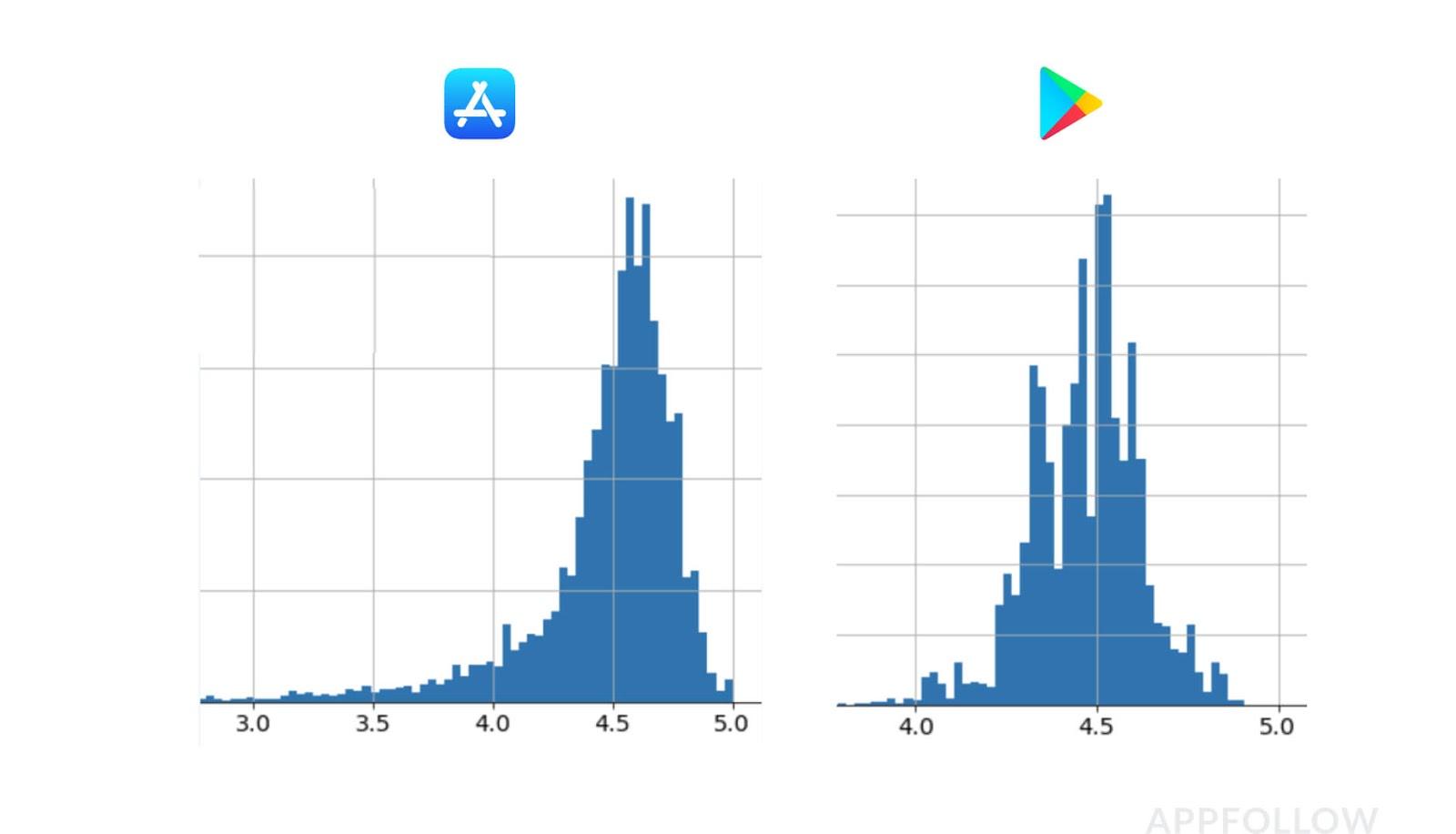 If the rating doesn't scare off potential users, they'll visit the game page. We all look to see what others think about a product before purchasing it. Gamers are no exception, which is why they first look at featured and helpful reviews, i.e. the reviews displayed on the game page in the app store. Negative reviews, especially ones without a reply, will hardly propel users to download the app.

The user laments that the game has become worse and that developers aren't doing anything about it. Everyone who visits the game page sees this review. Source: appfollow.io

To make your ASO or ad campaign work better, check out featured and helpful reviews before launching them. If there are any reviews without replies, respond to them. It doesn't matter if they're old or not, this is where you reply to all users who visit your page.

Users often write about game mechanics, gameplay, new features, or characters. This feedback helps improve the game overall. This generally comes after your app gets featured, you release a new version, or due to a run-of-the-mill bug.

The number of negative reviews shot up after the July 4th release. By digging into these reviews and fixing any bugs, you can bring negative sentiment to a minimum. Source: appfollow.io

If an app gets featured, negative reviews can soar unexpectedly, especially if the developers didn't prepare for it. For example, getting the App of the Day card brought the game PES 2019 PRO a ton of 1-star reviews in Mexico. This could be because servers weren't ready, the game didn't meet new users' expectations, or other reasons.

How to get featured on the App Store without your average rating dropping.

In addition to looking at app rating, you can analyze the substance of reviews to identify the reason behind the negative reviews. Analyzing topics, popular words, and review moods helps to quickly find: 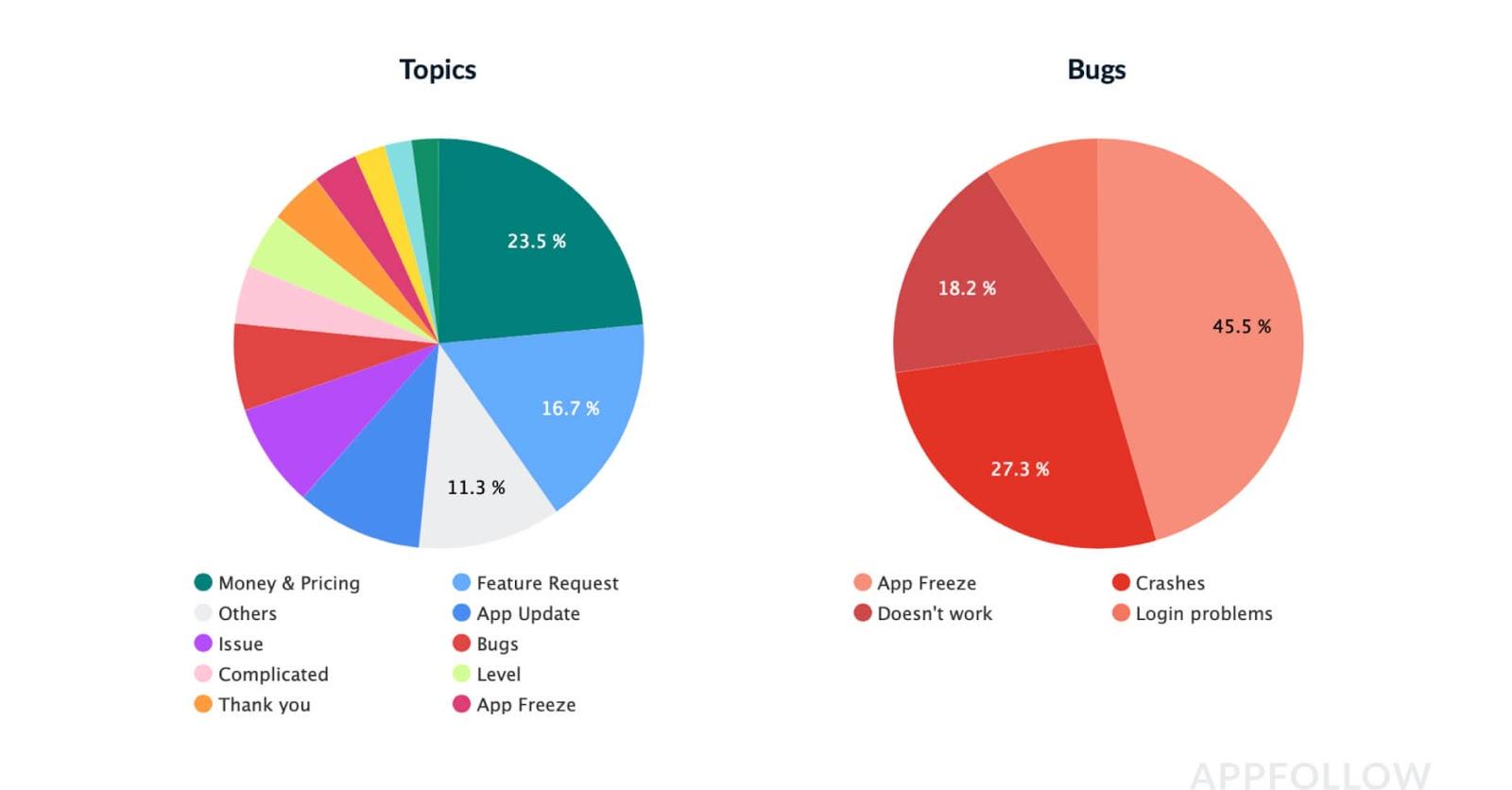 Nearly 25% of World of Tanks reviews in Google Play are about money and pricing. Only 5% of users write about updates. Source: appfollow.io

By working only with the "problem" reviews", you can build loyalty and retention among these users. The product team can get just the reviews they need in Slack or Jira.

It takes a team effort to improve your reviews and rating. We recommend that teams adopt a unified metric of an average rating higher than 4.5 stars. This is the rating that apps in top charts and featured apps have.

Our statistics show that players respond to 2%-30% of reviews and 15% of players change their minds after getting a response. Track changes in answered reviews and the game's overall score to evaluate your results.

AppFollow shows you how many points your average rating goes up (or down) per month after you reply to reviews:

You don't necessarily have to reply to all reviews for your rating to go up. The main thing is to respond to critical ones, like long and negative reviews, or ones with a decreased rating. Source: appfollow.io

Also keep track of changes to the app's overall score, i.e. the correlation of positive sentiment to negative sentiment in reviews.

Reaching the green zone means that the majority of users are happy with the product. Source: appfollow.io

Your pot of gold at the end of the rainbow for all your hard work is getting your app featured and having loyal users.
The original blog was posted on the AppFollow's blog.