My experience at PAX West with Indie MEGABOOTH and why it was totally worth it.

Like a dream, the encounters of Indie MEGABOOTH flow naturally together in a series of meaningful, interconnected events that provide much needed validation for the risk and sacrifices of indie devs.
Ross Przybylski
Blogger
September 06, 2018

My experience at PAX West with Indie MEGABOOTH and why it was totally worth it. 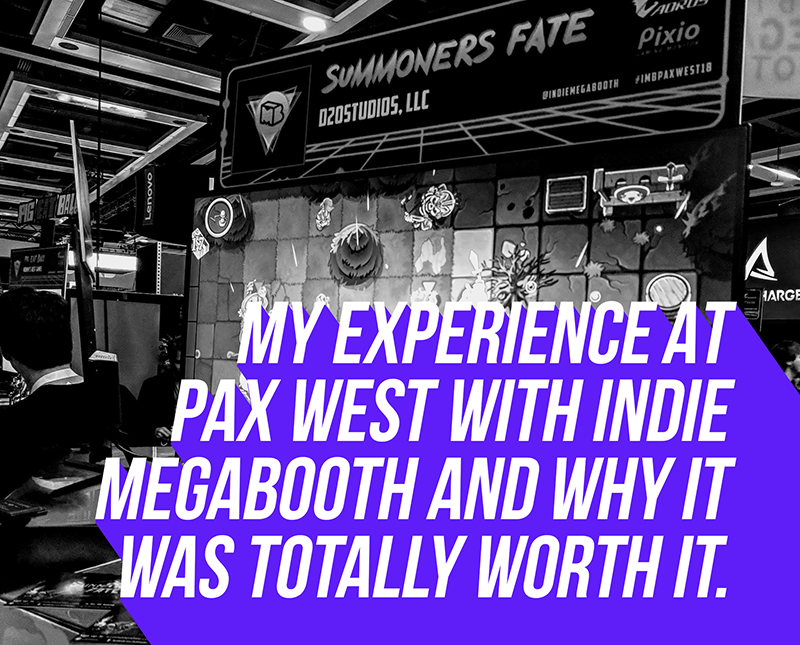 On my flight home from Seattle, I pondered over my time at PAX West where I had just finished showcasing my game, Summoners Fate, with Indie MEGABOOTH. The experience was so surreal it felt like a dream: chance encounters and passionate discussions that seemed to flow naturally together in a series of meaningful, interconnected events.

I was tired and uneasy the morning I left because I had been up late the night before fixing bugs I discovered in the demo. I was frantic on the plane as I worked against the clock of arrival and the battery life of my laptop. Then I arrived in Seattle and there was a driver waiting with my name on a sign. I didn’t have to worrying about where I was going, I flowed as if on a gentle current. Stress began to melt away.

This was thanks to my friend, Laura, who’d I met met several years back when we worked together at EA. She’d already anticipated the state I’d be in and had put an entire plan in motion to provide the support I would need to succeed at the show: a place to stay, time to polish the demo, introductions to her friends and rides throughout the area - including a stop for a signature Seattle hotdog. This is the delightful and heart-warming surprise of people I’ve met in the game industry: the lengths they go through to show their kindness and support. And this was just the first of many I would experience at PAX.

Making it to the MINIBOOTH

After spending the morning and early afternoon exploring the various PAX exhibits, I made my way to the Indie MEGABOOTH. Once there, I started talking with some of the other devs who were showing their games in the MINIBOOTH. I reached my hand out with excitement to Nicolás, another dev creating a game with CCG mechanics called Causa. “I’m so excited to meet another dev also working on a CCG!” I said. “I can’t wait to hear about your stories and how you’ve solved problems in your game design.” His face lit up with joy. It’s a wonderful feeling to meet someone like this. They’ve experienced and dealt with the same challenges so you can connect and understand each other in a way other people can’t. 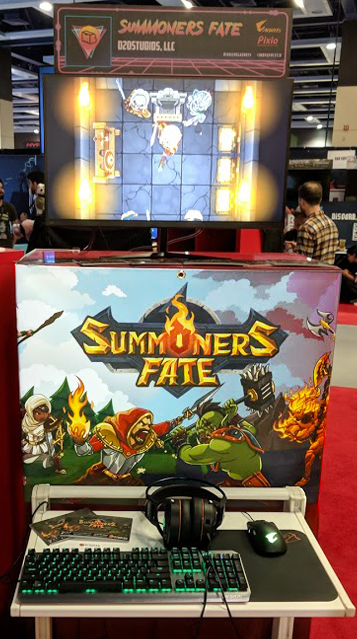 Our kiosk in the MINIBOOTH, ready to go!

Up and early the next morning, I was anxious to meet folks exploring the expo and have them play my game. I had quite a scare when my demo wouldn’t install, but the volunteers were quick to respond. The MEGABOOTH team and Pax enforcers are among the most amazing and courteous folks I’ve ever encountered. What could have been a very uncertain and trying experience was made easy with their constant support and reassurance. “Are you doing ok? Can I get you anything? Here's some cough drops, let me refill your water…” This is a level of service and care all organizations should aspire to.

The showfloor was a great place to discover what gravitates people toward games. I found out it was a combination of familiarity and weirdness. “Summoners Fate is a top down fantasy adventure meets deck builder.” “Ohhh, ok” (nodding inquisitively). “And you get to hurl squirrels at your enemies and then transform them into super squirrel mutants.” Laughing. “Ok now I gotta try this…”. Being with the Indie MEGABOOTH helped: people knew going in that everyone manning the booths were the actual game developers - and that’s what makes the experience so special. It wasn’t just a chance to show the game, but also my personality: that I’m sincere about my enthusiasm with the game and my commitment to players.

The Power of Connecting

Hanging out with fellow indies was good medicine. It was reassuring to hear similar stories about the sacrifices we're making. One of the dev teams, working on a game that rivals the art of Skyrim called Eastshade told me how they were living together with their mom and grandma. Others were taking breaks while dealing with family emergencies or trying to juggle a full-time job or contract work on the side to keep things up. I could relate: My wife had to return to working full time to give us extra runway on our project. I had to take on more responsibility taking care of our two children. We had to pay for an expensive surgery out of pocket because we didn’t have corporate insurance. We’ve missed out on vacations, we never travel to see family, and we’re constantly dealing with disasters that come up. Uncertainty creates enormous pressure and there are many times it feels all-consuming and soul crushing.

Despite our common challenges, none of us deterred away from the hopeful sentiment we all believed in: You can always make more money, you can't get back the time in your life. Your moment must be seized while it can. 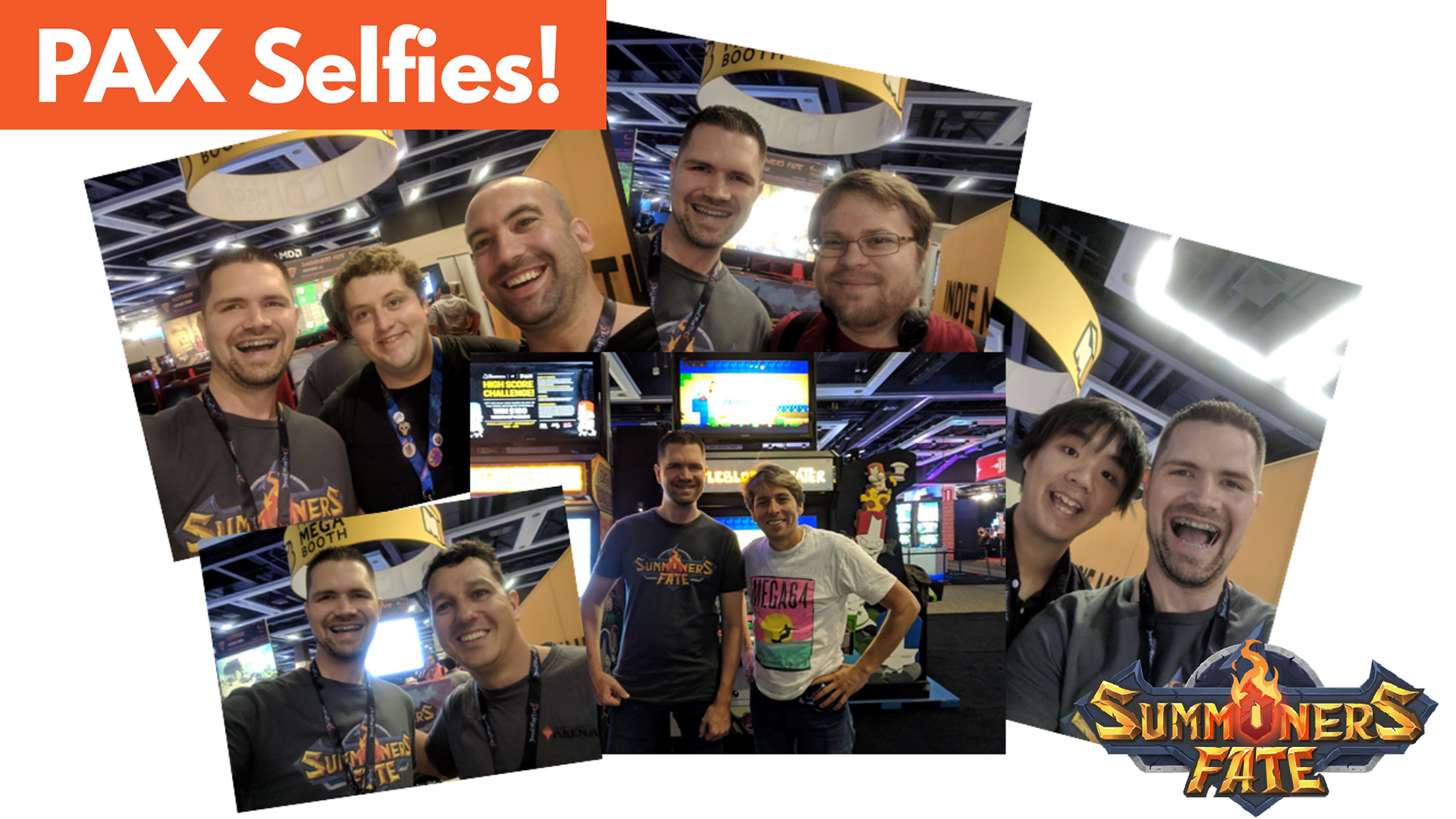 Meeting new people was the best!

I met so many amazing people, including some of our longtime fans and followers who made a special trip just to see me. Shout outs to Tom, Patrick, Kyle and Jeremy! I got to tell John Baez, founder of The Behemoth how Battle Block Theater’s level editor inspired my son to become a game developer. Chainsaw Games Studio, creators of my favorite Xbox party game, Knight Squad, were just across from the MINIBOOTH showing their new game, Aftercharge. An analyst from Magic the Gathering team told me he really enjoyed the onboarding in our demo. Wanderbot, a YouTuber I admire and really wanted to share my game made a surprise visit. My new friend from Tencent, YiCong, also stopped by and I got a chance to show the development tools I wrote to make the game. As the sole engineer on my team, I don’t get many opportunities to speak about the behind-the-scenes challenges of production and supporting a live service. It felt so incredibly validating to have a fellow developer take delight in the feats I’d accomplished. 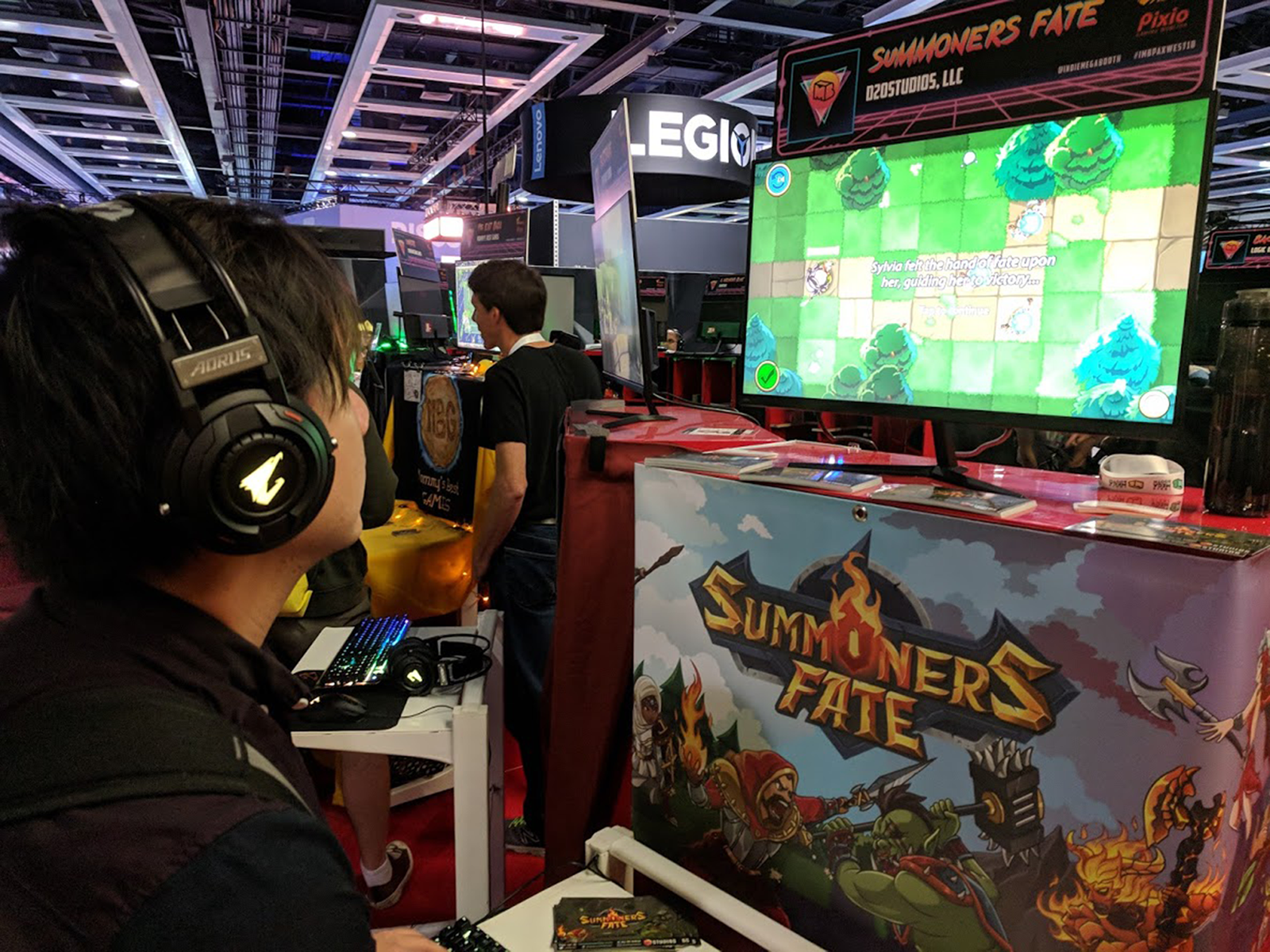 On Sunday evening, Indie MEGABOOTH hosted a mixer event for the devs and their sponsors that included several publishers. The party itself was incredible: free food and drinks, arcade and pinball machines with bowls filled with complimentary quarters. There was no pressure of having to make a sales pitch, just casual conversation and engaging stories of our experience and getting to know each other. This was an opportunity to show your true self and realize how small and intimate the game industry is: Nearly everyone knows, has worked for, or has a friend who worked with someone and we're all just regular people with a desire to fulfill our potential doing creative work.

The Moment that Made the Show

The most intense moment of the show happened when I least suspected it. I had just sat down behind the booth for lunch, legs tired and back sore from three days of nonstop standing, when I overheard a group of people playing my game. It was their playful banter and obvious enjoyment of what they were experiencing that got to me. I only heard fragments, but I remember a woman saying "What are you doing to these poor animals?!" and a guy responding "You don't understand, this is WAR!". “Now watch this watch this... Mutant squirrel!! Squirrel army!!” And then just lots of laughter. I knew at that moment this was the highlight of the show. Something about just hearing their joyful commentary, not knowing I was there, made it all the more sincere and meaningful. I had made something that gave them a moment of happiness, and I was fighting hard not to cry and not to laugh at the same time.

The MEGABOOTH concluded with a group photo and hugs goodbye, then I headed for the airport. It was a successful show. I certainly had a lot of luck, and yet there was one specific choice I made that helped achieve this outcome: having a positive attitude. If I could offer one piece of advice I've validated time and time again from my experiences: When you engage with others in the community, give them your true, honest and open self. Pause and listen attentively, open yourself to feedback and the wisdom others have to share in their stories. Recognize and admire the work and talent of others.

Attitude and perception works like a mirror: when you seek out the best intent in others, it reflects back the best intent in yourself. From this, positive things unfold, like a gentle current that carries you along in a series of exciting adventures.