Is Kickstarter still the best option for Indies? In this analysis, MagicGuiso´s CEO, Adrián Novell, explains why he thinks it is not.
Adrian Novell
Blogger
August 27, 2015

Hey there! My name is Adrián Novell, Creative Director of MagicGuiso, a young argentinean videogame company, formed by 4 people. Small but with experience, as we´ve been working for years in the industry.

Our first game (and the only one as of right now) is called SkyRider & the Journey to the AirCitadel. It´s important to talk about the game because the company was born and formed around it. 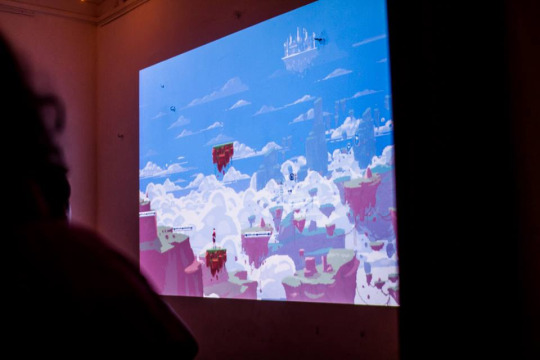 . SkyRider in a game show

I made a prototype, showed it to some co-workers and they liked it. An artist, a programmer and a musician said: “I wanna be part of this”. We didn't want to make a company, we just wanted to make a game. And we still want to. But it is a PC game, it isn't a mobile one. We can't do it in three months. It's a relatively ambitious game and we are really demanding about the quality of the games that we do.

This is at the same time good and bad. For one side, it allows us to generate really good stuff, but also demands more time, dedication and iteration. Also, as any argentinean entrepreneurship, we have to struggle with a lot of the political conditions of our country: devaluation, crisis, instability. But something that we have in our favor regarding all that is that we now have the ability of resurging, fighting and being creative.

In November 2014 I quit my job in order to be available full time for SkyRider as we needed someone to take care of everything related to marketing, planning, level design, documentation. Something like a producer / executive producer / game & level designer.

I was going to live off some savings till the game got funded. I used good part of those savings in order to travel to San Francisco and assist the GDC. I failed, it doesn't matter. It was a very different event than I imagined and I hadn’t properly prepared for it. 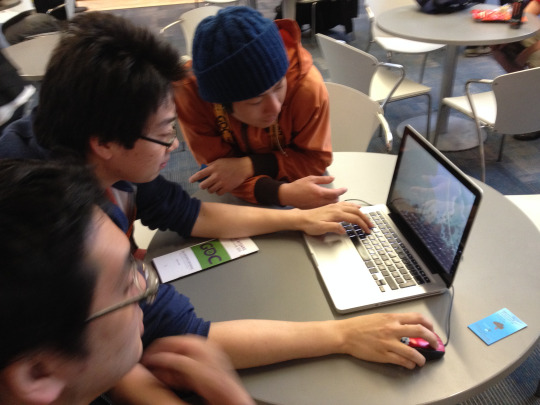 . Some Japanese guys playing SkyRider at the GDC

Again, it doesn't matter. The experience was great and the few people that saw the game reacted very positively to it. Only option was to keep moving forward. And where was that “forward” heading to? What was the next step?

We decided almost unanimously that it was going to be Kickstarter. Why? Because we needed to find the most friendly way to get some initial funding that allow us to work full time and together. It became something necessary to have the game ready in a good and fast way. We also believed in our product and in the platform.

After fighting with some huge barriers that Kickstarter have to non North-American citizens to publish, we were on our way. The campaign was live, but it wasn't successful. Of 40k usd that we wanted to raise, we only got 8k.

And here is what I really want to talk about. Kickstarter, as some good people told us, helps small entrepreneurs get some funding in order to start their business.

I remember some interesting projects of small companies that easily got funded while asking thousands of dollars. Without going any further, in my country, Agustín Cordés got his project, Asylum, funded after asking for 100k usd.

Websites like Kotaku, IGN, IndieGames, Killscreen, Polygon, etc, covered Kickstarter project after Kickstarter project. Press wasn´t afraid of telling people how good a game looked and how much money they needed. Indie game scene was highly benefited from all of this.

But a few things happened. First of all: the games weren't always finished. The promises weren't always kept. Even more, as this report says, of 366 successful projects between 2009 and 2012 only a third of them had the game ready in 2014 (http://evilasahobby.com/2014/01/18/kickstander-only-around-a-third-of-kickstarted-video-game-projects-fully-deliver-to-their-backers/). And at this sheet anyone can check how the projects are going in real time. It´s groundbreaking how much of them don't keep their promises (some even don't send their rewards!) https://docs.google.com/spreadsheets/d/1lFW2sjShHriYRsyuVZx4Se8Qxjw38VJk4g-7cls8cpg/htmlview?usp=sheets_home&sle=true#

All of this reduces the credibility of small projects, and those that want to do things right are the ones that end up dealing with the consequences.

Another problem, in my opinion, is that some kind of “Gold Fever” was generated at Kickstarter as people saw the money in it and then a lot of projects started coming. Some were good, some were not that good, and the vast majority was trash. This flood of projects scatters the public’s attention, and a few good projects don’t reach their funding goal because money is divided among all, the good and the bad.

The last problem I can see is that many projects and people are not having the same reach, the press coverage was lesser or non-existent. The press stopped writing about Kickstarter projects. Without going any further, our campaign amazed some of the press, but the answer was the same:

“We love your game! But we don't cover Kickstarter projects anymore”

The start of our campaign was delayed several times for different reasons. The most recent was that we didn´t want it to overlap with the E3. Curiously, at the last edition of this event, something really strange happened. Sony revealed a Kickstarter project: Shenmue 3.

It asked for 2 millions. Got more than 6. Did they need them? No. But Sony wanted to know if people were still interested in a game like that. The Bloodstained project creator, Koji Igarashi, explicitly says in his campaign video that he is using Kickstarter to show some publishers that people is still interested in games of that genre.

The press only gives coverage to these projects. Can we blame them? No, it makes sense from their point of view. Can we blame people of believing less and less in the smaller projects? No, it also makes sense. I'm pretty sure that there are thousands of reasons that drove everything to this situation, but the most important one is that things are difficult to those that really need the platform to go independent, or to achieve their dreams.

Those that get up early in the morning, go to the office, come back late, have some coffee and work all night till dawn, sleep one or two hours in order to start the cycle again, Those without free weekends. Those that lose friendships because they invest most of their time in something that fills them with passion. 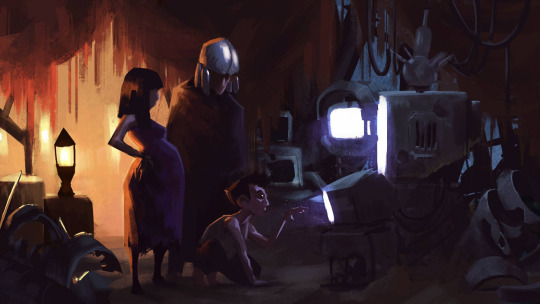 . Some concept art from our Artist, Damián. He is a living example of that “sacrifice” I was talking about.

This is the effort that needs a kickstart. Shenmue doesn´t need it. Bloodstained either.

“But, Adrián, did you guys do everything right?”  Of course not. We made a lot of mistakes. The main one as I see it was not having a strong fan base before launching the campaign. Not spending several months of sending emails everywhere and showing the game in every forum. We tried, but we should have tried harder.

We felt, innocently (or stupidly) that only with the help of our inner circle and families, 20% of our goal could be reached within the first few days of campaign, something really important to our aspirations of getting funded. We didn’t reach that percentage, but not for lack of will of our friends and families. They had good intentions, some friends and known people even helped us with 300 dollars or more (and we can´t be thankful enough with them!) but in Argentina we are far away from having the financial possibilities and payment resources that we could have if we lived in the US, for example.

We also failed at the preparation of the campaign itself. Basic things that had to be there but weren’t because we lacked attention at the details or forgot because of the pressure.

For example: we forgot about speaking of the platforms that the game was gonna be developed for, the actual development stage, more interesting images of the rewards (t-shirts, art book) and the “why are we asking your money in kickstarter” section.

The good thing about Kickstarter though, was the opportunities that came from there. We started having a dialogue with a couple of publishers and people that want to help us make this game a reality. We went through steam greenlight process in less than one week and we also met really cool people like the StarrMazer guys. 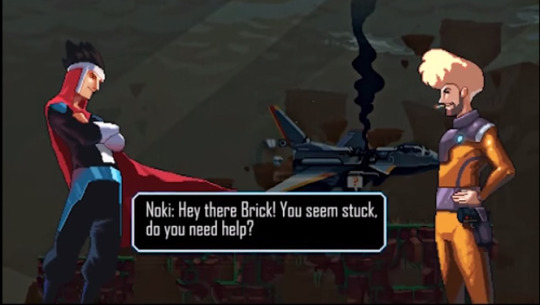 . Cross Over between Noki and Brick.

The support we received from everyone is also something that we will remember. Because we may not have made it to the goal, but a lot of people flooded us with love and supportive messages. And that is a really valuable thing from Kickstarter: everyone that believed in us gave us a bigger kick to really start.

Want to try out our demo? Download it here: http://gamejolt.com/games/skyrider-the-journey-to-the-aircitadel/75697