Kickstarter and Failure: The Futility of Doing Things Right

One indie developer is doing all the right things, and yet his Kickstarter is on its way to failure.
Edward McNeill
Blogger
March 04, 2013

Aaron San Filippo is an indie game developer. More importantly, he’s a nice guy. He gives a lot back to the community, writing articles and doing interviews, and he’s always been polite and positive in Twitter or email conversation. We’d all be better off with more people like him.

He and his brother are making a game. This game is called Race The Sun, which takes the endless action of games like Cube Runner and cranks the speed up to a ridiculous degree.

More importantly, they’re making this game in all the right ways. To start with, they released a free playable alpha to get feedback from players. (That was enough to make me a fan. They nailed that feeling of speed.) Then, in a bid to avoid going free-to-play, they introduced a creative and novel indie funding scheme called Votables. Then, they revamped their game to win over the critics (“The new version comes to life… The game now has flavor, and more action. It’s a marked improvement.”).

And yet, their Kickstarter is failing. 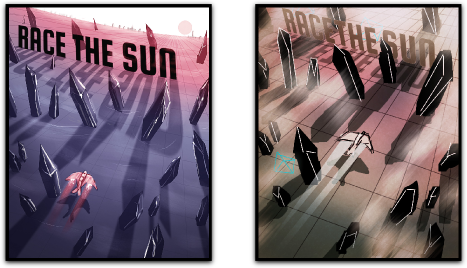 Maybe they’ve run into the long-predicted Kickstarter Fatigue. Maybe their social network just wasn’t wide enough to get them a good early start. Maybe their game just isn’t inspiring people. Whatever the cause, I just feel bad when good people are failing to find success.

Of course, there’s still a few days left, and anybody can push the game forward towards its goal with absolutely no risk. I’m reminded of Mike Hanson’s recent comment about running his Kickstarter: ”Publicly, I tried to remain optimistic but I’ll be honest, it was hard to read so many variants of: ’I'm holding my money back until I see that it’s going to be a success.’ hitting my Twitter, Facebook and email feeds… Man, that’s something I still can’t get my head around now. Are so many people that frightened to be associated with a failure story?”

If you agree that Aaron and his brother are Doing Things Right, support their Kickstarter. If they succeed, then you’ll be rewarding the good guys and you’ll get to play a better game to boot. If they fail… well, you’ll lose nothing, but I’ll lose a bit of faith in the wisdom of the crowd.