The same few developers get their games featured week to week. Game details show "Top Grossing" and to even show up in the top section, games must have serious marketing budgets to garner the necessary downloads. Can this change?
quantum potato
Blogger
September 28, 2015

Lost in a Sea

Discovery on the iOS store is completely broken and Apple doesn't care. Browsing the App Store allows you to sort by "Top Charts" and "Featured". This creates a runaway positive feedback loop where the top selling games STAY the top selling games. How many times have you seen "Clash of Clans" up top? There's no option to hide a game once you've seen it and purchased or dismissed it -- so the consumer's view is cluttered by these digital billboards.

Well there's more than Featured, you might say. For example, scrolling down in the All Games group I can see a PAY ONCE & PLAY collection and ARCADE SHOOTER collection. This gives an indie developer hope, until you realize that there is no published schedule of what game collections will be featured when -- so there's no way to optimize your production around a game collection. As far as I can tell, Apple looks for games to gain many downloads & reviews, letting the consumers do their low-level content filtering to decide what to feature. This works, and this sells more games, ads & phones but it does nothing to help independent developers attempting to make a living with a modest download count.

This opaque featuring process is very frustrating for me personally. Last fall for the October Ludum Dare I released Quantum Pilot, an arcade shooter where the enemy ship copies how you kill them, so you have to outsmart yourself. From then until now I have been visiting conferences (Indiecade & ECGCONF), observing playtesters, gathering feedback, updating the game, all for the sake of making an excellent game to bring joy to players. It is a "Pay once and play" arcade shooter -- yet I have no idea how those game collections were formed, or if I could have done anything differently to land a feature spot. 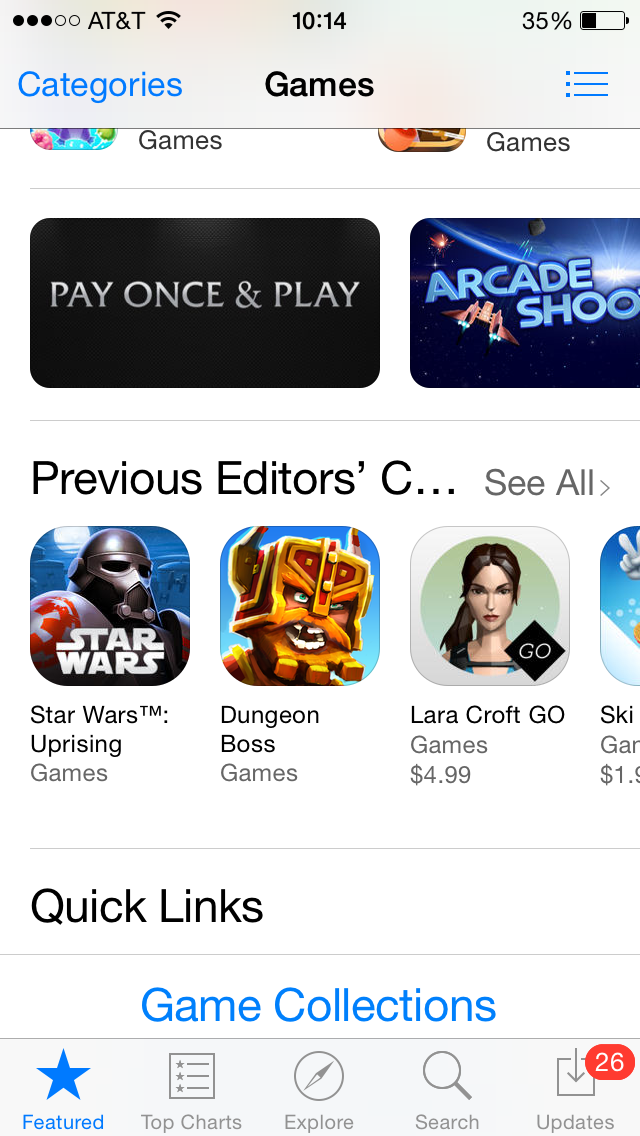 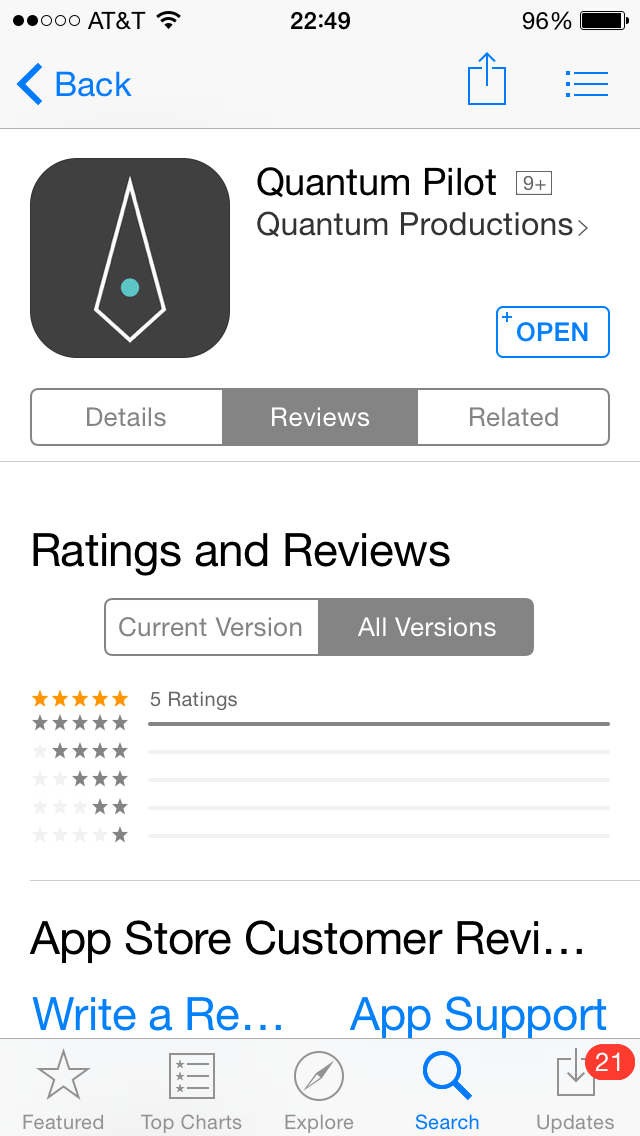 RIGHT: A pay once & play Arcade Shooter with Replay sharing.

Undeterred (I'm clearly not doing this for the money), I released a sequel, Quantum Pilot 2, a free game with a new mechanic and in-app purchase for more weapons. Browsing my iTunesConnect sales today, I was curious  how anyone at all found the game on the App Store so I tried to find it myself. After 3 minutes of browsing, I couldn't. Viewing new games was called "Best New Games" -- curated by Apple. I could sort by release date under All Games, maybe that's it! I scrolled down and the App Store loaded a second batch of games. Great, I thought, I'll just keep scrolling to find games released yesterday. But the scrolling stopped. No additional batch was loaded. So Quantum Pilot 2 was downloaded by people who just happened to be in the New Games by Release Date section at the day, if not the hour, of release -- or they knew to search for it thanks to my grassroots coffee shop marketing.

Obviously I need to figure out how to efficiently market my indie games -- there's only so much I can juggle at once making a living, making games, cooking anad exercising. I feel that if Apple would just play my games, they'd love them, as dozens of play-testers have. Perhaps if I market to other indie developers? Brian Gibson of Thumper and Lightning Bolt fame played Quantum Pilot at the IndieCade after party, where Thumper was being featured. "Genius" he called it. But will he tweet about it? No -- he's marketing his own game.

Ok, so how do I get in with Apple? It's here I realize that many of the featured developers have been FEATURED BEFORE. More specifically I've noticed Ketchapp and Appsolute Games repeatedly showing up with at least 1 game in the Featured section when I check it every few days to search for commonalities between featured developers. If you do a search for either of these names on the App Store you'll find dozens of games -- many of them very similar to each other. I respect that these developers have found what works -- making simple action games with ads + in app purchase powerups, using Apple features to garner thousands of downloads, make thousands of dollars, repeat. Perhaps saving up to make the games they "really want to make". (I hope they don't want to make the same endless jumpers & reaction games forever..). 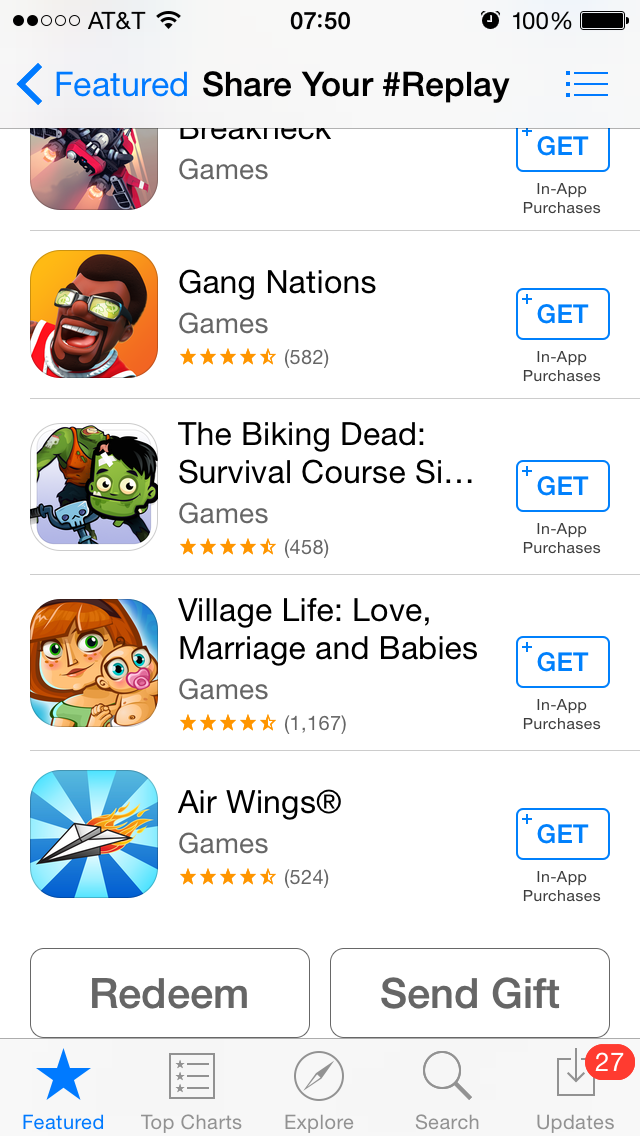 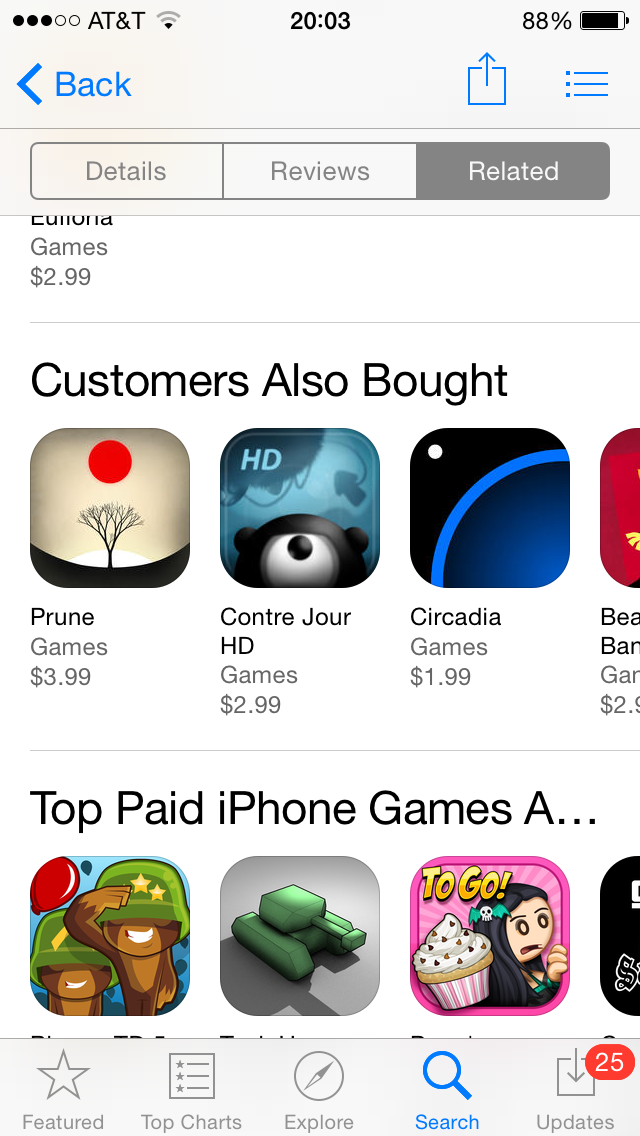 I texted a friend who used to work at Apple, searching for answers. "10k downloads" they said. "10k downloads and your game will start showing up. You have to do your own marketing". Well, there's the answer straight from the source. Producing an indie game nowadays is more than content creation. When games were low in supply and a new arcade game was built or a new steam game released, thousands flock to partcipate in the new experiences it offers. Now, anyone can make a game so everyone is making a game. It is not enough to build a "good" game, as Daniel West pointed out recently.

Ultimately, Apple has a large monopoly on iOS game discovery. Maybe this will change with their new Twitter account, @AppStoreGames, but so far I've seen this used to market already high-grossing games to further the feedback cycle lining Apple's wallets. I can only hope that in the future, consumers will be able to subscribe to Developers to stay updated on their releases. If a Developer page could link to "Recommended Games", iOS Game Developers could perform their own "Genius" recommendations.

These are just fantasies, however. In the meantime, I'll just have to continually iterate on my craft, gaining experience until I make something "sticky" enough that it "goes viral" immediately upon Consumer eyes. I fear for the future of game development as we continue to devote more resources into marketing & viral transmission of our games detracting from gameplay and aesthetics.