Can indie developers breath new life into flagging video game retailers? I decided to try and find out
James Coote
Blogger
May 21, 2013

It should be obvious to all that bricks and mortar stores selling video games must adapt or die in the face of digital distribution. To make those physical spaces justify the overheads they generate, there need to be reasons for people to come into the store and spend their money in person, rather than simply going online and having their purchases delivered to their front door or downloaded straight to their gaming device of choice.

One possible avenue is to get indie game developers into the stores to demo their games. This gives indies a platform to showcase their work, get feedback from the general public on their games, and provide a new way of connecting with their audience. For the store, it means an added attraction to bring people through the doors.

It just so happens that I’m working on a game for the OUYA, which is being retailed through GAME here in the UK. Since OUYA have been pushing how ‘open’ their platform is to develop for, there haven’t been the NDA’s or legal issues one might usually expect with grabbing the devkit and publicly showing it off to everyone and anyone who cared. In fact, this was something I’d already taken it upon myself to do, organising a number of meetups of developers and fans prior to the console shipping to kickstarter backers, as well as taking it to the Gadget Show Exhibition and an Anime and Comic convention (MCM Expo) down at the NEC

While the cost/benefit equation of these events is somewhat questionable from a pure sales point of view, in terms of increasing exposure and the possibility of generating press interest, they are well worth it. Plus they are just fun to do for an indie developer working from home and not getting out enough.

The logical extension would be to demo the OUYA (and by proxy, my own game) in branches of GAME, and after approaching them about the idea, they proved receptive and willing to give it a go. So, last week I headed down to Northfield, a suburb of Birmingham, to the local branch of GAME to test drive the idea.

Position / Setup
Full credit to the guys at the shop, who before I arrived, had collected together all the OUYA boxes in the store and arranged them on an old PS3 stand. While some people were a little confused as to what the OUYA was or mistook it as having something to do with playstation, the setup by and large looked the part. 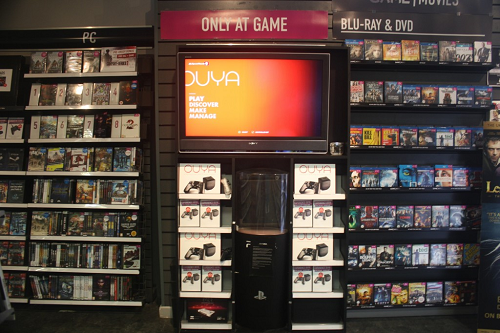 Engagement
People responded really positively to the live demonstration, whether they were just watching myself or others play, or actively trying it out themselves. Also, not only being able to respond to customer’s questions directly, but not being directly affiliated with OUYA, I was able to honestly address some of OUYA’s shortcomings, which helped build trust and a rapport with customers

Local Multiplayer
After a bit of experimenting with various games, I came across a couple that really let people jump in quickly and play with/against each other. This was a big bonus as lots of customers were out shopping with someone else (A husband and wife, or mother and child, or group of friends etc). Or alternatively, seeing one person play would often draw the interest of another unrelated customer, and being able to have them hop into the game was a big advantage in retaining their interest

OUYA
The small size of the OUYA made it easy to transport and get set up. The downside was that it wasn’t obvious until pointed it out to the customer, that the little box, tucked away in the corner, was actually running all the games. Also having the devkit, which is a different colour scheme to the version actually being sold, caused some confusion and questions about whether it was available in different colours (and why not?!)

No Internet
Although unfortunate from the perspective of being unable to demo the online multiplayer games, it meant there would be no issues with customers attempting (accidentally or otherwise) to make game purchases on my credit card. Having already downloading a good selection of games before hand ensured that there was enough variety in the titles on show to make the console feel rich and varied content wise. The (online) store being unavailable had the added bonus of focusing customers’ (and my) attention on those games I had pre-selected to show. The OUYA has also been criticised for having a laggy UI, but since there was no need to exit the game library and navigate around the rest of the UI, that particular problem didn’t come up at all.

Furthermore, no one was exposed to the lower quality games lurking in the depths of the store, and no one asked for specific games to be downloaded on the spot (which would inevitably have meant hanging around ages for it to download, causing everyone to lose interest in the meantime).

Footfall
The number of customers who actually came to the shop that day was disappointingly low. Far lower than expected according to staff, considering a couple of major releases were coming out that day.

No Promotion
I was in such a rush to get my game ready in time that I didn’t do any promotion of the event beyond a few tweets the day before. No attempts to contact press or otherwise generate interest beyond (figuratively) grabbing people as they walked past in the street

Game Specifics
My own game is both quite abstract and complex (requiring players to get through a substantial tutorial before they can really get going), and slow paced. As a result, I found it wasn’t really hitting it off with customers, so in the end I didn’t actually demo it to that many people

Closing the Sale
In terms of generating extra pre-orders of the OUYA, I was quite poor at getting those genuinely interested to actually commit the £10 pre-order deposit. That’s partly because I suck at sales, but also due to it being too easy for customers to get out by saying they can just buy it when it comes out.

Securing the OUYA and Controllers
Being small and light, and having completely wireless controllers meant that someone had to keep an eye on the equipment at all times to avoid it getting stolen.

Limited Play
Some games I had not played extensively enough prior to demoing them, only to discover that they used a limited number of plays per day, leaving customers disappointed that they could not continue.

From a practical, proof of concept point of view, the whole day was a success. However, as already mentioned, it clearly isn’t effective in terms of raw sales generated for the indie, and in terms of generating press interest, it’s only going to work once or twice.

Interestingly, in discussing these issues with other devs, the example of Games Workshop came up a number of times. Every store has a dedicated space for players to come in and play tabletop battles together. Even if just watching other people’s battles, it brings people into the store with something exciting and participatory, which in turn helps create a lasting connection with the product and relationship with staff and other members of the community.

Stores like GAME already do a similar thing, with consoles set up for people to have a go at playing the latest games. However, what Games Workshop also do is run sessions for beginners, and for helping improve people’s skills in painting and crafting scenery.

As it happened, I’d help arrange for a number of other developers to demo their own OUYA games at GAME, including Jamie Lowes of Vamflax, who headed down with his own game, Chopper Mike, to the large GAME store at the Bullring in Birmingham the day after my own adventure. 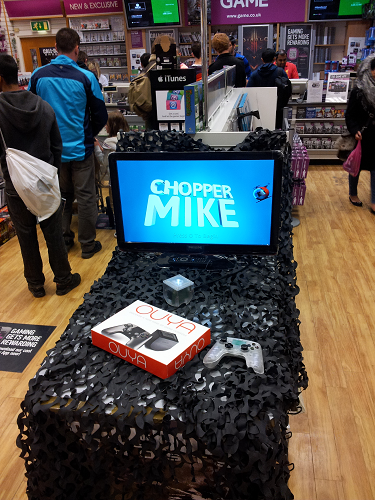 One thing that he reported came up repeatedly was that customers were also enthusiastic in getting into game development themselves. It makes sense that people think to themselves “I can do that as well,” especially when the developer is no longer remote and hidden behind corporate logos, but there in person and able to talk about the issues that directly affect game development

Retailers could co-opt the indie community by providing the co-working spaces and environment where they can get out of the home office and interact with other developers and gamers. Get feedback on their latest builds or inspiration from what others are doing. A sort of indie games incubator that doubles as a store and hub for all things gaming related.

Indeed, there are still many unanswered questions when it comes to retail. Perhaps the game industry will trend back towards larger, more professional studios and indie games will once more cycle into the background world of underground niche development, making all this irrelevant. The incoming new generation of consoles will no doubt boost retail and allow long term issues to be kicked down the road for another few years.

However, these are questions that need to be answered now if retailers are to have enough time to make them work before the inevitable changes in the industry finally catch up with them.

I’ll be trying to answer some more of those questions when I demo the OUYA again at GAME Perry Bar on June 1st. If you missed the chance to play Chopper Mike before, you can catch up with Jamie Lowes in GAME Solihull also on June 1st. Martin Caine of Retroburn Game Studios will also be demoing, at GAME in Leeds, again on June 1st, and also June 2nd