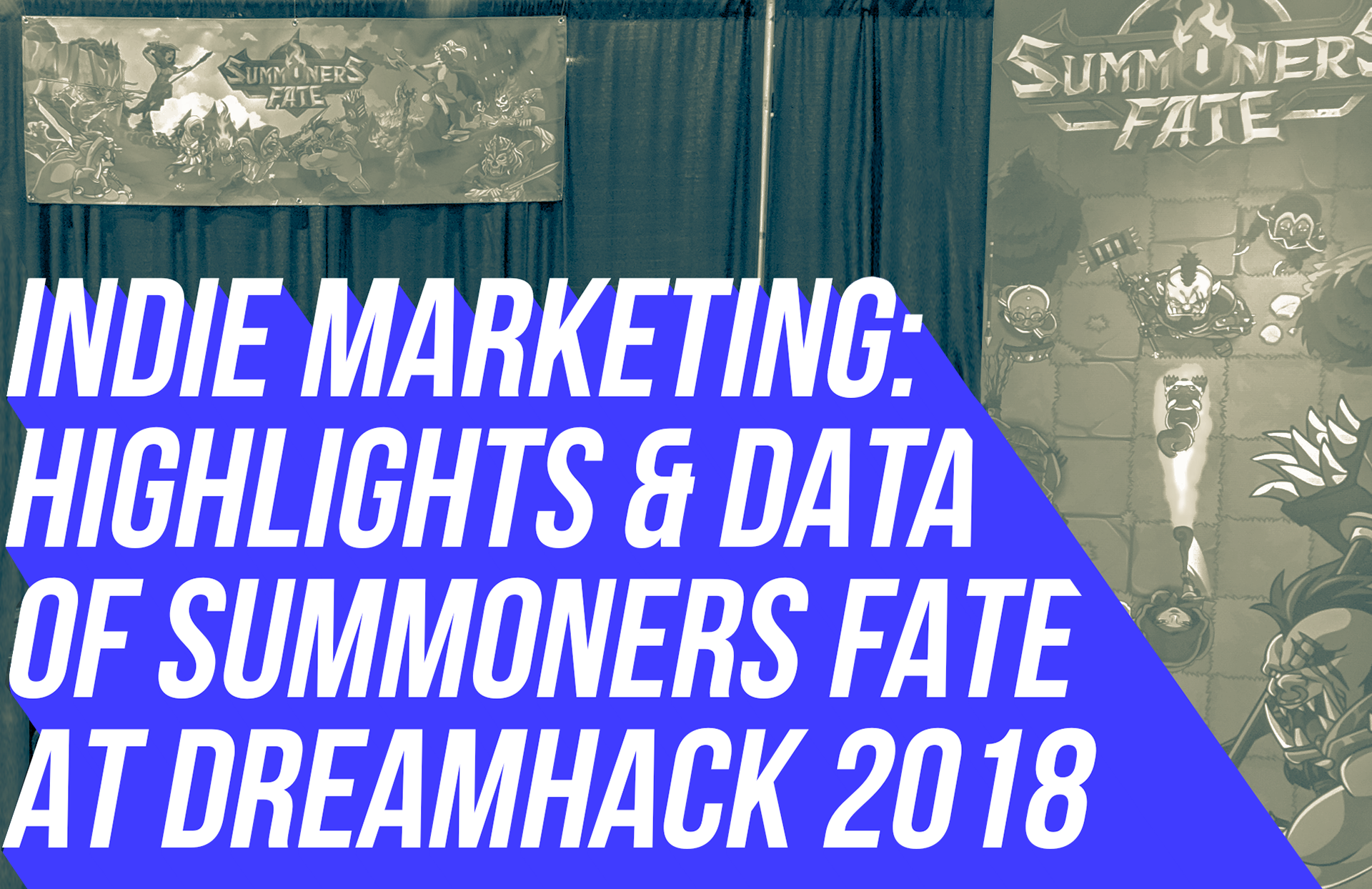 For those following my indie game marketing, this is the third article in that series (see part 1 and part 2 for our experience and data on PAX West). It’s my aim to capture both the subjective highlights and empirical data of our experiences so that myself and others can learn what to expect and how to improve our marketing. In this article, I share our marketing strategy, budget, event highlights and data of our Dreamhack Atlanta 2018 showcase of Summoners Fate.

What is Dreamhack and why did I showcase at their 2018 Atlanta Expo?

Dreamhack hosts several conventions internationally each year focused on eSports and multiplayer gaming. If you’ve ever experienced a LAN party where a group of friends all bring their gaming PC’s to play multiplayer, Dreamhack is like that except with thousands of people. 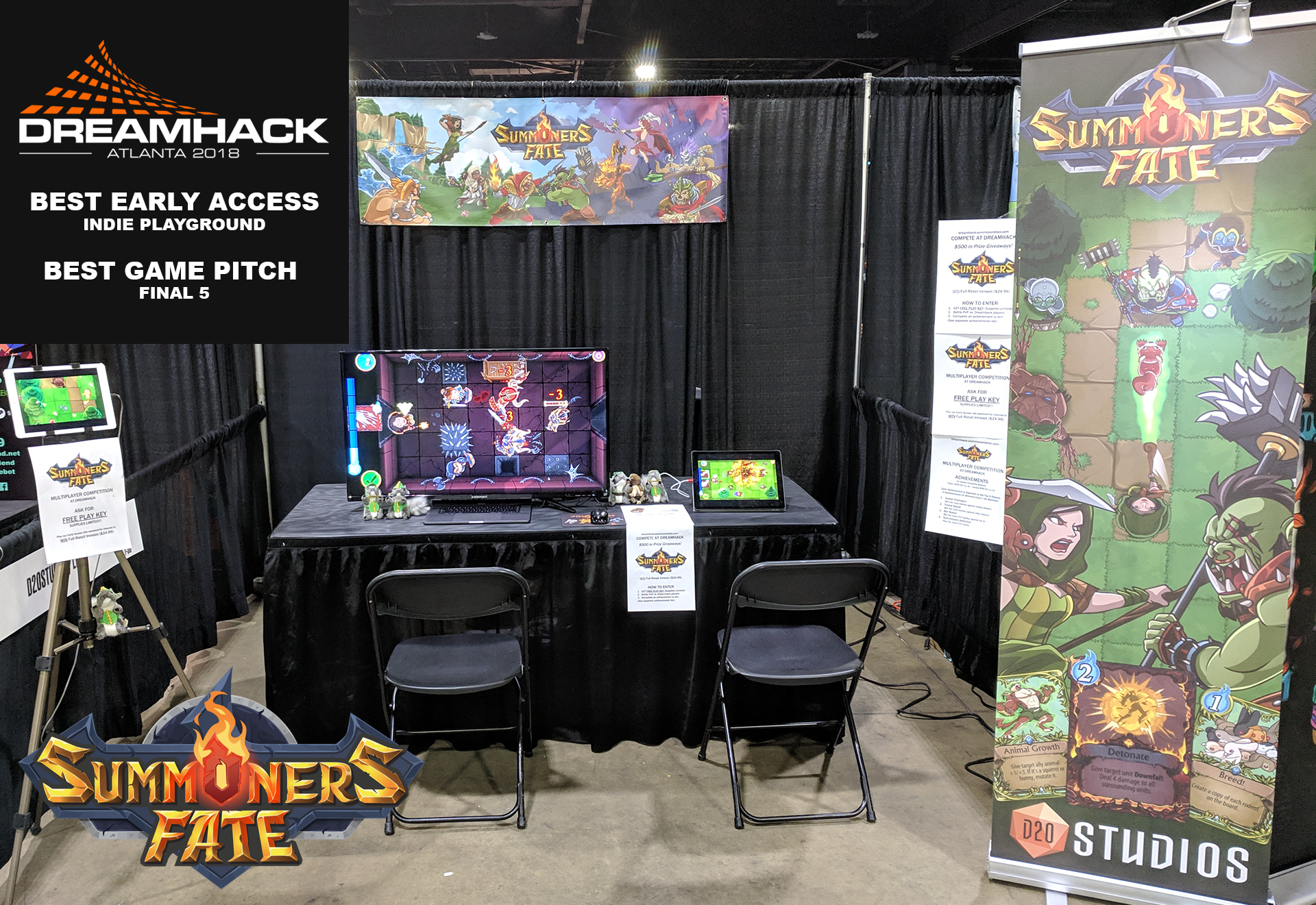 My teammate Peter and I made the trip. To maximize our potential, we planned a 4 demo screens booth consisting of a 39” TV main monitor w/laptop, iPad Pro, iPad Air on tripod stand and a Surface Pro. For signage, we leveraged our existing horizontal banner from PAX and purchased a new vertical standing banner. Since the event allowed attendees to bring their own computers with internet access, we brought 300 keys for our early access multiplayer demo and hosted a contest to motivate players to actually play our game on the showfloor with their friends. Additionally, we held a social media contest, asking players to take pictures playing the game together to win one of Peter’s hand-crafted armored squirrel plushies.

This is how we get you pumped to play Summoners Fate 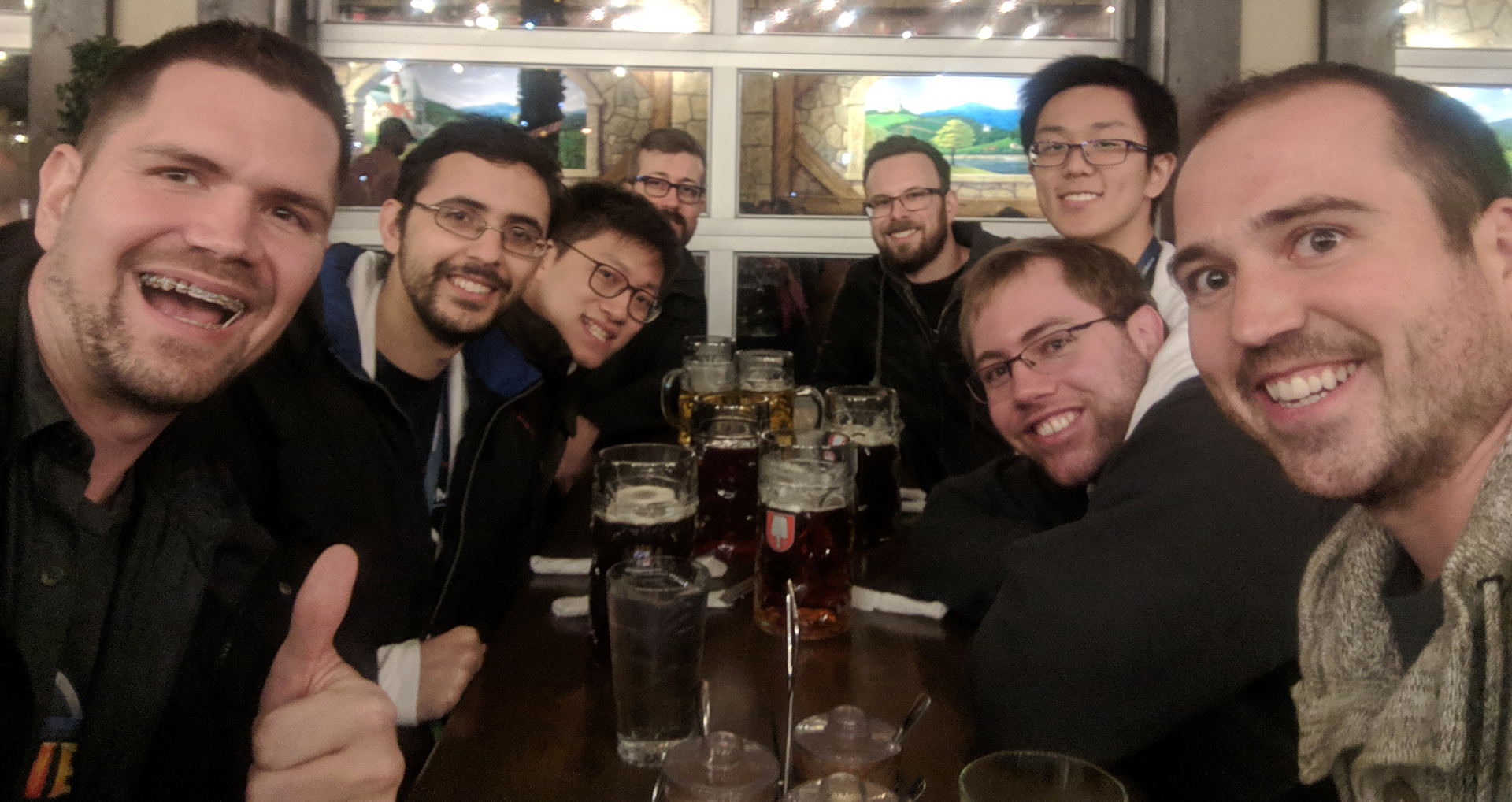 Here’s the summary of the data we collected with our demo analytics. For more information and a comparison to our PAX data, see here. 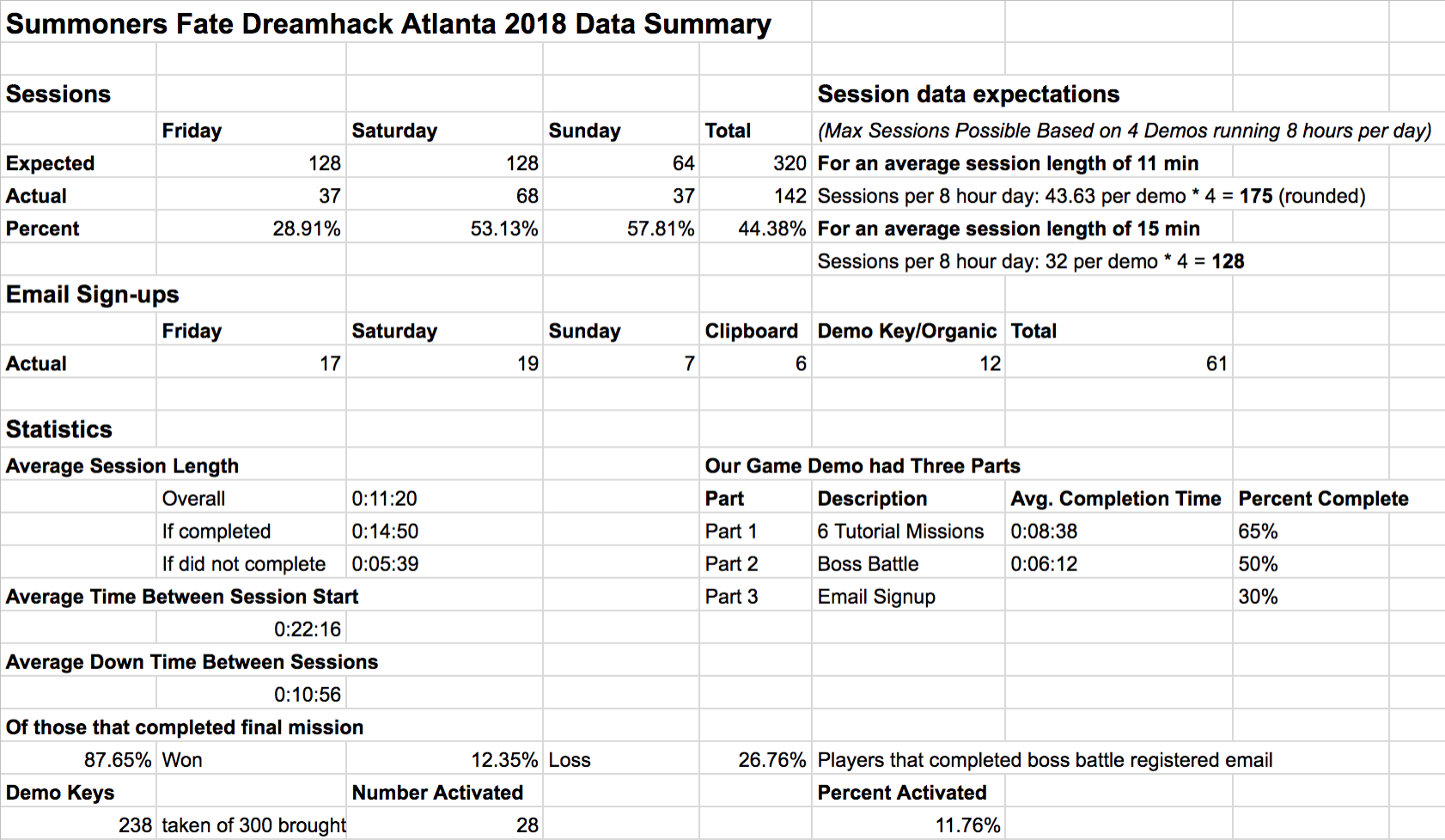 Foot traffic was half what we expected, so we took a proactive approach of drawing players in by enthusiastically asking them “Would you like to throw a squirrel at your enemies?!” This was effective at turning heads “What?! Did you say throw a squirrel…?” Coupled with a friendly handshake and a personal introduction, we perfected the process of getting players in the demo seats and were among the most effective indie teams at maintaining an audience.

I’m continually seeking to learn how to effectively mobilize our fanbase to action. I think we had the right creative ideas with our multiplayer contest and squirrel giveaways, but we could have done a better job communicating the actionable steps and making it easier for players. This is a recurring lesson for us with all things marketing: continuous, clear and repetitive communication is key. I’ll sometimes think our message is obvious, but the data says: “Hit folks over the head with it!” I think of that Simpsons episode where Bart joins a boy band sponsored by the Navy. You need to use the subliminal, liminal, and superliminal: “Hey, YOU! Join the Navy!” 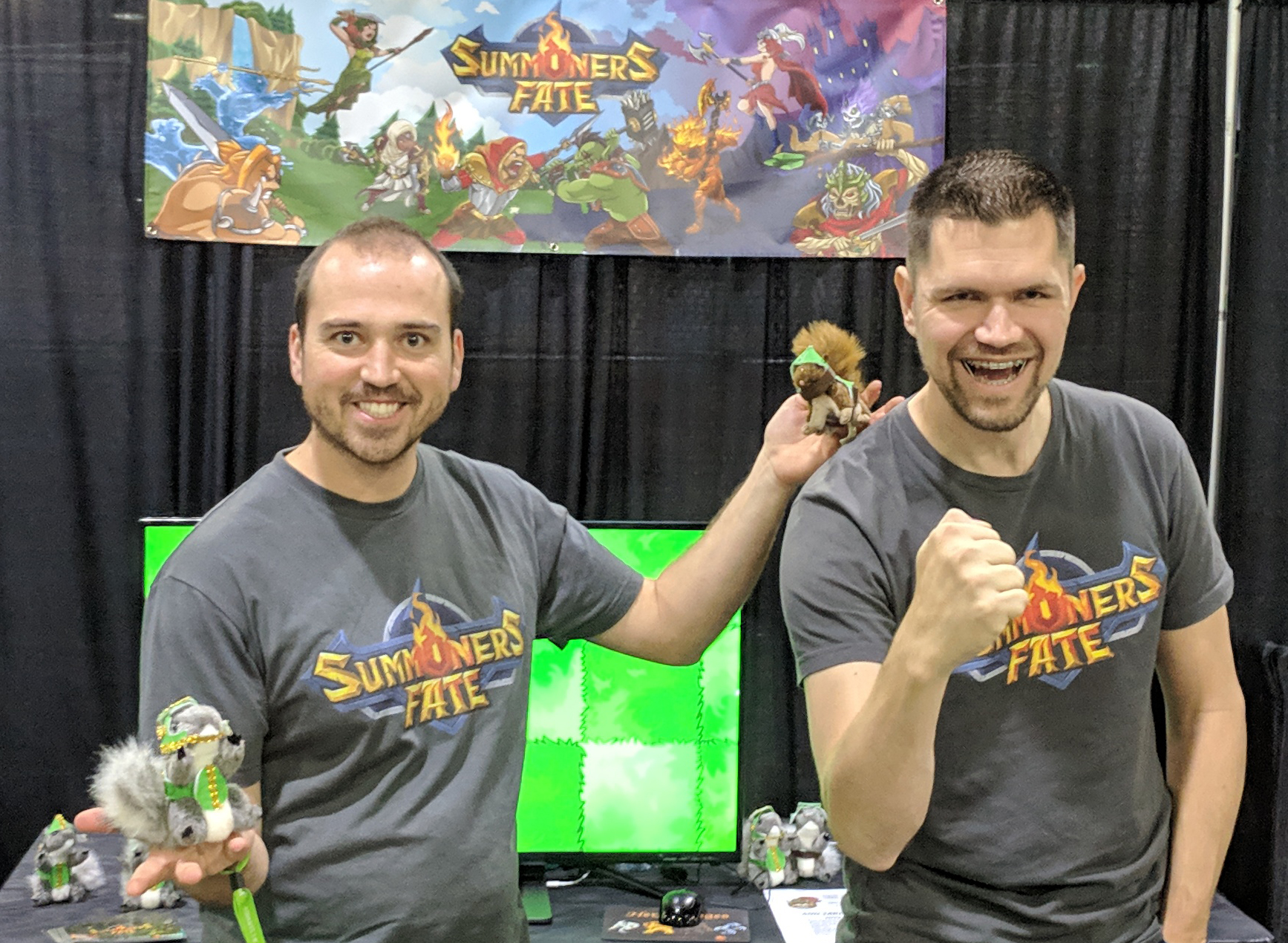 Peter and Ross are pumped!

All together, Dreamhack was a great stepping stone and learning experience. We succeeded in attracting passionate new fans, gaining valuable experience pitching our game in front of a live audience, and made another milestone towards raising brand awareness amongst the gamer community.