This is my contribution for data-points on the Indiepocalypse. Wherein I compare my best-rated and best-selling games.
Bram Stolk
Blogger
December 12, 2018

There were times when it was easier to make money with indie game development. Could it be that it is near impossible after the indiepocalypse?

Jeff Vogel kicked it all off with his article on the indie bubble and the indie glut.

Ryan Clark said 'no such thing'.

Mike Bithell said we do not know, and advocates for getting more data.

I have an interesting data point to contribute....

For fun, let's ignore the time-in-market for now, and calculate that in 2018, it is over 15,000 times harder to make money from your indie game. 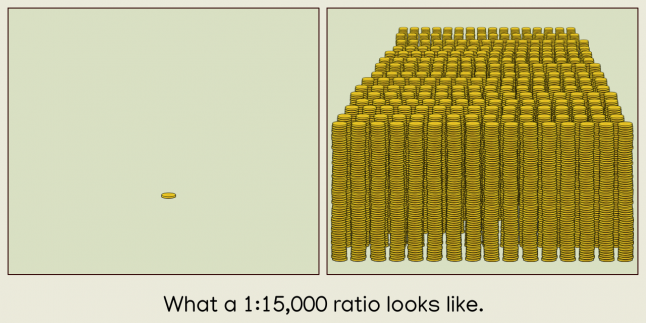 Heh, not really of course, since pay-offs in game development are highly non-linear. A game that ranks a few percentage points higher in the top seller rankings (and thus visibility) can easily see double the revenue. Revenue per title typically goes up exponentially as you climb up the charts.

But the fact remains... the newer title (that is rated higher by its players) sees effectively zero revenue when compared to the older title.

Granted, 'Flank That Tank!' may still be the weaker title. But let's be frank: if it is rated higher by its users, could it really be that much worse that 'The Little Crane That Could?'

So, is this a Google Play thing, then? Well, not really, the ratios on the iOS App Store are even more extreme.

But the Google Play marketplace got pretty much devastated in the infamous June Extinction Event. Google tweaked the algorithms, and the exposure stopped abruptly. The graph below shows what happened on June 21, 2018, if Google closed the tap for your impressions. 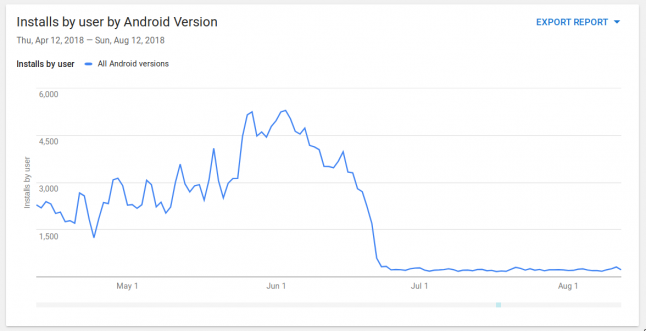 Poof! And it's gone.

On the iOS market, this was a much slower death. The biggest blow came when Apple stopped showing apps sorted by release date in 2012. No more 30 minutes for you in those oh-so-bright spotlights that shine down on your app from millions of iDevices.

The final blow came when Apple made the developers bid on the search results.

So is it a mobile thing, then? That is not it, either. `Flank That Tank!' did a life time revenue of C$43 on Steam. Let that sink in... It failed to recover the US$100,- title-fee, payable to Valve for the right to publish.

So is the indiepocalypse real? This indie developer is inclined to think so.

But I am realistic enough to know that I have been fortunate in the past. I made my money on the app store when precious few people knew how to do OpenGL. Almost no-one had even heard of Objective-C. And doing 3D physics simulation on a phone? Unheard of!

Fast forward to today. Engines, foremost Unity, have opened up development. With less emphasis on arcane coding, more on artistic abilities, the indie game universe exploded. And this is, most likely, a good thing for the consumers. An indie game developer like me is just glad to be running a lean operation without having to worry about staff, or expensive office rent.

Amusing Trivia on the creation of this article: When doing the money stacks illustration, inkscape froze at 100% CPU and had to be killed, when I accidentally un-grouped the shapes. What can I say? 15,000 is a really big number.