In this article, game designer Sande Chen relates the lack of progress on diversity and job stability, as indicated by the IGDA 2017 Developer Satisfaction Survey.
Sande Chen
Blogger
January 25, 2018

The IGDA's 2017 Developer Satisfaction Survey (DSS) was released this month (and can be downloaded here) and in it, you'll find that according to the data, the typical worker in the video game industry, whether freelance, self-employed, or employed, is a 30-something, white or multiracial with white, heterosexual, college-educated, married male without a disability or children.  According to the 2017 survey, 74% of respondents identified as male while 21% identified as female.  Despite growing interest in the importance of diversity, very little has translated into actual change at companies, as can be seen from the similar results on the 2014 DSS survey. 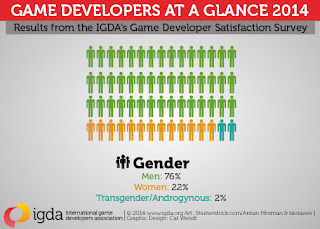 The survey also provided a snapshot of an industry with constant job volatility.  Even though 70% of respondents were permanent employees, on average they had already switched employers twice within 5 years. This is consistent with surveys from prior years. And only 39% expected that they would stay with their current employer for 3 years or less. 53% reported that crunch time was expected at the company and employees would work anywhere from 50 hours to more than 70 hours a week during crunch.

Sande Chen is a writer and game designer whose work has spanned 10 years in the industry. Her credits include 1999 IGF winner Terminus, 2007 PC RPG of the Year The Witcher, and Wizard 101. She is one of the founding members of the IGDA Game Design SIG.
Production
Get daily news, dev blogs, and stories from Game Developer straight to your inbox
Subscribe