My impressions of the [email protected] event for Xbox One indie developers
James Coote
Blogger
December 16, 2013

Having previously attended the Sony (Indie) Developer Open Day, it was Microsoft's turn as I headed down to London for their [email protected] event last week

Actually, I attended the pre-event bar and drinks session the evening before the main event, and it was probably more useful than the event itself! I got to talk to a whole bunch of the [email protected] and wider Xbox team, and even had a chance to impromptu demo one of the games I'm working on.

For those not familiar with [email protected], it is the name for the program under which developers can self-publish their games on Microsoft’s new Xbox One console. While primarily aimed at indie game developers, it is open to pretty much any studio or developer.

Unfortunately, I can’t splurge a bunch of details about what I heard, because the whole thing was done under NDA. But I’ll try and convey as much of my general impression of the event and the [email protected] program as I can, hopefully without jeopardizing my chances of working with Microsoft in the future.

Exclusivity and Xbox One is a hot topic at the moment. Microsoft’s policy is for launch parity with other consoles (i.e. if you release your game on PS4 or Wii U, you need to release on the same day or before on Xbox One).

Lots of developers have pointed out this could cause problems for them. For me, the issue is not so much the exclusivity clause itself, but the timing.

Microsoft have said they plan to eventually make it such that anyone can sign up for a developer account and use the regular Xbox One they bought in the shops to make games on (rather than needing specialist ‘devkit’ hardware). However, they can’t say when that will happen. In the meantime, they only have a very limited scope to hand out the devkits otherwise needed to make Xbox One games.

This means developers can’t plan ahead. If they knew they’d only have to wait a month or two, then those with games nearing completion could delay their launch plans a bit to get them on Xbox One. If they knew it’d be more like six or nine months, they could get on with releasing their current games and plan for their next game to be on Xbox One.

One of my primary objectives going into the event was to find out how long this wait might be, but the problem for the [email protected] folks is that they are constrained by Microsoft’s corporate legal policies with regard to discussing publishing. Even though the event was under NDA, they could only go as far as to drop a bunch of hints (which is probably quite sensible anyway, considering indie game developers aren’t known for being good at keeping secrets).

I suspect the exclusivity / timing issue probably won’t have as much of material effect in the mid to long term as it appears right now. What it does affect though, is the perception of the [email protected] program. I’ve written before over at my OUYA blog about perception wars, and the battle to attract developers is no less fierce between the bigger consoles. 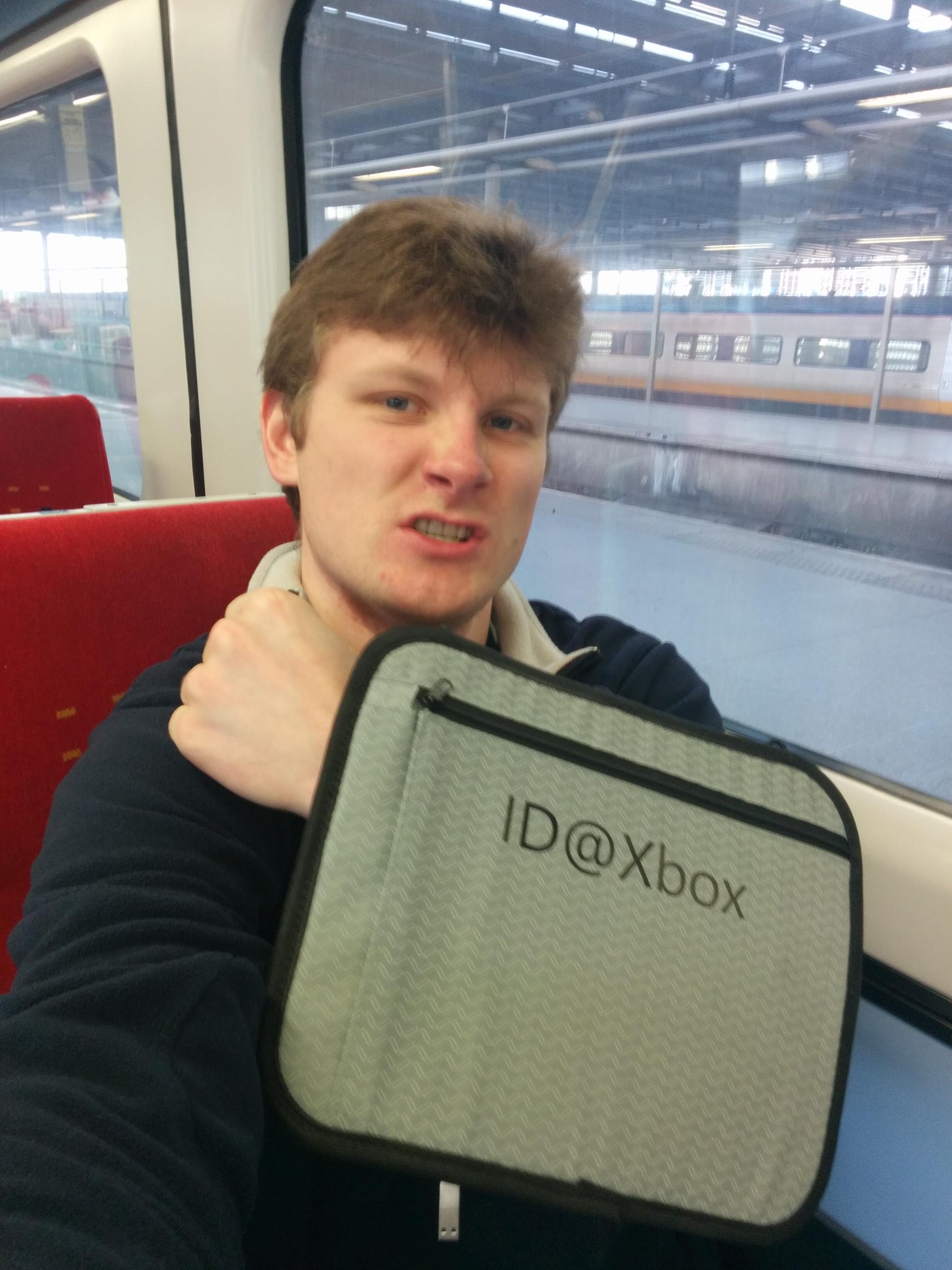 Showing off my new [email protected] shield, for warding off fanboys of rival consoles

Sony is winning that perception war, and in blogs, on twitter and the wider indie community, it is seen to be the leader when it comes to being the most “indie friendly” console. Not that I have anything against Sony, but I've written before why I feel this debate isn’t healthy. In that context, some indie developers definitely took an attitude into the [email protected] event, and I think the Microsoft folks were somewhat taken aback by the borderline hostility displayed in questioning at times. The “where’s my free Xbox?” questions made me cringe and feel embarrassed that they were coming from fellow indie developers.

On a more positive note, the event was chock full of opportunities and hints at openings for developers of all sizes who could offer something above and beyond just another generic indie game.

I’d definitely recommend having a look through the blogs and literature put out by [email protected] to see what sort of things they are “excited about”. I.e. what tech or specific things to Xbox One they’ve invested a lot of resources into and believe could be really valuable. But which need developers to come along and make eye-catching or interesting case studies and examples for. Basically, there seems to be a chance to sell to the platform holder.

Fortunately for me, almost by accident, one of the games I'm currently working on has, I feel, a compelling case for highlighting many of Xbox One's unique capabilities (in addition to just being generally awesome and made of win anyway). Fingers crossed that the [email protected] team agree.

The upshot of the event though, was not so much learning the inner workings of the Xbox system architecture, but being able to meet the [email protected] team and understand where they are coming from.