I spent more than 3 years making a project that went nowhere. Today I'm cancelling it, and I'm the happiest I've ever been.

After 3 years of working on a too-big-for-myself project and getting nowhere, the damage done to my mental health made me cancel it. Now, I've never been happier.
Dan Aronas
Blogger
October 01, 2018

Atmosphere - my beloved project - is cancelled.

It's a statement I didn't think I'd begin with today, but it's a statement that has echoed my mind throughout the years. After reading Josh Parnell’s cancellation of Limit Theory, I think it's finally time to open the door, and let it out.

Atmosphere has been in development for about 3.5, probably closer to 4 years now, and the truth is, I have nothing to show for it. Nothing. I have tortured myself for 3 whole years trying to make something that was way over my head, and failing constantly.

The project "C:\Unity Projects\atmosphere" was born at around July, 2015. It started out as a simple exploration game - you crashed on an alien planet. There's a big map with 4 towers at each corner that you had to climb. Each of the towers had a ship part that you'd use to repair your ship. After you'd collect all of them, you'd need to get back to your ship, and fly back to Earth. That's it. There was no story (unless you can call "fix your ship" a story), your character was a nameless floating camera, and the ship model was made in 5 minutes in Blender. And I felt such joy making that. I felt like a small child discover things for the first time.

But that wasn't enough. Nooo.

Suddenly I got the idea “Why not make this a full-blown narrative space game!?” Bright, right? And so I started. I was mostly experienced in small levels, so that’s what I decided to focus on first. Instead of making it open, I decided to go the linear path, and close things off, make it tighter and more polished. I started bashing some objects together, and they started looking pretty good. (I thought they looked good, at least back then).

Snip. I took a screenshot.

That was all my brain needed for motivation. I thought this would be soooo great, so I created a game page, and said that the game was in-development. This was the biggest mistake I’ve ever made regarding Atmosphere and my other projects. You don’t create a single environment, make it look nice, take a screenshot, and announce a game all based around the single screenshot. You just can’t do that. It’ll never work, and I did it. 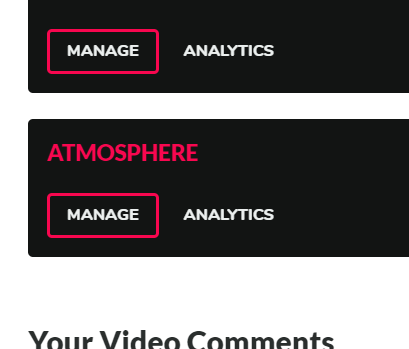 I never moved past that stage. After 3 years, I have never moved past the “create a beautiful environment, snap a picture of it, and put it up online to get instant affection” stage. After beginning the project, some time passed and I kinda got bored of it, so I started working on different projects, all of them suffering from the “snap, forget” mentality.

Not too long after, that was all I cared about. I didn't care about making games. I only cared about making things look nice, taking pictures of those things, and putting them on the web. I did that for 3 years. Over and over.

If you're making games, indie ones at that, I just have one thing to tell you - you are not alone in this battle. Game development is hard. Extremely so. You're literally creating things out of pure air, and trying to make sense of it, trying to make it have some continuity, make it all work. And believe me, I know, it's very easy to lose motivation when you see all of the cool stuff on Twitter, but you have to stop comparing yourself to other people. You can't try to equate a professional's work, who has had 20 years of experience, to yours.

Moreover, games are just that - games. One big mistake I made in Atmosphere was trying to ground and anchor everything. "Why didn't they send sentient machines to the planets?", "Why do people walk, wouldn't teleportation be invented by then?". Remind yourself - it's a game. Not everything has to make sense. Your story can have loopholes. That's the point - it's your story.

If you've been torturing yourself over a project - just drop it. It might seem hard, but it's what you have to do. You're destroying yourself mentally, and you simply can't waste time doing that. Making games is hard, but it shouldn't affect your life.

I can’t feel but have let my fans down. Reading their comments about how much they wanted to play Atmosphere has always broken my heart, because deep down I always knew, they'd never be able to. But this is a necessary step for me. It's for the better of my health. I can't keep doing this. It's practically torture. Every time I was doing something fun, I thought "I should be working on Atmosphere." Every time I saw something even remotely sci-fi related, I kept Atmosphere at the forefront. It has to stop.

But I still love game development. I still love putting things together, and see it materialize into something beautiful. It melts my heart to create something with your own hands. Game development is amazing, and I would never want to abandon it. I learnt soo much making Atmosphere. I learned an insane amount about how things work. To say that Atmosphere was a complete waste of time would be false, but to say that I lost more than I gained would be a statement that I'd largely agree on.

What's going to happen in the future? I can't say. I might be dumb and resurrect Atmosphere after a few years (scold me if I do), but I now know for a fact, that feature creep is much more dangerous than just the digital form. It can creep into your mental wellbeing too.

As Davey Wreden puts it: "Time to do something with my life"

As I’m writing this, I’m tearing up. Not because I’m sad, but because a rock has been lifted from my heart. It’s hard to state how big of an impact Atmosphere made on my life. It ruined the past 3 years for me, and I’ll never let that happen again. Life is too short for non-sense like this.

It’s over, and I’m the happiest I've ever been..