How we approached non-partisan politics in Interrogation

Our thoughts on politics in games and how we integrated that design philosophy into Interrogation
Andrei Dan Olaru
Blogger
December 02, 2019

"I like my games to be fun, why spoil that with politics?"

It really seems that there's an overwhelming sentiment in the largest part of the gaming community that games should not be "political”, a term that means as many things as there are people that use it, a catch-all derogatory term. A dangerous sentiment that has prompted a rhetorical banishment of all politics from games, a new age of seemingly apolitical blockbusters. Even many clearly-political games that come out scramble to call themselves “apolitical”.

That is most likely the case because it’s really easy to execute ‘politics’ badly in art and media, and in video games especially. It’s easy to lose nuance as you’re busy bashing the politician or ideology you hate, and it’s easy to lose credibility as your political ideals bleed into the work in idealized forms. As our society gains more and more access to networks and information, most true, some fake, a lot of it framed, the natural outcome is a sort of ideological tribalism. Each example of bad execution functions as further proof for those advocating that games must remain pure fun. 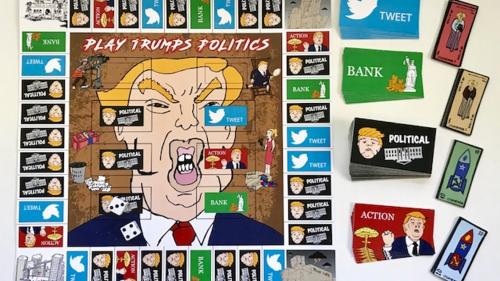 But new media, we feel, can also be part of this ailment’s cure. Politics does not mean partisanship. We’ve been trying to build an example, bring our little contribution toward betterment, through fun and engaging experiences. For the past few years, we have been diligently toiling away, crafting what we believe to be a smart, challenging, video game experience: “Interrogation: You will be deceived”. In it, you play the role of a lead detective, tasked with bringing down an emerging extremist group, the Liberation Front, that threatens the peace and stability of your city. You do this by carefully using your team’s resources, maintaining your reputation and credibility, managing and tasking your agents, and most importantly, sitting down and questioning potential terrorists, working your way through intricate conversational puzzles to extract confessions.

For example, when you sit down and talk to our suspects, you will notice a small tape recorder on the table. Faced with unresponsiveness and evasive answers, there’s nothing stopping you from pressing the “Stop” button on that recording, and employing more violent means of persuasion. This decision, and the responsibility for its consequences, rests solely on your, the player’s, shoulders.

This is one of the sensitive topics “Interrogation: You will be deceived” covers. As you progress through the game, encountering and discussing with the radicalized members of the Liberation Front, you have to tackle heavy topics such as police brutality, government corruption, anarchy, political ideology and more.

So why, you may ask, did we choose to approach these subjects, and how could they ever be “fun” in a video game?

Whether we realize it or not, and as much as video games executives and marketers try to convince us otherwise, all games are political, as they shape thoughts and opinions that shape behavior, society and ultimately even state policies. Each game is nothing but a cultural droplet, their effects compounding over years. Are you using guns in your game to solve a problem? That’s a political statement right there. Fighting to bring down the demonic authoritarian overlord in your game? You liberal! Are you lining up your pockets by building a sprawling industrial enterprise in your game? Long live the free market!

The reason why the political messages contained in many popular games are not causing any pushback is because they are either obfuscated through normalization over decades of genre history (ex: free market pro-trade economy dynamics in tycoon games) or because they are tactful and realistic explorations of a topic and not transparent and blunt examples of partisanship.

The interplay between games as cultural products and politics is inescapable, since politics is the medium we grow up in, the environment in which we live our day to day lives. This is hidden even in the word’s etymology: “politics” comes from ancient Greek and it can refer to anything that has to do with affairs that concern the population at large. Beyond voting or activism, where and what we buy, how we dress, what we eat, these simple things are influenced by politics, and through the web of these small actions we each write our personal political “manifesto”. We might not use the established political science-y vocabulary to describe our actions, but that doesn’t matter. The political reality is so integral, we feel it would be an affront to the intelligence of the players if we would not approach these subjects in a serious way in “Interrogation”. Grounding our characters’ visions of the world breathes life into them, making them feel like proper human beings, with more depth than common video game tropes would allow us otherwise. This is very important for us, since these suspects must, after all, deceive you, and it’s easier for them to do so if they make sense, being coherent and cohesive. They might be wrong, but they can justify themselves convincingly.

Let’s say you have to interrogate Bobby, as the evidence to convict him of burglary is circumstantial and insufficient for prosecution, so you need a confession. All you know about Bobby is that he’s a young, unemployed man, with not much formal education to speak of. How you, the player, looks at Bobby, is entirely dependant on your own political view of the world. You might blame him for his situation, or you might excuse his criminal behaviour due to his harsh circumstances. Perhaps you might believe that he’s a danger to societal peace, or that he needs support from the community. Or you might believe all these things at the same time! When writing our dialogues that approach these sensitive topics, we give you the option to express these views, and also to phrase them in different ways, as you see fit. By engaging Bobby to look with you at the issue from different angles, you get to understand his situation, what might have driven him to steal. This conversation feels more natural than an artificial and dry questioning line of where-were-you-at-5-PM, and you leave this exchange a little bit smarter, your horizons broadened, considering one more perspective.

Flexing your intellectual muscles by wrestling with ideological topics is also entertaining. We often feel a sense of accomplishment when we grasp a new skill or add an interesting tidbit to our knowledge pool, and we tried to make “Interrogation” tick exactly those boxes. As you play our game, your exposure to various topics gives you the mental toolbox required to guide the suspects towards a confession: you know just what to say to get under the skin of the anarcho-liberal, or exactly what phrase will piss of the syndicalist. But it’s not just our characters that can spit out politically charged opinions! The player has the ability to establish their own opinions, and attempt to persuade others to their vision. We’ve put self-expression, puzzle-solving, wondrous discovery through exploration, tool-mastery, the same entertainment-factors explored by games for decades, into an experience that tries to bring insight beyond the game’s fictional lore and mechanics.

Our vision at Critique Gaming is that games have the ability to make the world a better place in small ways, that could accumulate to significant impact. No matter where you look, it seems that “political division” is the name of the game. Bridging that gap is a matter of understanding other points of view, and you can only do that by engaging in perhaps uncomfortable conversations, jumping into mental terra incognita, where we lack the comforts of our cognitive biases treatet as axioms, or the safety net of our close social circle. Games, as the newest, most complex and singularly interactive form of entertainment media, are cultural products that can go a long way in offering intellectual enrichment. We’re here to help that happen.