How to showcase a VR game at PAX

A couple of weeks ago at PAX East, tinyBuild announced our first signed VR game, an utterly ridiculous (and thus, well matched for tinyBuild) title called Stage Presence, in which the player must use their microphone and the power of their voice to keep a crowd entertained.

Alex has already written about the best ways to showcase your games at PAX, but he purposely left out showcasing VR games, because as we discovered, VR games are a whole other kettle of fish (that's British for "oh my goodness, help.") As the producer on Stage Presence, it was down to me to get the game set up and showcased properly for the event.

Showcasing Stage Presence was by far one of the most brilliant experiences I've ever had at a show, and was definitely worth the additional effort it took to set it all up -- but that effort was costly, especially compared to our other games. I thought it would be useful if I went through some of the issues we came up against, so that other devs hopefully can traverse them more easily.

1. Make sure your hardware is up to the challenge

Rather naively, I was under the impression that the fairly newish hardware we had been using at previous PAXes would run a VR game with the latest VR hardware. I was very much mistaken.

I was using the wonderful Oculus CV1 to show off Stage Presence (if you haven't tried one of these things yet, make sure you do, it's pretty incredible) and as it turns out, the CV1 requires rather beefy hardware to work.

Our main problem was that we showcase most of our games on laptops, and as you may be aware, only a handful of laptops can actually run the latest VR hardware. I’d imagine this is going to be a big potential problem for a lot of people reading this too. 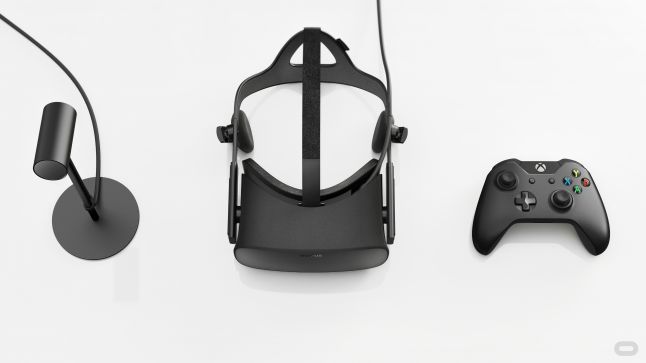 Fortunately I had a friend (who has now been upgraded to "a very good friend indeed") who was willing to offer me his super beefy setup for the entire weekend. But this rig was a beast, and definitely not the kind of hardware that we'll easily be able to cart around to other shows.

And this is the first point: Even if you do have the hardware needed to run your VR game at a show, you need to have a think about whether you're actually going to be able to get that hardware there in the first place.

On my part, it was dumb luck that saved me. Make sure you're not an idiot like me, and you've actually planned for this, especially if you’re planning to use laptops. Does the hardware you plan to lug over to PAX even support the latest VR hardware?

2. Think about the space

As Alex mentioned in his blog post, we like to make sure that all our games are outward facing at shows, so people walking by can see the game in action and hopefully stop to watch it being played.

With Stage Presence, we needed to take this train of thought one step further. This was a game that we knew people would want to watch -- it was literally people singing, rapping and screaming dumb things into a microphone, so we wanted to build on that and make it a spectacle.

With this in mind, we bought a microphone stand and a noise-cancelling microphone, and set them up facing the monitor. We also set up a webcam above the monitor which would periodically take shots of people playing the game, attempting to capture notable movement. 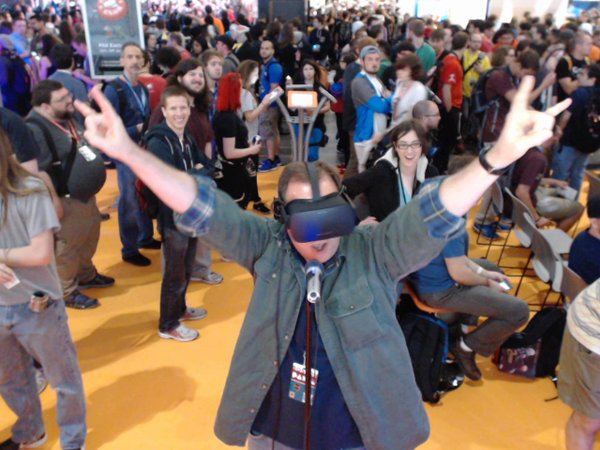 But the biggest (accidental) decision was with the sound output. Originally we had it set up so that the sound from the game and the player feedback (when someone finishes playing, the game plays their own horrible voice back to them to embarrass them greatly) came through the headset.

However, at the start of the second day of PAX I accidentally set the sound to funnel out through a loud speaker we had, rather than the headset, and it turned out this was a much better idea. The noise from the hall was so loud that it was difficult to hear the sound from the headset anyway, and now with the sound coming through the speaker, everyone watching the game could get a much better idea of what was actually happening. 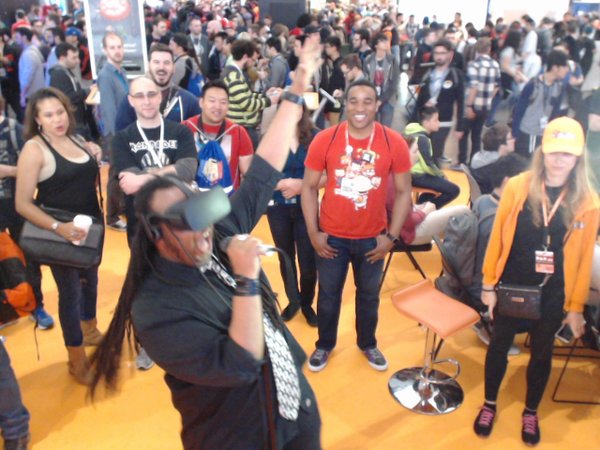 We went from people watching with interest on day one, to people crowding around the game and laughing, and even people regularly running over from other booths around ours to check out what on earth was happening.

What I'm saying is, I'm sure your VR game is great as an isolated experience for one person at a time, but when showing the game at an event, think about how you can pull as many people into the experience at once. If the people watching your game can also come away with a great impression thanks to the way you present it, then you're laughing.

3. Knowing how to "sell" your game is more important than ever

You know how it works -- when you're showing your game to people at an event like PAX, you need to work out how best to sell it to people. You work out a few sentences that you think sell the game well, and then you tailor those sentences over the course of hours and days, based on how people respond.

With VR, this is even more important, because you're not just selling a game to them -- you're selling an experience. I know I know, maybe you just threw up in your mouth a little, and I'm more than aware how super lame that sounded, but having talked hundreds of people through Stage Presence over the course of three days, I'm happy to stick by those words.

When someone puts on that headset, you have the power to transport them somewhere else. I quickly realized that I could essentially use my voice to become part of the story of Stage Presence. I'd put the headset on them, and while the game was reloading for them, I'd explain the game's scenario to them as if we were actually there:

"So listen: You're in a rock band. You're on stage. You're playing the gig of your life, and it's all going fantastic."

"And then all of a sudden... it's not going so fantastic anymore."

"So what I'm gonna need you to do, is use this microphone in front of you --"
*I take their hand and put it on the microphone*
"-- to keep that crowd happy for a minute while the guys behind you fix the equipment. You can do anything you like into that microphone - sing, rap, talk, shout, scream - but if you do nothing, they *will* throw bottles of piss at you. GO."

I quickly realized that the better I sold this story to the person playing, the more they were immersed in the idea. Many people appeared to completely forget they were even at PAX, and suddenly began belting out songs and sermons.

It was pretty extraordinary to see, thanks in great part to a bit of storytelling. If you're showing a VR game, don't just plop the headset on someone and tell them to play -- sell them on the world they are entering, and try to fully immerse them in it.

4. If you're planning to show the game in any additional spaces, you might have problems

By "additional spaces" I mean in selected slots on live stages, as part of deals with other booths, etc.

After fiddling around with runtimes and installations on the machines that Twitch uses to stream the games from PAX, I realized I'd made a terrible mistake -- the machines are in the back room, and the only way to get the CV1 working on the stage itself would be using a HDMI extender, due to the distance between the stage and the back room.

Unfortunately, as you might expect, this simply refused to work, no matter how much fiddling I did. Eventually I ended up taking the hardware we were using in the booth, lugging that over to the Twitch stage, and setting it up directly behind me on the stage. However this meant that, when it came to the actual announce slot, I only had around 5 minutes before our segment began to plop it down and make sure it was working.

Our segment ended up getting delayed for several minutes while I fiddled around in a panicked state, and Jon from Twitch tried to calm me down. It felt pretty unprofessional, and I just remember a flurry of me saying “sorry” and “it’s going to work, I promise” over and over before being flung into the livestream.

Wonderfully, when we actually went live it all worked like a charm, and I became the first person to show a VR game on the Twitch stage! But I can't imagine many more people are going to want to go through the trauma that I did.

Hence, we decided not to show the game with VR at the Alienware booth as previously planned, due to the setup woes we'd just experienced. I'd suggest if you're thinking about showing your VR game around, you make sure it's centralized to one place, and doesn't need carting off anywhere.

Showing a VR game at PAX was wonderful, and I haven’t laughed so hard in a very long time. Hopefully if you’re planning to do the same, you can use some of this advice to bypass the hurdles, and get to the fun bit far more quickly than I did.