How to make people play your game during a convention

Tips and tricks to help people play your game, have a smooth experience and leave your booth with a smile.
Giada Zavarise
Blogger
June 12, 2019

So you are exhibiting your game at a convention.
Perhaps you are looking to see how players react; perhaps you just want to build some awareness ahead of the game’s release.
Regardless of your motivations, you are here to make people play your game. And to reach your goal, you have to make sure your game is easy to access.

This doesn't mean the game itself should be easy! It means players need to be able to start playing and get what the game is about within seconds.
If you fail to do this, people will get frustrated and leave your stand after a few minutes. Not only they will not play, but they will hate your work without even playing it!

I have attended multiple conventions both as a journalist and as a developer, and have compiled a series of good practices you should follow if you want people to play your whole demo and leave your booth with a smile.

I know what you're thinking. "But Giada, taping pieces of paper to my booth looks unprofessional!"
No, it looks nice because it helps people play your game. And cheap paper instructions can be easily altered and replaced on the spot, so you can tweak them based on players feedback.

Once you have a reliable set of instructions, you might want to hardcode them in your build, or print them on a solid piece of cardboard to reuse during conventions. On the other hand, I think hand-written instructions can look very charming, because they show how much you, the developer, personally care about your players.
You bad handwriting is valid.

New players must be able to immediately restart your game without having to fiddle with the controls. Make your game reset to the menu screen after a few minutes of inactivity, or tape instructions like "press F12 to restart!" to your booth.

If I don’t see instructions, my first instinct as a player is to press ESC to open the menu. If ESC doesn't work... I'll probably end up playing another game instead.

If your game is dubbed, add subtitles to your game, and turn them on by default. Convention floors are busy, and players will struggle to hear the audio even with headphones on. Non-native speakers and people with auditory processing issues will struggle even more.
I'm an ESL developer, and nothing turns me off more than starting a game and be greeted by an Important Looking Cutscene I can't understand. It's as if the game is saying "this is not for you".
Don't alienate your players.

I know subtitles are is a pain. I know. If you really can't sub your whole game, at least add sub the tutorial messages.

Conventions are attended by all kind of people. Not everyone will know that WASD is the default control scheme for moving around, or that ESC usually opens the main menu.
Want people to play your game? Then teach them your control scheme!

You don’t have to bore players with endless tutorials: simply tape a piece of paper with instructions to your booth.
I’ve also seen developers adding stickers to the keyboards and pads to indicate which keys to press. This is an excellent solution, but make sure you're using the right kind of sharpies or everything will become a smudged mess.

Do this ESPECIALLY if you're exhibiting a VR game. VR is a new, costly technology, and different headsets have different control schemes. Don’t assume people will know how to use your VR equipment.

My teammate Chiara exhibiting Selling Sunlight at a convention. Look how she RADIATES ENERGY.

Be a good host

Standing near your booth to gather feedback and invite people to play is a good practice, but your presence risks turning off players if you don't behave properly.
The two main rules to follow are always ask and never excuse yourself.

Always ask means "ask players if they want to listen to you before telling them a thing".

If someone is staring at your booth, greet them and ask them "do you want to play?" or "do you want me to tell you what this game is about?"
Don't pressure people to play your game. I know you're excited about your game, but you will only look creepy and weird.

If a player gets stuck, don't tell them the solution. Instead, simply ask them "do you need a hint?"
I know watching players get stuck is anxiety-inducing: you fear they will get frustrated and simply stop playing. But observing how and why players get stuck is vital for learning how to improve your experience.

Never excuse yourself means "never reply to players in a self-demeaning way."

99% of the times, the demo you're exhibiting won't be your final build. The difference between your rough build and the polished game inside your head will make you cringe. Still, restrain yourself from saying stuff like "this part will look better in the final release", or  "this feature is not implemented yet, but in the final game you will be able to do X".
Don't say it. Double NOPE if you are interrupting people while they're playing just to say it.
I swear people don't care. They are here to play your game in your current form, and that's it.

Once a player stops playing, they will have feedback. Sometimes, they will bring up problems you are already aware of.
Again, avoid answers like "yes I know, I will fix it in the final release". You'll sound dismissive. Just thank them for their feedback.

I know most of us devs are awkward nerds, and all this social etiquette is tiring and confusing.
If talking to players doesn't come naturally to you, just stay silent. Don't push yourself.
Being silent is better than being remembered negatively.

Since many players, too, will be awkward nerds, sometimes you should just leave your booth alone and go take a break. Just go. Get some coffee. We all know you're tired anyway.
Some players find speaking with developers intimidating. Others find difficult to play if they know they're being watched.
Leave them space to play.

Help people find your game after the convention

I lost count of the games I wanted to cover or buy, but couldn’t, because the author didn’t even have a website.

People will play lots of interesting games during a convention. Help them remember yours!
You don’t have to print a million of business cards, but at least prepare a Steam page, or a mailing list, or a Twitter account. Whatever. Something that allows people to follow your game, and that allows you to follow up, sending them updates and reminding them that your game still exists, is cool and they should definitely buy it once it comes out.

Again, avoid pressuring people.
One of the most uncomfortable experiences I've had at a convention was a booth where the developer sat to a chair next to me and watched me play the whole game. At the end of the demo, a screen encouraged me to get added to a mailing list.
I did not like the game. I just wanted to leave. But the developer asked me to leave the mail and just kept staring at me, looking expectant and slightly desperate.
I left a fake mail and quickly left.
Don't be that developer. 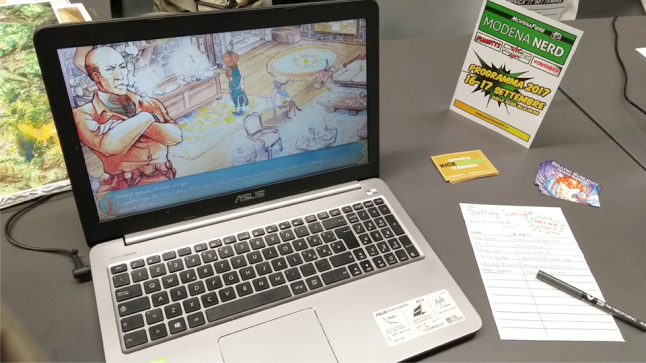 A physical sign-up form can be less intimidating than a screen, but be prepared to deal with A LOT of scribly handwritings.

Journalists are people too

Remember that some people playing your game will be part of The Press.
Journalists have a million games to cover, and can't afford to lose time googling your game and downloading images from some old devlog.
Be respectful of their time. Give them all the materials they need in an easily accessible form.
Get your press kit ready (you can use Presskit()). If you really, really don't have the time to set up one, at least prepare a .zip with screens and a game description you can mail to journalists on the spot. The press can’t cover your game if they don’t have screens to put on the articles.
Be nice to The Press. They are very tired.

A trend I noticed: the games that constantly disregard accessibility practices are often the most "artistic", experimental ones.
This makes me sad.

Weird, cool and experimental games have the highest chances of attracting people who don’t usually play games. But if we make them inaccessible, we’re just cutting people out.

Don't be dismissive of people who don't know to play games: they might become your new, most ardent fans.