How to cut food from your indie game budget:

What if you could lower your "stay alive" budget and instead use those extra dollars to make your game even better? In 2015, there may be more options than you think, read a synopsis of the experience before you dive in.
Dylan Jones
Blogger
February 09, 2015

Remember the future utopia of the 1950’s? The future where hunger is solved with pills and powder? Simply press a button for a nutritious, cheap, and delicious meal! With the arrival of 2015, I wanted to believe this utopia had arrived too. I wanted to test my body and report back if it was possible for others to cut one of the core pillars of any budget…food.

They’re off to somewhere that isn’t the grocery store.

Most likely, you’ve said to yourself “if only I had more time today”. What if there was? As a game developer, creating a new studio and starting a co-working space for indie game devs in San Francisco, there’s never enough time in the day or enough padding in the wallet. I planned to save the time I would spend shopping, preparing, and eating a meal. In addition, I hoped that the piggy bank might gain some weight. The below is a high level telling of the half month journey to that “utopia” without food.

How would I stop eating food without an early death? While any version of this plan could be regarded as crazy, the sanest approach involved a new mystery powder called Soylent (yes like the green). Instead of a solution for world hunger, Soylent has attracted its recent VC millions by being a “meal substitute”, unfortunately targeting a demographic that currently seems to consist of brogrammers. None the less, such a bold product promise appealed to me.

Perhaps questionably, I had been looking forward to such an idea for a while, and joined the line for a taste. A whopping nine months later, my powder arrived. The silver lining is that the wait coincided with the launch of Soylent version 1.1. Almost like open source software, Soylent has an entire community dedicated to perfecting the formula for long-term use. A brave few have reported that they had been “on the mix” for months, living off adjusted variations of the substance long term. It’s not a bad plan considering Soylent is only ~40 dollars USD a week. While some may say they could cook at home for close to that, that’s an incredible deal in the most expensive city in America. In addition, this cost isn't for ramen noodles, it was supposed to provide everything my body could ever need. In fact, it promised to be an even healthier diet than what I was already eating! I decided that I would quit cold turkey (for lack of a better phrase) and any kind of food or non-water drink for two weeks. If you’re enticed by such a possibility, or are considering the lifestyle, make sure to note these warnings. 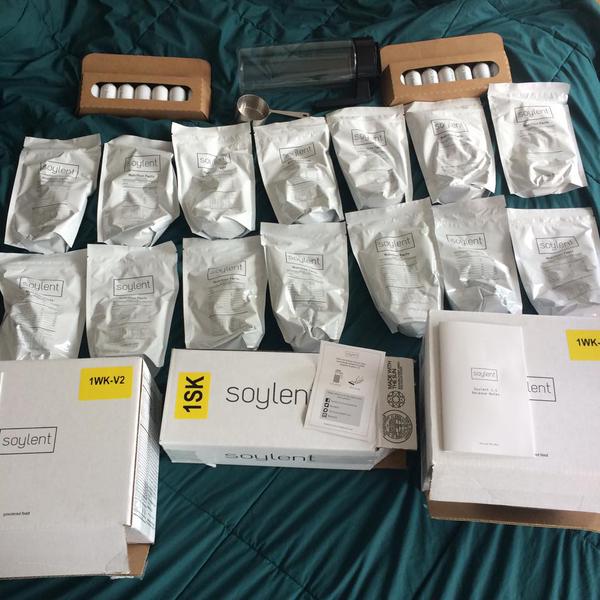 Starting today, I won't be eating any food (or drinks) for 2 weeks. Trying @soylent v2, I will report back. pic.twitter.com/upO9q13Cj3

My first impression was one of awe. I was struck with just how easy this meal preparation was going to be for the next two weeks. Rip bag open, pour into provided container, shake, pour into cup, drink, have it all day. The taste was bland, chalk-like, neutral -yet also approachable. My second impression was not as positive. This new convenience came at the price of headaches, and I was unable to shake that tired feeling (I only very rarely drink coffee, so cutting liquids was not a factor in this). I was exhausted much earlier in the day. By the second morning, I thought my health was trending up. However, a sensation of cold chills (in my consistently heated apartment) started to sneak in. This was not ideal.

Before I cover the rest, let me address the most asked question when I explain this experiment at parties. “What’s bathroom time like?” Soylent has earned (watch out, slight TMI ahead) a reputation for a rather “potent” type of flatulent. In better news, I’m happy to report that in version 1.1, I didn’t experience anything beyond what one would label as normal. I’ll spare readers further detail, but if you’re one of those who are curious to what one might expect during sit down time, I’ll leave it at ‘less frequent and lighter in pallet’. Let’s move on.

As I crossed another day from my calendar, marking the third day of only drinking my food, I started to get nervous. Along with the headaches and the cold, my teeth started to hurt. I could feel my jaw longing for the days when it was used to chew. Chewing gum can sometimes be recommended, but it either satisfies your jaw or only teases which makes the feeling worse. With or without gum, my teeth we’re about to have bigger issues. I kept all my life schedules and habits such as brushing / flossing teeth consistent, so it was a surprise when my gums started to bleed for no reason. If you decide to try this, make special note of the following pro-tip. It turns out Soylent and other food substitutes have built-in chemical reactions to help the solution digest in your stomach. Unfortunately, this process starts in your mouth, and thus these reactions can make your gums bleed. It was only three days in and I was seriously considering calling off the experiment for my health. Such concern even comes across in the photos of the days below. But for better or worse, I always try to embrace commitment and with the constant interest from my peers, I pressed on. In addition, I vowed to brush my teeth three times a day, after every “meal”, which at least instilled some good over the top hygiene habits.

On day four, I allowed myself to rekindle a love affair with flavor from what seemed like a past life. For science, I went to a small Unity event, which revolved around whisky tasting. Just so you have some background information, I measure up to be a well above six feet tall, below my average BMI and am no stranger to an extra round of drinks. But after two tiny glasses of whisky, I was utterly destroyed. It may be of little surprise, but after not eating real substance for a week and sipping a few whiskeys, I was more than a little drunk. Heed my warning from the future, the utopia of powdered food will either make us all cheap drunks or discourage any decent partying. On day 5, pictured above at the Double Fine co-working space, you can see what a hangover looks like. To my fortune, I found that I bounced back and started to feel much better later in the day, and the days to follow without food. For the first time, come almost a week in, the entire experience was looking up. Past volunteer soylent test subjects have noted that the first transitional week is the hardest. I began to think the storm was passing.

Come day 6, I was feeling much better. I picked up habits like sipping on the drink versus core meal times which would help me escape the feeling of hunger all day. I blended the tasteless powder with peanut butter, jelly, and chocolate. Keep in mind, no matter how much you think you like a flavor, you won’t like it after eating it all day. My body was miraculously adjusting to the earlier physical discomfort. This however, was when the mental battle started. You have no idea how engraved food is into our culture until you stop being able to eat it. Every conversation and advertisement cuts like a dagger in reminding you how badly you envy taste and texture. You start to miss flavor on a primal level. One can only rub their jaw so many times to try and appease the muscles you evolved to chew and survive. I enjoyed the saved time, but started to question its usefulness unless I used every minute of the day. While I tried to maximize all my time, I look back no longer underestimating how valuable zoning out after a long day with a television show can be. At the end of the day, the mental anguish from every angle is why I won’t recommend this food cleanse. While I had more time to work, I found myself much more easily distracted on every count. Perhaps this was another hurdle that would pass in time, but my calendar was almost filled with crosses. By day thirteen, I wrote in my log “I’m tired all the time, I take long unproductive naps sometimes more than once a day, and I think I’m less productive, I don’t want to do this again.”

Batches of Soylent are finally reaching the general public and game community, to decent appeal. I won’t recommend it as a lifestyle, but it might suit you as occasional snack on a busy morning. As I feel qualified to tell you, the utopia has yet to arrive.

For more game developer tips, consider my tweets @tDJ or find other dev wellness and game design posts over at theDylanJones.com/blog.