My latest indie game HEADLINER has been out for almost 3 months now. I wanted to share detailed statistics about sales, marketing, geography, platform and gameplay. I hope it's both interesting and informative to other indie game devs and gamers alike.
Jakub Kasztalski
Blogger
December 28, 2017

My latest indie game HEADLINER has been out for almost 3 months now. I wanted to share detailed statistics about sales, marketing, geography, platform and gameplay. I hope it's both interesting and informative to other indie game devs and gamers alike.

(This Article was originally posted on My DevBlog)

HEADLINER is a short, thought-provoking adventure about media-bias. Control national News and its impact on your career, society, and family. Multiple unique endings let you share your story and see what the Headliner before you did.

It launched on Steam on October 3rd, 2017 for $2.99, with initial discount bringing it down to $2.54. I participated only in the Autumn Steam sale, and no other promos or bundles. It is also available on IndieGala and through DropLeaf. HEADLINER currently has 99 "Very Positive" user reviews, was featured on GeekWire, and covered by several big YouTubers as well.

The Journey to Release

For context, let me lay out all the marketing efforts I put in. HEADLINER "officially" begun development on August 22, 2016, initially intended as a free web game on GameJolt. I also shared my progress on TigSource with numerous dev updates, even releasing my complete design doc (something I have never done before). Sadly, this failed to really gain any attention or following. As I observe the changing political climate in the U.S. and the prototype kept growing, I eventually decided to turn it into a more robust standalone release.

The first public exhibit of HEADLINER took place at iFest in Seattle on May 6th, 2017. It was a low-key event and I did not have a fancy setup, as you can see above.  The goal was to test the idea publicly and see if it had potential - and indeed, many gamers were intrigued. So development continued as I mined Facebook, Google and even local community stats to make it more relevant and relatable in the current social and political climate. Here's my previous devblog explaining exactly how I did it, if you're curious.

I decided to throw a little Pre-Launch Party on  August 28th, 2017 at a local Seattle bar. Most of the attendees were my friends, and a hashtag campaign we attempted didn't really go viral as we might have hoped. But it was a fun night that made me feel a bit more "legit", and resulted in some cool photos. 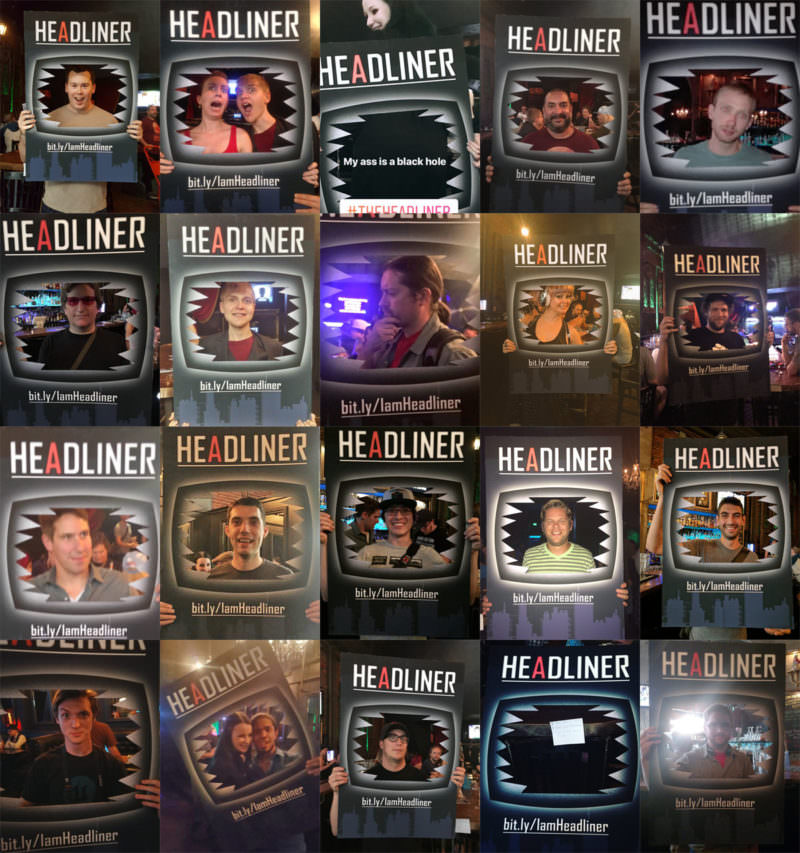 The next exhibit happened just a month before release, at the Seattle Indies Expo on September 3rd, 2017, conveniently located two blocks away from PAX.  The reception was, again, very positive and the space was packed. The connections I made would eventually lead to a great GeekWire feature as well as connecting with the Seattle Online Broadcaster Organization. I also re-used the Headliner engine to make a little free spin-off game called Mr. Molotov Man, which is exactly what it sounds like :P

Leading up to the release, I relied on Hashbang Games to help with the brunt of the outreach.  Aside from helping me with the Pre-Launch Party and numerous FB / Twitter posts, we've done a big media push to reach various journalists, YouTubers and Streamers. We primarily relied on Email and twitter. I've also distributed keys using KeyMailer, which mostly attracted smaller channels. I've also used the Steam's Curator Connect, but only 3 of the 25 codes I sent were redeemed, and I do not believe any of them have left a review.

The game finally released on October 3rd. Aside from the aforementioned GeekWire article, I also got covered by several bigger YouTubers such as Chilled Chaos, DLive or WeaselZone (more on that later). After release, I also exhibited at Geek Girl Con on November 21, 2017 and GE2 Live Expo on October 21-22, 2017. However, both of these events did not have a big gamer turnout and did not significantly impact sales or exposure. However, the networking I did got HEADLINER on Dropleaf soon after.

Now that you have an idea of all my marketing efforts, below are the fruits of my labors.

At the time of this writing, HEADLINER sold 3,193 units. The platform breakdown is as follows:

However, Mac and Linux ports were not available at launch, and came on Octobr 18th. Thus, if we adjust the sales from 18th onwards, we end up with 1,338 total sales broken as follows:

(Note: The Mac/Linux is smaller than total as some of those were testers before release of the ports).

Here's the sale graph over time:

As we can see, most of the sales happen within the first 1-2 weeks of release, and sharply trickle down after. Sales, such as the Autumn sale at the end of November, do a good job of temporarily boosting daily sales. Neither Geek Girl Con nor GE2 Live exhibits even register on the sales graphs, but they were good for other networking purposes (such as ending up on Dropleaf).

The biggest spike occurred when ChilledChaos, a big YouTuber, covered the game in two videos, totaling 150k and 100k views each. This more than doubled the sales for that day. There is another small spike just a few days later, likely thanks to DLive's coverage, which got 37k views.

I am estimating the YouTube Views-to-Sales conversion rate to be around 0.5%.

Naturally, that is specfic to HEADLINER and its genre. I'm curious how it compares to other games, particularly non-story-driven ones. I have not tracked Twitch streamers so I have no idea how how those compare. It'd be great to hear from other devs! 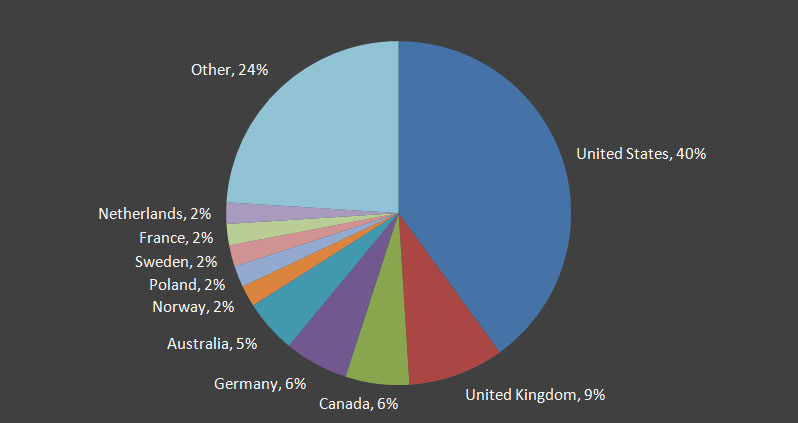 Unsurprisingly, US accounts for most of the sales (40%). UK takes the second spot (9%), while Canada and Germany are tied for third (6%). The rest is almost divided among Australia, Russia, and various European countries.

However, it is a stark contrast with my first game Postmortem: one must die released on August 15, 2013. Postmortem sold more in Western Europe than the US, with Russia being the third biggest market. 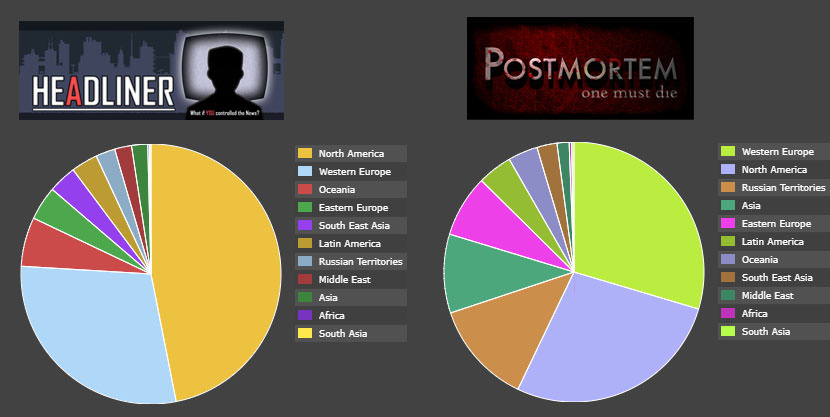 The change in HEADLINER's regional sales makes sense given I focused my world-building and marketing research on the U.S. and Europe, and most of my marketing efforts (such as exhibits at expos) were predominantly happening in the U.S. I guess the lesson here is, I did my research right :P

A month ago, I estimated about half of all the HEADLINER players obtained it illegally, and I found copies of the game on numerous warez sites. Here's a detailed dev blog I wrote about it: So 52.45% of People Playing my Indie Game Have Pirated it…

The initial spike is caused by the game's release, and seems to have lasted about a week before slowing down. There was a tiny bump during the autumn sale. It is hard to say how much the YouTuber coverage affected wishlists.

The Median Play Time of HEADLINER is about 58 minutes, which is a bit higher than I expected given a single playthru lasts about 30-45 minutes. The completion and replay stistics are also fairly encouraging: 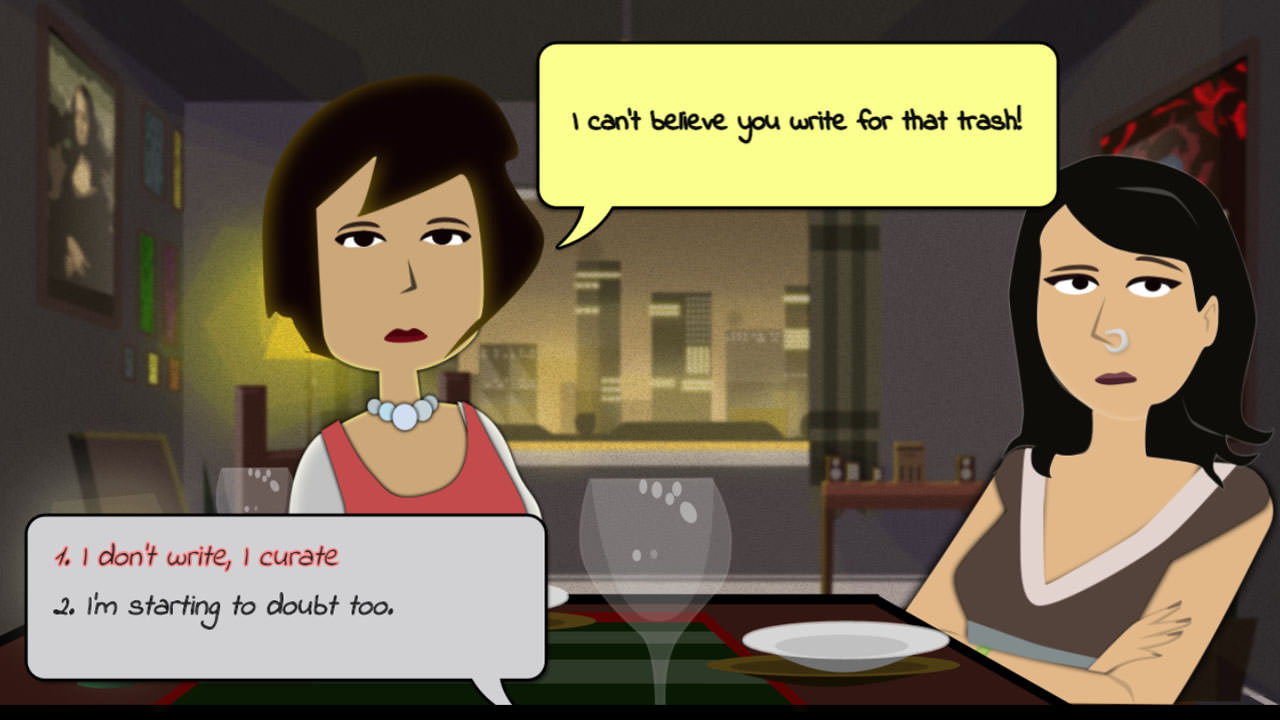 And here are the gameplay stats, if you're curious how your choices compared to others!

I hope these statistics are interesting and useful to other developers out there. What I personally found most interesting is the rather low rate of YouTuber conversions (0.5%), while at the same time noting they caused a noticeable bump in my sales. I'm curious how those figures compare to other games across different genres and demographics. It would be nice if other devs were willing to share more numbers.

Another thing that pleasantly surprised me was the high completion rate. HEADLINER is deliberately short to encourage replays, and I feel that 40% players beating the game twice is much more than I'd anticipate for a story-driven game.

If this post made you interested in HEADLINER, you can grab it on Steam for less than your daily frappucino. Thanks for reading! 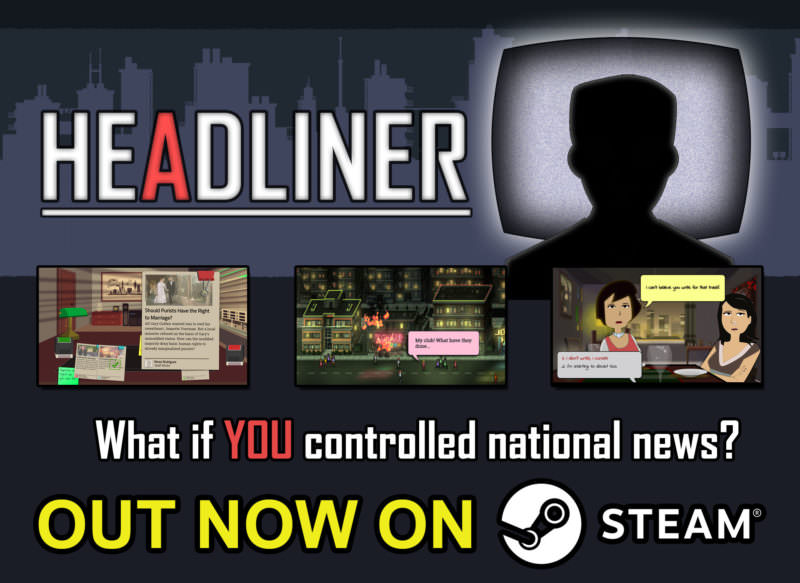 Hi! I am a Polish-American, Game Dev and web consultant. I founded Unbound Creations, focusing on story-rich and introspective games.  I published two commercial games before (“Postmortem: one must die” and “Karaski”), with HEADLNER being my third. My works have been a finalist at the Pixel Heaven Fest 2015 in Warsaw Poland, and on display at VALA Art Center in Redmond.

Check out my Blog for more nuggets of ill-advised wisdom!