Back in 2009 and 2010, it looked like Nintendo had solid control of its handheld market. New models like the DSi then DSi XL and had helped fill the gap when the DS Lite faltered. Regrettably, the 3DS XL and 2DS have done little to buoy the 3DS platform.X
Matt Matthews
Blogger
January 30, 2015

Occasionally I hear people say that Nintendo's doing fine, and that their handheld business is doing just fine. And, to the extent that it's making money, that's true. But what I don't see acknowledged is that Nintendo's handheld hardware market is contracting and has been doing so for over two years.

Here, just look at the figure I've put together below. It shows the stacked TTM console model shipments for Nintendo since the end of the first year of the Nintendo DS back in late 2005. 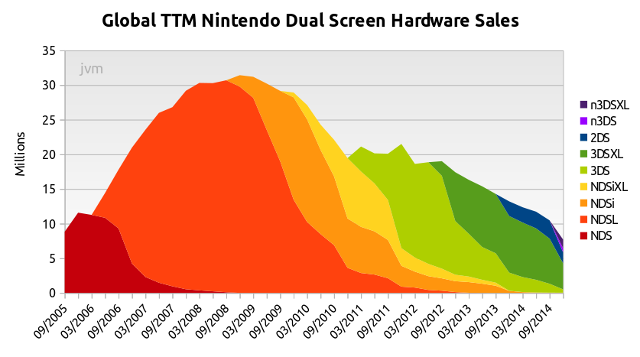 And now we have the New Nintendo 3DS models, which are primarily out in Japan and Australia but will hit the U.S. and Europe in the coming weeks. It is possible that sales will tick back up once those models are released worldwide, but the soft launch of the new model hasn't done much to help Nintendo's business.

As I said in my other recent blog post, I'm impressed with Nintendo's adoption of digital sales. They should be commended for that! However, the continued erosion of their active hardware base is a serious issue, and one they'll need to address directly.

[Matt Matthews has another Nintendo analysis, about the company's digital sales, live now on Gamasutra blogs.]