A small analysis I did for GameBeholder.com on the criticism of Japanese games, current trends and seeming absolute notion that japan needs to stop being japanese to succeed. Why do we have this idea so firmly set in our heads?
Bernardo Del Castillo
Blogger
March 30, 2012

So, lately I have been reading a lot about the future of games and consoles, and what the next generations have been leaning towards. To me, Videogames are probably some of the most innovative mediums in the world today, and it is frankly scary to see how blind, greedy and self-serving most sides have become.

The first thing that I've started fearing (and the topic of Chapter.1) is the direction of japanese games. There's a lot of bad rep going on about the Japanese style of making games. A lot of people who used to enjoy final fantasies, and other franchises, have grown distant to them, without even giving them much opportunity. Following with Final Fantasy, a lot of people criticize the last games, expressing how little they change, and how stale they have become, even though FFX, 12, and 13 are completely different. I don't know what is going on with the audience, but they seem to think that japanese games are too sappy, nerdy, childish and unoriginal. Even though they are willing to play Skyrim or Modern warfare 10 without a second thought. We are observing a really bizarre phenomenon, where people express their desire for different, but end up consuming the same.

Obviously, the developer side in Japan hasn't done very well either. They have begun reading the signs completely wrong. They see western games as simple epic cinematic experiences, and they see those making more money, so they try to adapt. We have seen the price of adaptation. FF13 feels like a completely vague and aimless long cutscene, Resident evil 5 has lost most of it's unsettling atmosphere, Silent Hill has gone down the "action" drain, and all-over we seem to be getting greatly disappointing adjournments. 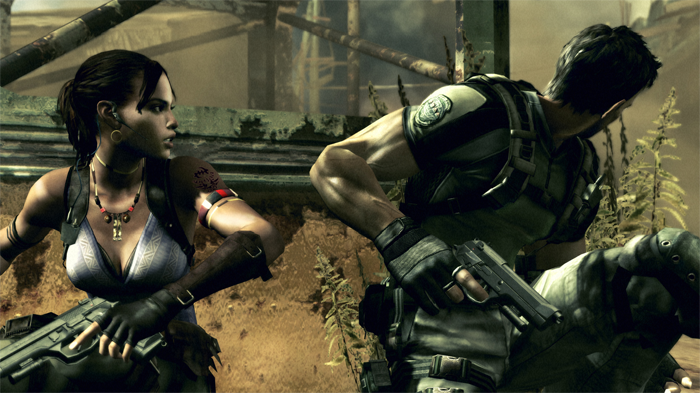 Chris! Marcus Phoenix wants to know why you aren't returning his phone-calls, why don't you hit the gym together as you used to?

These new spawns are weird, not quite functional crossovers of third person shooters and japanese sensibilities, that fail to engage in several different levels. Controls don't quite fit into the very polished western establishment, and narrative becomes an extremely disturbing merge of japanese quirkiness and western clichés,achieving various degrees of unintentional ridicule. Games like Binary Domain, Neverdead or Vanquish, are extreme examples of this lack of focus. We are also observing a wave of japanese IP being developed in the west... why? these are not harvesting very good results, and aren't really achieving a higher level of polish either.

And then Masachika Kawata, Capcom's producer say's that they need to gear Survival Horror towards action games to appeal to a bigger audience. Here someone is missing the point! It seems to make sense financially, since well bigger audience = more money. But does audience really work that way? Resident Evil lovers love the games because it has its own flavor. I have always considered RE one of my guilty pleasures, I like the scares, I like te tension, I like the slightly goofy plot. So why would I want this same components stripped away from the game I love?

I was personally much disappointed with the general feel of RE5, it was still a fun game, but the tension was completely missing, the story was muddier than usual, the weirdness was toned down. Do third person shooter fans love it? no, controls are awkward and sluggish and action is still too stiff comparing to other games. They dont follow the branching narrative of the characters or care about the narrative exposition much either. So who is supposed to enjoy this game?

Why wouldn't we want Xenoblade, The Last Story, or Pandora's tower, Nintendo? It's not that we dont like japanese games, its that there is a conception that all new japanese games are derivative, and not bringing the good ones doesn't really change our minds.

A dramatic situation is the case of Nier Gestalt and Nier Replicant. 2 different games published by Square Enix based on the same plot, with a few key differences, developed by different teams. In the west, we only got Nier Gestalt, because it was designed as western oriented, although to me it just looks more bland. Why are we getting products supposedly catered for us, in way we didn't ask? Baffling. 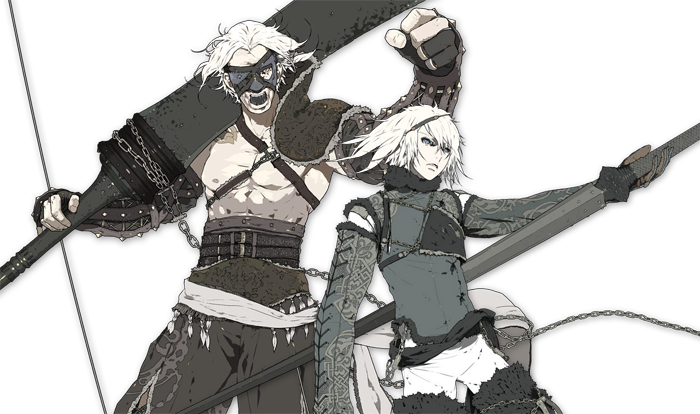 The 2 different flavors of lead character in nier, don't you mix your Asian and Western sensibilities! Or you might end up a little weird..

However, to say everything is bad, not at all. Nintendo is normally a shining beacon of integrity, as well as Nipon Ichi and Atlus, since they seem to have a great eye for innovation. Disgaea is the new base for strategy RPGs, and The Persona series keeps racking up praise for it's deep insight on character exploration, just to name a few.

To me, Daisuke Ishiwatari (creator of Guilty Gear and Blaz Blue), has a better idea. His focus is to create games that "can't be replicated". Because that is what we want in the end, find an audience that appreciates our game because it gives them things other games don't.Capture your audience with your true colors, value their interest in you, and they will love you back.
Well at least I hope thats the way it goes..

I'll see you around.