Gap between top-performing mobile games and the rest may have reached an all-time high, according to report by GameAnalytics

A report just released by Mobvista-owned GameAnalytics has found that, when it comes to the key performance metrics of successful mobile games, the difference between the haves and have-nots remains entrenched and in some cases continues to widen.

The report - Mobile Gaming Benchmarks - is the first global analysis of the key performance benchmarks widely used across the mobile gaming industry. Using data drawn from more than 40,000 games on the GameAnalytics platform which have been downloaded and played by 2 billion players, the report shines a light on a number of performance metrics for the top genres in the app stores.

“We set out to share the kind of data that is often discussed but rarely seen in the mobile games industry”, said GameAnalytics CEO, Jaco Els. ”The core aim of the report is to draw light on how certain KPIs have shifted over time, so that game developers of all sizes know where to focus their efforts most effectively. With these insights, they have the best chance of increasing their share of the predicted $110 billion market revenues in the coming year.”

The report examines the movement of important KPIs for game developers, giving insights into performance benchmarks for key metrics across the top 20 genres:

The top 5 genres on the app store account for almost 80% of the total games analyzed: action, arcade, simulation, puzzle & adventure. Whilst there has been some shift in the most popular genres in the past year, there is little overall change in the proportion of games that make up the different categories. 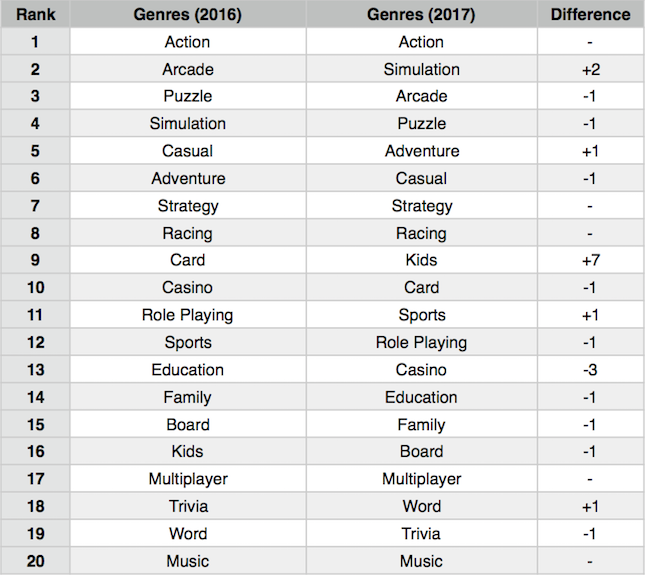 2. Player retention is low, but choosing the right genre makes a difference

Mobile games continue to see a huge drop in players after the initial download. Although there has been an accepted view across the industry that 15% of gamers continue to play a game after seven days, the report found that the average was in fact much lower, at 4%. Only the top 16% of games managed a day seven retention rate of more than 10%.

That said, there are some positives. Four gaming genres have up to a 2x better retention than most of the other genres on the app store: Casino, Word, Board and Card games. 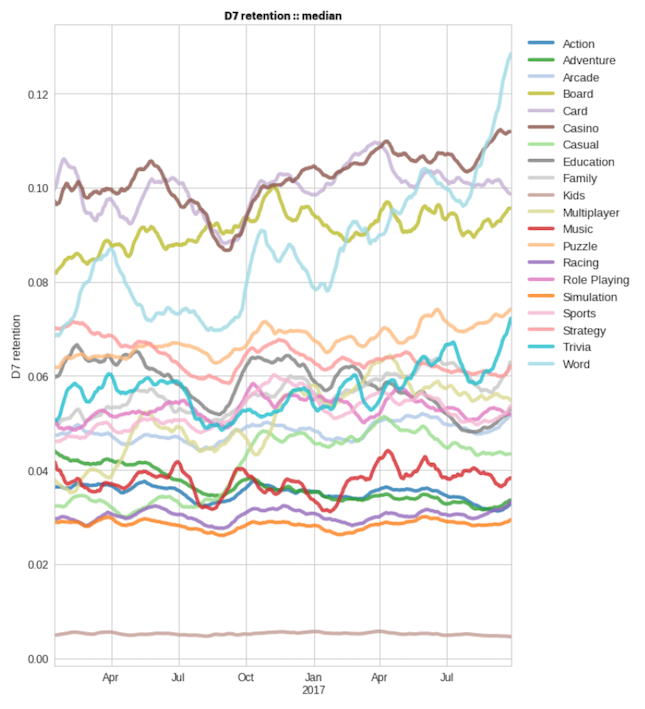 3. Average session length for the whole industry is 6 mins

Whilst the average gaming session length is approximately 6 mins, the top performing games often have double that.

4. The best developers are making more money than ever

The game genres with the highest ARPPU were Strategy, Racing and RPG. 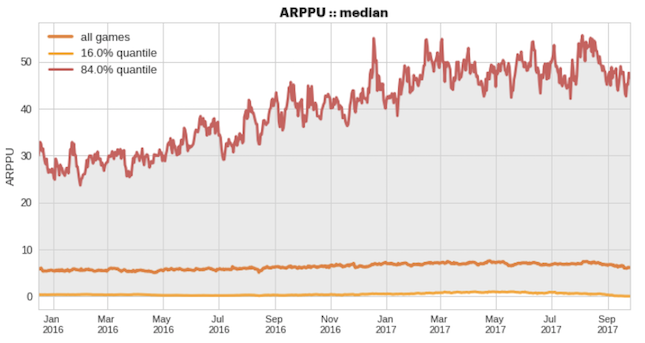 ARPPU shows the highest gap between high and low performers, with the top games at approximately $50 and the worst performing at just $1.

5. The best performing games are 2.5x stickier than the average

In terms of game genres, Casino, Card, Board and Word games are almost twice as sticky as others.

You can read or download a PDF of the Mobile Games Benchmark report at www.gameanalytics.com.

GameAnalytics is a leading player analytics platform, currently used by 40,000 game developers worldwide, with offices in London, Copenhagen and Beijing.