Gamification at Games for Health Europe 2012

Yesterday I was at the Games for Health Europe 2012 convention and returned with mixed feelings. Let’s take a look at a couple of presentations on gamification and healthcare.
Ruud Koorevaar
Blogger
November 07, 2012

Last week I was working on a post in which I was describing how it felt like the gamification landscape was changing. Gamification almost exploded into the awareness of many people about 1 to 2 years back as a practice which mostly involved badges, leaderboards and all that. But since then it has been settling down; the initial hyper enthousiasm is subsiding. This doesn’t mean that the value or appreciation of gamification is diminishing, it actually means that it is evolving. Gamification is growing up, I wanted to argue. However, earlier on this week I was at the Games for Health Europe 2012 convention and I returned home with rather mixed feelings. Let’s take a look at a couple of presentations on gamification and health.

Horst Streck‘s talk was centered around creating fun, or as he called it, the ‘f-word’. Streck realizes the pitfalls of using fun as a concept to work from, but he persists sticking to it as it is apparently easy to relate to. Gamification is about finding the game factor of an entity and creating pure fun with it according to Streck. An example he used was about young kids going to the dentist and brushing teeth, which is a chore at most for the average kid. Finding the game factor of visiting the dentist and brushing teeth then involves recognizing brushing, toothbrushes, scraping, drilling and the usual gunk as game elements to use to facilitate fun behavior. For example a sound device in a toothbrush to give entertaining audio feedback while brushing. Other examples he used to illustrate gamification was how we oftentimes engage in playful activities, like counting down before a red light to guess when it turns green or stepping over the cracks in tiles as you walk down a sidewalk. But with such examples of playful behavior you can only go so far.

You can argue that gamification requires more structure, as with a regular game, to create an engaging context, rather than nearly being entirely dependent on your own imagination. And this structure is created with game elements like the familiar badges, leaderboards, achievement, points and other more intricate stuff, Streck argues. However, as he nearly feverishly tries to convey that badges and the likes aren’t all that there is to gamification, he doesn’t mention any of the implied ‘intricate stuff’. This leaves me to wonder what he actually wanted to convey during his talk, besides using fun as a core component to design experiences, which is debatable, and that there is more to gamification than badges and similar stuff, without telling us what he actually means. In the end it felt like a presentation from 2011 and with a fast moving practice like gamification this is fairly killing.

Simon McCallum‘s talk (which I unfortunately missed the first part of) on the other hand felt a bit more considered. Rather than using fun as a core concept he used engagement, which circumvents a lot of the limitations fun implies. It also allows room for things as serious experiences. McCallum applied this to a more personalized approach with personalized and open-ended games. One interesting part of McCallum’s talk was about the challenge to convey the value of gamification to approach healthcare issues. Healthcare is tricky in that respect because it is heavily reliant on validation: there needs to be proof that something works before it can be applied. Getting this proof takes time, effort and money, which also became apparent in the following talk by Drs. Willem-Jan Renger and Tom van Wel.

Renger and van Wel talked about a little something they are working on called the ‘Moodbot’. This is a little virtual companion to aid the recovery process of patients suffering from psychosis and depression which lives in an appealing, personalized and tranquil environment. Patients can tell the Moodbot their mood through an interface and the Moodbot gives some form of feedback. At the same time caretakers can monitor the input by the patients and follow their progress. It has been in development for a while now as it is around its 6th iteration and soon will be enjoying an extensive playtest. But still, the question of if it would actually be used by patients and doctors kept ringing in the air, and it was met with a slight hesitance. The problem of validation was still there and it seemed like a huge obstacle. Howewer, I’m personally xcited about this particular project. A great deal of effort and preparation has gone into it already to ensure its quality. But due to the current focus being on the back-end, rather than the front-end, there is not much to show for it besides a bit of concept art by Meindert, game artist: 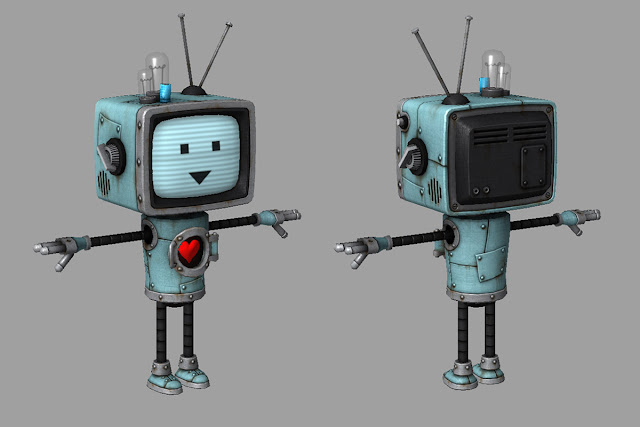 Like I mentioned in the intro, after these presentations and a couple of others I went home with mixed feelings. On the one hand there were signs that gamification was still trying to cling on to the familiar approach of using badges and the likes. There was a lack of a more forward focused vision to further explore the possibilities of gamification. However, on the other hand we did see more signs that gamification can offer more by not just looking for fun, but for engagement. On more practical terms, the Moodbot offered a great illustration on how new, creative initiatives can be undertaken to improve healthcare (which aren’t serious games). But before such a solution can be implemented in a sensitive field like healthcare the huge hurdle of validation needs to be overcome. Next year’s Games for Health Europe might be able to tell us more on that and hopefully it can also give us a fresher perspective on gamification and what it could mean for healthcare.