Let me tell you about the hidden 34 percent decline in GameStop's new software business, how it's affecting used software sales, and how the company will survive nonetheless.
Matt Matthews
Blogger
August 31, 2015

I'll admit, watching GameStop is a spectator sport for me. Despite all the negativity directed their way, consumers continue to buy at GameStop's stores and partake of the pre-owned product pipeline that fills the company's coffers. Pure digital consumers (like myself) have become a significant part of the video game industry, and yet the brick-and-mortar bruiser continues to flourish.

I'm reminded of Ash's words about the creature in Alien (1979): "I admire its purity. A survivor -- unclouded by conscience, remorse, or delusions of morality."

With some trepidation, then, I'll step out of my usual role of pointing out how GameStop continues to survive. Rather, I've noticed a troubling trend which I suspect will begin to put pressure on the company's core video game business in the next few years. This may not come to head this year, or even the next year, but it will begin to constrain GameStop's business model.

Years ago, showed a graph in which I showed what I estimated were GameStop's unit sales of both new and pre-owned (used) software. In that work, I was leveraging an interesting bit of data that GameStop publishes each year in its 10-K filing with the SEC. You see, the company has a habit of publishing the average prices for both new and used software for its business.

Doing this for used software is more tricky. Here, I've used a very crude estimation -- that 80% of the company's "Pre-owned and value product" segment revenue comes from used software. I don't know of any external way to verify this, but I think it is reasonable. As you'll see momentarily, the fraction I use is somewhat irrelevant to the trend we will observe.

Putting all these pieces together, here is an updated version of my estimates for GameStop's new and used software unit sales. 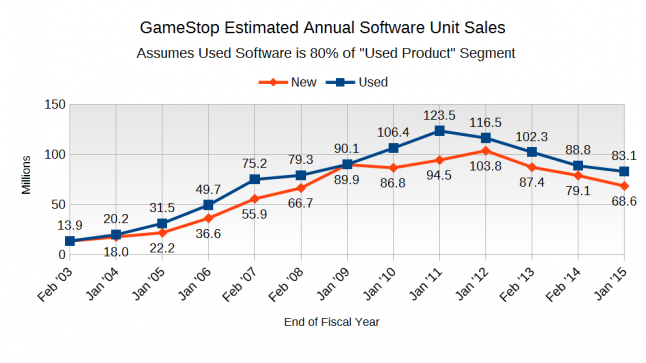 This is the big takeaway:


New software sales -- the fuel for GameStop's core used software business -- are already declining and have been doing so for the past three years.

While other reports might focus on the revenue or gross profit margins that GameStop reports, I think the unit sales are actually a more salient characteristic of the company's business.

For example, since GameStop's new software revenue peaked in 2012, that segment has declined in value by 24% in three years. That's a significant decline, mind you, but by taking the software pricing into account we see that the unit sales decline is a much more serious 34% in the same 3-year period. Because software revenues have been buoyed by higher unit prices, the failing health of new unit sales has largely gone under the radar.

GameStop can't afford for that to happen for very long, without doing something to mitigate the damage it will sustain to the high-margin used game business. Over the same time that new software unit sales have been declining, the company has diversified. It used to tout its digital sales business as a new segment, but that business is quickly taking a back seat to pre-owned mobile hardware sales and digital culture tchotchke sales like T-shirts, figurines, and keychains (from the newly acquired ThinkGeek).

Which brings me back to my rumination about GameStop as a survivor. They've shown themselves to be absolutely determined to survive, grab new markets as they arise, and turn a profit in the process. In spite of the shrinking market for brick-and-mortal sales of new physical software, they will continue to thrive.

For all of you betting on GameStop's eventual collapse, let me quote Ash more last time: "I can't lie to you about your chances, but... you have my sympathies."