Our first experience of going to a developer meet-up.
Sarah Wallace
Blogger
April 26, 2014 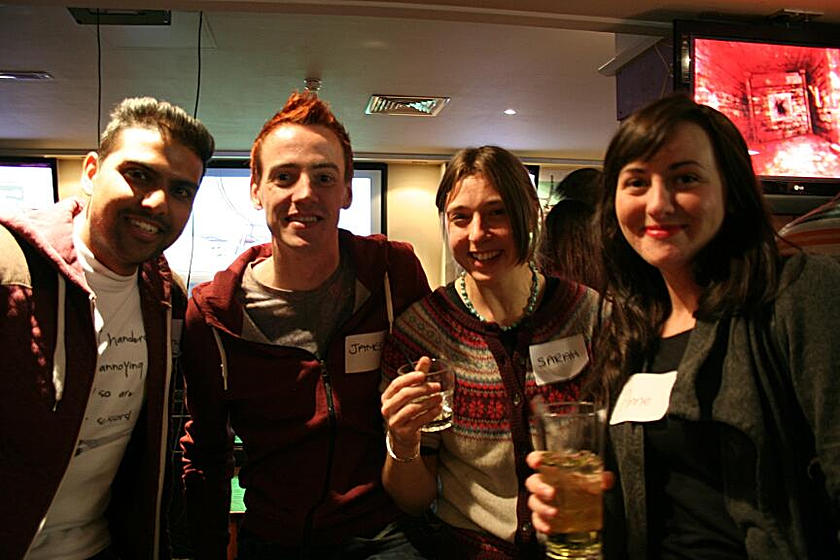 Lately we've been spending a lot of time on Twitter. This is an understatement, I'd say we pretty much eat, breathe and sleep this new-found social media platform (hearing that alert tone at 4am has now become quite a common occurrence). We opened our account at the beginning of March and, since none of our 'real-life' friends use Twitter, we had to start from scratch making new ones, slowly building up our modest list of followers. We weren't sure how we'd be received as a new indie team; it's a platform I've used before for my circus promotion but I was never convinced that it did me any good and it always felt like a bit of a chore. After a year of using Twitter to reach out to members of the circus community, I had a total of 80 followers. As soon as we created our Yesindiedee account I realised, this time, it was going to be different. After just one week of interacting with our new community we had matched and then surpassed the number of followers on my year-old circus account.

The indie community welcomed us with open arms and, even though its members are usually masked by avatars and we've never met them in real life, they feel like real friends. Shortly after opening our Twitter account we heard about #indiedevhour (which happens every Wednesday at 7-8pm GMT), which is an occasion for indie developers to 'meet' on Twitter and discuss their projects and experiences. We've found that it's just like being at a party with friends (a pretty wild one at times- it quickly gets difficult to keep up with all the conversations!) chatting about projects, aspirations and indie life in general. It can go off-topic. Last time I spent most of the hour discussing cupcakes. Last week we made it into a proper event and got in a load of pizzas and beer, tweeting a photo and inviting people to grab a drink. Even though people couldn't physically reach through their screens to take slice of pizza, they obliged jokingly and it made it feel even more like night-in, chatting with friends.

It's a great platform for making us feel like we're not the only ones out there struggling to make our own game. There are many people in the same boat and we wouldn't have found out about them without Twitter. There are even people closer than we imagined. Through Twitter we've managed to connect with indie developers in our local area and discovered that there are indie and game developer meet-ups right on our doorstep. We followed a few of the meet-up Twitter accounts and received a message almost straight away from a guy who runs a meet-up event in Leeds, called Ga-Ma-Yo. He invited us along to the next event, not only offering free tickets but also mentioning that there would be free drinks. Well, we certainly didn't want to be missing out on this opportunity! We accepted his invitation and he also kindly offered to list Yesindiedee as a local company on the Ga-Ma-Yo website. Things couldn't be better!

The event drew closer and we realised that we were actually going to meet people who do what we do in real-life. Thinking about that was exciting, but at the same time nerve-racking We'd only ever 'talked' to these people on Twitter. We began to wonder what they'd really be like, without the rose-tinted Twitter glasses. More worryingly, how would we be perceived? Would we live up to our online persona, whatever that may be? As I've only been working as an indie developer for two months, I began to get a little nervous. My industry experience was really limited; there was a high chance I'd unwittingly say something to make myself look stupid.

We bit the bullet and set off to Leeds last Thursday to meet some real-life developers, with no Twitter avatars to hide behind. We had no idea what to expect. Would there be a huge hall full of booths and people milling around testing out the latest games? Would there be a cavernous auditorium with speakers full of industry advice? Thus was highly unlikely as the event was being held in the sports bar, Shooters. But somehow, I couldn't picture it. Before heading to the bar we grabbed some food accompanied by wine to give us some dutch courage. Feeling a little more fearless, we Google-mapped (I'm sure this isn't a verb) our way to Shooters, imagining a big queue of people at its doors. Since it was already 7.30pm (the event began at 6.30pm- does fashionably late work here?), there was not a soul in sight. So we headed straight into the bar. At first we were met with locals, but soon spied a set of stairs which were closed off and manned by a woman in bright orange. We were at the right place and, after we'd been found on a rather large looking list, we were given larger stickers with our names on them. That would come in handy later when I instantly forgot everyone's name! We attached our stickers accordingly and headed up the stairs where all that awaited us would finally be revealed.

At the top of the stairs we reached another bar where there were lots of people casually chatting in small groups. At the far side of the room there was a large screen showing an interesting looking game, people on comfy leather sofas playing and spectating amiably. So we'd come to the right place, these were the right people. Now all we needed to do was meet them! It was an experience somewhat reminiscent of dating. Everyone was seemingly chatting and laughing with friends (even though most had probably just met each other) and we were going to have to infiltrate one of these groups and join a conversation, looking natural and confident. We sauntered over to the bar for some more dutch courage. We ordered two rum and cokes and proceeded to pay, to be told that the drinks were included on a tab. Ahhh I forgot about the free drinks! Great!

Drinks in hand, we decided our best bet to get chatting was on the other side of the room, by the gamers and the giant screen. We went over, hoping to have a go at the game ourselves and/or offer amusing comments to players which might spark a conversation. I could only describe the game as a '3rd-person, multi-player jelly baby brawl'. The objective was to smack your jelly baby resembling opponents off the edge of a 'boxing ring' of sorts (which was, at this point, a work platform hanging off the side of a very tall building). I know that sounds pretty crazy. It looked pretty crazy. Now and again a controller would become free and I almost went to play, but each time stopped myself thinking I'd probably become laughing stock.

We leaned on the sofas and surveyed the room, willing there to be some segue into a conversation. As if they'd heard our thoughts, a couple of people approached us, asking if we were indie developers. Anne and Sunny were from Goliath Gaming, a company that's developing a platform to help unite gamers and developers. We discovered that we had a lot in common, including the fact that we were both couples working together on our own projects. I'd run out of rum and coke a while ago, but that didn't seem to matter; talking to these guys was effortless. They were lovely people, we had a great laugh and they were really interested and full of positivity about our game.

Eventually, after a good chunk of the evening we headed to the bar for our next round. We decided to move to cider this time, although debated whether this was a sensible move. We decided that it was. Anne and Sunny had drifted away to chat to another circle of people and we noticed a group of friendly looking guys not far away, so strolled over with our drinks feeling much more confident. These guys were an extrovert and friendly bunch, working on a game for their final year masters project. We had a great time discussing the intricacies game music and sound-effect creation, something I'd been working on just last week. As we enthusiastically shared stories of pouring couscous into a bowl or tapping a pencil on a chair, I realised that I was, at last, meeting people who understood what my life has been like for the past couple of months. As nobody usually has the faintest idea of what I'm on about, this was unbelievably refreshing.

Time was flying and we couldn't believe that we were nearly at the end of the evening. We did a bit more circulating (with wine this time, not altogether sensible) before we left, chatting to a few more established companies before catching the last train back to Sheffield. On the way out, Andrew, the Ga-Ma-Yo organiser, called us over. He knew instantly knew who we were and the name of our game before we'd said a word, which we found extraordinarily impressive. We thanked him for facilitating such a great evening and he wished us good luck on our indie game development journey. We left, feeling great.

We really hope there'll be more Ga-ma-yo events in the future, as it was really encouraging meeting such a nice crowd. We now have a few more followers from the event, but it was really great to meet real people who understand what we do. Saying that, we still have a lot of love for our followers, even if we haven't met them. I'm sure we will some day!

If you're interested in going to one of the Ga-Ma-Yo events check out the website www.ga-ma-yo.com for future meet-ups in Yorkshire.