Frozen Cortex: The Art of the Concept

What’s It All About?

I’m tired of working on and talking about our game Frozen Cortex, which comes out this Thursday 19th February on Steam!  I’m sure many of you recognise the intense fatigue that comes with the end of a project: you feel like you’ve been repeating yourself for years.

Finishing a game is an unbelievably difficult task but that doesn’t matter any more at this point, because many thousands of people accomplish it every year.  If you’re going to put your heart and soul into something and exhaust yourself, what are the best ways to give yourself a good shot?

There is Only Concept

The most important thing about your game is its core concept.  I’ve said this before in various forms but it keeps being brought home to me in different ways.  I also think there’s some misunderstanding about what a concept is...

A concept is not “puzzle platformer”: that’s a genre.  A concept is not “a game where you float through trees on a magical umbrella”: that’s...something that there isn’t a good word for yet which exists between the visual aesthetic and the narrative.

A concept is the way your game is perceived by someone else.  It’s their first impressions, and how those impressions translate into an experience.

It’s primarily visual: something which it’s very hard to remember when you get into designing gameplay and systems.  If your game looks like Galaga but is actually a turn-based strategy game, people will just think it’s Galaga...unless you do something urgent and in-your-face to convince them otherwise, like the superbly pitched Mighty Tactical Shooter.

It’s also about who the player is, what they’re doing, and what that’s going to feel like for them.

If you see a picture of Darkest Dungeon and hear its name, you expect to be exploring a treacherous place and bashing monsters.  That idea is literally never going to disappear from gaming: if you believe even slightly in evolutionary psychology, it’s not hard to understand why.  On top of that is all the clever, modern stuff - the tech and the game design - which promises players a new adventure.

Obviously identifying these things in an existing successful title is easy but devising and executing them yourself is extremely difficult.  Naturally, you have to be motivated by your own creative desires.  However, if you put the right spin on things it can work.

The press and most gamers tend to relate to games experientially.  It doesn’t matter if your game has a cool animation system or great level design: if the package doesn’t add up to some kind of deeper experience, usually based around a feeling of efficacy or control, there’s no point.

With Frozen Cortex, during development, we found that we had a negative reaction to some elements of the concept.  Here are some false assumptions people made:

Just as Darkest Dungeon has confounded “yawn, more dungeons” by adding intriguing art elements and nice novel touches like the narrator, we tried to adapt around these preconceptions while still staying true to what we were doing.

The announcement focussed on the idea that your plans would be translated into exciting action: we thought that would be the most appealing thing to people.  The problem here is that we over-emphasised that, so the “sports” nature of the action overtook the cool decision-making and planning that make up the actual gameplay.

Contrast this with the most recent trailer we put out, which has been more popular so far and sparked more interest in the game:

Audience retention stats showed it was the actual gameplay, when it was in a clear linear sequence that enabled the player to get more of a “narrative” from it, was the most popular thing.

We know from our previous game Frozen Synapse that the idea of simultaneous turn-based gameplay, of making a plan which forces you to anticipate your opponent directly, is compelling: we just needed to put this in the right context for people.  Again, going back to the experience, players wanted to feel:

Changing scenes quickly, giving a sense of the depth of the game, also kept people’s attention, so trying to strike a balance between really keying someone into the actual game while also not boring them is the main challenge here.  You’re essentially trying to drive the concept home as much as possible.

I feel like we've done a lot to push the game to a strategy audience but it's still painful to see the frankly idiotic "why is this a sprots game lol" comments on everything.  You can't teach people to view your concept a certain way, you can only push for a specific inflection: in that respect I think we've done everything we can.

Pushing Towards the Audience

When we thought about how to get Cortex into the right places, we started trying to define its audience better.  We wanted to aim the game at strategy gamers who enjoyed having a lot of context to their games: the kind of people who play games like Crusader Kings or XCOM.

This played in well to a system our Lead Designer Ian called “players-as-loot”.  He wanted it to feel really rewarding when you won a match; giving you a low-level but interesting set of strategic decisions to make between matches. 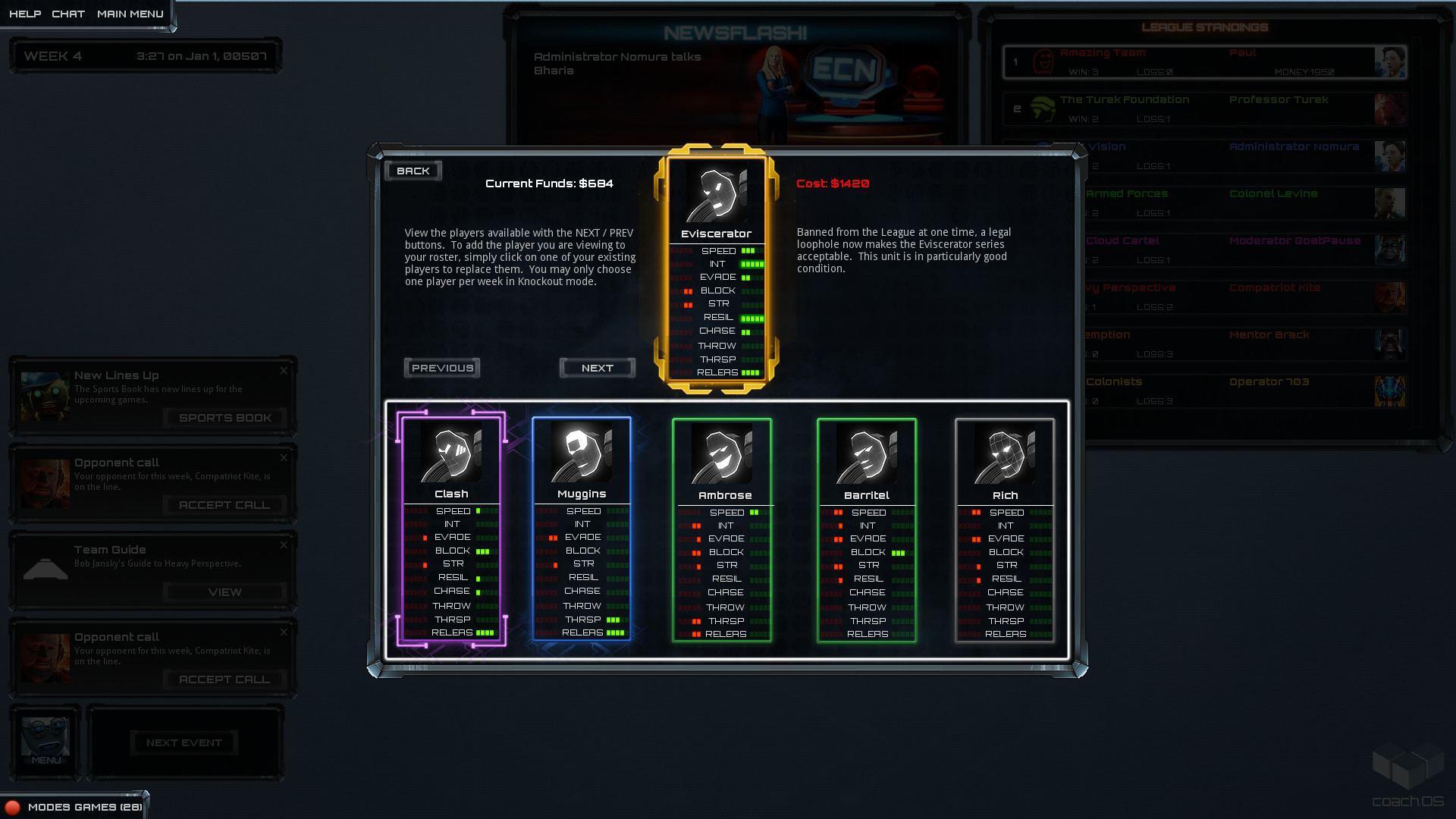 That led us to style our “player cards” like Diablo items or Hearthstone cards - each player has a unique bio and set of stats, with rarity being denoted by the different surrounds.  As soon as you see this screen, you feel like the game has more depth than just a simple positional tactical affair.

We also really wanted to bring the player into a world that felt compelling.  The 7 AI coaches all have their own dialogue and react dynamically to in-game events.  The narrative, which takes place across the two main single player modes, also fleshes out their backstories and interactions.

Adding this meta-game around the core gameplay took time, and balancing it was pretty challenging, especially given the randomly-generated nature of the playfield.  Eventually though, we were left with a flexible system that can be played either in a short-form Knockout mode, or in a more meandering League style: we felt our audience would want both.

This kind of decision making is also really nice for a literal audience.  It was massively encouraging to see YouTuber NorthernLion’s reactions to those parts of the game when he covered it recently:

Finding the audience doesn’t mean pandering to it, but it does mean trying to accentuate those elements of your game which are likely to hook people, both in the design and in the marketing.

Taking a concept and fleshing it out fully requires a lot of confidence in what you’re doing and also a commitment to add some quite large systems.  It’s important to not let that distract from what you are actually saying with the game, however.

Don’t Stop Talking About It

Many developers are far too quiet about their games: I’m certainly guilty of this.  Those who are really successful at promoting indie games use every opportunity, every PR point (no matter how niche or how mainstream) to hammer home what they’re working on.

We just put out a video focussing on the AI for the game:

This is definitely, partially, a niche interest but it’s also really fascinating to some people.  Right now Ian is busy debating the merits of his approach with other coders.  This kind of thing sparks interest: nothing is too dry or technical.

The awful marketing jargon “mindshare” might actually be useful in this context: it is so amazingly hard to get anyone to think about a newgame, especially on PC.  We are approaching a genuine saturation point, where journalists and YouTubers can’t cover everything that’s coming out and where some high-quality titles are being passed over.

Unless you’ve made a Darkest Dungeon, Five Nights at Freddy’s or Plague Inc, something which takes on a life of its own and creates a huge amount of fan content and interaction...you are going to be the primary source of any information or interest about your game.  This is where you have to attempt to put aside the fatigue and push to get other people excited in what you’ve done.

I would really like to see some more personality from indie developers out there.  There are many people doing interesting things who I have never heard from: the conversation is really dominated by a small number of teams and individuals.  Newer developers seem to say that nobody will be interested in them because they have no track record, whereas those of us who have been around for a bit longer feel like we’re being usurped by more interesting newer devs!  All of that is just pointless insecurity which benefits nobody.

PR is useful but advertising in a very targeted way, on Twitter and Reddit, has been somewhat useful.  This merits a fuller post later on, but I recomment reading Cliff Harris’ blogs on the subject.

(Sorry I’ve been watching too much Nathan Barley)

Here are the things I think, perhaps misguidedly, that I’ve learned from this: