Freemium games are not normal

Unlike the well known “normal distribution”, game player behavior appears to follow a power law distribution.  Recognizing this difference in underlying distributions is critical to avoiding poor forecasts and maximizing revenue.  This blog starts by an empirical discussion of how two key freemium game variables, time to purchase and revenue spend per user, are distributed.  We then briefly cover the differences between power law and normal distributions.  We end by discussing the implications for freemium game developers, both in the areas of game design and revenue maximization.

After analyzing several dozen freemium games, Sonamine discovered that the player behavior is better approximated by a power law rather than the more commonly known normal distribution.  For example, if you plot of the number of days since their first play against the probability of a user converting to paying status, you will get a graph that looks like this: 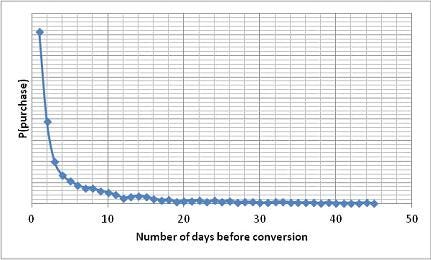 If this behavior followed a normal distribution, the distribution would look more like a usual bell curve. 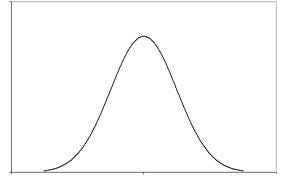 To make more sense of out this very skewed and lopsided distribution in real life, we can now plot the logarithm of each axis.  This is the resulting chart, which we will call the log plot of the probability distribution function. 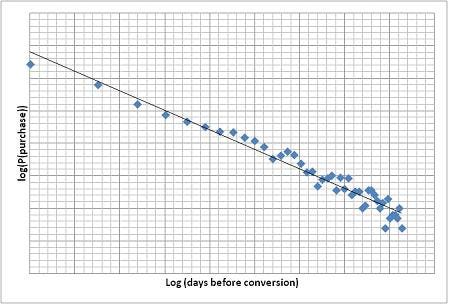 This pattern is a necessary but not sufficient characteristic of a power law.  For the technically minded, the slope on this log plot for this game was -1.5 (we revisit the importance of the slope in the next section).

The same pattern can be seen if you plot revenue from each user against the number of users who spent that amount, ie a frequency distribution of user spending.  A log plot shows how a power law distribution can fit the data much better than a normal distribution. 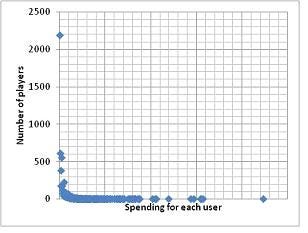 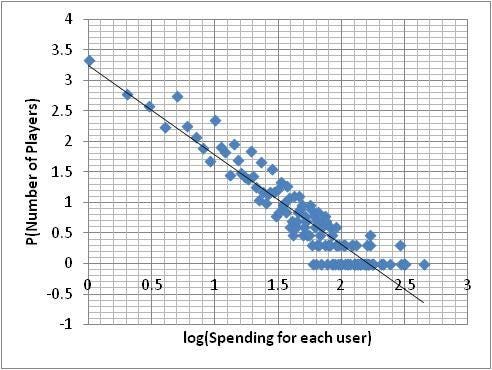 Again, for the technically minded, the slope for this game’s revenue log plot distribution was -1.45

How power distributions are different

Infinite mean and no upper bound  A normal distribution has a fixed “mean”, also commonly called the average.  For example, if the spending per player is normally distributed, then you can expect that most players will spend approximately the “average” of the normal distribution.  A power distribution, on the other hand, has INFINITE mean when the slope of the log plot is greater than -2.  In the case of spending per user, as shown in the real life game example above, the slope of the log plot is -1.45, so the “average” spend per user is INFINITE.  This is also sometimes termed the “no upward bound” phenomenon of power law distributions.

Extremely rare outliers contribute lion share  For a normal distribution, the outliers contribute only an extremely small percentage of the total cumulative sum.    Let us consider the example of the physical height of people, which is normally distributed.  If you randomly select 100 people and add up their heights, this sum total will not be greatly affected by an outlier giant who is 8 feet tall.  In fact, this outlier would contribute perhaps only 2% of the sum total of heights.  In a power law distribution, the reverse is true.  The outlier contributes a very large and disproportionate percentage of the sum total.   Combined with the no upper bound property above, this implies that the sum total of the power law distributed random variable does not converge.

No limits on player spending

Many game developers today assume there is a natural limit to the amount that players are willing to spend, ie a natural conclusion if spending is normally distributed.  As a result, they limit the maximum amount a player can spend either explicitly or by keeping prices within a tight but low range.

The key insight here is that developers should design the game with no limits to the amount a player can spend.  Practical strategies include continuing content packs, providing very expensive virtual items and removing explicit spend-limits in the game commerce system.

Do not slight the “elder” free players

The time it takes for a free player to convert follows a power law distribution.  The “heavier tail” property implies that, unlike normal distributions we are accustomed to, more players will be converting later in their play time.  Hence, developers should not “give up” on these elder free players.

Additionally, developers attempt to “monetize” their free players with in-game third-party ads.  The reasoning is that these “free loaders” are never going to convert, so we should get some advertising revenue from them.  A player must view 666 ads to generate $1 of ad revenue[1].  The heavy tail property implies that these “free loaders” are more likely to convert than previously thought.  As such it may be more prudent to improve the game experience by removing the in-game ads for these presumed “freeloaders”.

Because it is not uncommon for up to 50% of players to abandon the freemium game after one day, marketers and designers currently focus heavily on retention efforts of new players. The heavy tail property implies that marketers should spend equal efforts promoting to more experienced free players for conversion.  These experienced free players represent an additional source of revenue that is currently untapped.

Developers using Sonamine ConvertSoon to target this heavy tail with limited ads and first time conversion promotions have seen up to 10% more payers.

Maximize exposure to potential whales but beware the predictors of whales

Due to the disproportionate contribution that extremely rare outliers make to the overall revenue, game developers and vendors try to predict which player will be a “whale”.  The power law distribution, ironically, contributes to this desire.  Unfortunately, by definition the distribution indicates that these players are extremely rare.  This means there are not many of them for any particular game.  Trying to pinpoint these extremely rare players before they play the game can be compared to predicting the stock price of one company before it has started operations.

The more appropriate strategy is to expose the maximum number of spending opportunities to the player base in the hopes to catching these rare events.  In technical terms, developers should maximize the degrees of freedom within the game for spending money.  The degree of freedom is increased when you provide more varied and different ways and opportunities to spend money. Note that the no-spending-limit caveat should still apply.  This maximum exposure strategy is somewhat analogous to the investment strategy of buying an index fund instead of picking winning stocks.

Developers have been intuitively progressing along this strategy.  The key insight here is that it is more important to develop different ways to spend money, as opposed to more of the same ways to spend money.  As an extreme example, adding an option of paying for customized background music exposes the game to more potential high payers than adding more cosmetic virtual items to an existing virtual marketplace.

Limits of the linear forecast

Since the spending of each user follows a power law distribution, the sum total of the player spend, ie revenue, is greatly affected by extremely rare events, such as the über-whale.  The sum total of spending per user (revenue) is not stable, and does not follow a linear function.  Doubling the player base does not imply that the revenue will also double.  Revenue forecasts have their role but do not rely only on them.

If you have made it to the end of this blog post, congratulations.  Feel free to contact me with questions and feedback!