As a video game lawyer, one of the biggest mistakes I commonly see game developers make is waiting too long to trademark their game name or even not trademarking it at all. Here, I briefly explain in layman's terms the best reasons to do so.
Stephen McArthur
Blogger
September 17, 2015

Stephen McArthur is an attorney who focuses on legal issues in the video game industry. You can read more about his practice at www.smcarthurlaw.com

One of the biggest mistakes I commonly see video game developers make is waiting too long to trademark their game name or even not trademarking it at all. Platforms like Steam for PC, the App Store for iOS, and Google Play for Android have made it easier for small companies and independent developers to create and distribute video games. Thanks to these platforms, the video game market is open to virtually anyone with a computer to create and distribute their software. In 2014, close to 500 iOS and 250 Android games launched every day.[1]

However, as easy as it has become to create and distribute your own unique game, it is even easier for someone to copy your game and profit off of your hard work. This is evident from the numerous clones of popular video games like Flow Free, Threes, 2048, and Flappy Bird that crowd the market.

2048, itself a clone of Threes, could have at least prevented countless other clones from copying its name with a simple trademark registration.

Clone-creating developers do not increase the total user base of a game. Rather, these cloners cannibalize the market that you’ve worked so hard to build, diverting your revenue without adding anything new to the marketplace. It is more important now than ever to trademark your video game and protect your brand.

What is a Trademark?

A trademark is “a word, phrase, logo, or other graphic symbol used by a manufacturer or seller to distinguish its product or products from those of others.”[2] Trademarks can be a word like “Nintendo” or a slogan such as Sony's “Greatness Awaits.” 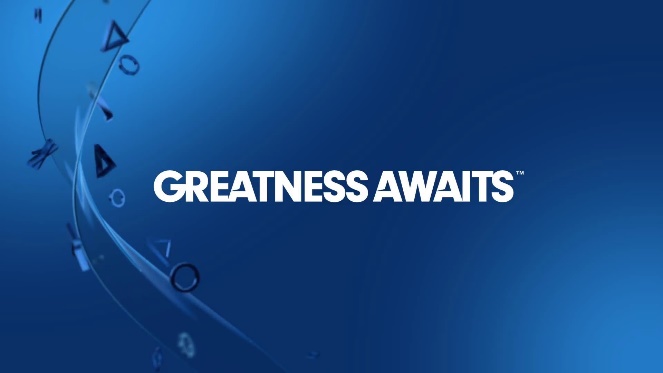 Trademarks are not limited to unique words like “Pokémon” or “Tetris.” Any English word can be trademarked. For instance, “Apple” is trademarked and protected for use on computers and software. “Flow” is trademarked for the “Flow Free” line of mobile games. Ultimately, the goal of trademarking is to protect the consumer by creating clear brand identification so they can easily identify the source of the products they are purchasing.

Do I Have to Actually “Register” a Trademark?

Technically, you can put a TM next to your game title without filing a trademark registration, but that will not give you anything close to all of the protection your company needs. You should always take the next step and register your trademark with the United States Patent and Trademark Office (USPTO). Then you can level up the TM into an ®. Having the ® symbol wards off copiers and cloners, gives you extra teeth to enforce your trademark in court, and makes it less likely that someone else will be able to use their own trademark to shut down your game.

When Should I Register a Trademark?

Right now. Ideally, you should file your trademark registration before the game is released. That way, your game has maximum protection against clones and other issues that may arise. In fact, you can trademark your game title up to three years before your game is even released. That means you can secure a game name as early in the development process as you want, locking the name up for years until you finally release your game. This is incredibly useful for avoiding the situation where you plan to use a game name for over a year, build your game around it, buy a website, and pour money into marketing and consumer awareness, only to have someone else beat you to the market with a game of the same name. If you didn’t register your trademark well ahead of time, you would be out of luck.

1. Prevent Problems Arising from Choosing a Game Title too Similar to Other Titles

When you hire an attorney to register your video game title as a trademark, the attorney will do a comprehensive search for any future problems that the chosen name may encounter. This search is essential for two reasons. First, it can save you from an expensive lawsuit after the game’s release when another company has issues with your game title. Second, it will prevent you from having to change your game title after release. A registered trademark establishes your right to the game title and can prevent other companies from forcing you to change it. Changing your game title after release will result in loss of customers, complications with search engine optimization, negative reviews, marketing issues, etc.

2. Exclusive Use of Your Game Title

Trademark registration protects you against people who will steal your game title and use it for their own video game. We could not imagine another video game called Angry Birds, right? Having a federally registered trademark for your video game title will prevent others from stealing it. In addition, only if you register your trademark will the U.S. Patent and Trademark Office reject other people from registering your game title as their own trademark.

The trademark of your game title not only protects the exact name, but it also protects anything that is “confusingly similar.” A trademark for “Flappy Bird” would stop copiers from using “Floppy Bird”, “Flappy B1rds”, and other similar titles. However, Flappy Bird was not trademarked on release. If its developer had registered a trademark of the game title, the Google Play store would not look like this: 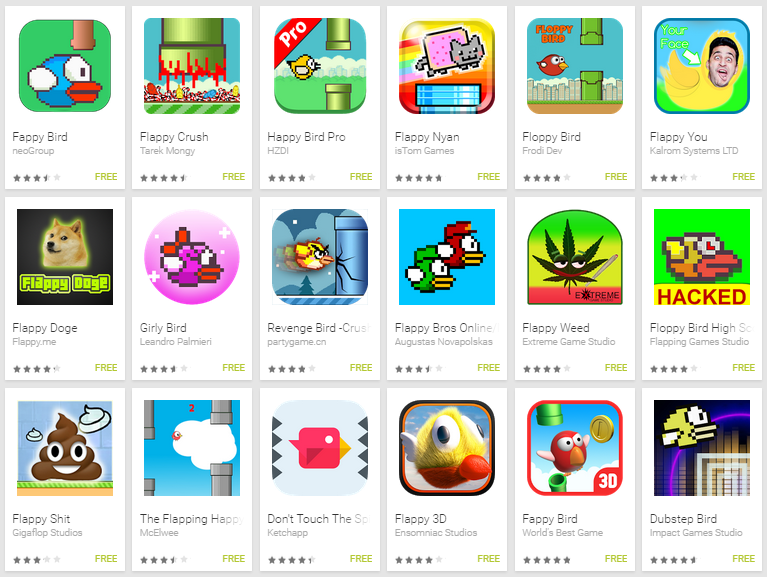 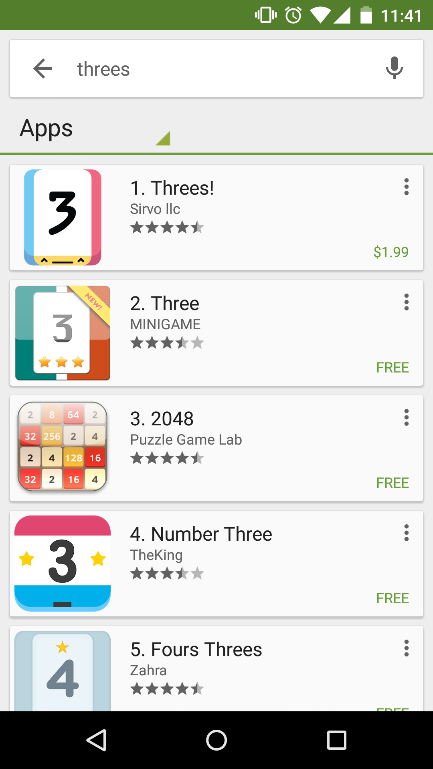 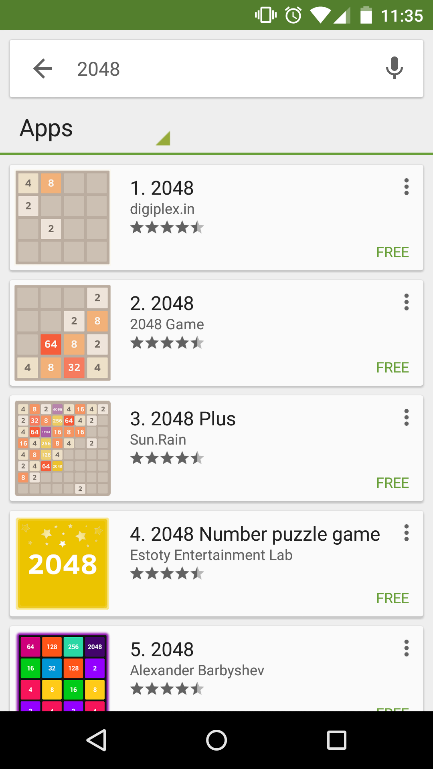 “Threes” and “2048” were not registered trademarks which has helped result in thousands of clones throughout Google Play and the iOS Store.

Registering your trademark early, ideally before release, can prevent others from dragging you into an expensive litigation. If, however, you are forced into court in a dispute over your video game title, having a registered trademark is a great advantage. If your game title is challenged as too similar to someone else’s, your registered trademark registration works in your favor by creating a presumption that your trademark is valid and that you have exclusive use to the mark. Your trademark also becomes incontestable after five years. And showing a valid registration increases the amount of damages you can request in an enforcement action.

Venture capitalists and huge game publishers know the value of intellectual property and are far more likely to invest in your company if you have jumped through the legal hoops to protect all of your IP. Furthermore, only if your game is trademarked will other companies approach you to license your game for related merchandise or to use in other media. Trademarks alone are a valuable asset that provide a competitive long-term advantage. Games like “Angry Birds”, for example, are able to license merchandise, board games, movies, etc. because they have registered their trademarks and copyrights.

Having a United States trademark registration allows you to file for trademark protection worldwide. Considering platforms like Steam, the App Store, and Google Play are available to consumers and competitors across the globe, this should not be underestimated.

How Much Will it Cost to Register My Trademark?

I recommend only using an attorney who specializes in trademark law and avoiding do-it-yourself services like LegalZoom. You wouldn’t hire a general practitioner doctor to perform open-heart surgery, or ever consider doing it yourself, and the same consideration holds true for intellectual property law. Filing the registration for your trademark usually costs about $1,000. That includes both the government filing fees and attorneys’ fees. You can register a trademark for your game title, the logo, your studio’s name, and any slogans you use to market your game. Considering the amount of protection a registered trademarks grants your video game, it is a valuable business investment. Angry Birds wouldn’t be a billion dollar brand if it had simply gone the way of Flappy Bird with its brand protection.

This article is for general information purposes and is not intended to be and should not be taken as legal advice.