SEARCH
A minimum of 3 characters are required to be typed in the search bar in order to perform a search.
Blogs
6 MIN READ
Blogs

Gaming on Smart TV no longer requires a console, so a new promising niche emerged. Game developers can find an untapped audience here, but there are five major obstacles to overcome.
Sergiy Mishchenko
Blogger
September 03, 2021 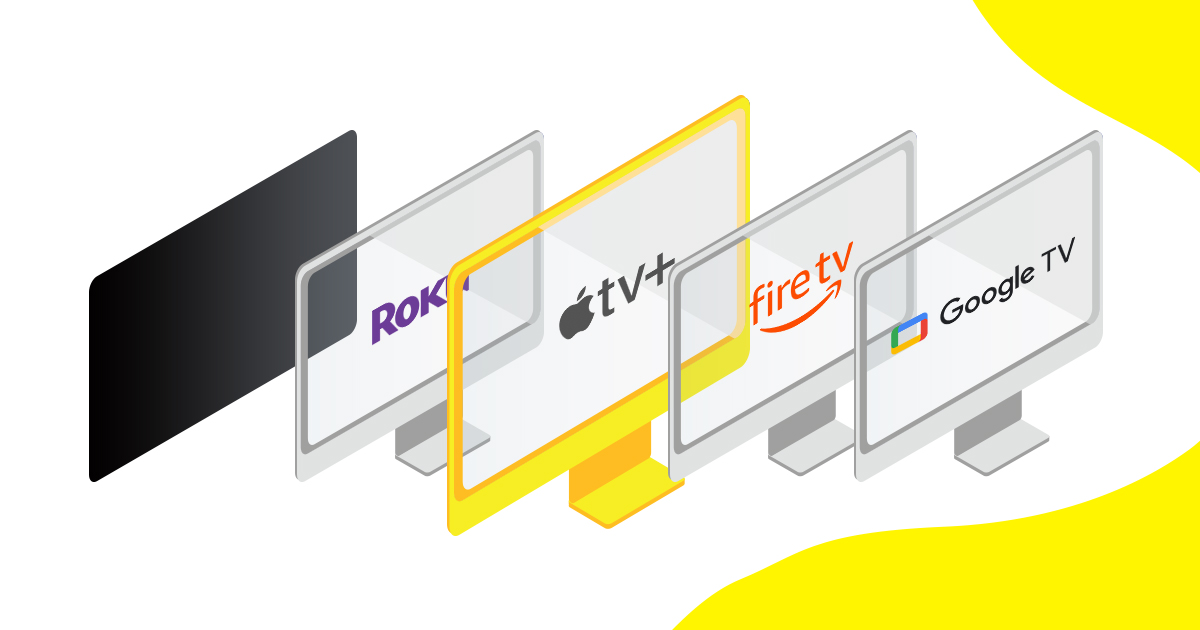 It is a rare occasion for a completely new gaming platform to enter the market – one that isn’t simply a new version of an existing model. But the emergence of powerful new streaming devices, combined with bored people in lockdown looking for entertainment, have created a new niche for games to thrive.

As things stand, very few companies are investing in this unexplored territory. The quality of games presented on Connected TVs (CTV) is currently very poor, with most developed unprofessionally. But pioneers brave enough to venture into this uncharted land have witnessed both impressive growth, as well as some unexpected obstacles to overcome.

I have compiled a list of the biggest challenges that fellow game developers would have to overcome when creating games for CTV. 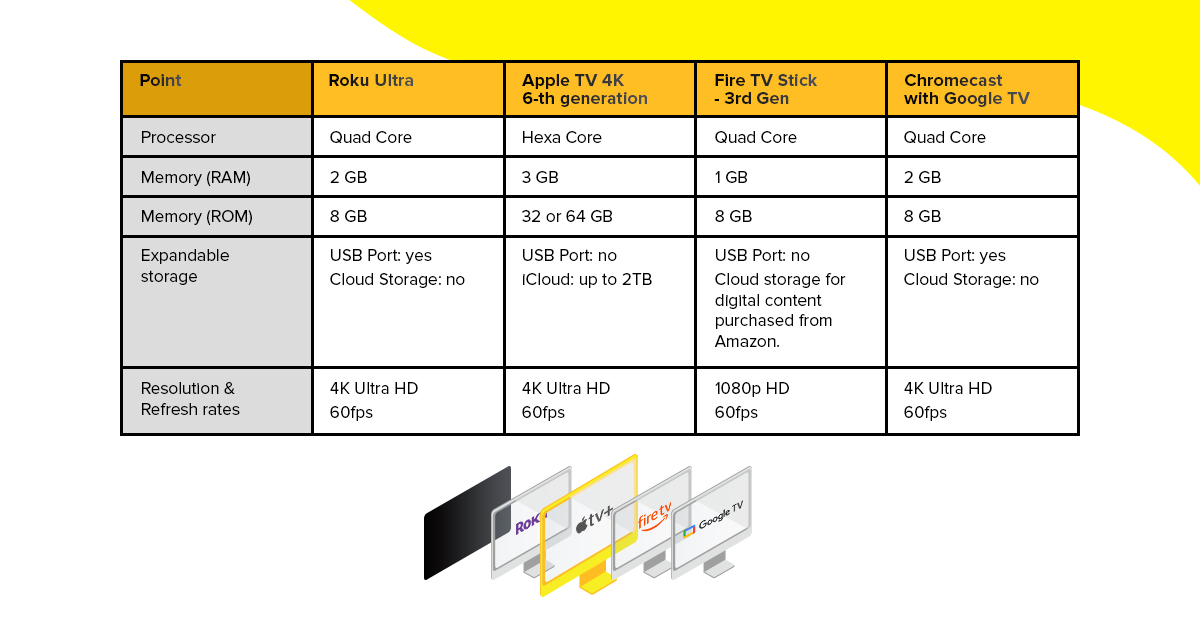 Diverse hardware poses a serious challenge as capabilities differ immensely. There are several big names in the CTV platform market, such as Apple TV, Google TV, Roku and Amazon Fire, each of them forcing specific limitations on developers to make games that would work on even the weakest hardware.

As an example, this results in users of Apple TV running a similar app to that of Amazon Fire TV, which only has 1GB of RAM and has the lowest resolution and refresh rates, while Apple TV enjoys 3 GB of RAM and is overall the most powerful device among competitors.

The only way to overcome this disparity and still release the product on multiple platforms is to seek the right balance between taking advantage of the capabilities of the most powerful device, while making sure their games still run on the less state-of-the-art hardware. 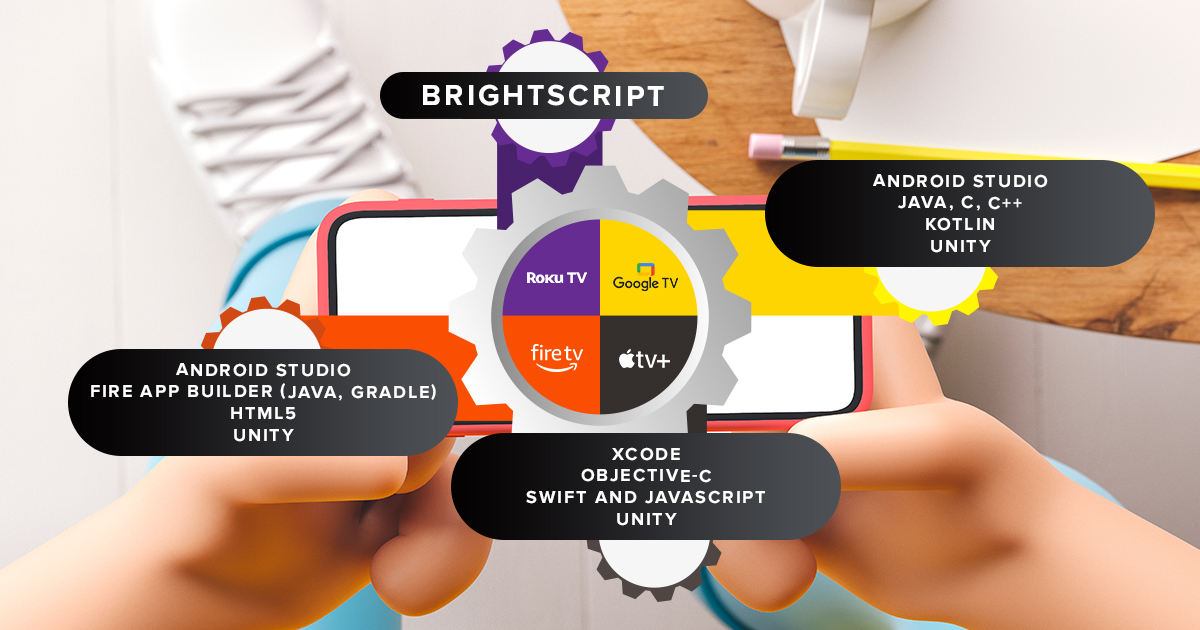 Different platforms work with different programming languages, which requires a range of experts to cover all of them.

To develop apps for Roku, you need to know Brightscript — a Roku-exclusive language. Compared to iOS and Android, the Brightscript community of developers is rather small. The good thing is that Brightscript in many ways is similar to Javascript. Therefore this pool of developers can be expanded by drawing in frontend developers familiar with JS.

For Amazon Fire TV apps, Amazon’s internal Fire App Builder is used. It provides a Java-based platform that helps create media streaming apps for the Amazon device. It’s relatively easy to use, although it requires interaction with third-party frameworks, such as GameMaker, Unity and Cocos2d-x.

In this regard, Apple TV and Google TV pose the fewest problems. The former requires the use of Xcode IDE for app development and languages including Swift, Objective-C, TVML, and JavaScript. Games are created using the same platforms and methods as in iOS. Besides, the third-party Unity framework can be used to develop tvOS games.

Applications for the latter are developed on IDE Android Studio using Kotlin, Java and C++ languages. Google TV apps have a structure identical to those on Android smartphones and tablets. This enables developers to adapt existing games for Google TV and take advantage of existing knowledge to easily pivot to creating new ones.

To address this fragmentation problem, companies have to invest into expanding its development team. To cover all potential needs, there should be a team proficient in Swift for creating Apple TV apps, Brightscript for Roku, JS for Amazon Android, and Unity, which is used for mobile apps and other platforms (with the exception of Roku). 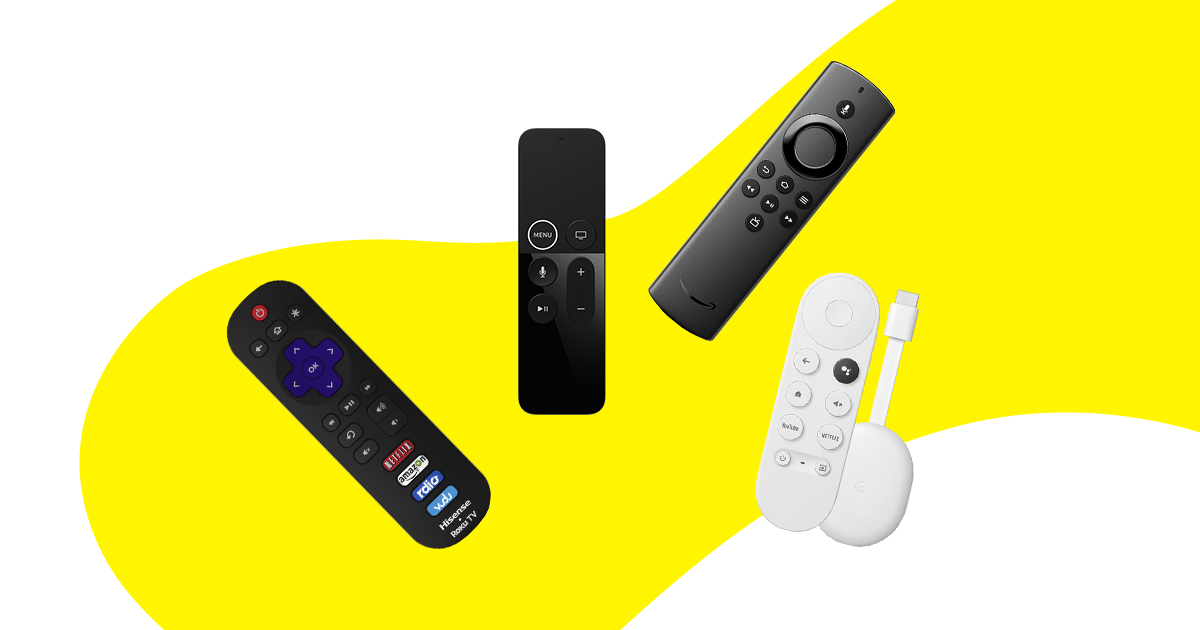 Remotes also vary among devices. Standard CTV controllers are rarely  designed with gaming in mind and thus are barely passable for this purpose. Moreover, some platforms don’t even ship their own remotes, with many end-users resorting to buying third-party controllers, often of varying quality.

Amazon Fire TV and Roku Ultra are the only devices shipped with remotes suitable for a wide range of games. Google TV and Apple TV, on the other hand, do not allow consumers to play games with their controllers, forcing them to buy third-party ones. Users can also buy third-party controllers for Amazon Fire TV — this platform wins in terms of versatility in this field.

Games on Roku are only compatible with its own remote. This works out fine for most games; besides, Roku game developers can customize the use of various buttons for different in-game actions.

Amazon Fire TV’s Alexa Voice Remote doesn’t support all games — the menu within the game will tell you which devices are compatible.

Interestingly, Apple TV games can only be played using the first generation native remote or a third-party controller.

In this respect, Google TV stands out, as games on it can be played using the Google Remote Control app on a smartphone or a third-party controller.

Clearly, all these nuances create quite a challenge for developers. Developers could solve this problem by designing games with simple or adaptive control schemes, and thoroughly testing them on different platforms 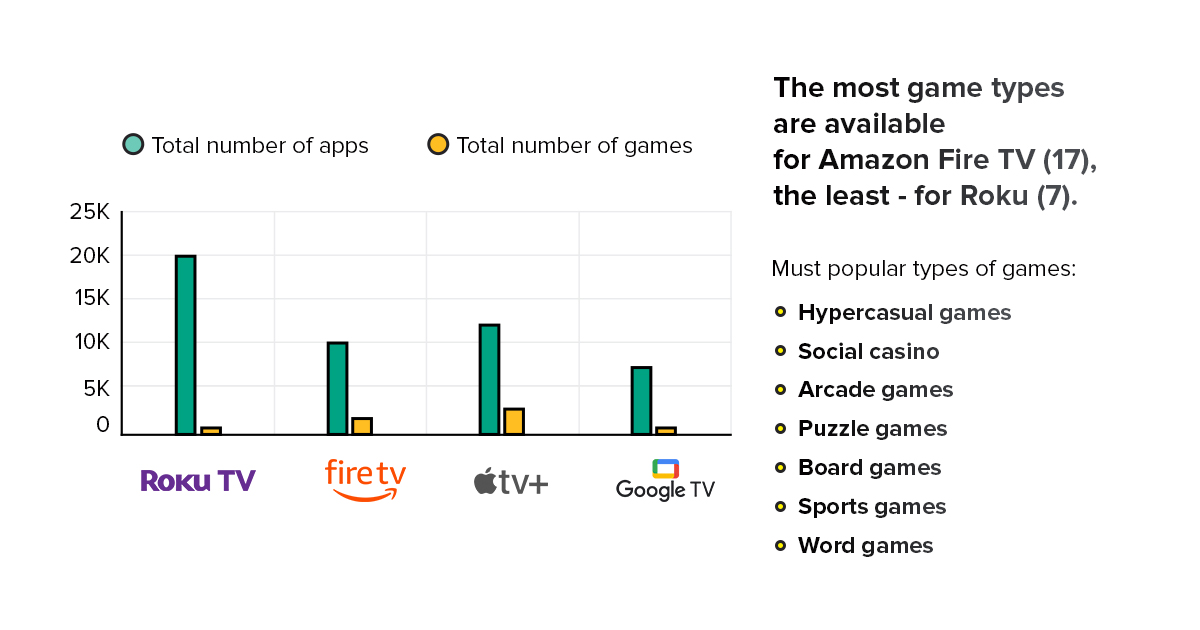 Challenge #4 Choosing a genre that works

As previously mentioned, controller limitations translate into the impossibility of all game genres functioning well on a CTV. At the same time, the so-called “hyper-casual” games, including puzzles, arcades, board games, and social casino, tend to do particularly well.

In terms of game types, Amazon Fire TV boasts 17, while Roku only has 7.

ll in all, the following game genres are present on all platforms: arcade, board, puzzle, word, sports, and social casino. As a rule of thumb, simple and relaxing games are best suited for CTVs. In my experience, social casino and hypercasual games are what viewers most enjoy from the comfort of their sofas, though there is always room for innovation. 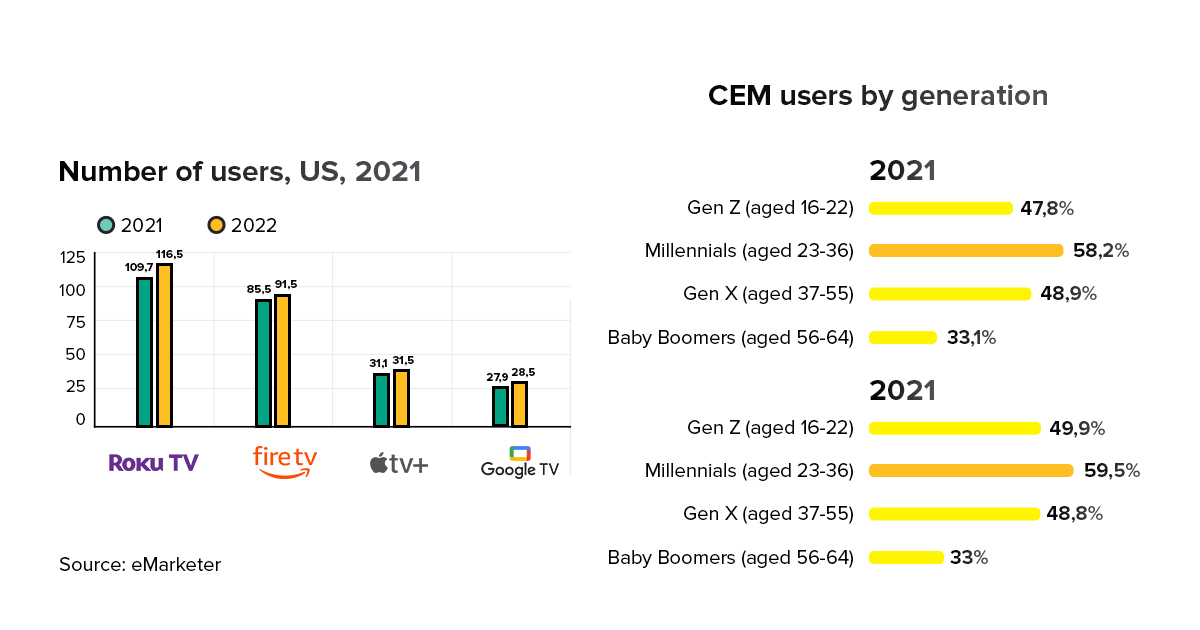 Then there is the user acquisition issue. How do you advertise your game to your target audience? Such questions have been bugging developers for a while. The problem is that statistics and tools for reliable predictions are currently hard to come by. So where can data about specific game genres be obtained?

Well, Google, Amazon, and Roku have their own CTV advertising platforms:

At this stage, Apple does not have a solution for advertising on Apple TV. A specific channel can be promoted through App Store ads on various devices. If it’s an Apple TV-only app, this needs to be specified.

Amazon Fire TV has advanced the furthest for advertising and covers a lot of major markets for ads on CTV devices.

Roku display ads are fully available only in the US, Canada and the UK.

Google TV ads currently only work in the United States.

User acquisition remains the biggest challenge for developers due to heavy reliance on the platform. With Fire TV, Amazon is taking the right steps towards helping developers reach the players. In this regard, other platforms should take note to remove barriers and promote wider adoption.

It is truly exciting to witness the beginning of the new industry, with no rules and optimized paths — everything you do has a potential to become a foundation of a future success.  But at the same time this uncharted territory contains many potential pitfalls for careless explorers. Hopefully, if developers pay heed to the above mentioned obstacles and address them, CTV gaming can live up to its promising potential.