Dos and don'ts when exhibiting your unfinished game

Presenting your game at a convention or conference always is a big challenge, especially if your game is in an early development stage. I collected some thoughts onit, collecting the most important things I learned in the past few years.
Tabea Iseli
Blogger
September 28, 2016 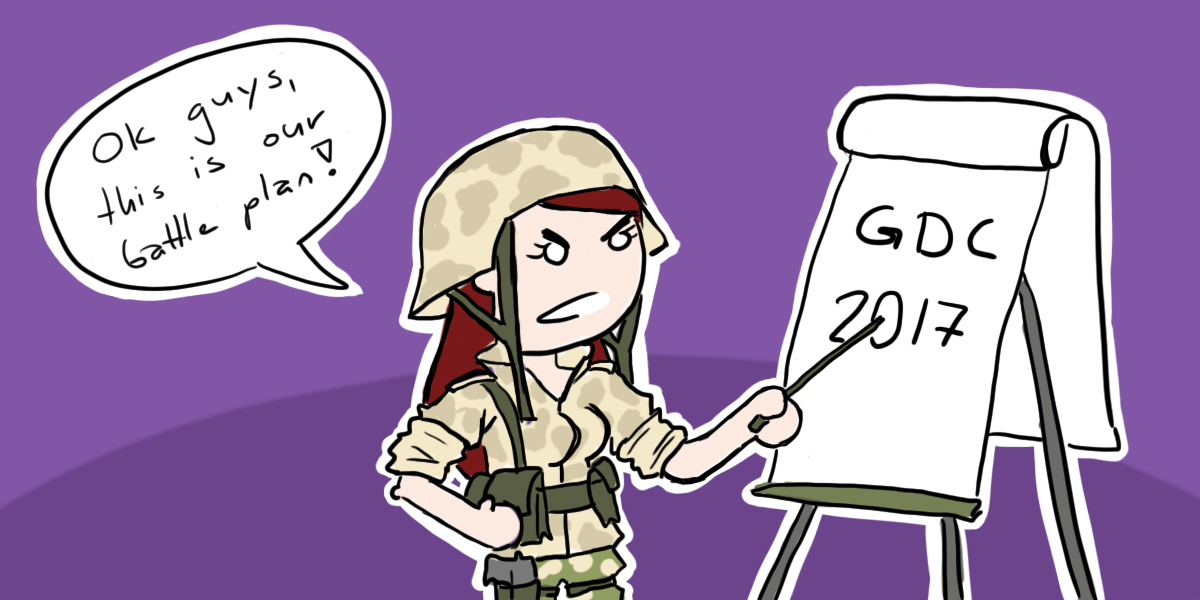 Some days ago somebody asked on Facebook what the most important dos and don'ts are if you are showing your early prototype at a convention or conference. As I started replying, I realized how many things came to my mind. So I thought it would be easier to make a post about it.

What are your goals?

Generally speaking I would always try to figure out what your goals are for the event in question. Do you want to gather feedback or do you want to speak to publishers? Don't go to an event without a plan. Seeing some guys standing around at their booth at GDC, obviously bored and without a clue what they wanna do is always kinda painful to me. Visiting GDC literally costs you several thousand dollars so if you do go, please figure out what you wanna accomplish there and prepare for it. Not only will it be better for your finances, but your experience and gainings will be so much better.
So if you wanna gather feedback, think of questions to ask the players. If you wanna meet publishers, make appointments well in advance. Trying to meet a publisher spontaneously will be almost impossible at a major event. If you wanna build a community or gather e-mail addresses for your newsletters, figure out how to do so. What can you give in exchange for that?

What is the audience?

If you are preparing your game or your demo, you should always keep in mind what your audience will be. Journalists and publishers for example are used to see games in early stages, so there is no problem in showing them unfinished stuff and they don't care about ugly UIs, placeholder models or bugs.
Players on the other hand are mostly only used to see finished products, so you probably should be a bit more careful there.

In both cases I'd recommend to try to bring out the USP or vision of your project. Make a short demo, just with the most important features that make your game... well, your game. Cut or disable features that are not finished or do not represent the core idea of your game, and use the time to work on and polish the important stuff.
A short but working demo of your vision of the project will leave a better impression than a extensive showcase where everything is kinda in there, but not really working.

Talking about your game

When talking about your game be sure that your pitch is working. Rehearse it with different people in advance. Use different versions of your pitch and note what sticks best. (Yes, I know, basic stuff, but pitching is still maybe the most important part.)
Stress the USP of your game and plant the vision in the head of the person you are talking to. What I mean by that is the way you're telling the story, what words you use. Never apologize for stuff that is not in the demo yet and try to avoid phrases like "Well, I wish X already would be in the game, but there was not enough time."
Instead swap it for a positive and visionary expression like "Wouldn't it be super fun if you were able to do X in the game?"
It's hard to explain, but it's kind of a self confident mindset that generally works better with people. Don't be afraid to be a bit cocky about how great your game is, because most people will believe you, if you say it with conviction.

Also consider cultural differences if you're showing your game in abroad. The expectations how you interact with people may vary from country to country. When I exhibitet a game in the US for the first time, I was totally caught off guard. In my experience, Americans really want you to sell your product. They want you to approach them, be open, self confident and talkative.
In Switzerland on the other hand (and that's what I'm used to) people want you to let them alone so they can play your game without you bothering them. So I usually don't stand too close to the booth, so they can approach without hesitation. Then I try to talk to them when they already were playing for some minutes.
So observing how people act and react around you probably can't be that wrong if you are in a foreign country.

Getting your material ready is almost as important as your game itself. Always bring plenty of business cards with you, as they usually get exchanged generously at conferences. When you receive business cards, always write some words about the person on them, so you remember who they were, and if you would like to talk to them again or not. When you're collecting dozens or even hundreds of business cards, you probably won't remember who was who, so this can be a huge help in the aftermath. As a lot of people do exactly that, you even could take that into account when designing your own business cards. Glossy or black cards are hard to write on for example.

But business cards are not everything. If you have a booth, think about how you can attract people. See if you can arrange for a big screen if you can afford it for example. And try to show moving images on it, so you won't waste your fancy big screen. For example you could build your trailer into your game, and let it switch to the trailer if the game is idle for some time.

When is the right time to show your game to the public?

Well, again that depends to what you want to accomplish. I for my part do have an quite elaborate schedule I'm trying to stick to for my project: While working on the prototype or proof of concept, I set up a website and social media accounts. I create some content to post, as for example concept art, a short pitch and a teaser trailer.
Next I create a minimal but representative prototype as fast as possible. This is basically a proof of concept and serves the purpose of a little showcase for investors, publishers and sponsors. I keep this very simple, just some minutes of gameplay. The rest can be done by mood boards and written concepts.
The next step is to create some buzz. I work on a more detailed demo, to  submit for awards and conferences. I think it is important that people in the industry hear about your game, so this is how.
And after that, the next iteration probably will be for the public, to build a community and gather some player feedback. So for my project, each time the demo gets longer and the audience gets broader: First only potential sponsors, then people of the industry, then the gamers.
During all those steps don't forget to collect e-mail addresses, social media accounts and other contacts to keep them posted about your game!

To wrap it up, I generally like to have a battle plan. I want to know what my goal is and what kind of audience will help me reach that goal. Don't go to an event without knowing that and preparing for that. And last but not least, enjoy yourself! Conventions and conferences are the best part about making games in my eyes, as you get to meet all those awesome people and play all those exciting games.