Greetings and welcome to another Kickstarter Conversation!  Today I am pleased to be joined by Dodo Games very own Anti A. Danilevski  who is working on their latest project Divine Space.  Welcome Anti and thank you for taking time to talk with us.
Hello!

With the slow and steady rise in the quality and acceptance of Russian made games in the West why are you turning to Kickstarter for this project? We had no choice. It was either Kickstarter or publishers. If it would be publishers http://universe-journal.com/, it wouldn’t be Divine Space, because first thing that most of them say - ‘make it with top-down view, casual arcade, with many clicks. And get rid of this a hard sci-fi idea!’. It wouldn’t be Divine Space. So either it will be Kickstarter, or no Divine Space at all.

Who’s idea was it to do a “Space Council” Kickstarter Video?  It seems like a cheesy but fun and interesting style for a Kickstarter video.
It was my idea, as a whole scenario. Our film director helped to polish it. I had to remake it though because I’ve expected this movie to be made a bit different, with better effects and not boring (as it was). After I mixed it with gameplay and different locations (some of them I didn’t want to show so early, but alas), it became more interesting and entertaining.

It’s enough money to make first version for iPads. If this version will be finished, we will have enough our own resources to make everything else by self. If we will gather more on Kickstarter, we will make them faster, if not - we will make them eventually.

Since this is going to be a free to play game why should our readers back your project now and not just wait until it’s released?

Otherwise they will wait forever - there is a 99% chance that game won’t be released without their support. Simply because we invested everything we had to make that alpha and can’t continue without additional funds. If there will be a publisher, investing in Divine Space - most likely I’ll leave because I wouldn’t want to work with someone who is money-only oriented (and most of them are).

Was it a difficult decision to design the game with “Click-and-Go” controls versus simulator/pilot controls?

It’s very simple decision, because it’s our experience many players don’t have time to master sim’s controls. Easy gameplay does not make the game simple or primitive - it just allows anyone to play it without being a hardcore player.

Do you feel there is any kind of language barrier that might prevent folks from backing you?

I don’t know, but I think it plays a role. If Divine Space would be launched by someone known in US, it would reach it’s goal in a day. We have great art and concept, interesting video, playable alpha - most of games on Kickstarter don’t have so much materials as we do.

Have folks really called you “Evil” for making a Free-to-Play game?

Yes, many people seriously dislike F2P and don’t believe that our game will be any different. This is sad, but after their experience with publishers and their pay-to-play and pay-to-win aggressive monetization systems I understand those players.

I hope that I’ll have chance to prove players that F2P can be good and positive..

Do you see the Free-to-Play model becoming the “Standard” in the years to come?

Yes, I think it’s where industry is moving to and keep my fingers crossed that it won’t be pay-to-win.


So how “Story Driven” versus “Open World” will the game be?  Will I be just following a series of storyline missions all the time or will I have the chance to wander around and do my own thing?

There will be ‘control storyline points’ where you can arrive at anytime, very much like the Fallout system. You can fly anywhere, but to move through the global story, you’ll have to find right places and meet right people... or things.

Since the star maps are based off of real stellar data how many solar systems are planning to implement in game at launch?
Currently we have 500 stars. Each can contain from zero to 10+ planets, and each planet is a location. But for launch it’s too much - there will be about 50-60 planets first. I don’t think it’s wise to make more for a small team like we are. It will be better to make few polished, interesting locations than hundred of empty, similar places.

Is Kickstarter.com providing you with all the information and metrics you want to keep track of your campaign?  Is there anything you’d want them to add?  Are you using Kicktraq at all?

Using it all. There are not many instruments that would help starters to spread the word and reach mass. In free time (not now, apparently) I and my friend are making an instrument for everyone - backers, starters, platforms - to help them reach each other. If it will go as planned, it will be a powerful instrument that will help a lot of people. Maybe beta will be working in December 2012 already. I’m really missing that, if we would manage to make it earlier, Divine Space would grow up at least twice faster.

You see, most of the problem is reaching people. They like Divine Space, but nobody heard about us.

An evolving and backer responsive campaign tends to do the best, what are you planning to do to keep the enthusiasm level up for your campaign?  Do you have a plan for more updates?  Production photos?  Interviews/discussions with the developers?

We are posting updates each second day and we have A LOT to tell our backers - but posting them more often would be annoying and spammy. So we combine 2-3 news into one update and releasing them. This interview will be in one of the updates, too. Actually, I’m trying not to post too much. 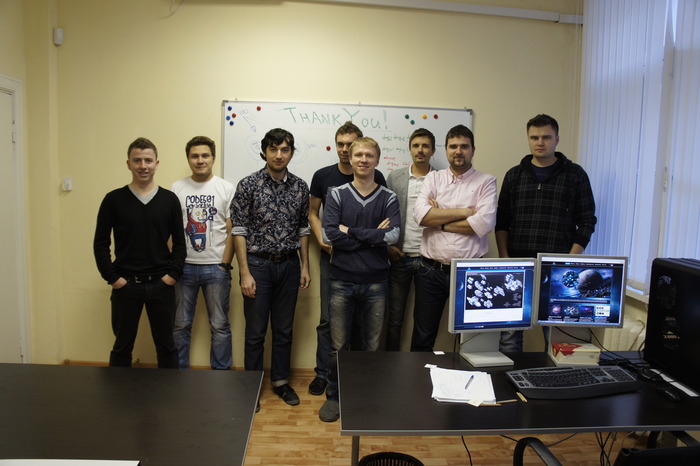 A human face is always a good thing to put onto a Kickstarter campaign.  Which of these fine gentlemen are you?
In center, in blue sweater. Hi all, this is me, and I’m the brain behind this development!

Any tips or warnings you’d give for anyone thinking of starting a Kickstarter?

A lot of tips and warnings, but I’ll write a big article after this campaign ends. You will be able to read it in my new blog about crowdfunding that I decided to start not long ago. Updates won’t be often because I usually have a very little or no free time, but this post-mortem will be there - netfunders.com/blog

There you can read about our preparations for our current campaign and what went wrong.

Well thank you for taking time out of your busy schedule is there anything else you’d like to add?

I’d like to ask everyone who read this to help us reach other people. This is most important for us to meet our goal - without your help, we aren’t going to make it.